Skip to content
Previous Next
Eoin Bradley returns to Glenavon 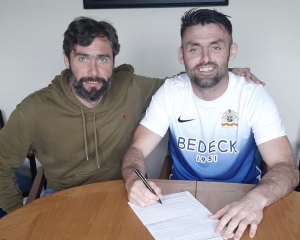 Glenavon Football Club are delighted to announce the return of Eoin Bradley to the club on a one-year deal, with the option of another year.
‘Skinner’, who joins from Coleraine, was previously with the Lurgan Blues between the 2014-15 and 2016-17 seasons, winning an Irish Cup medal during his time at Mourneview Park.
The striker also played in Europe during each of the three seasons that he spent with Glenavon and inadvertently helped us qualify for the Europa League in 2018-19! Eoin’s stoppage time goal for the Bannsiders in the 2018 Irish Cup final meant that, with Coleraine winning the Irish Cup, Glenavon qualified for Europe through their league placing.
Gary Hamilton was pleased to welcome Eoin back to the club.
“Skinner was a big part of our success during his time at the club so I’m pleased to have him back on board with us,” the Glenavon manager said.
“I know he will be a huge asset to the changing room. Eoin will bring a wealth of experience and will give us something different as we head into the new season.”

You’ll be able to hear more from Gary and also catch an interview with Eoin Bradley on our YouTube channel soon.