Skip to content
Previous Next
MATCH REPORT: Hopes of a fairytale turn into a nightmare for Lurgan Blues

There will be no fairytale cup final win for Glenavon at Mourneview Park this season, after the Lurgan Blues suffered a disappointing 2-1 first-round defeat to Dungannon Swifts on home turf on Tuesday evening.

Danny Purkis put the home side in front on 10 minutes when he tapped in after strike partner Matthew Fitzpatrick had taken advantage of an error from Swifts goalkeeper Roy Carroll.

The visitors drew level on 32 minutes when Ryan Mayse fired past Craig Hyland after being played in by Rory Patterson.

Shane McGinty scored what proved to be the winning goal in the 67th minute when he drove the ball home from the edge of the box when it fell to him following a corner-kick.

Glenavon threatened on seven minutes when captain James Singleton picked Purkis out with a low cross from the left. The striker managed to squeeze a low shot on target, but Carroll dived down to his left to make the save.

The former Northern Ireland and Manchester United goalkeeper made a glaring error to gift Glenavon the opening goal just three minutes later. Matthew Smyth played the ball back to Carroll, but when the goalkeeper tried to return it to Smyth he played it instead straight to the feet of Fitzpatrick, who in turn squared the ball for Purkis. Glenavon’s number nine had the simple task of firing into an empty net to open the scoring.

Andy Hall’s free-kick in the 20th minute found Andrew Doyle at the back post, but the defender’s shot went well over the bar.

Hyland produced a super save on the half-hour mark to deny Patterson from point-blank range when the veteran striker had been picked out by a superb cross from the right delivered by Caolin Coyle.

The Glenavon goalkeeper was unable to deny the Swifts their equaliser two minutes later, though. McGinty played a pass forward to Patterson and he hit a first-time through-pass for Mayse to run onto. The forward took one touch with his right foot before shooting with his left. Hyland did manage to get a touch to the ball, but it wasn’t enough to prevent it from finding the net.

Sean Ward let fly with his left foot from distance on 39 minutes and the ball went narrowly wide of Carroll’s far post, with the big goalkeeper at full stretch diving to his right.

Two minutes before the break, Hall curled a free-kick towards goal and it went narrowly over the bar. Carroll, though, had it well covered and was happy to leave the ball and allow it to go behind.

Dungannon came out the stronger side in the second half, and they really should have gone ahead through Caolan McAleer on 62 minutes, but the midfielder flashed his shot wide of the far post when well positioned in the Glenavon penalty area.

However, just five minutes later the Swifts did take the lead. A corner from the right was only cleared to the edge of the box, where it fell to McGinty. He fired a low shot past Hyland and inside the left-hand post to edge the away side in front.

Glenavon’s challenge to get back into the game became all the more difficult in the 69th minute when Snoddy was shown his second yellow card in the space of less than five minutes, followed by the inevitable red.

Truthfully, ten-man Glenavon didn’t really threaten the Dungannon goal in the remaining 20 minutes, as Dean Shiels’ side comfortably held on to book their place in the second round.

It’s back to league action for the Lurgan Blues on Saturday (1st May), as they travel to the Warden Street Showgrounds to take on Ballymena United in what’s a very big game in the race for seventh place, and the final European play-off spot.

MAN OF THE MATCH SPONSOR: The Sinnamon Family 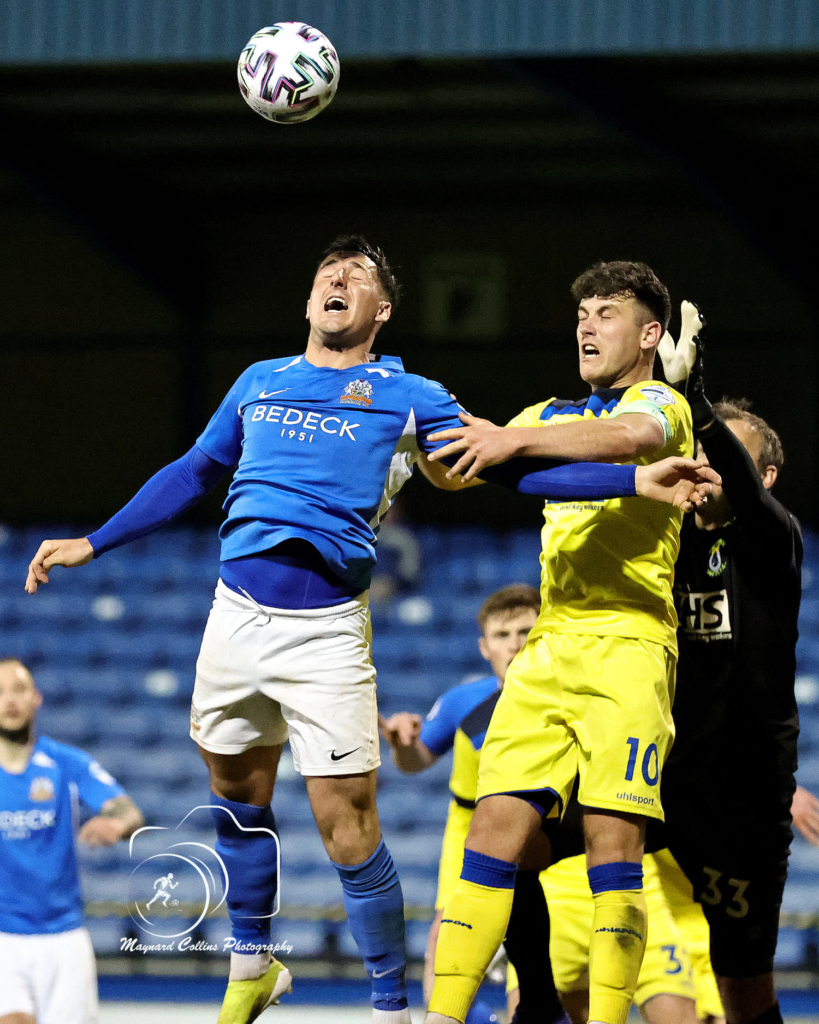 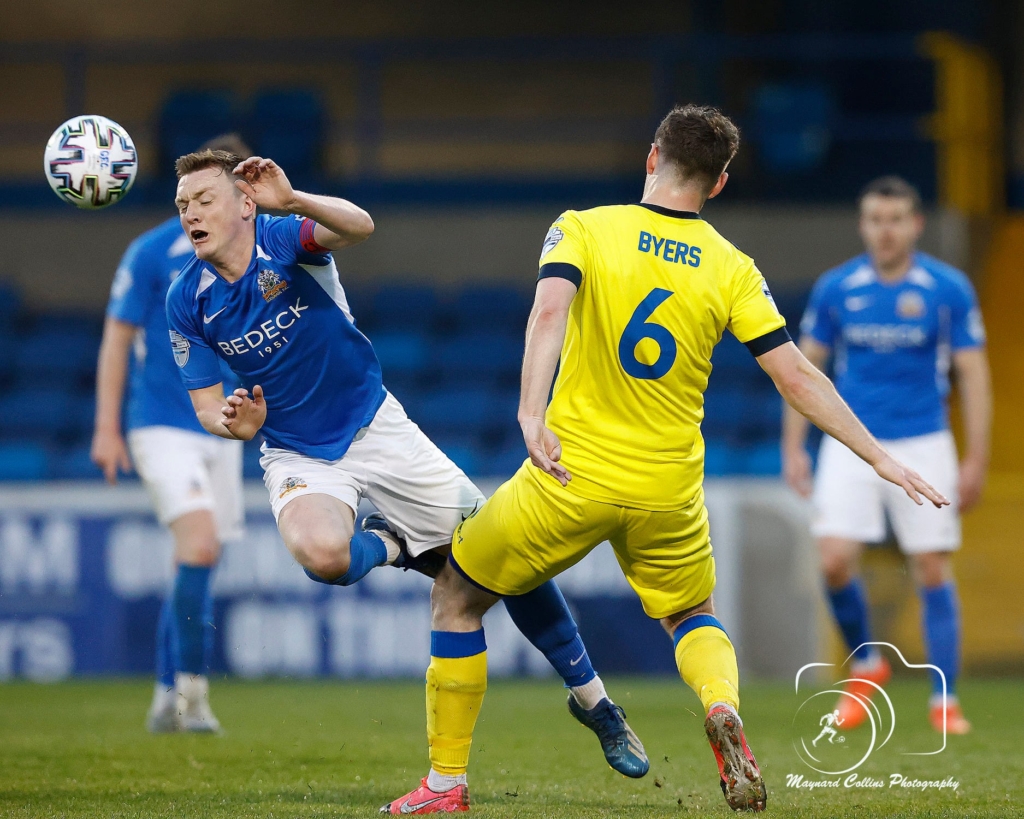 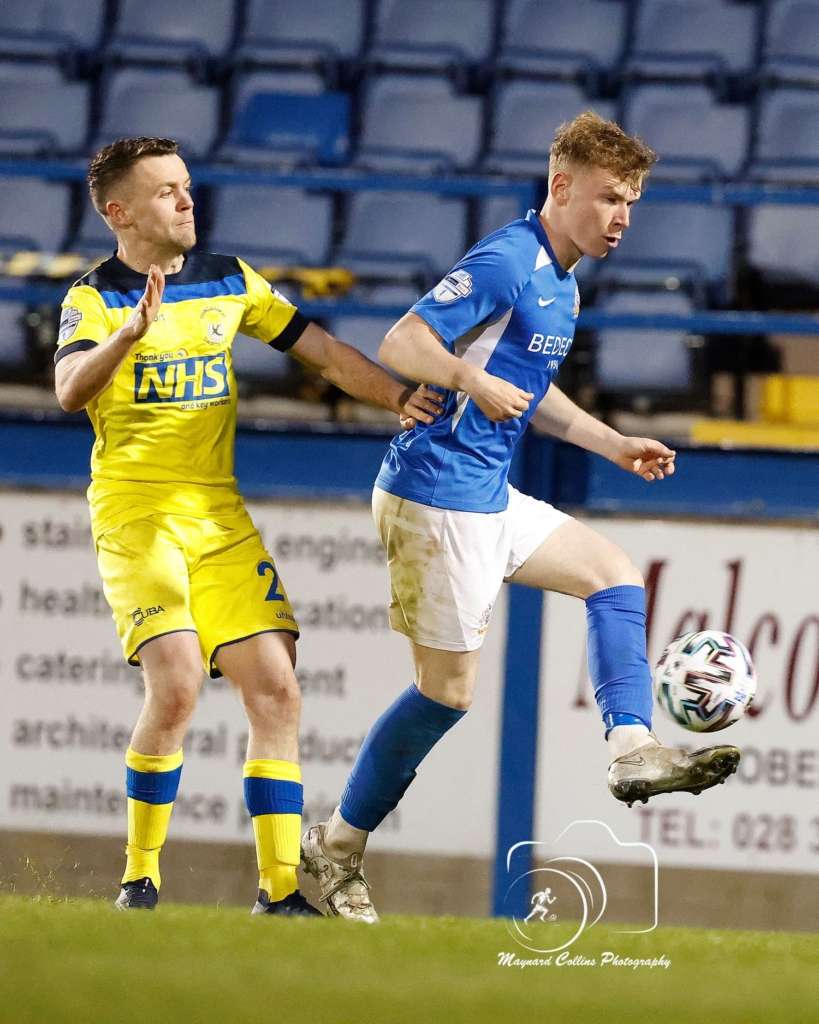