The visitors took the lead on 21 minutes when the impressive Lee Lynch fired home from the edge of the box.

The home team equalised five minutes later when Michael O’Connor converted from the penalty spot after Albert Watson had handled a Conor McCloskey cross, and the sides remained level at half-time.

However, Larne went through the gears in the second half and took the game away from Glenavon, captain Jeff Hughes restoring their lead on 50 minutes when he scored from a Mark Randall free-kick.

Ronan Hale then doubled the away side’s advantage in the 59th minute, collecting a superb through-ball from Randall and calmly slotting past Glenavon goalkeeper Craig Hyland.

Substitute Andrew Mitchell wrapped up the three points for Larne on 83 minutes when he scored a spot-kick following Andrew Doyle’s foul on Hale.

Larne dominated the early stages of the game, and in fact they went very close to opening the scoring inside the first minute. Goalkeeper Hyland’s poor kick out gifted the ball to Lynch and he quickly fed it forward to David McDaid. The striker’s shot had beaten the Glenavon keeper and was headed for the net only for Doyle to make a superb sliding block to deny an opener.

McDaid was involved again five minutes later when his pass found Hale on the left side of the penalty area. The forward came inside and fired a low shot towards the far corner. This time Hyland made a super save, diving down to his left and pushing the ball round the post.

The keeper made another good stop on 11 minutes when he got out quickly to narrow the angle and smother a shot from McDaid, who had bundled his way past Matthew Snoddy.

Glenavon’s first meaningful effort came from Danny Purkis in the 14th minute. The striker found the target with his low shot, but Larne goalkeeper Conor Devlin made an easy save.

The visitors eventually got the goal their dominance deserved in the 21st minute. Hale slipped a short pass inside for Lynch and he hit a well-struck shot with his right foot which found the top corner. Hyland did manage to get fingertips to the ball but he couldn’t prevent it from hitting the back of the net.

Going behind seemed to spark Glenavon into life, and the Lurgan Blues hauled themselves level just five minutes after conceding the opening goal. McCloskey crossed a ball from the left which struck the arm of Watson and referee Ross Dunlop pointed to the spot. O’Connor stepped up and sent Devlin the wrong way to make it one apiece.

Having drawn level, Glenavon grew into the match more and more as the first half wore on, and with the scores still even at half-time, it looked like it was anyone’s game in the second period. However, Larne quickly went up a level after the break and simply took the game away from Gary Hamilton’s men.

Captain Hughes put the Inver Park side back in front on 50 minutes in somewhat fortuitous circumstances. Randall whipped in a free-kick from the left flank which Hughes got on the end of, but although the midfielder failed to make a clean connection with his head, the ball looped over Hyland and dropped into the net nevertheless.

Larne doubled their lead nine minutes later through the dangerous Hale. Randall played a sumptuous ball through for the forward and he calmly slotted past Hyland with a low first-time shot with his right foot to grab the goal his performance warranted.

McDaid nearly scored with an audacious chip on 68 minutes, but the ball drifted narrowly wide of the left-hand post.

The striker went close again six minutes later when he cut in from the left and fired a right-footed shot wide of the opposite post.

Glenavon didn’t really threaten at all as the game entered the closing stages, and it was unsurprising to see Larne add a fourth goal. Doyle was adjudged to have fouled Hale inside the box in the 82nd minute and substitute Mitchell stepped up to take the penalty. He confidently slotted home what was almost a carbon copy of O’Connor’s earlier spot-kick, sending Hyland the wrong way to wrap up a comfortable three points for second-placed Larne.

Glenavon remain in ninth spot in the standings, and the Lurgan Blues welcome fifth-placed Ballymena United to Mourneview Park on Saturday (6th February). Kick-off is at 3pm.

Man of the Match Sponsor – Barry Craig and Ethna Ferron 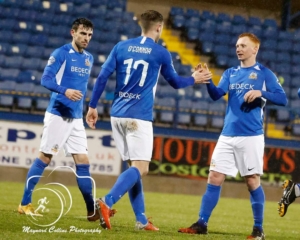 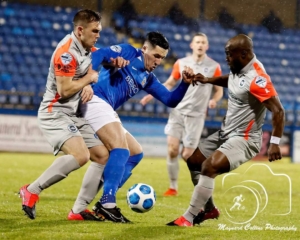 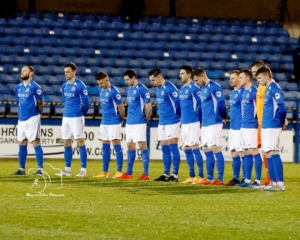 A minute’s silence was held in memory of our former director, Noel Hayes. 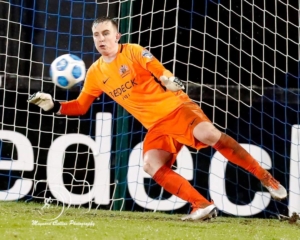 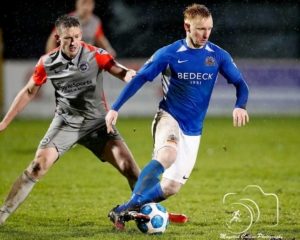 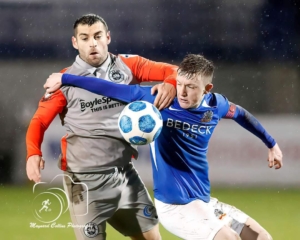 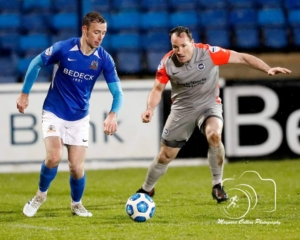 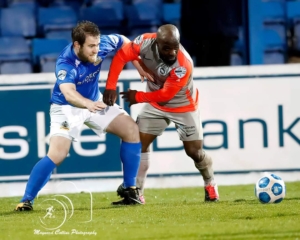