GLENAVON are delighted to welcome a further two new signings to the club.

The club moved to sign centre back Lee McNulty from Dergview, while striker Josh Doyle joins the club from Bluebell United in the Leinster Senior League.

Speaking to the club website today, Gary Hamilton said he was delighted to get Lee’s signing over the line. 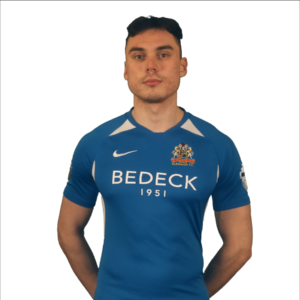 “Lee played for Dergview against us in pre-season and after the game I spoke to Ivan Sproule about him,” said Gary.

“Since Daniel Larmour made his decision to sign for Crusaders on a pre-contract we’ve been looking to get centre backs and unfortunately we haven’t been able to get one in that has been playing week in, week out. They just aren’t out there and clubs don’t want to let players go because they’re all in the same boat.

“When we saw him in pre-season he was big, he was quick and he was physical. He did really well against us and we thought there was potentially there. We’ve taken a gamble on him but from our point of view it was an educated gamble.

“Ivan Sproule talks about him very, very highly and if anyone can give you a recommendation on a player it’s him, given his career.”

With the number of games coming up, Gary says that any boost to squad numbers has to be welcomed.

“We’re down to Coatesy and Doyler who, no disrespect to them, are not going to be able to play every Saturday and Tuesday for the next seven weeks. Doyler has issues with his knee at times and Coatesy is getting on in years.

“We’re looking at bringing in another centre half because we know that we have to be on the safe side in that position. We also have Wardy who can fill in there but hopefully we can get something else tied up before the window shuts.”

Gary also felt that it was important to add to the squad defensively following Daniel Larmour’s news.

“I said before I only want to play players who want to be here long-term,” he said.

“I’m trying to build something at Glenavon Football Club and I only want players who want to be part of that. It’s nothing against the other players – they can make their decisions about where they want to play t`heir football because that’s the right of a footballer.

“But I’ve been there as a player when I signed a pre-contract to join Glentoran from Portadown, as was Kyle Neill and also Paul McAreavey when he went to Dundalk – no matter what anyone says, when you sign for another club you have doubt in your head about getting injured. You don’t want the risk and if you have any doubt in your head, as much as you can say you’ll be committed, you’re not going to be doing the same things. It’s human nature.

“I want players who are going to put their neck on the line and do what it takes to make this club successful. I think it’s very difficult for any player to do that when their mind is on another club.

“Daniel and Tuffers are great lads and I have no problem with it. But at the same time I’m the manager of the football club and I have to look after Glenavon Football Club.” 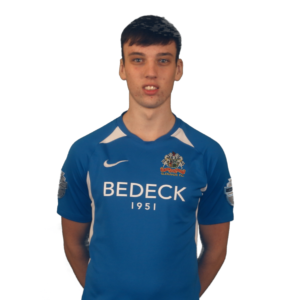 Josh Doyle has joined the club from Bluebell United.

An 18-year-old striker, Josh joins the club from Bluebell United in the Leinster Senior League. He comes highly rated, having found the net on 22 occasions in his last 10 games!

You can see interviews with both Gary and Josh, as well as an interview with our new goalkeeper Craig Hyland, later this evening.

Gary urged fans to be patient with his new signings, who haven’t played in a number of months due to the restrictions on sport due to the pandemic.

“These players are going to make mistakes and they aren’t going to be sharp. I’d plead with our fans to give them patience. It’s not like when we’ve signed players like Steo Donnelly – these guys are coming in, they’re not fit, they’re not sharp and it’s not like we can wave a magic wand to make them match fit or give them game time.

“One thing is for sure though, they’ve all got pedigree and talent. The game time is the one thing that they are lacking in.

“It’s unfortunate that there is no football being played in the leagues that we would look at either to sign players from or to loan players to. It’s a surreal situation, as the world is at the moment.

“These guys have hunger – it’s not as if they are here for money. They’re getting paid relatively low wages and they’re making a commitment to drive up the road from Dublin and in Lee’s case Enniskillen. It’s not as if they’re driving 20-30 minutes up the road. They’re coming up here twice a week and a match on a Saturday as well.

“If they prove themselves over the next four months then there will be a contract for them at the end of the season.”