Skip to content
Previous Next
Match report: Glenavon unlucky not to get something from Inver trip

A late winner by Johnny McMurray denied Glenavon a deserved shared of the spoils at Inver Park on Saturday.

Gary Hamilton, who was watching from the stands while he continued to serve his suspension following his sending off at Linfield, will have been pleased by the effort and level of performance put in by his side.

The visitors were forced into making one change, with Matthew Snoddy coming back into the starting line-up with the injured Peter Campbell dropping out. Jack O’Mahony switched to the left side of midfield with Snoddy taking his place on the right.

Jonathan Tuffey made his 200th appearance for Glenavon, while for Robbie Garrett it was his 50th – 48 starts and two sub appearances seeing the midfielder reach the landmark.

Glenavon started positively and had the first chance of the game, albeit a half chance, on 10 minutes. Michael O’Connor tried to deceive Conor Devlin with a looping free kick when everyone else was expecting a cross, but in the end there was too much height on his attempt from 35 yards out.

Mark Randall could have put the Inver Park side ahead when Lee Lynch made a good run down the right hand side and pulled the ball back to the midfielder, but his shot was sliced wide of the target.

Larne could have gone in front on 32 minutes when an inswinging corner by Randall was met by John Herron’s head, but again the opportunity went wide.

Seconds later an O’Connor free kick from deep inside the Larne half found Andrew Doyle, who was outstretched on the byline to keep the ball in, with Larne defence having to react quickly to clear for a corner before Danny Purkis could turn it into the net.

Davy McDaid missed a golden chance to put the hosts in front six minutes from half time when a good ball in from Marty Donnelly down the right was set up perfectly for the dangerman, but he was unable to covert the chance into a goal.

Fuad Sule was booked for a tackle on Purkis on the edge of the Larne penalty area which led to Glenavon having the last action of the first half. O’Connor took the free kick, lobbed Devlin and found the top left hand corner to send Glenavon into the interval in front.

Glenavon conceded two bookings as the second half got underway, Ward for a tackle on Randal and Larmour for bringing down Sule on the edge of the back. From the latter incident Donnelly took the free kick at the edge of the box, but his effort went over the bar.

Glenavon had a claim for a penalty when O’Connor was brought down but referee Steven Gregg was not interested in the protestations coming from the men in blue.

Donnelly had another other opportunity when the ball broke for him down the right hand side, but his effort was blocked. From the resulting corner Josh Robinson headed over.

O’Mahony was unlucky not to double Glenavon’s lead as a frantic start to the second half continued. Garrett headed the ball down on the right hand side for the winger to have a crack, but his powerful shot went over. Shortly afterwards Purkis tried his luck from distance but Devlin got down to it.

Larne brought on Ronan Hale and Jeff Hughes with around 20 minutes to go and it was the former who put the visitors back on level terms with a wonderfully struck curling shot from 25 yards out.

And it was another sub who snatched the three points for Larne on the stroke of 90 minutes when Jonny McMurray took a great touch down the right hand side and rifled the ball home to send Glenavon home empty handed.

Right at the death Glenavon were reduced to 10 men when Ward, having been brought down by Johnny McMurray, received a second yellow card. He seemed to do little more than stand up after being found, while McMurray, who was also booked, was seen to get into the defender’s face. Andrew Doyle also received a booking, seemingly for dissent. 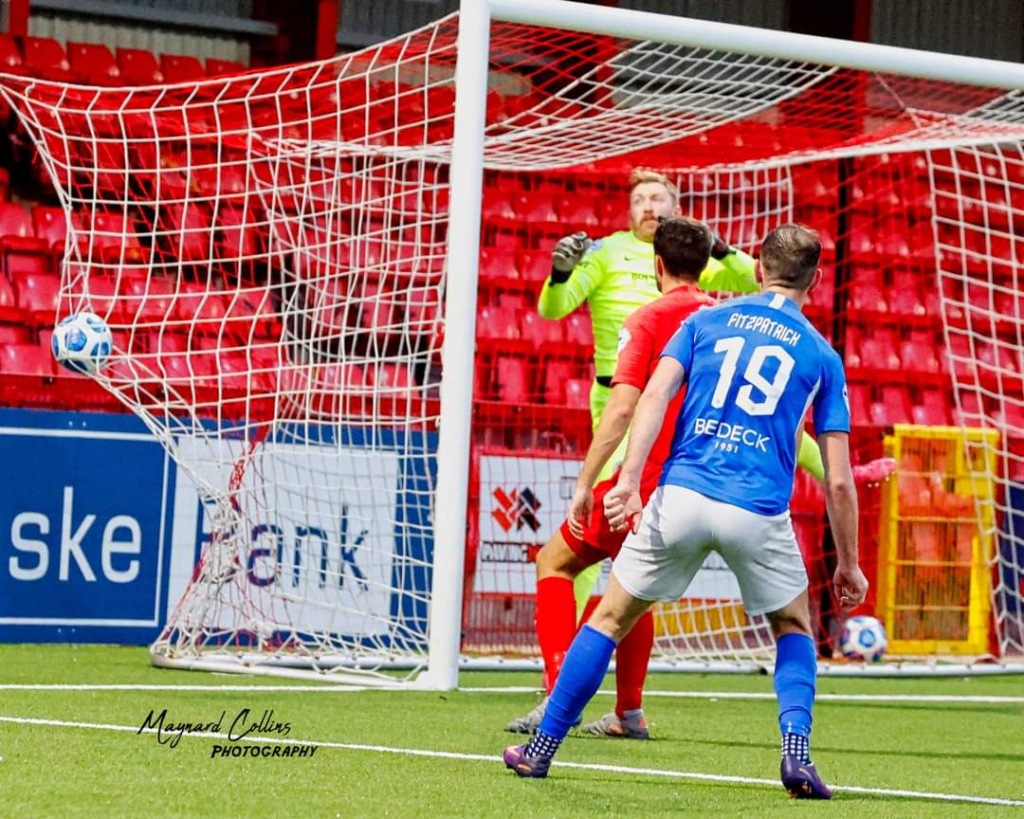 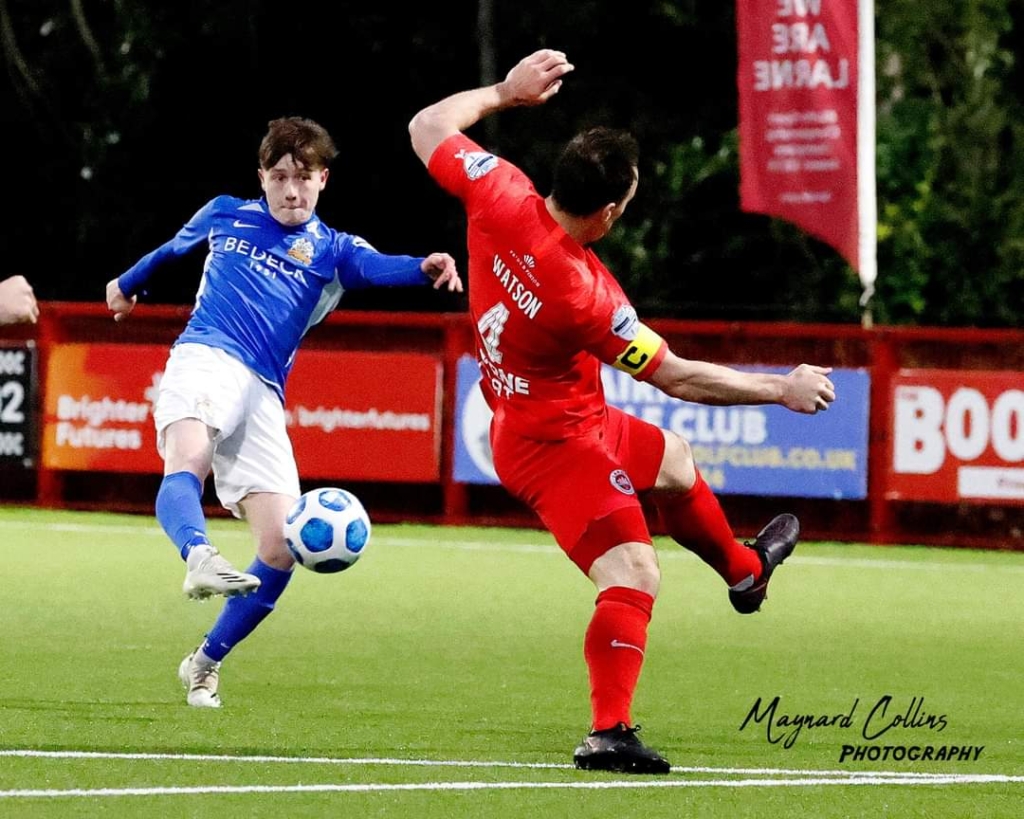 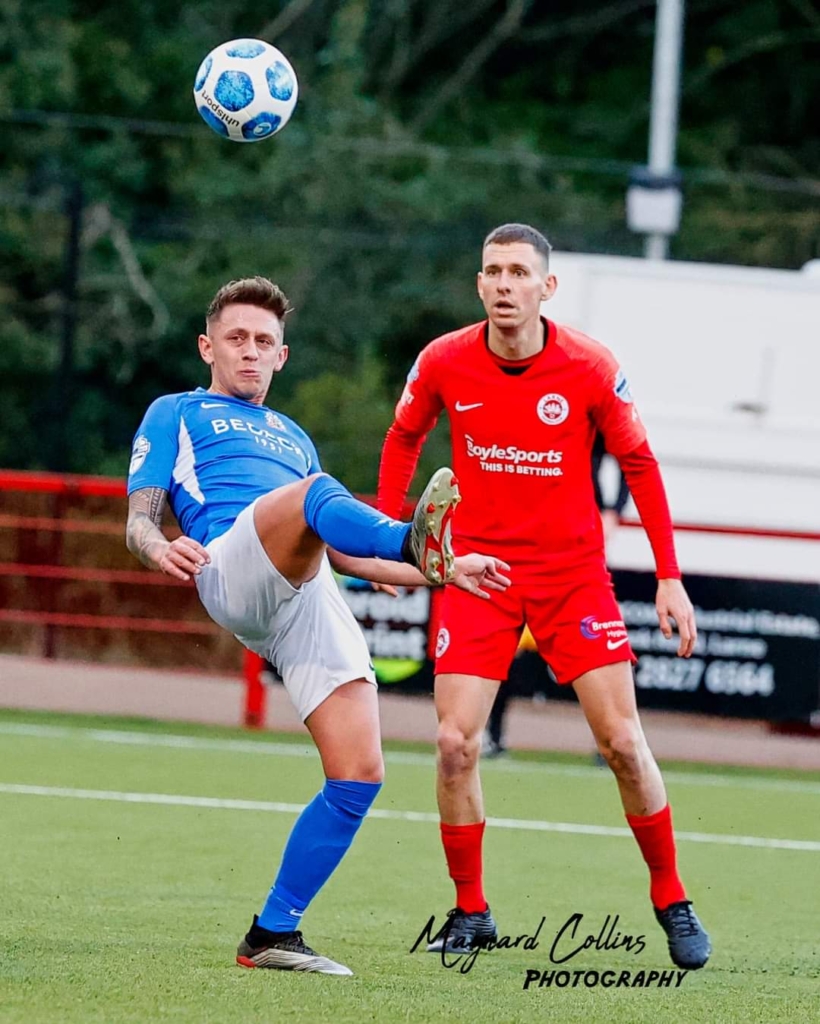 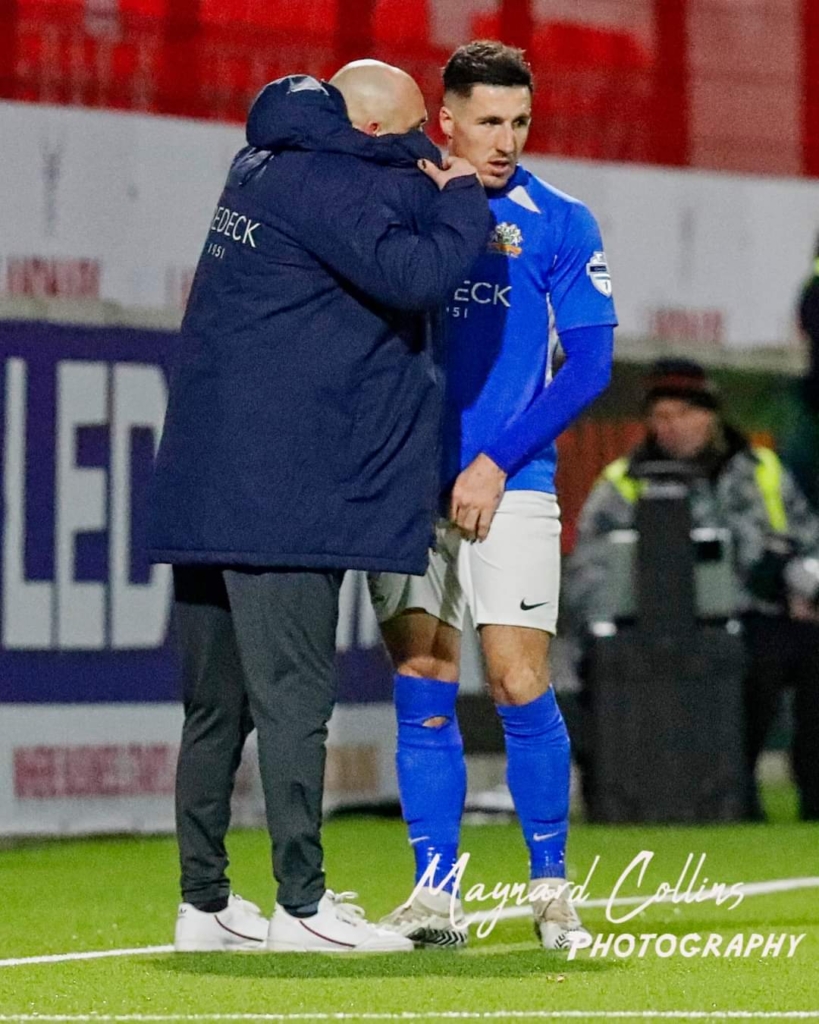