If Glenavon are going to build upon last week’s excellent win over Crusaders, they’re going to have to do it against the top side in the country at the moment.

Larne went top of the Danske Bank Premiership last Saturday following their win over Coleraine at the Showgrounds and Linfield’s defeat to Warrenpoint Town.

The Inver Park side will be in buoyant mood, having won their first trophy in 33 years on Wednesday night, having beaten Glentoran on penalties in the County Antrim Shield final.

However, the fact that Tiernan Lynch’s side have had to play an extra 90 minutes counts for nothing, according to Glenavon manager Gary Hamilton.

He said, “It’s not like they’ve played in a cup final and then had to go to work the next morning and then come to train on a Thursday night.

“They’ll have have done warm downs, they’ll probably have done a recovery sessions and it won’t make a difference to full-time players.

“It’s a thing I laugh about all the time because you see in England that managers complain about playing Saturday-Tuesday and Saturday-Wednesday and about the amount of games they’re playing and the effect it’s having on their players. You’re full time and you can recover properly and those players and managers are still complaining about it.

“We’re part time and clubs like ourselves, Ballymena or Warrenpoint, for example, are required to do it and our boys are going to work the next day and working a full day, not getting a recovery and you don’t hear us complain about it.”

While Larne will be well prepared for Saturday’s game, Gary believes that last week’s win over the Crues showed just what we can achieve if we are on top of our game.

“It’s going to be a difficult,” he admitted.

“Larne are top of the league, having overtaken Linfield. They’re probably the only proper full-time outfit in that they go in in the mornings, get their breakfast, train, they have their lunch, they have a couple of afternoon sessions a week – they do everything properly.

“Crusaders are doing it, but in a different way however our boys went out and got a great result so it shows you that it’s possible.

“More times than not those teams will win but if you go into the game with the right attitude and you get a bit of luck then anything is possible – our result last week proves that.

“We go into the game off a decent run bar the Linfield game and the Portadown game. We’ve performed well in a lot of matches and the boys need to do that again if they are to stand a chance of getting anything from the game.”

They will also have to do it without one of last week’s star turns. Peter Campbell, who pulled up in training last night.

“It seems like every time we get a good result we’re unable to play the same team the following week!” quipped Gary.

“Peter was exceptional for us on Saturday so that’s a blow.

“Andy Hall isn’t available as he’s going in for another operation. Conor McCloskey still isn’t available, nor is Calum Birney but Colin Coates will come back into the squad, as will Matthew Snoddy.” 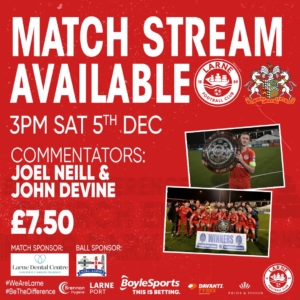 Saturday’s game at Inver Park is being played behind closed doors due to the current COVID-19 restrictions, however, Glenavon fans can still see the game on 247.tv/niprem for £7.50. Former Glenavon defender, John Devine will be part of the commentary team.