Glenavon and Ballymena United played out a scoreless draw at Mourneview Park on Saturday.

In the seventh minute Bobby Burns picked up a poor clearance from Ballymena goalkeeper Thomas McDermott and drove forward, but his shot was poor and went harmlessly wide of goal.

Three minutes later Burns swung in a corner from the right which Simon Kelly rose to meet, but the centre-half’s header went wide of McDermott’s right-hand post.

On 15 minutes the visitors threatened through Leroy Millar after some excellent build-up play. Kofi Balmer played the ball to Fra McCaffrey, who then played a clever one-two with Matthew Shevlin to get clear on the left flank. McCaffrey slipped a pass into the penalty area to find Millar. With Andrew Doyle at his back, Millar took one touch to create space for himself before firing a low left-footed shot across goal which went narrowly wide of Jonathan Tuffey’s far post. 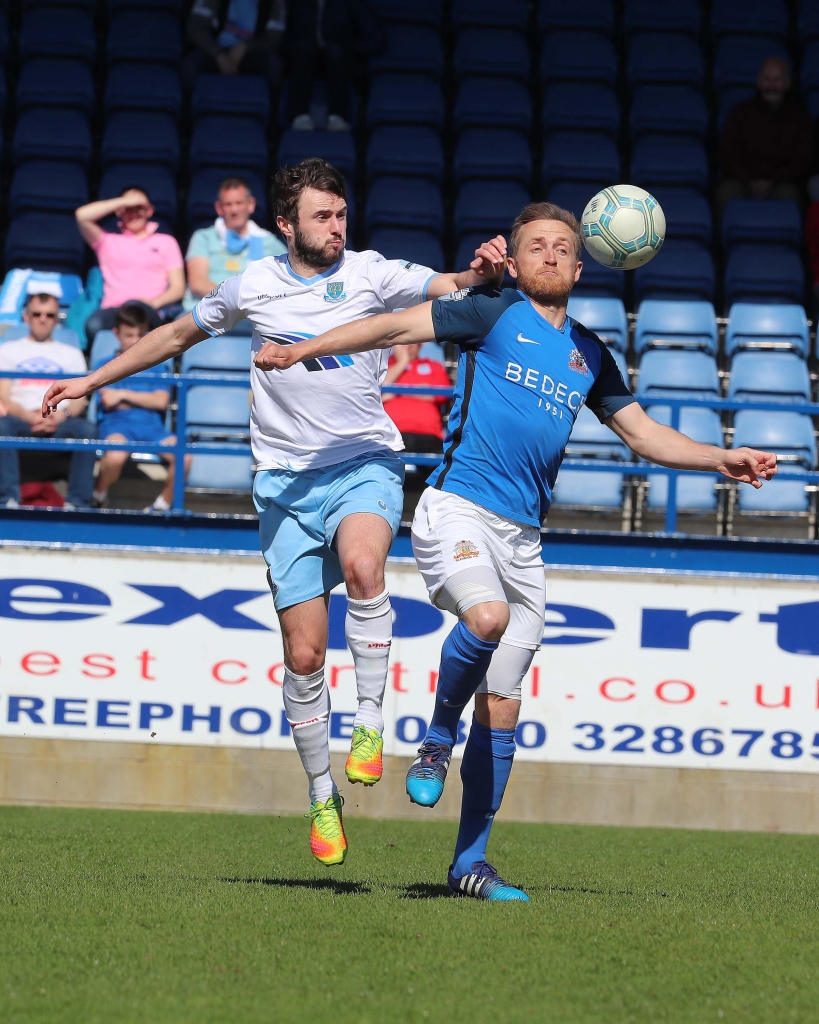 Both sides threatened to break the deadlock before half-time. First Ballymena’s Kyle Owens forced Tuffey into a save from a 25-yard free-kick. The Glenavon goalkeeper moved to his right to push the ball round the post.

Ballymena got two corners in quick succession, and from the second of these Owens found himself with another opportunity, but his shot was blocked by Kelly.

One minute from the break Andy McGrory came closest to scoring. Rhys Marshall took a throw-in on the right to find McGrory on the edge of the Ballymena penalty area. After McGrory had returned the ball to Marshall it broke kindly for the winger and he fired a shot in with his right foot which was destined for the bottom corner. Ballymena captain Jim Ervin made an excellent clearance on the line to deny the Lurgan Blues.

Two minutes into the second half Glenavon had a penalty appeal for handball against Ballymena defender Jonathan Flynn turned down when Marshall tried to send a cross in. 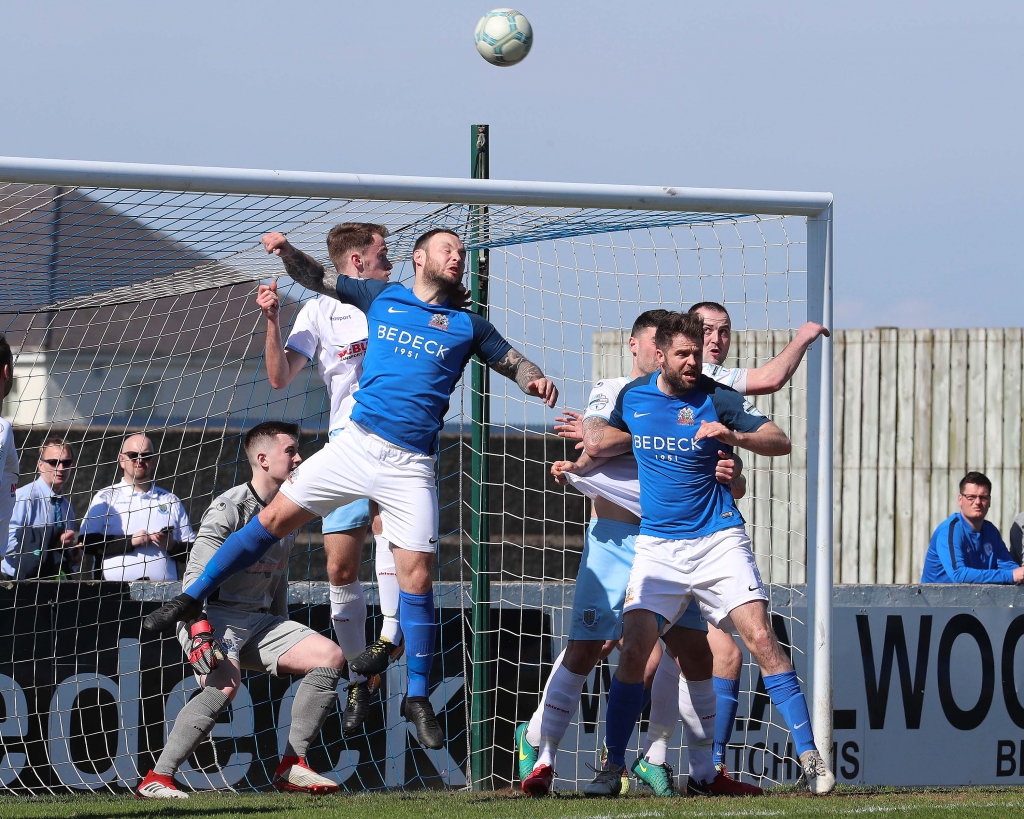 Andrew Doyle and Simon Kelly try to get on the end of a set piece in the Ballymena penalty area. (Photo by Maynard Collins.)

Ballymena’s best chance of the game arrived in the 65th minute. Millar floated a corner to the back post and picked out the head of Owens. The Crusaders-bound defender sent his effort wide when he really should have scored.

At the other end Glenavon had a corner of their own three minutes later which Burns delivered. Marshall got on the end of it but he couldn’t direct his header goalwards.

Ten minutes from time Andrew Mitchell had a half-chance for the home side. The ball fell for Mark Sykes following a corner from substitute Andrew Hall. Sykes played the ball back into the penalty area and found Mitchell. The striker spun and got a shot in, but his effort sailed over the bar.

The Lurgan Blues’ top scorer had a much better opportunity to score a couple of minutes later. Hall whipped in one of his wicked trademark crosses from the right to pick out Mitchell, who had managed to get in front of Owens, but he couldn’t find the target with his header. 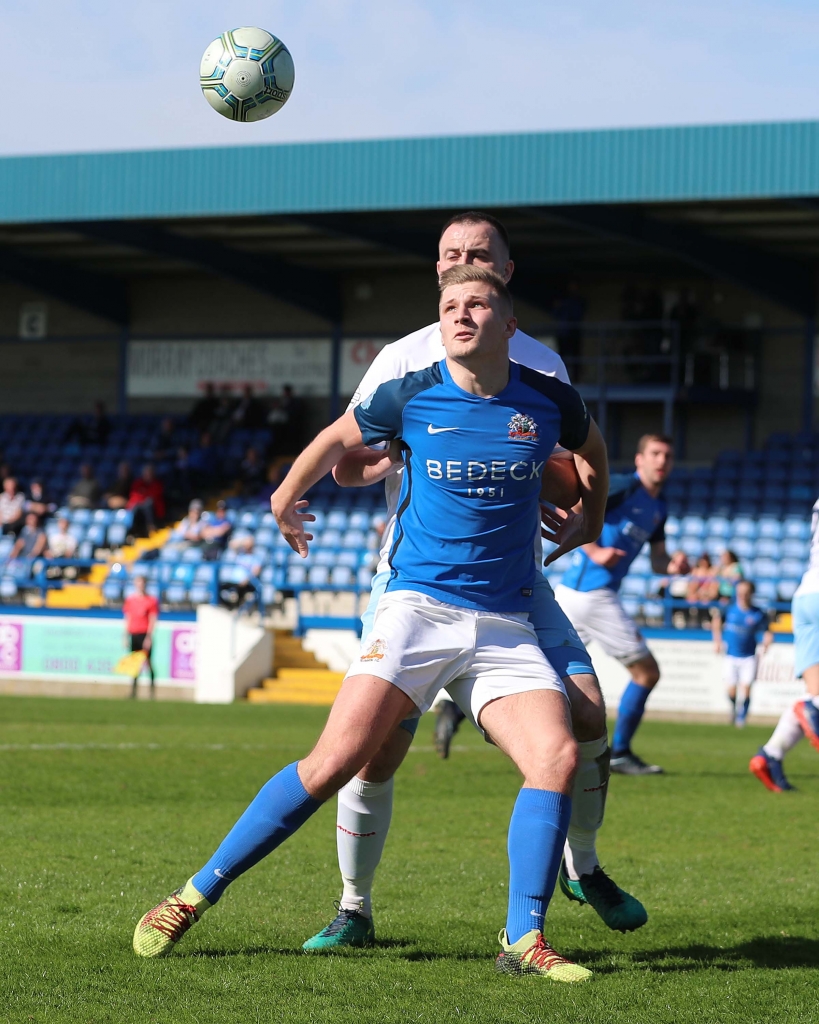 Hall had two late efforts from free-kicks which struck the Ballymena wall, and the game finished goalless.

With all three of the games in Section A ending as draws at the weekend, it’s as you were in the top half of the Danske Bank Premiership table heading into the final round of fixtures.

Glenavon remain one point clear of fourth-placed Linfield, knowing that a victory in their closing match will guarantee them the third-place finish which may be enough to secure automatic European qualification.

However, the Lurgan Blues welcome title-chasing Coleraine to Mourneview Park next Saturday (April 28th) for that final fixture. With the Bannsiders locked on 88 points with Crusaders at the top of the table and desperate to secure their second Gibson Cup crown, Glenavon know that they will need to be at their best if they are to have any chance of defeating Oran Kearney’s side.