Sammy’s at the double to give Blues early Christmas present 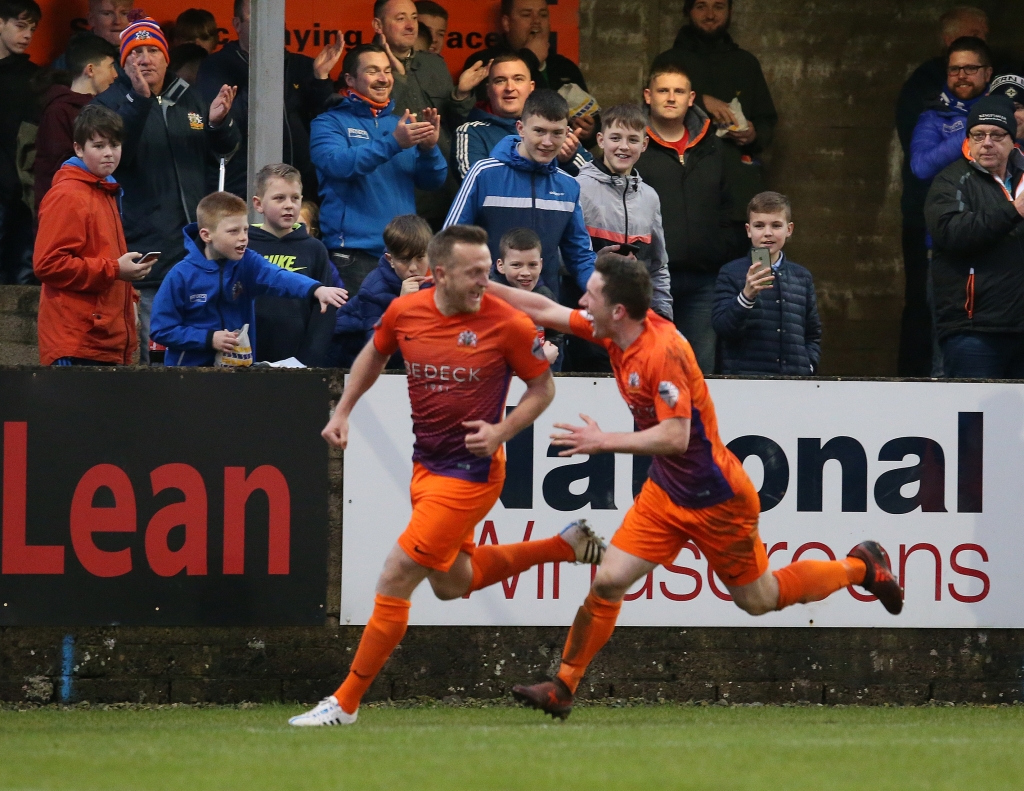 Sammy Clinghan races away after scoring against Dungannon Swifts.

A Sammy Clingan double helped Glenavon earn a comfortable 3 – 0 win away to Dungannon Swifts on Saturday which saw them move back up into third place in the Danske Bank Premiership table.

Mark Sykes opened the scoring midway through the first half, before his midfield partner Clingan doubled Glenavon’s lead from the penalty spot early in the second period following a foul on Bobby Burns by Dungannon defender Liam McMenamin.

The visitors saw left-back James Singleton dismissed for a second yellow card on 62 minutes, but Clingan made sure of the three points in the 74th minute when he curled a delightful free-kick past Swifts keeper Stuart Addis.

Glenavon created a number of opportunities early in the game. First Singleton headed over a Burns corner in the fourth minute, then the excellent Rhys Marshall saw his header blocked from another Burns corner four minutes later.

On ten minutes Marc Griffin shot narrowly wide when the ball was pulled back to him by strike partner Andrew Mitchell.

The hosts also threatened, with Ryan Mayse having a couple of efforts on goal. One was a right-footed drive which flashed over the bar, the other a low left-foot shot that was comfortably held by Jonathan Tuffey. 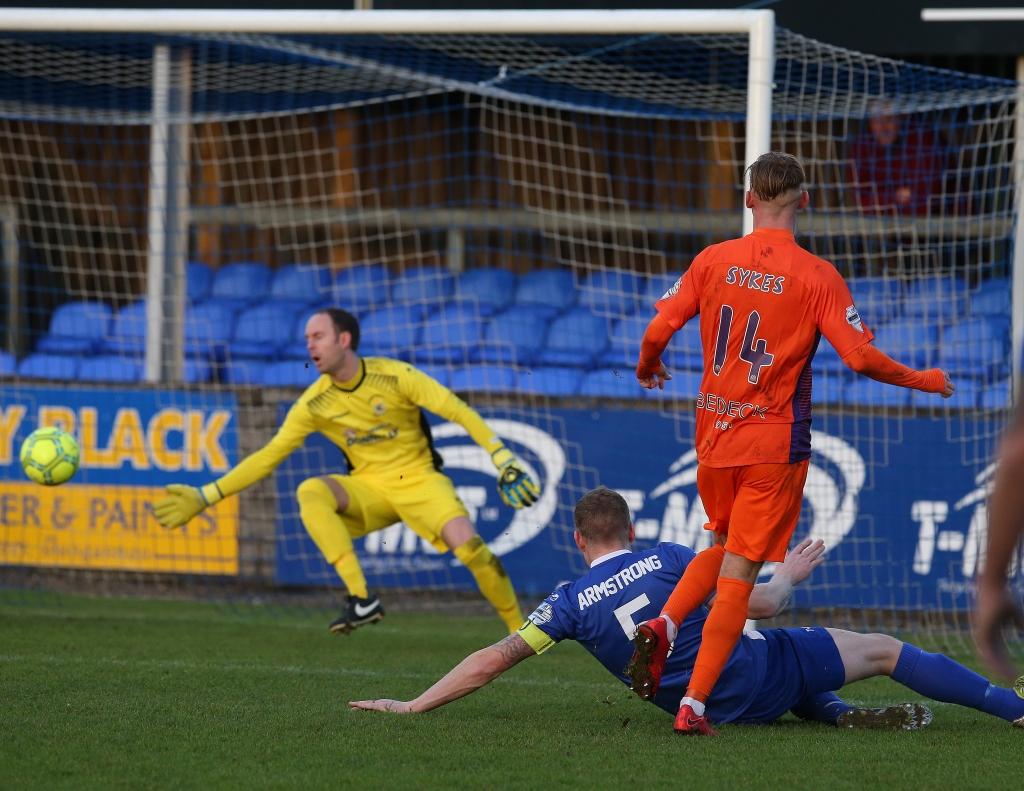 Mark Sykes slots home past Stuart Addis to give Glenavon the lead.

But Glenavon’s superiority finally told on 21 minutes, and it was Sykes, back in the team after sitting out the 4 – 3 defeat to Crusaders due to suspension last weekend, who broke the deadlock. Mitchell flicked Marshall’s throw-in on with his head for Sykes to run on to. With his first touch the young midfielder flicked the ball up with his left foot, then with his second he buried a volley past Addis and into the far corner with his right foot.

Glenavon came close to doubling their lead just a couple of minutes later when Clingan’s free-kick came off the head of a Swifts defender and rattled against the crossbar, while the hosts might have equalised just after the half-hour mark but for a smart Tuffey save from Grant Hutchinson’s well-struck shot from 20 yards.

Singleton came close in the 35th minute, rising at the back post and heading into the side-netting from Burns’s corner, then five minutes later Clingan saw his left-foot shot from 25 yards go narrowly over the bar.

The Lurgan Blues doubled their lead less than five minutes into the second half. Griffin flicked a header into the Swifts box and Burns ran on to the ball. When he went down under the challenge of McMenamin, referee Raymond Hetherington pointed to the spot. Up stepped the ever-reliable Clingan to send Addis the wrong way and make it 2 – 0.

On the hour mark Dungannon could have pulled a goal back but for a superb tackle from Caolan Marron to deny Johnny Lafferty after a free-kick had been played into the box by McMenamin. 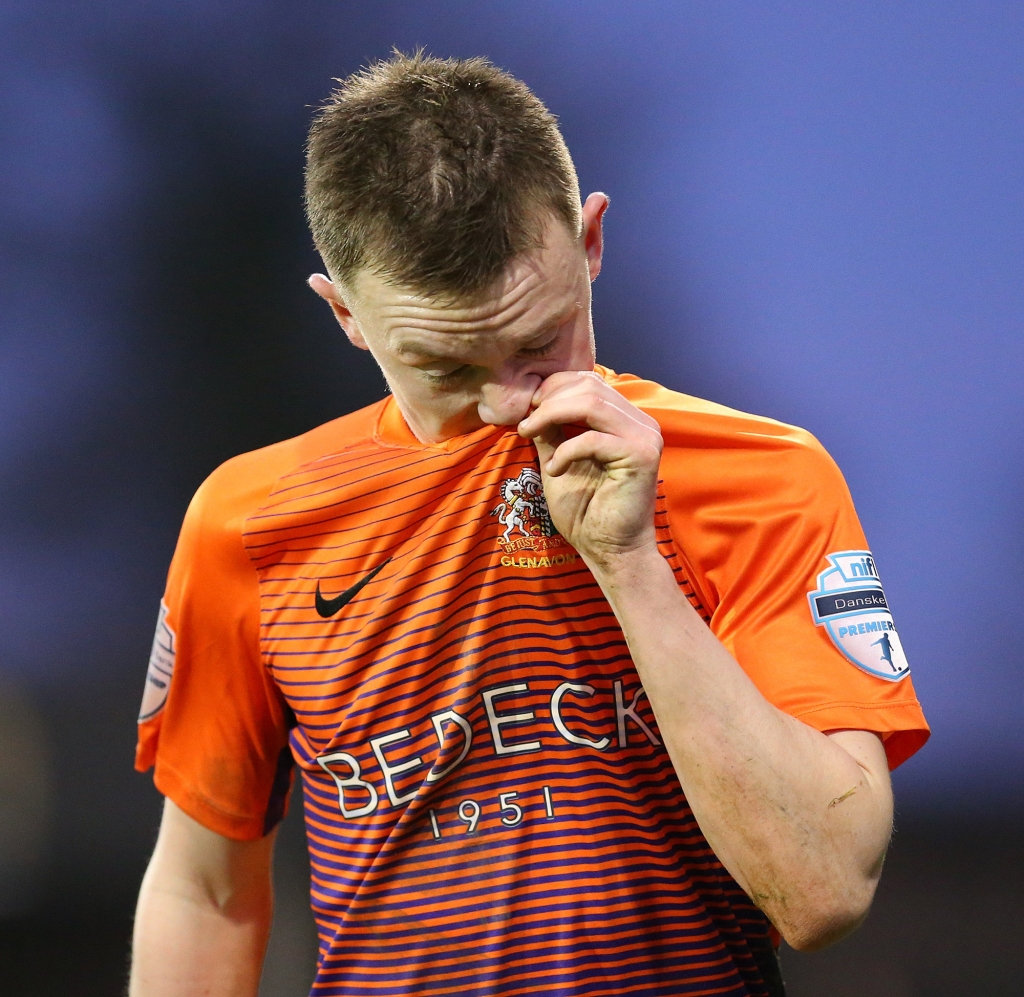 James Singleton was sent off for picking up two yellow cards.

Singleton picked up his second booking on 62 minutes for a foul on substitute Cormac Burke, but any fears that the sending off might swing the game in Dungannon’s favour were dispelled by Clingan ten minutes later.

Chris Hegarty probably should have been given a straight red card for the cynical foul on Sykes which resulted in the free-kick that Clingan so expertly dispatched to make it 3 – 0 to the visitors. It was a strike of real quality – up and over the wall, then dipping and curling away from the dive of Addis and into the bottom corner.

Lafferty and Mayse both squandered opportunities as the hosts battled in vain to get back into the game; the former heading a tame effort straight at Tuffey and the latter finding the side-netting with a shot that should have hit the target.

Five minutes from time Jordan Jenkins had an opportunity to grab a fourth goal for Glenavon when he was played in by fellow substitute Andy McGrory, but Addis was out quickly to deny him.

The young striker did find the net in injury time, but his effort was ruled out for offside, and the game finished 3 – 0 to Glenavon.

It’s back to Mourneview Park for the Lurgan Blues on Boxing Day as they play host to 10th-placed Warrenpoint Town.