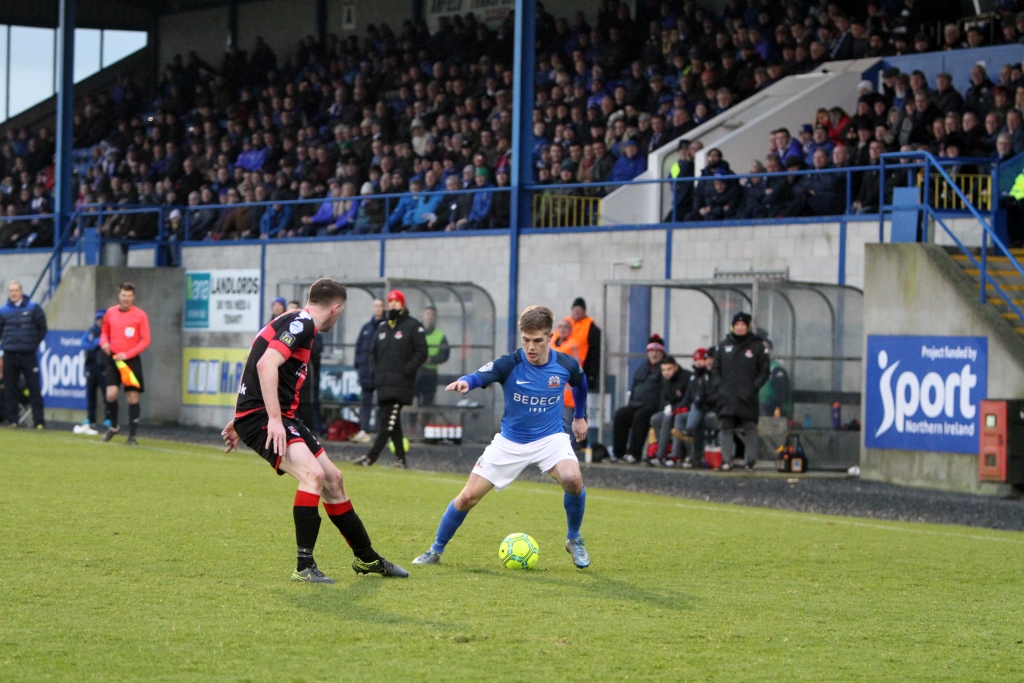 Josh Daniels in action in front of a packed Geddis Stand.

Glenavon came out on the wrong end of a seven-goal thriller on Saturday as Crusaders defeated them 4 – 3 in a pulsating match at Mourneview Park.

Sammy Clingan responded with a penalty for Glenavon early in the second half, but Paul Heatley added a fourth goal for the Crues ten minutes from time.

James Singleton grabbed Glenavon’s third on 89 minutes to give the Lurgan Blues hope of rescuing a point, but it wasn’t to be, as the Crues held on for the victory.

It was clear from the start that both teams were intent on getting on the front foot and attacking each other, and it was Glenavon who landed the first telling blow when Griffin opened the scoring on five minutes.

Josh Daniels headed Singleton’s throw-in inside to Andrew Mitchell and he teed up strike partner Griffin, who slammed his low shot past Sean O’Neill at the near post.

Glenavon weren’t to be in front for long, however, as the Crues hit back in the 12th minute through Snoddy. Howard Beverland’s clearance was nodded down by Jamie Glackin for Sean Ward, who played an excellent pass with the outside of his left foot out to Heatley on the left. The winger held it up before slipping it inside to Snoddy just outside the penalty area. He took one touch to set himself, then struck a low shot which beat Jonathan Tuffey at his right-hand post.

Crusaders really should have taken the lead two minutes later when Glackin found himself in on goal after Heatley had played him through following a flicked header from Jordan Owens. The midfielder dragged his left-foot shot wide of the far post.

The visitors didn’t have to wait long before going ahead, though. The ball was slipped into the penalty area by Whyte for Burns to run onto and the right-back drove a shot past Tuffey from a tight angle to make it 2 – 1.

Eight minutes later Crusaders added their third. From a free-kick 25 yards out, Heatley slipped the ball inside to Whyte. The NIFWA’s November Player of the Month hit a low shot with his right foot which evaded Tuffey’s dive down to his right. 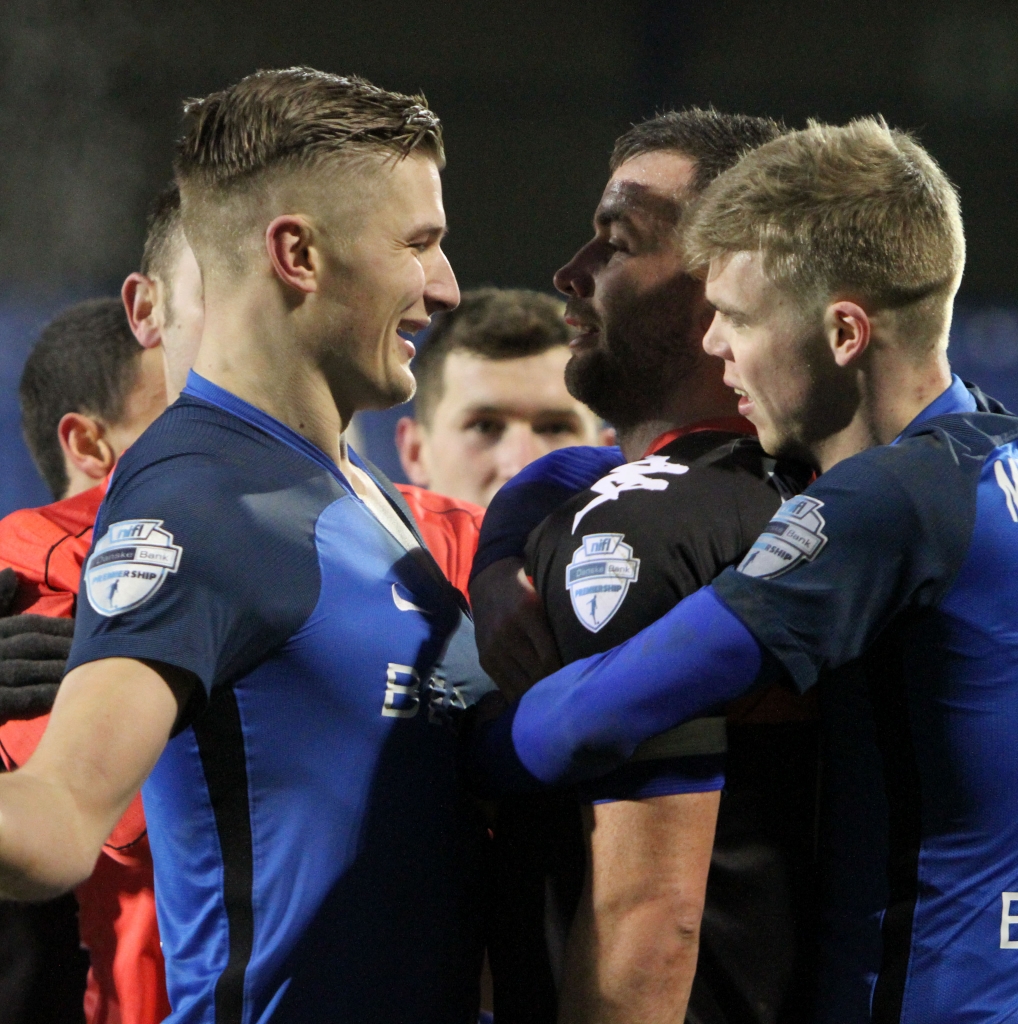 Andrew Mitchell and Colin Coates, probably not discussing each other’s plans for Christmas!

Glenavon were unfortunate not to get a second goal just before half-time. Substitute Andy McGrory played the ball down the line for Mitchell on the right. The striker did well to evade the challenge of Crues captain Colin Coates before sending in a low cross which found the feet of Griffin. He played it out to Daniels, and the young winger was denied not once but twice by Crusaders goalkeeper O’Neill to ensure that the visitors maintained their two-goal advantage heading into the break.

Glenavon started the second half well and they were duly rewarded when a penalty was given by referee Evan Boyce for a clumsy tackle by Coates on Bobby Burns. Clingan preserved his perfect record from the spot this season as he placed the ball low inside O’Neill’s right-hand post to make it 3 – 2. 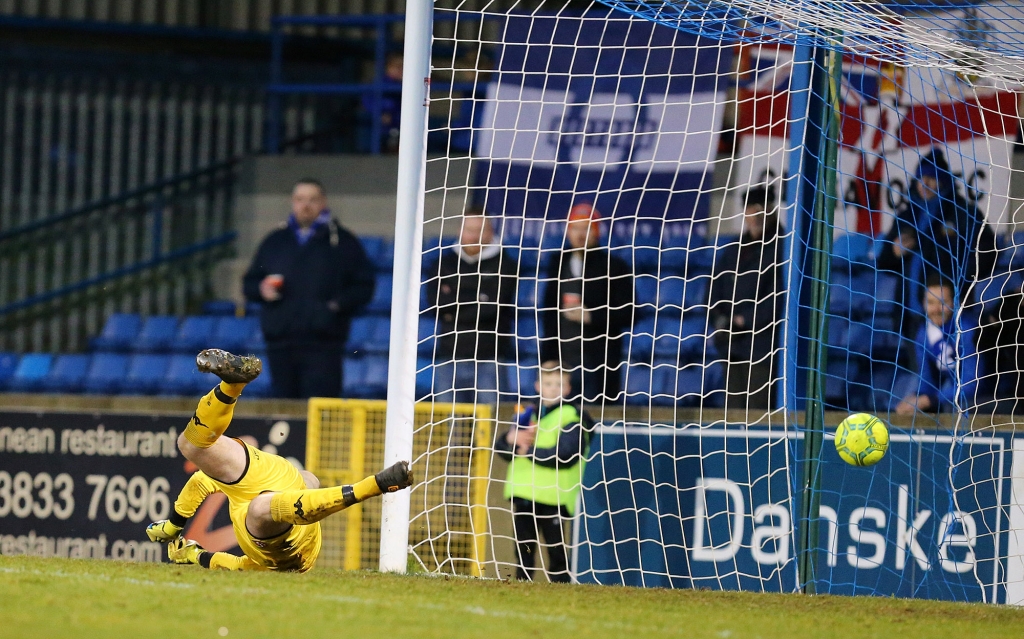 Glenavon were well on top by this stage, putting the visitors under pressure and pushing for the equalising goal, but the game was effectively settled by two incidents which occurred in the space of three minutes. Singleton must still be wondering how his effort on 78 minutes stayed out. He crashed a wicked shot off the underside of the bar which came down onto the goal line and bounced out. Mitchell latched onto the rebound, but O’Neill was equal to his effort, pushing it behind for a corner.

Having somehow withstood the Glenavon pressure, Crusaders got their fourth goal against the run of play in the 82nd minute through Heatley. Substitute David Cushley nutmegged Singleton before backheeling the ball to Burns. The full-back’s cross came out to Snoddy on the edge of the area. His left-footed effort struck the post and fell for Heatley. Tuffey made an outstanding save to keep out the winger’s initial effort, but there was nothing he could do to prevent the rebound from finding the net as Heatley struck what proved to be the winner.

Owens should have made the victory absolutely certain four minutes later when Whyte pulled the ball back for him inside the penalty area, but he could only blaze the ball over the bar.

The big striker also played a part in Glenavon’s third goal. He failed to clear a Burns corner and the ball fell for Singleton, whose right-foot shot found the net via a deflection off Crues left-back Mark McChrystal and set up a tense finish.

However, Crusaders held on to secure the three points, and they remain in second place in the Danske Bank Premiership table, six points behind pacesetters Coleraine. Defeat for Glenavon saw them slip to fourth place in the standings, as Cliftonville’s victory over Glentoran meant they leapfrogged Glenavon into third place.

Next up for the Lurgan Blues is a trip to Stangmore Park to take on eighth-placed Dungannon Swifts on Saturday (December 23rd).