Gary Hamilton marks six years in charge of Glenavon this weekend with a mammoth game against Crusaders.
The Crues were the opponents for Gary’s first home game in charge back in 2011 – a game the Lurgan Blues won 3-2 thanks to a Kyle Neill brace and a Diarmuid O’Carroll header.
Back then the three points were essential to keep Glenavon in the division. Now it’s a big game for all of the right reasons as both games push at the top of the table.
Hamilton, who is now the club’s third longest serving manager behind Jimmy McAlinden and Terry Nicholson, is relishing the big games that Glenavon are currently enjoying and Saturday’s game is no exception.
“It’s a big game – they’re all big games – and it’s important we keep winning them,” he told the club’s website.
“It will be a difficult game and it won’t be easy as Crusaders are a top side.
“However, we will take confidence from our previous game against the Crues when we beat them 3-2 at Seaview.
“If we show the same effort and committment then we can get a result. They are in good form and winning games of football, but so are we.” 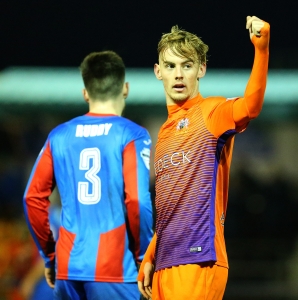 Glenavon will be without the suspended duo of Andy Doyle and Mark Sykes, but they have been given a boost by Andy Hall’s fitness.
“Andy got through training last night which has pleased us, so we have to decide whether or not he should feature.
“It’s something that we will consider on the morning of the match. He’s only had one training session so it might be better to rest him on this occasion.”