Glenavon picked up their first win of the season on Saturday as they thrashed Warrenpoint Town 6-1 at Milltown.

It was the hosts who went ahead on 11 minutes when captain Fra McCaffrey took advantage of defensive errors from Glenavon goalkeeper Declan Brown and skipper James Singleton to open the scoring, but the visitors hit back just a minute later as Peter Campbell drilled a low shot in off the post to equalise.

From then on it was one-way traffic, with Matthew Fitzpatrick grabbing a quick-fire brace with goals scored on 20 and 24 minutes before Andy Waterworth scored his first Glenavon goal in the 42nd minute to leave the half-time score 4-1.

Waterworth notched his second and Glenavon’s fifth on 59 minutes, and substitute Daniel Purkis completed the scoring on 87 minutes to round off a dominant display by the Lurgan Blues.

After a quiet opening 10 minutes the game suddenly burst into life on 11 minutes when McCaffrey opened the scoring for the home side. Glenavon keeper Brown sent a poor kick straight to Kealan Dillon and he fed the ball out to Steven Ball, who in turn sent a long kick towards the right channel. Singleton was there to cut out the danger, but when he tried to head the ball back to Brown he didn’t get enough on it and McCaffrey took full advantage by driving a low shot under the Glenavon goalkeeper and into the net.

The Lurgan Blues weren’t to be behind for long, however. Just a minute later Matthew Snoddy slid a cute pass into the box to find Campbell and the winger took one touch before drilling a low shot in off the far post with his left foot to equalise.

Nine minutes after that Glenavon got their noses in front. Sean Ward’s long throw from the right was flicked on by the head of Mark Haughey and Fitzpatrick pounced at the back post to turn the ball into the net.

Fitzpatrick got his second and Glenavon’s third in the 24th minute. Michael O’Connor’s deflected pass out to the right fell perfectly for Andy Hall and he squared the ball along the six-yard box for Fitzpatrick to tap in.

O’Connor had a pop at goal from distance with a free-kick on 29 minutes, but Warrenpoint goalkeeper Conor Mitchell dived to his right to make a comfortable save.

Glenavon scored their fourth goal three minutes before the break. Campbell sent a deep cross over from the left which found Hall at the back post. It looked like Hall’s header was going in anyway, but the predatory Waterworth made sure by diving to head the ball over the line and notch his first competitive goal for Glenavon.

There was very little threat from Warrenpoint in the second half, although Dillon did force Brown into making a save on 55 minutes when he shot from distance with his right foot.

Glenavon’s fifth arrived on 59 minutes. Singleton picked Waterworth out with a superb ball over the top and the striker brought the ball under control with a sublime first touch before slotting past Mitchell to score his second of the match.

With the result well and truly wrapped up by this stage Glenavon manager Gary Hamilton was able to use all five permitted substitutions as the game entered the closing stages. One of those subs, Josh Doyle, was unfortunate not to score not once but twice, as Mitchell denied him with two smart saves.

First, in the 72nd minute, Hall sent over a brilliant volleyed cross from the right to pick out Doyle and his header looked destined for the net until Mitchell dived to keep it out with a super stop.

Ten minutes later Doyle was put through by fellow substitute Jack O’Mahony, but Mitchell came out on top in the one-on-one to deny the young striker again.

Namesake Andrew Doyle was also introduced from the bench, and he went close to scoring a spectacular goal on 83 minutes. The defender set off on a mazy run deep inside his own half and carried the ball all the way to the edge of the Warrenpoint penalty area before letting fly with a wicked shot that went narrowly over the bar.

In the end, it was to be a substitute who scored Glenavon’s sixth goal. Ward found Josh Doyle with a long ball over the top of the Point backline and he unselfishly squared for Purkis to leave his fellow striker with the simple task of rolling the ball into the far corner to round off the scoring.

Glenavon will be hoping to build on this impressive victory next Saturday (11th September) when they welcome Carrick Rangers to Mourneview Park (kick-off 3pm). 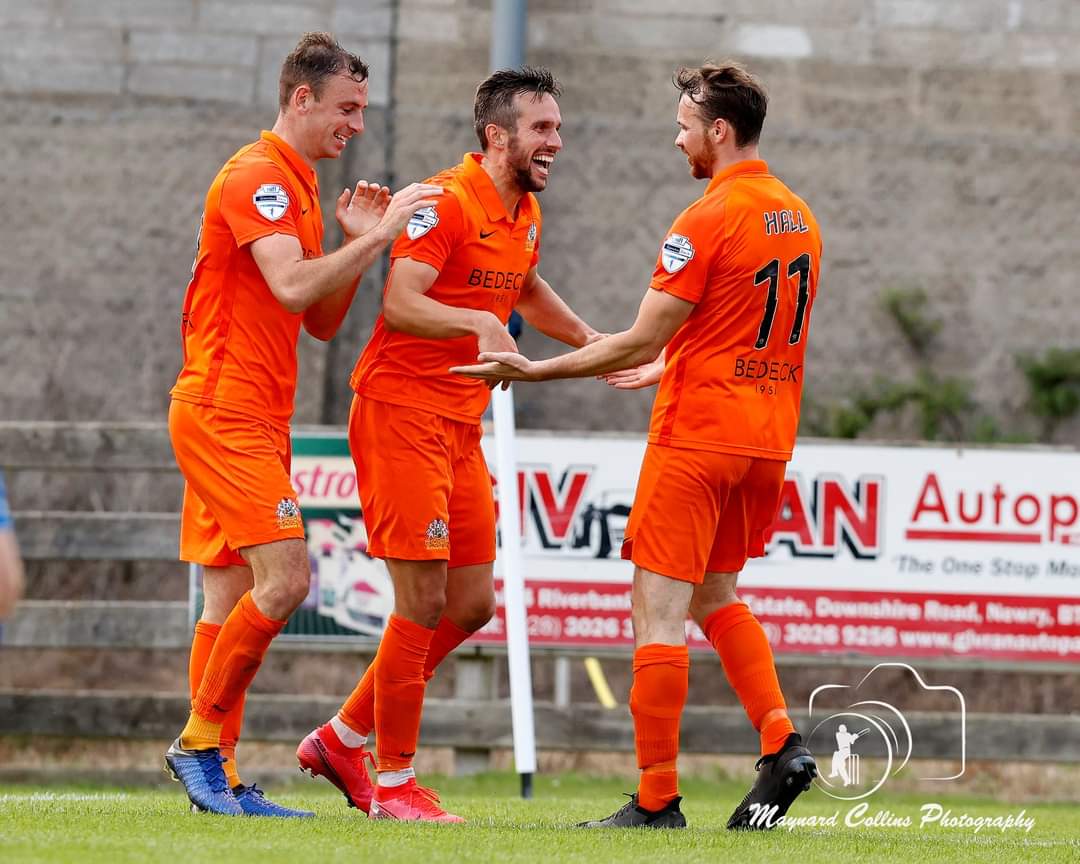 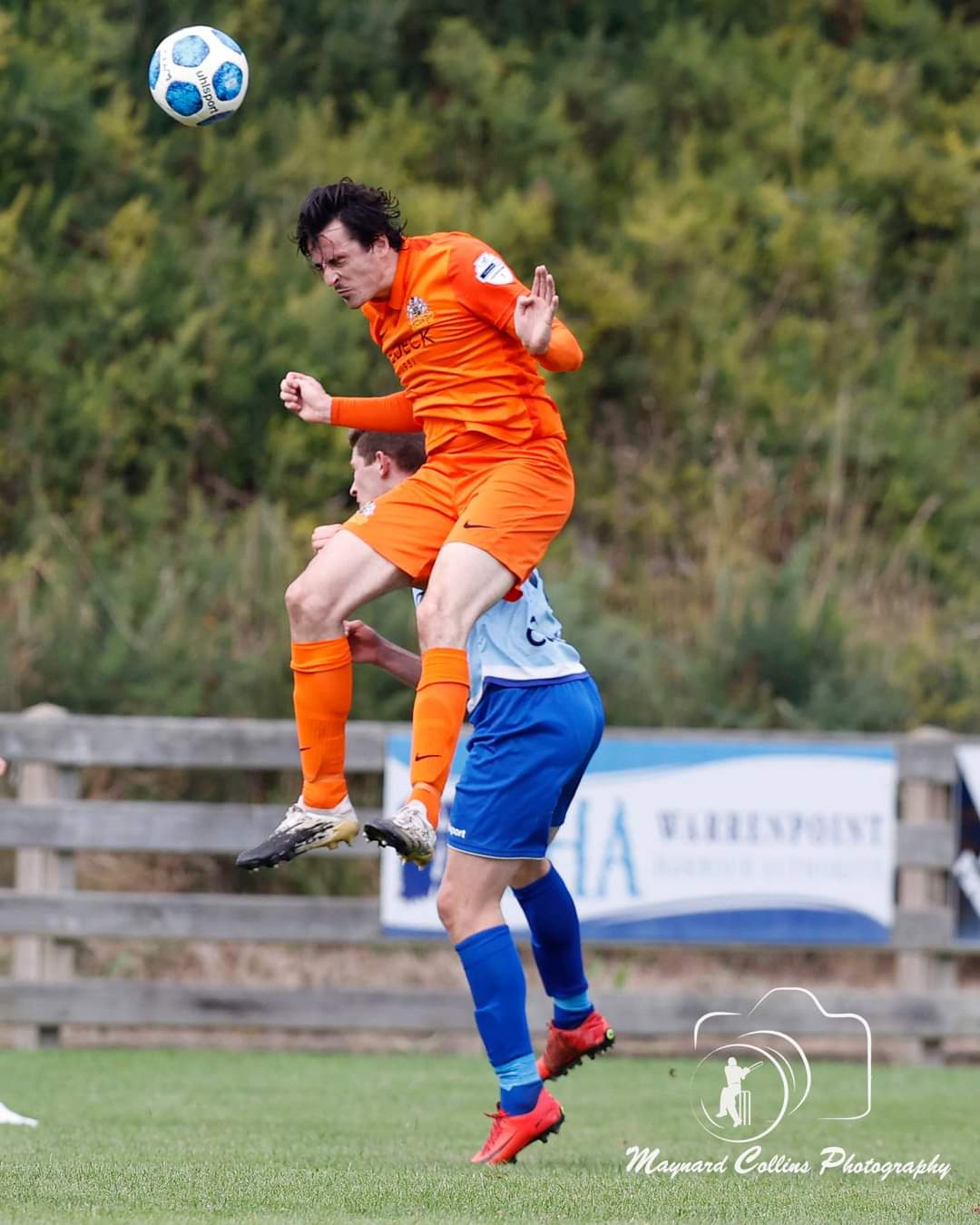 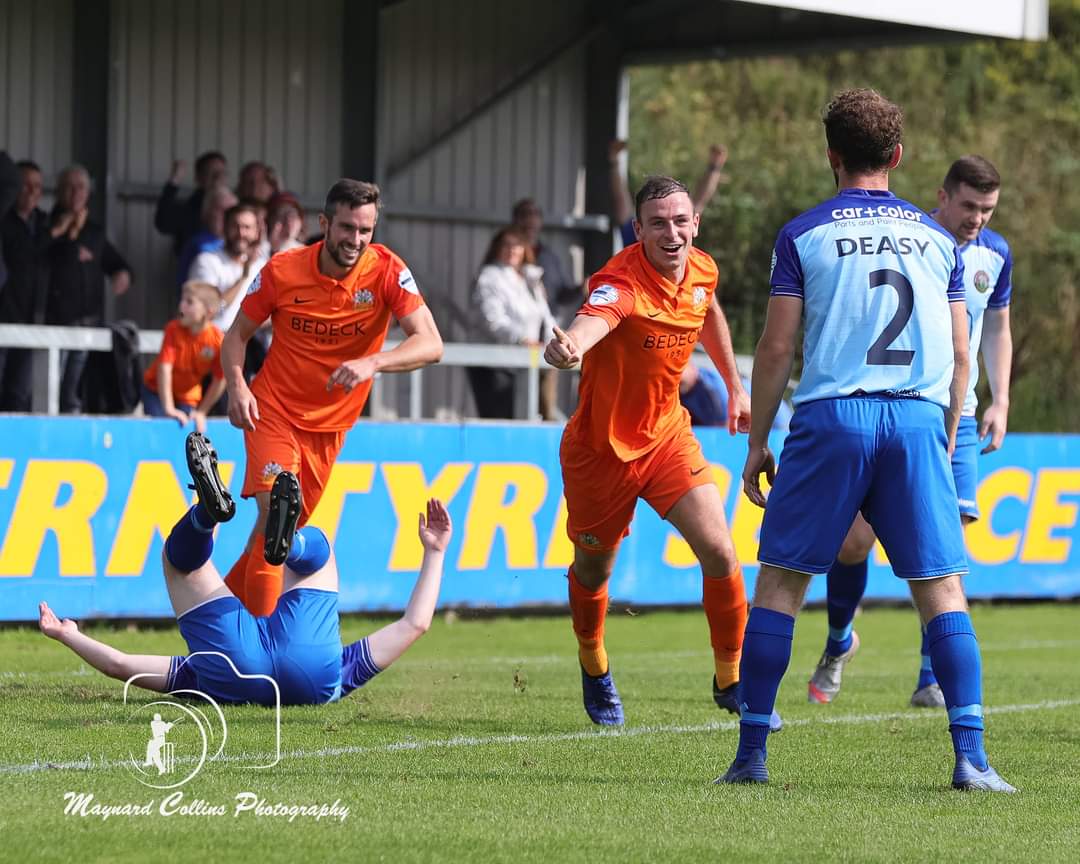 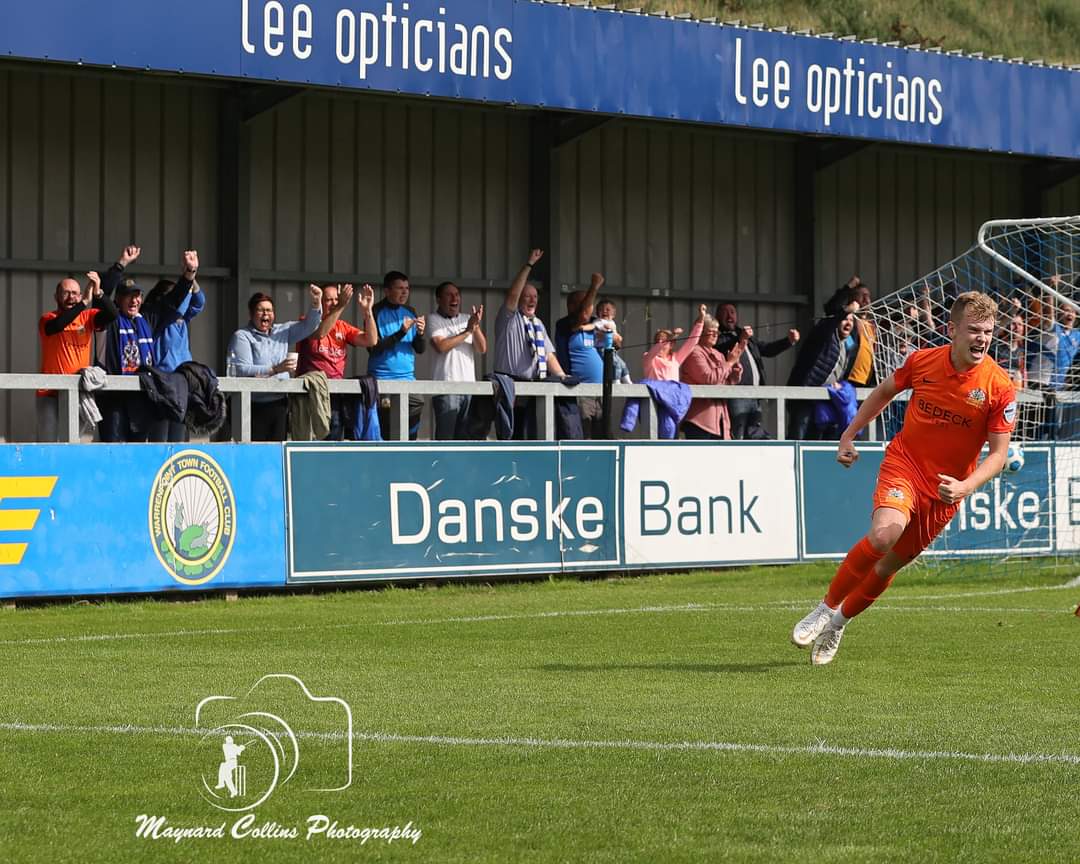 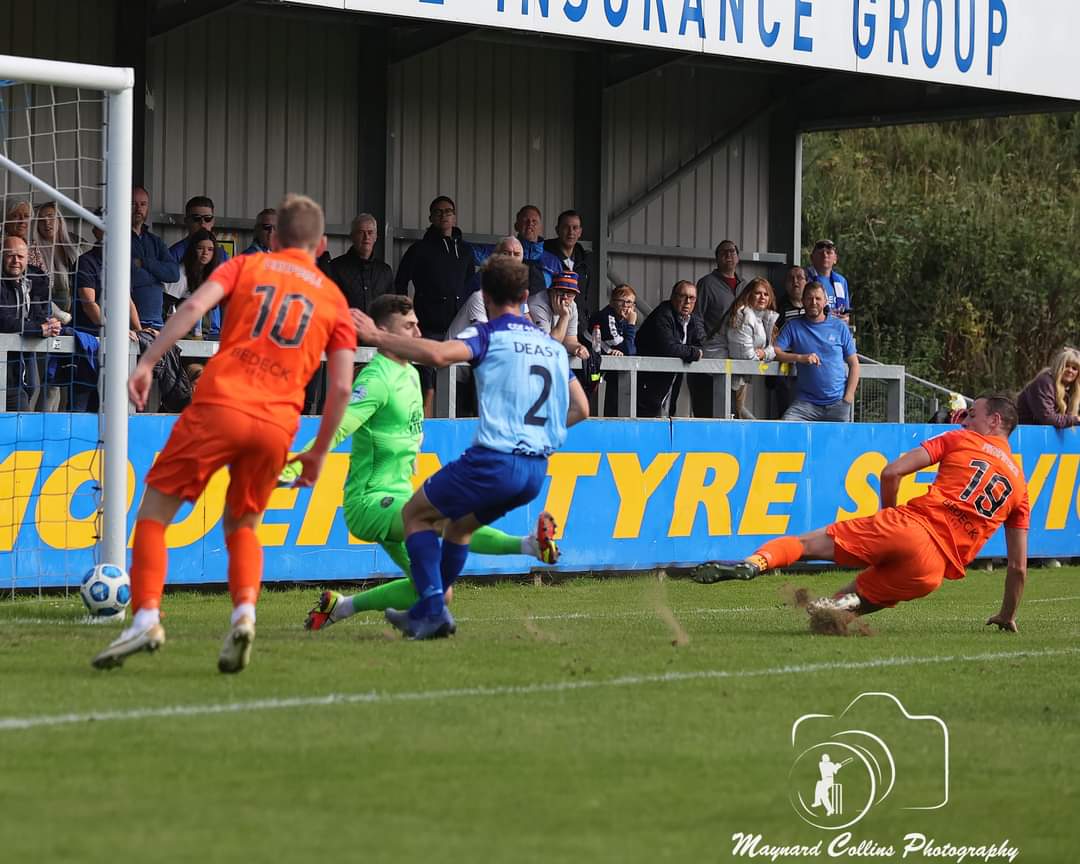 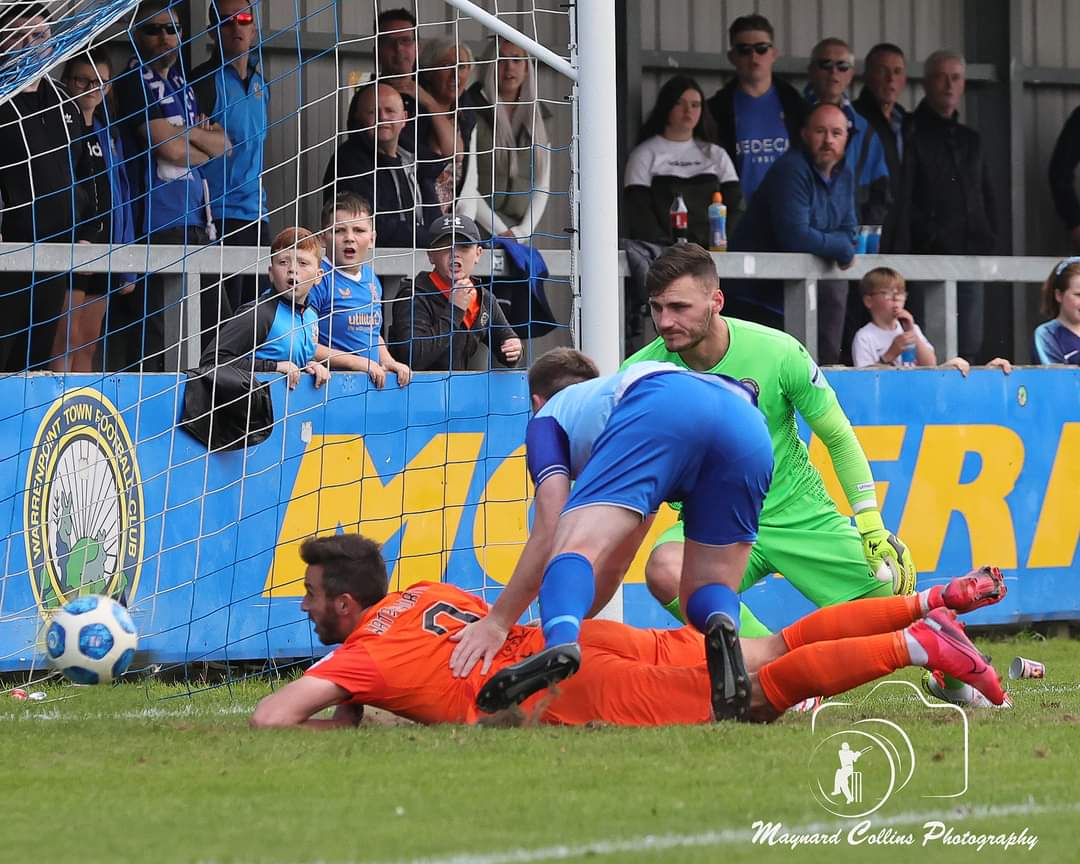