Skip to content
Previous Next
MATCH REPORT: Glenavon get back on track with win over Sky Blues

Glenavon got back to winning ways with a well-deserved 2-1 victory over Ballymena United at Mourneview Park on Saturday afternoon.

Conor McCloskey gave the Lurgan Blues the lead when he struck against his former employers on 18 minutes, while Michael O’Connor doubled the lead from the penalty spot 10 minutes before half-time, after Ballymena full-back Ross Redman had been penalised for handball.

Glenavon comfortably held on to their two-goal advantage for the majority of a second half which was less entertaining than the first, but the Sky Blues did pull a goal back in the second minute of injury time to give the Mourneview men a late scare when Joshua Kelly converted from substitute Andy McGrory’s corner.

However, Gary Hamilton’s men held on to secure their first win of 2021.

Ballymena were the first side to threaten when Seamus McCartan cut in from the left and fired a low shot in on three minutes, but the ball rolled harmlessly wide of Craig Hyland’s right-hand post.

McCloskey then fired over the bar with a left-footed shot from distance at the other end seven minutes later.

Ballymena broke with real pace following a Glenavon corner on 17 minutes, but Paul McElroy got his cross all wrong when well positioned on the left and the ball drifted behind for a Glenavon goal-kick.

The home side broke the deadlock a minute later through former Ballymena man McCloskey. The excellent Matthew Fitzpatrick held the ball up brilliantly before releasing Peter Campbell on the left flank. The winger’s cross found McCloskey at the back post, only for him to initially be denied by a smart save from Ballymena goalkeeper Jordan Williamson. McCloskey made no mistake at the second time of asking, however, smashing the ball home to open the scoring.

The Glenavon winger came close to adding a spectacular second on the half-hour mark when he struck a wicked volley on target from 20 yards, but Williamson was equal to the effort and managed to tip the ball over his crossbar.

McCloskey was at the heart of the action again in the 34th minute when his cross from the right was adjudged to have been handled by Ballymena left-back Redman and referee Andrew Davey pointed to the spot. O’Connor stepped up and stroked the ball into the bottom left corner to score from the penalty spot for the second successive game and double the Lurgan Blues’ lead.

Glenavon striker Danny Purkis found the target with a header from a Campbell corner seven minutes into the second half, forcing Williamson into another save.

Ballymena substitute Ryan Waide came agonisingly close to pulling a goal back for the Braidmen four minutes later, but his header dropped inches wide of the far post following a right-wing cross from Trai Hume.

There was much less action of note in the second period, although Ballymena’s McCartan did hit the target with a sweetly struck free-kick on 80 minutes. The shot was straight at Hyland, however, and the Glenavon keeper comfortably gathered.

Inside the final 10 minutes, Glenavon went in search of the third goal that would have put the result beyond doubt. Campbell twice shot from just outside the box with his left foot, but his first effort on 82 minutes was straight at the goalkeeper, while he dragged his second wide of the post a minute later.

Fitzpatrick probably had the best opportunity to add a third in the 84th minute when he found himself in shooting space on the right side of the penalty area, but he couldn’t find the far corner with his low right-footed strike.

Ballymena rarely threatened, and it looked like Glenavon were going to see out the game comfortably as it entered the final minutes, but David Jeffrey’s side did manage to pull a goal back in injury time and set up a nervy finish for the home team. Former Glenavon winger McGrory took a corner from the left and Kelly’s low shot squirmed past Hyland.

It proved to be too little too late for Ballymena, though, and the Lurgan Blues held on for a deserved victory which sees them leapfrog Warrenpoint Town to move into eighth position in the Premiership table.

Gary Hamilton’s men face a tough test on Tuesday night (9th February) when they welcome in-form Coleraine to Mourneview Park. Oran Kearney’s side currently occupy fourth place in the league standings and are unbeaten in their last eight league games. Kick-off is at 7.45pm. 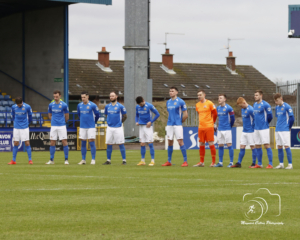 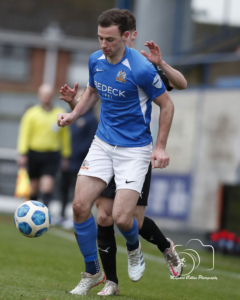 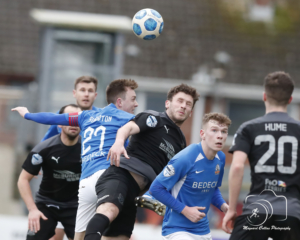 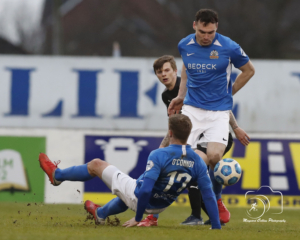 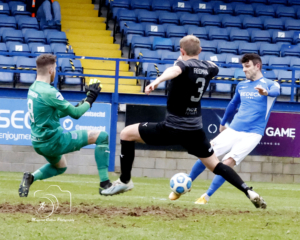