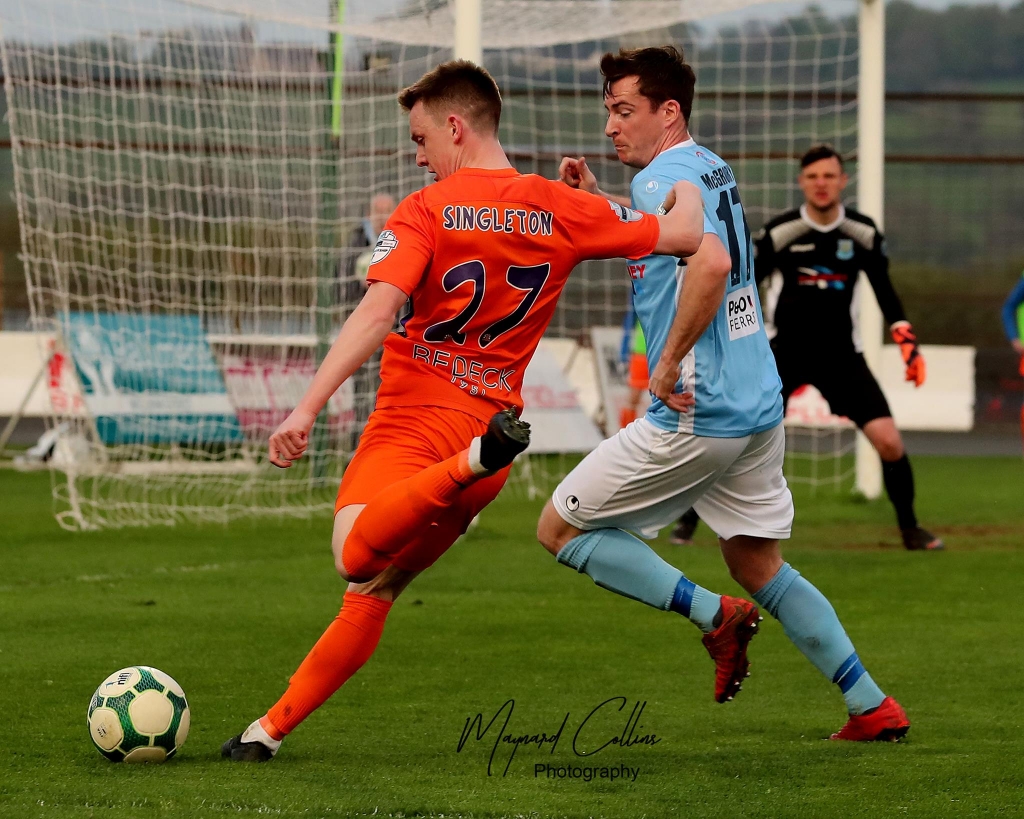 Glenavon finished on the wrong end of a seven-goal thriller at the Ballymena Showgrounds on Tuesday night as David Jeffrey’s side won 4-3 and secured second place in the Danske Bank Premiership in the process.

Jonathan McMurray took advantage of a poor back-pass from Caolan Marron to tee up Andy McGrory for a tap-in to open the scoring for Ballymena in the 9th minute, but Glenavon hit back 10 minutes later when Seamus Sharkey powered in a header from a Conor McCloskey corner.

McMurray put the home side back in front when he pounced on a loose ball in the box to slam a half-volley into the top corner, while his strike partner Adam Lecky doubled the Braidmen’s advantage 11 minutes into the second half when he finished off a neat move that also involved McGrory and McMurray.

When Andrew Mitchell scored an equaliser in the 86th minute it looked like the game was set up for a grandstand finish, but the Sky Blues went straight up the other end and scored the winner through substitute Shane McGinty, who made sure that his side secured a second-placed finish for the first time in almost 40 years and automatic passage to next season’s Europa League qualifiers along with it.

Both sides struggled to really exert themselves over one another in the opening minutes of the game, so perhaps it was no surprise that the first goal arrived as the result of a defensive error. Marron’s back-pass towards goalkeeper Jonathan Tuffey was much too weak and allowed McMurray to gather the ball and square it across the six-yard box for former Glenavon man McGrory to open the scoring with a simple tap-in. 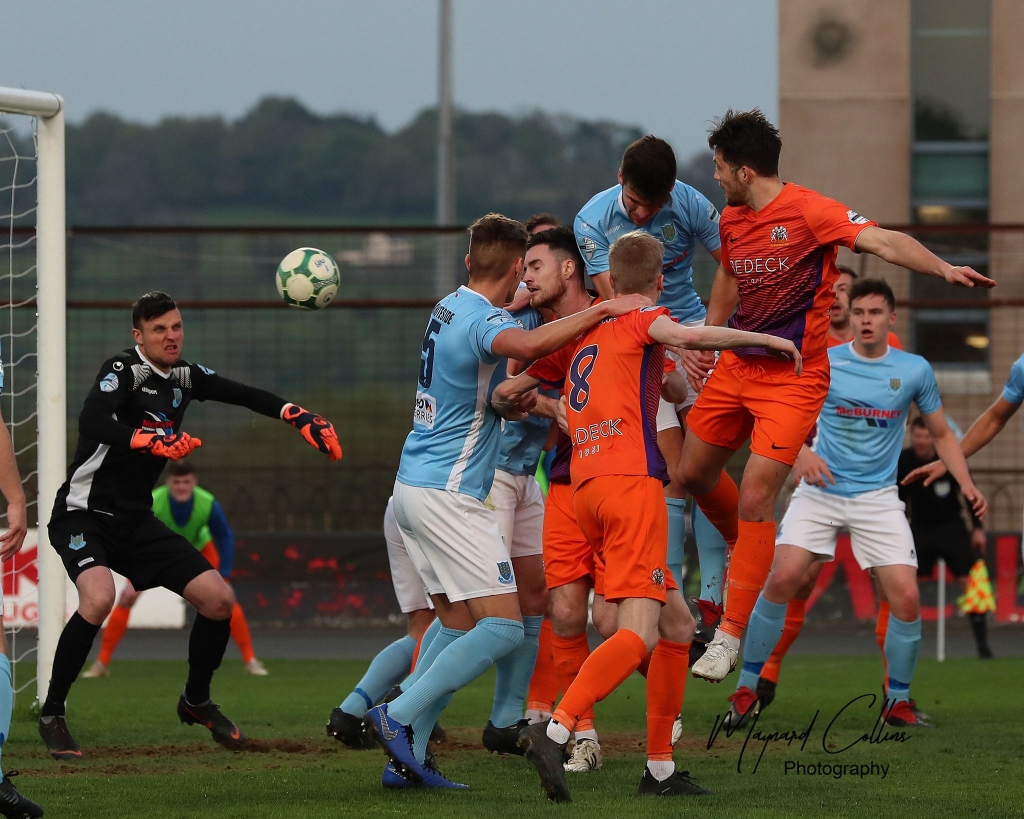 The visitors were behind for just 10 minutes, however. A good spell of pressure resulted in them winning three corners in quick succession, and when McCloskey sent over the third of these set-pieces Sharkey rose to meet the ball with his head and nodded it down and past Ross Glendinning to make it 1 – 1.

The home side restored their advantage less than five minutes later. Glendinning’s long free-kick was flicked on by captain Jim Ervin and McGrory attempted to lob the ball over Tuffey as the keeper rushed off his line. Tuffey made a good save to deny McGrory, but the ball fell kindly for McMurray, who sent a half-volley into the far top corner with his right foot to grab Ballymena’s second of the evening.

The Braidmen added a third goal in the 56th minute when Lecky finished off a slick attacking move. The big striker fed the ball to McGrory before continuing his run towards the Glenavon penalty area. Two back-heels in a row from McGrory and McMurray released Lecky into the box and he slotted a low finish inside the left-hand post to make it 3 – 1.

The Lurgan Blues halved their deficit just two minutes later. McCloskey sent over a corner-kick from the left and when Ballymena failed to clear the ball Singleton was first to react, hooking a half-volley into the net. The goal was allowed to stand despite the home side’s claims that goalkeeper Glendinning had been fouled by Mitchell.

Singleton thought he had scored again on 67 minutes when he sent a brilliant header past Glendinning and into the far corner following a McCloskey free-kick from the right, but this time his effort was ruled out by the linesman’s flag.

At the other end Tuffey made a smart save to tip McMurray’s shot on to the crossbar just a minute later, while Glenavon substitute Jordan Jenkins saw a half-volley blocked by Ervin moments after that. The young striker then fired straight at Glendinning in the 71st minute.

The Glenavon equaliser arrived on 86 minutes. Singleton’s long ball forward was flicked on by the head of substitute Gary Hamilton and into the path of Mitchell. The striker met the ball just inside the penalty area and lashed his left-footed shot into the net to make it 3 – 3. 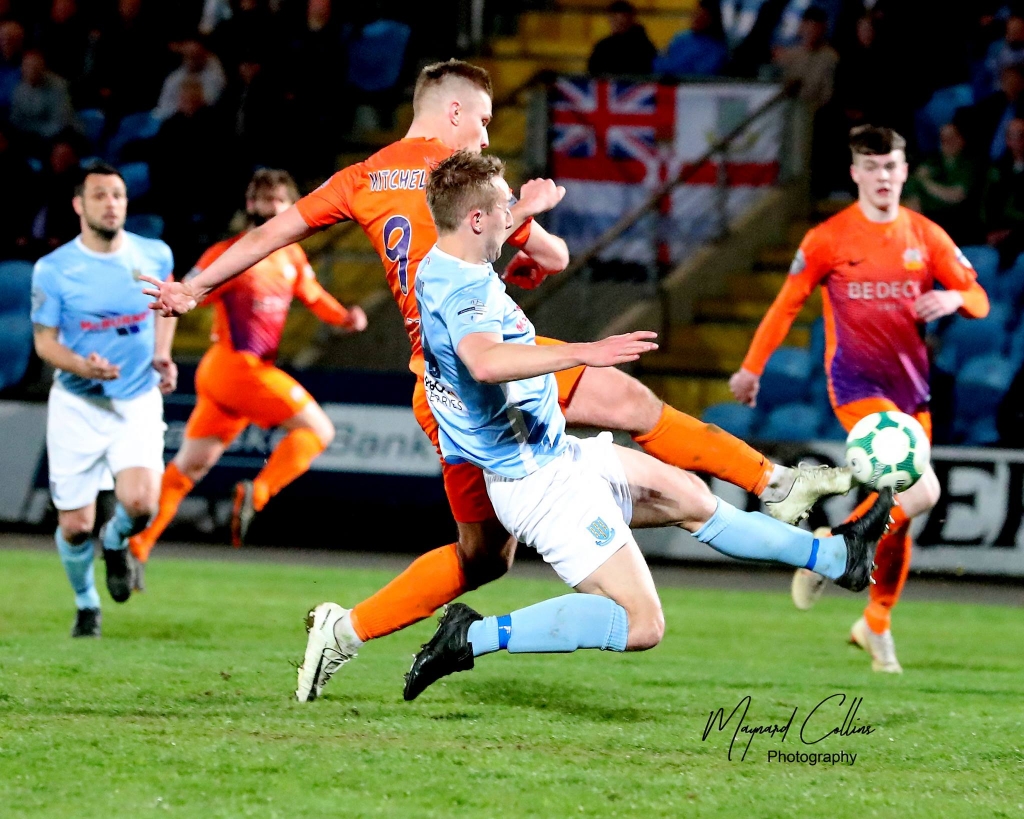 Glenavon’s travelling supporters were preparing themselves for one final push to try and find a winner that would keep alive their side’s hopes of a second-placed finish, but these hopes vanished when Ballymena hit back straight away to win the game. McGrory’s deep corner was kept alive by Albert Watson and when the ball fell to McGinty he took one touch with his right foot before thumping the ball into the top corner with his left.

Eoin Wearen very nearly scored a spectacular equaliser in time added on, but his stunning left-footed strike from distance came back off the crossbar and the game finished 4 – 3 to Ballymena.

In the final league match on Saturday (27th April) Glenavon host Cliftonville at Mourneview Park (kick-off 3pm) knowing that a point will almost certainly guarantee them third spot in the table given their two-point advantage and superior goal difference over fourth-placed Crusaders.