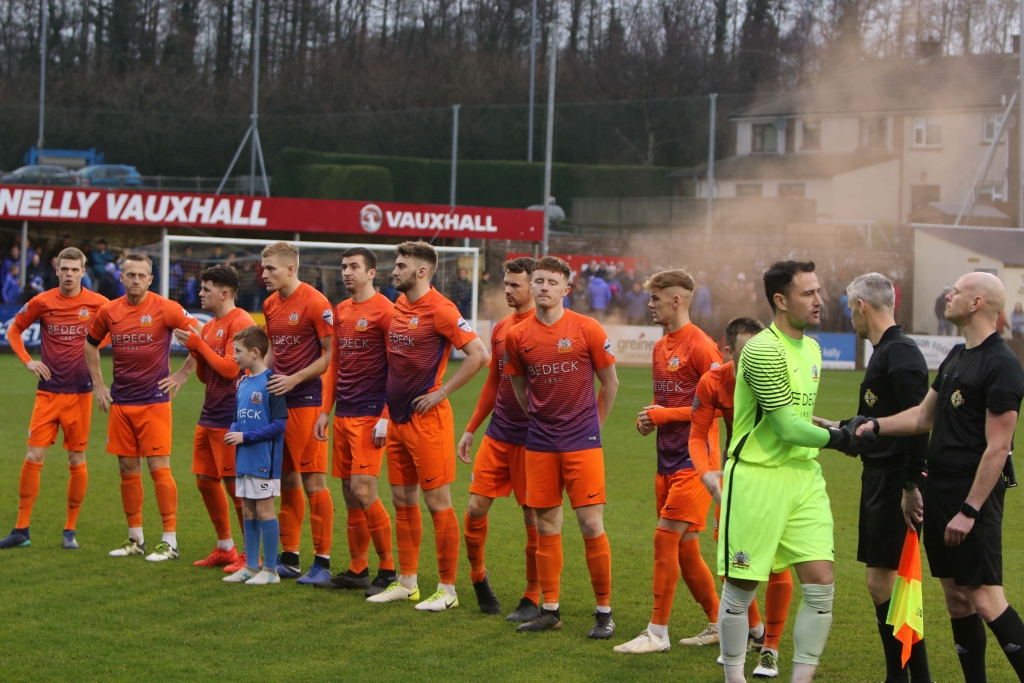 Substitute Stephen Donnelly scored in injury time to rescue a point for Glenavon in yesterday’s 1 – 1 draw with Dungannon Swifts at Stangmore Park.

Despite having Seanan Clucas sent off five minutes before half-time, it was the Swifts who took the lead when Paul McElroy struck on 70 minutes.

The Lurgan Blues had wasted a host of great chances before this, but just when it looked like they would be heading back down the M1 empty-handed, up popped Donnelly in the third minute of time added on to salvage a point.

The first opportunity of the afternoon fell to Glenavon. Ben Doherty swung a free-kick over from the right flank in the sixth minute to find Dylan King at the far post, but the centre-half couldn’t direct his header on target. 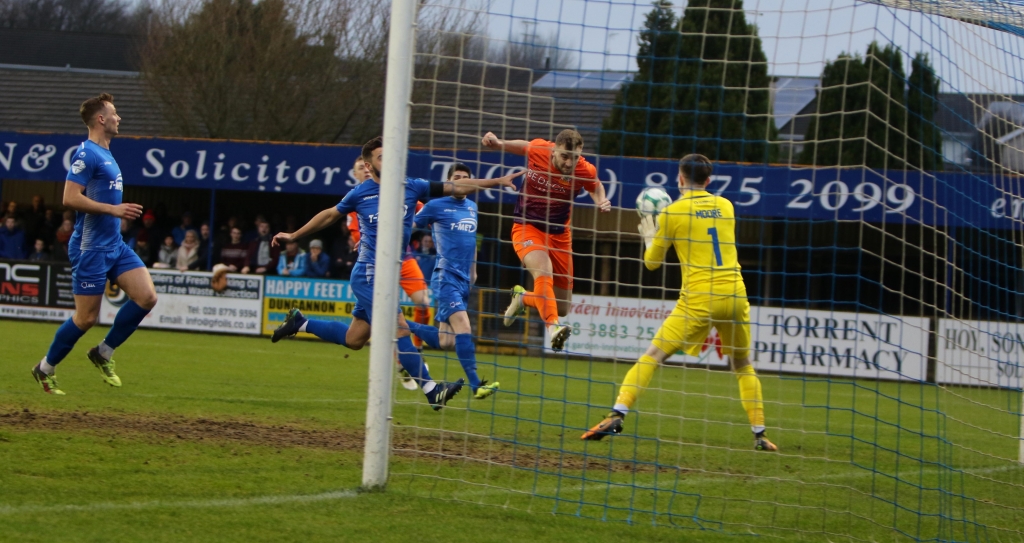 A neat Glenavon move involving Caolan Marron, Doherty and Andrew Mitchell led to a shooting opportunity for Stephen Murray. The striker turned Jake Dykes on the 18-yard line before firing in a low shot, but Swifts captain Chris Hegarty got a block in and deflected the ball behind.

In the 27th minute Andrew Hall had a pop at goal with a free-kick, but Swifts keeper Alex Moore made a comfortable save.

The home side saw Seanan Clucas sent off for a moment of madness in the 40th minute when he threw the ball into the face of Rhys Marshall right in front of the fourth official.

Given their numerical advantage, Glenavon unsurprisingly enjoyed a lengthy spell of pressure in the early stages of the second half. When Murray’s shot was saved by Moore in the 47th minute the ball rebounded to Hall and the winger fizzed in a low cross which Mitchell narrowly missed getting on the end of at the back post. 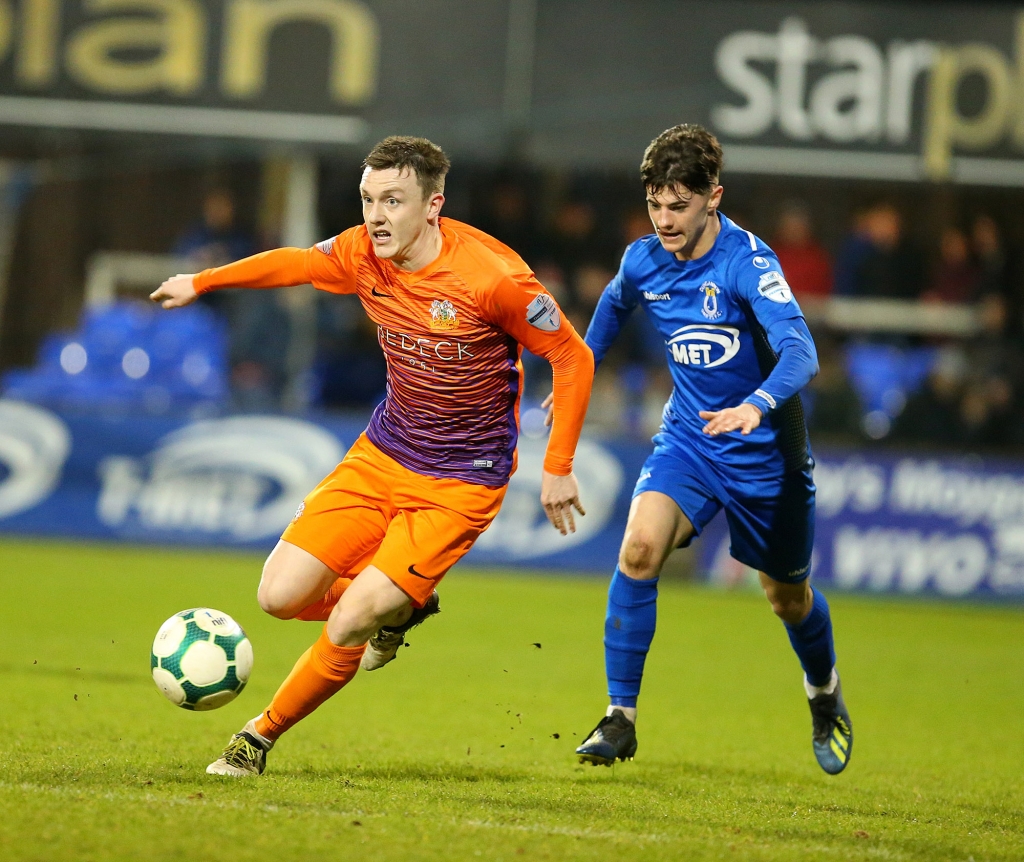 Hall sent over an almost identical cross on 59 minutes which Gary Muir got his boot to, but the substitute couldn’t get enough on the ball to divert it into the net.

Two minutes later Tuffey was called into action at the other end when McElroy struck a fierce shot from the left corner of the penalty area. The Glenavon stopper had to dive down to his right to make the save.

Mitchell missed a golden opportunity to open the scoring in the 64th minute. James Singleton got his head to a Hall free-kick, forcing Moore to make a good save to keep the ball out of the net. However, the Swifts keeper pushed the ball into the path of Mitchell just a couple of yards out. Somehow the former Dungannon striker failed to put the ball in the net, only tamely hitting it straight at Moore instead.

Glenavon paid the price for their profligacy when the Swifts took the lead against the run of play on 70 minutes. McElroy played a neat one-two with Grant Hutchinson just outside the box, collecting the return pass inside the area before dinking the ball over Tuffey and into the far corner to open the scoring.

The visitors immediately went in search of an equaliser, and Muir saw his shot deflected behind off Alan Teggart in the 75th minute.

Seven minutes later Mitchell was presented with another great opportunity to score when Marshall fired in a cross. It seemed to take the striker by surprise, however, and the ball struck him in the midriff before falling into the grateful arms of Moore. 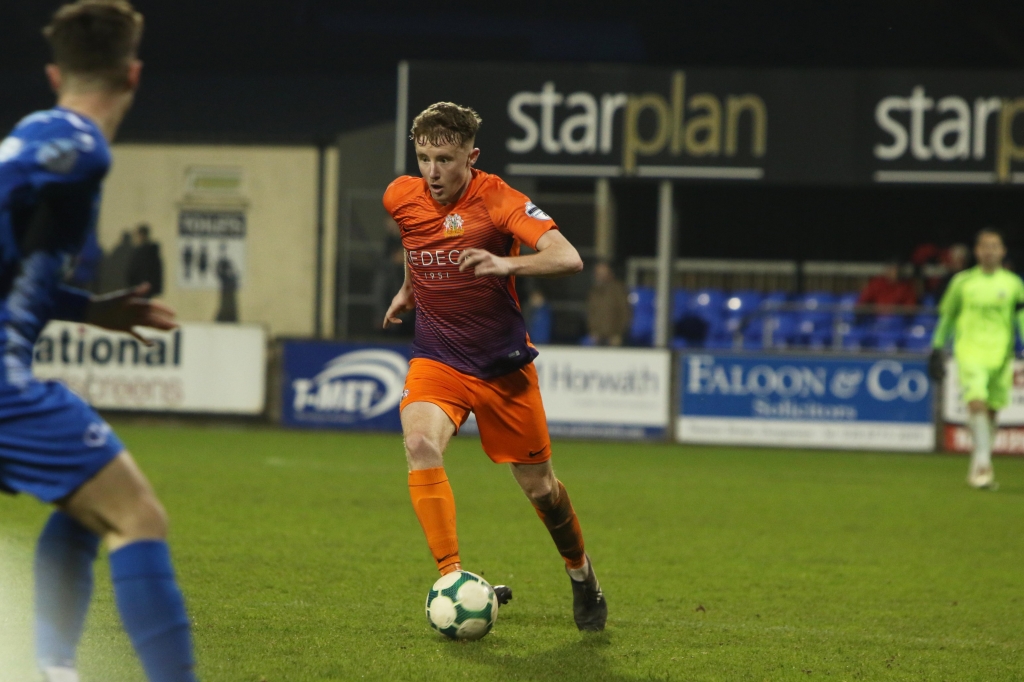 Mitchell was involved again when he teed up Sykes for a shot at goal in the 87th minute. The midfielder’s volley brushed the side-netting.

The hosts might have doubled their lead following an 89th-minute counter attack. McElroy squared the ball for Daniel Hughes, but the striker miskicked and the chance was gone.

When substitute Jordan Jenkins became the latest Glenavon player to miss a sitter in the first minute of injury time it looked certain that the Lurgan Blues were going to slump to a Boxing Day defeat. Donnelly had other ideas.

Hall whipped in a corner which was awarded after Mitchell’s shot had been blocked by the impressive Hegarty. Marshall rose and headed the ball down into the six-yard box where it fell to Donnelly, and the substitute converted from point blank range to rescue a point for Glenavon. 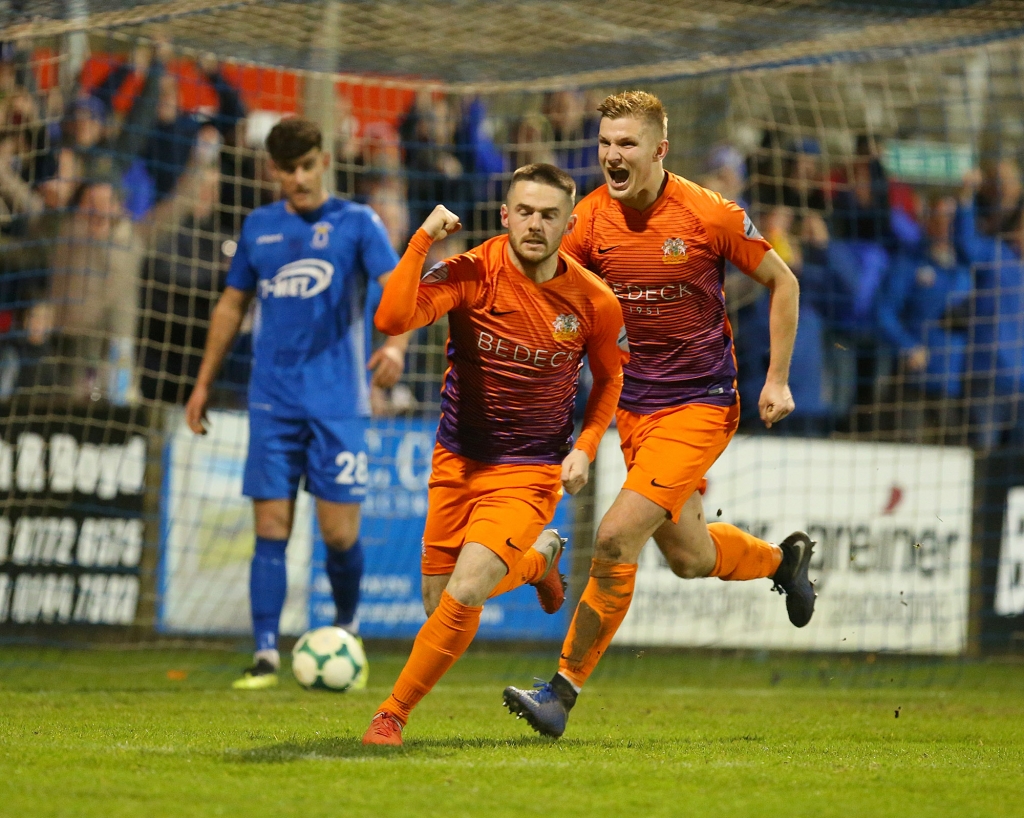 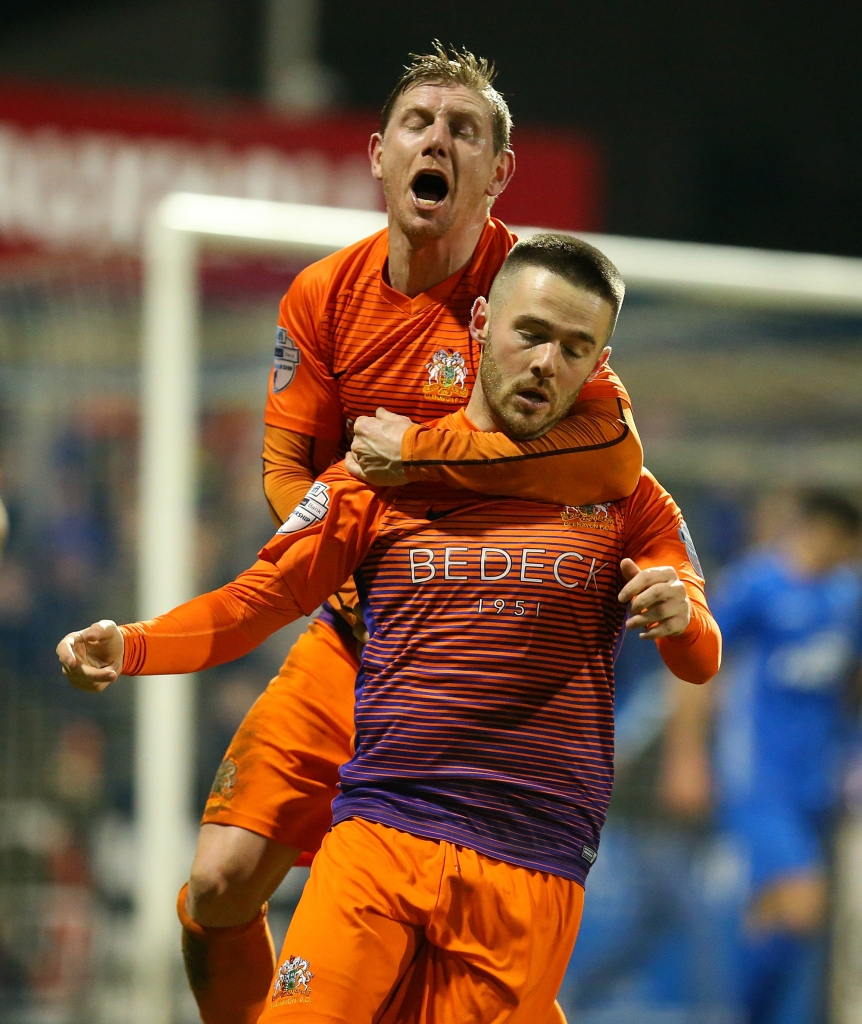 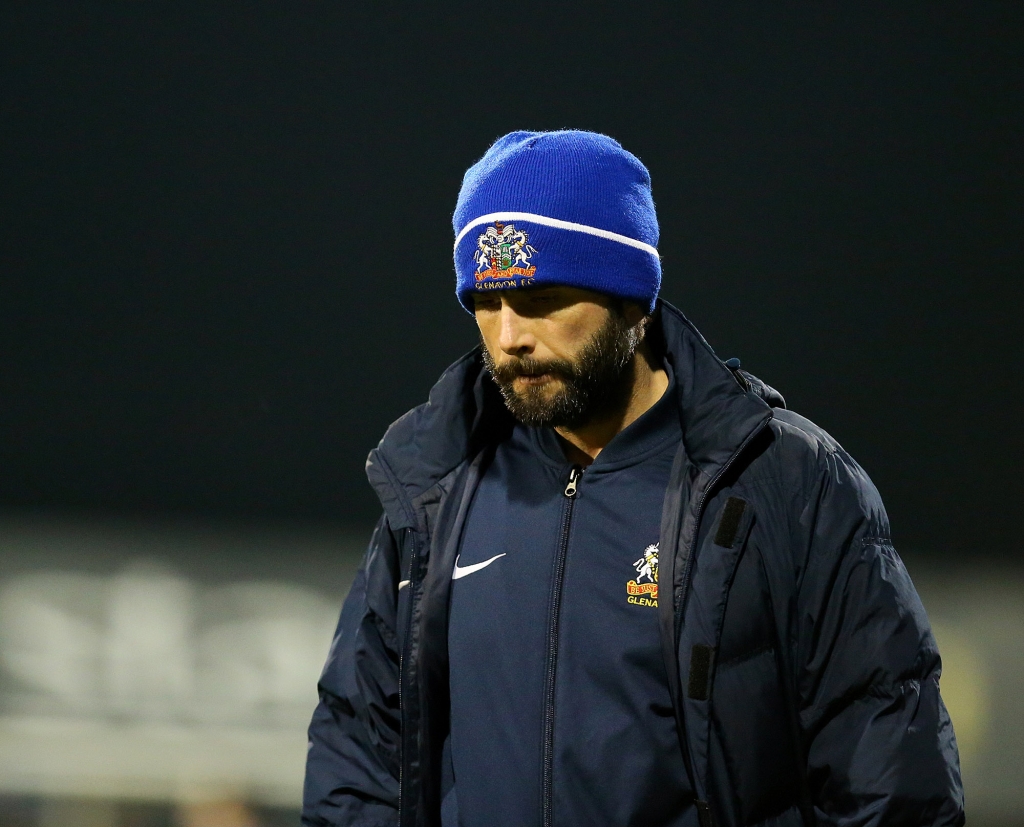