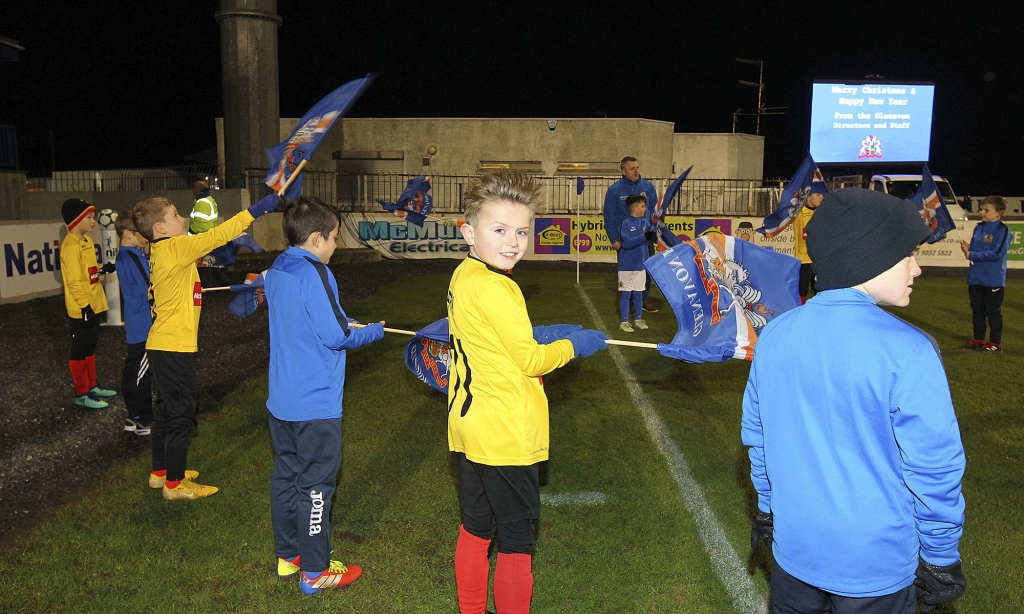 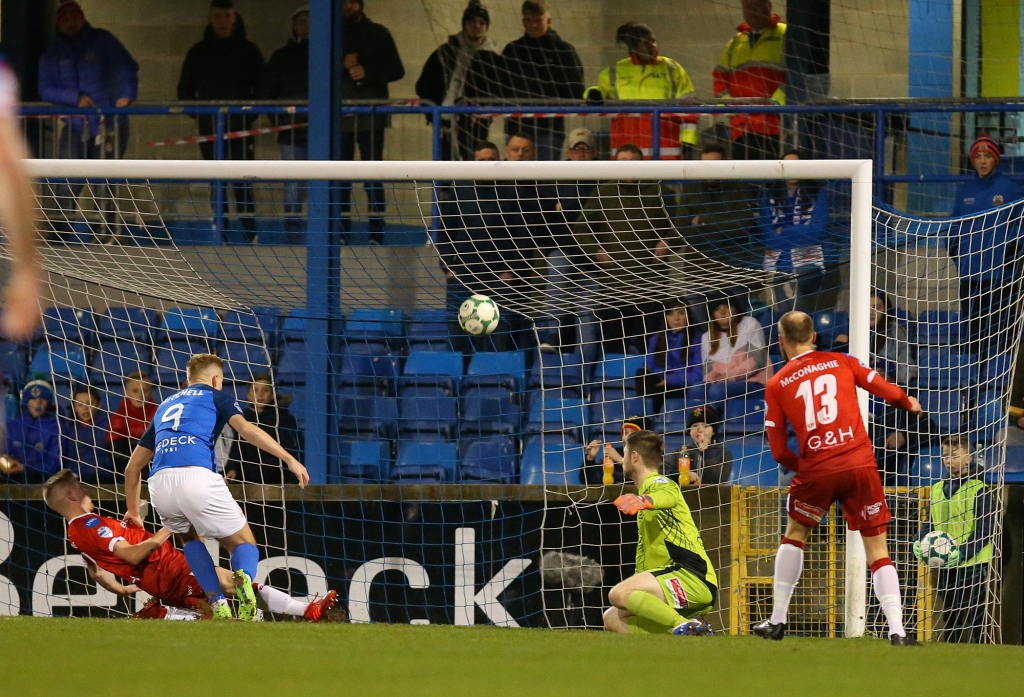 In tricky conditions in front of the BBC Sport NI cameras Glenavon withstood early Coleraine pressure to eventually triumph with second-half goals from Mark Sykes and Jordan Jenkins adding to a first half double from in-form striker Andrew Mitchell completing a 4-0 score-line.

Josh Daniels, who had been an ever present in the league, picked up a knee injury last week at Solitude so Ben Doherty moved to the left of midfield and Dylan King came back into the starting line-up with James Singleton reverting to left back. Sammy Clingan replaced Niall Grace after not being risked on the 4G pitch last Saturday. 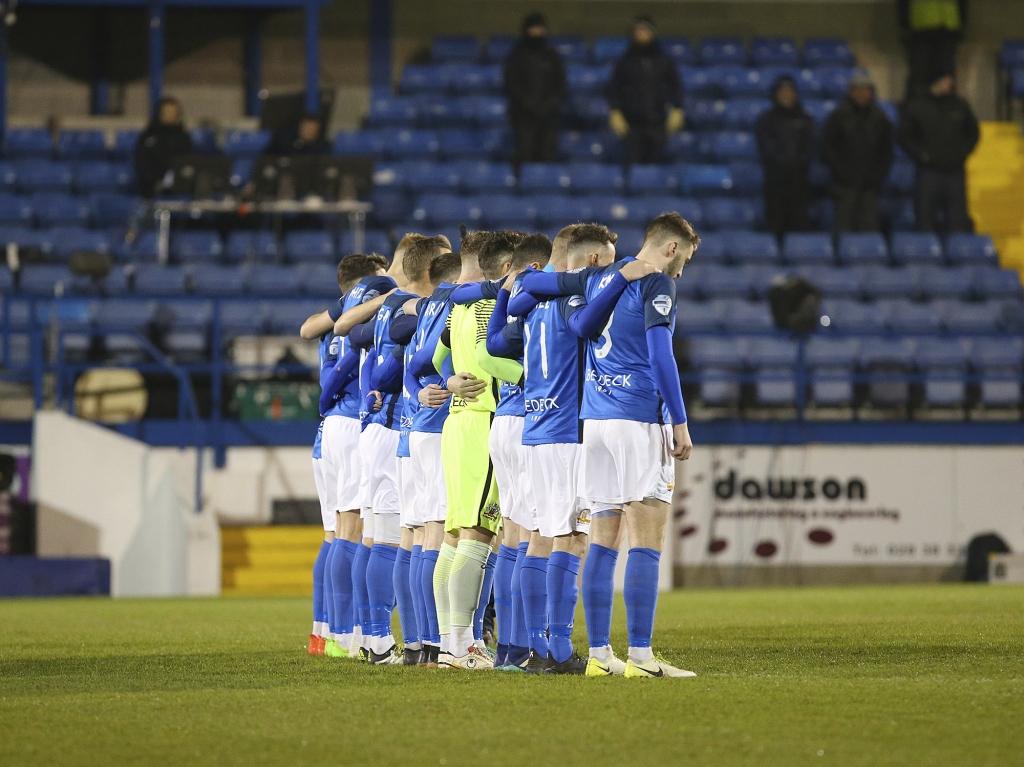 A minute’s silence was observed to mark the passing of former Glenavon manager Billy McClatchey. Photo by Alan Weir 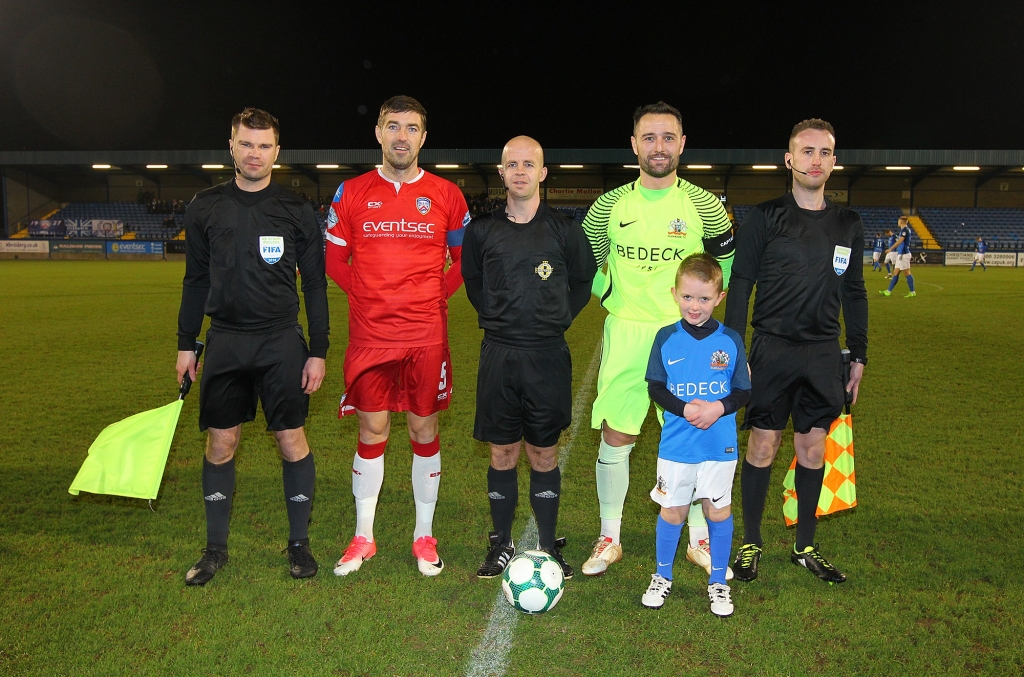 Coleraine forced the first corner of the game in the 4th minute which Darren McCauley whipped in low with Jamie McGonigle getting a slight touch that sent it wide of the far post.

Two minutes later it looked like Coleraine keeper Chris Johns had handled the ball outside his box as he came to the side of the penalty area to collect it but the officials weren’t as convinced as the home supporters in the Geddis Stand.

McCauley then fired a tame shot straight into Jonny Tuffey’s gloves as the visitors continued to enjoy the majority of the possession but without really creating any clear-cut chances.

In contrast, Glenavon went in front with their first clear chance of the game when, in the 12th minute, Andy Hall played the ball down the right for Conor McCloskey to run on to and, with the Coleraine defence appealing in vain for an offside flag, the former Ballymena player strode forward before delivering a low cross to the 6 yard box which Mitchell steered into the roof of the net. 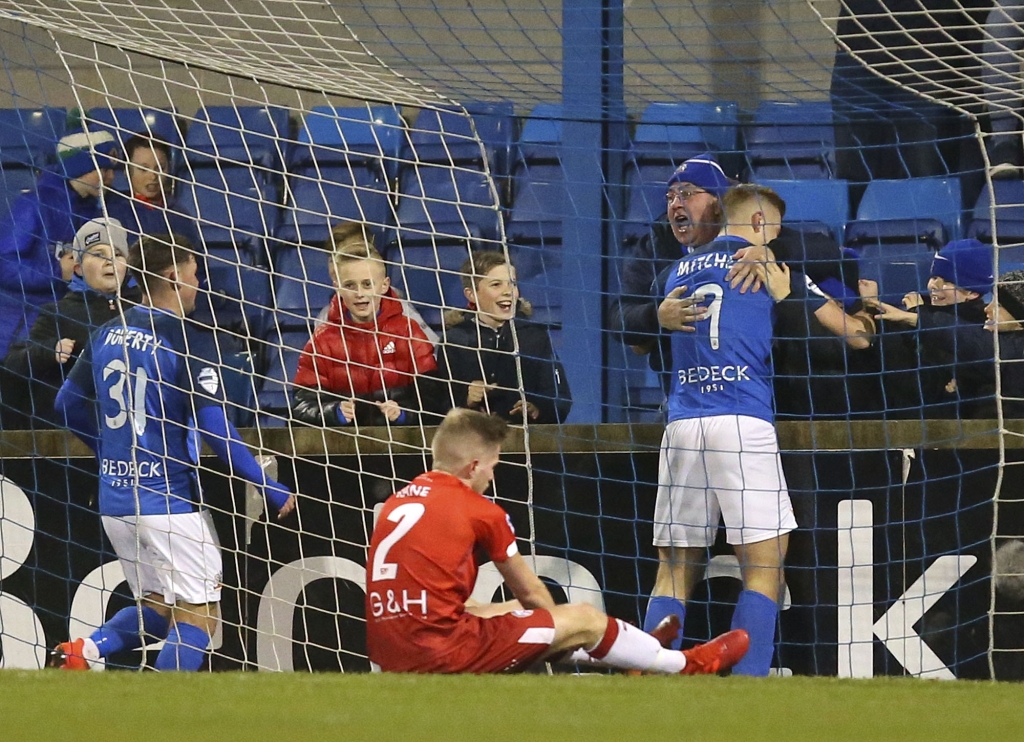 Andrew Mitchell celebrates with the fans behind the Crescent End goal. Photo by Alan Weir

Five minutes later Ben Doherty sent a low free kick from the right side of the Coleraine box across the goal mouth with Mitchell touching it on towards the back post where Dylan King was flagged offside as he played the ball back into the danger area.

Tuffey made a superb save in the 20th minute, racing out of his box to make a perfectly-timed tackle to deny McGonigle who had got clear of the Glenavon defence when a goal for the visitors would surely have swung the momentum back in their favour.

Two minutes later it could have been 2-0 to the hosts when Andy Hall robbed Bannsiders’ skipper Stephen Douglas on the edge of his own box and it took a great save by Johns to deny the Glenavon winger his 6th goal of the league campaign.

McGonigle then headed over from a cross by Eoin Bradley and Josh Carson sent a 25 yard effort well wide as Coleraine’s confidence seemed to be ebbing away after that bright start. Glenavon’s second probably was the killer goal as Mitchell was picked out by a superb ball over the top from Rhys Marshall and the striker, from wide on the right, glanced up before sending a cross-shot that sailed over the head of Johns and into the net to double Glenavon’s lead. Did he mean it? Probably not, but Mitchell’s 9th goal of the season certainly knocked the stuffing out of the visitors who could have gone further behind in the first half with Sykes firing just over the angle of post and bar and Hall almost scoring direct from a corner, the ball crashing back off the bar with Johns struggling to get a hand to it.

The second half saw Glenavon, now with the wind at their backs, continue to create the better chances. Mitchell was denied his hat-trick by a brilliant save by Johns in the 48th minute after McCloskey flicked on Caolan Marron’s clearance into the striker’s run, the keeper getting enough of a hand to the powerful strike to divert it over the bar.

McCloskey then had to come off with what looked like a hamstring problem, Stephen Murray coming on to replace him in the 54th minute.

Ian Parkhill replaced the largely ineffective McGonigle just before the hour mark but it was Sammy Clingan who had the first chance minutes later when his powerful strike was well blocked en-route to goal by Lyndon Kane.

Aaron Canning then sent a dangerous ball into the Glenavon box which Marron got his head to, to clear for a corner which came to nothing for the Bannsiders.

Murray’s neat hold-up play on the edge of the Coleraine box setup Glenavon’s third goal which came in the 67th minute as he laid the ball off to Sykes and the midfielder took the ball in his stride and stroked it past Johns from 12 yards. 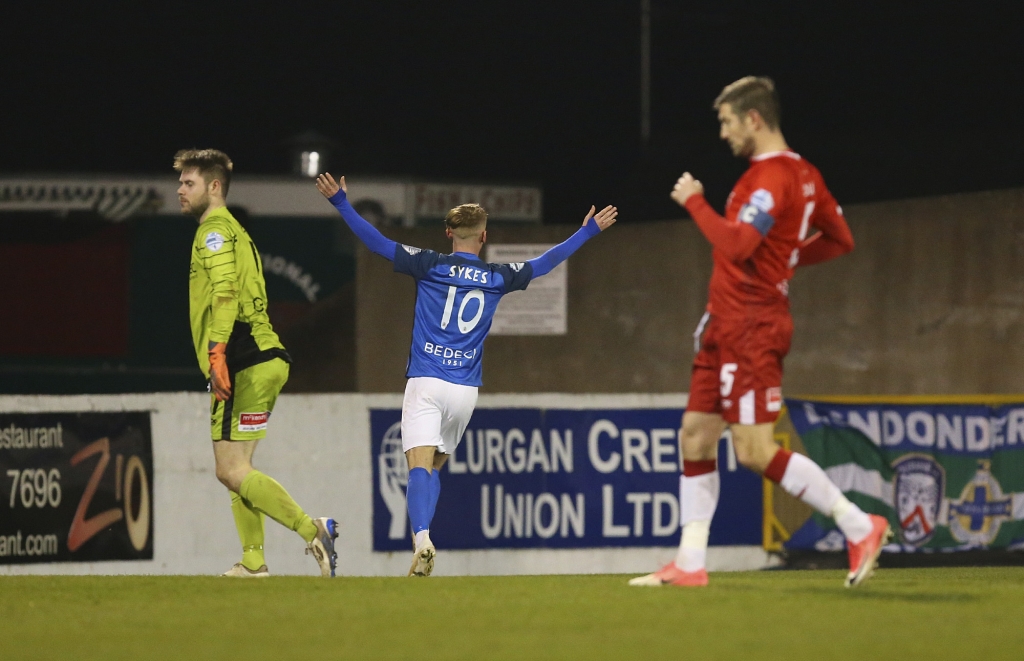 Worryingly for Glenavon, Mitchell seemed to pull up in the build-up to the goal and he was replaced moments later by Jordan Jenkins. Hopefully the big striker will be fit to face Linfield next Saturday.

Veteran defender Douglas made a great block to deny Doherty a goal after he was picked out by Murray’s cross before McCauley at the other end tried a shot from the right side of the box that was always curling wide of the far post.

Douglas was on hand again to clear a header from Marshall off the line as the Glenavon defender got on the end of Doherty’s in-swinging 76th minute corner. 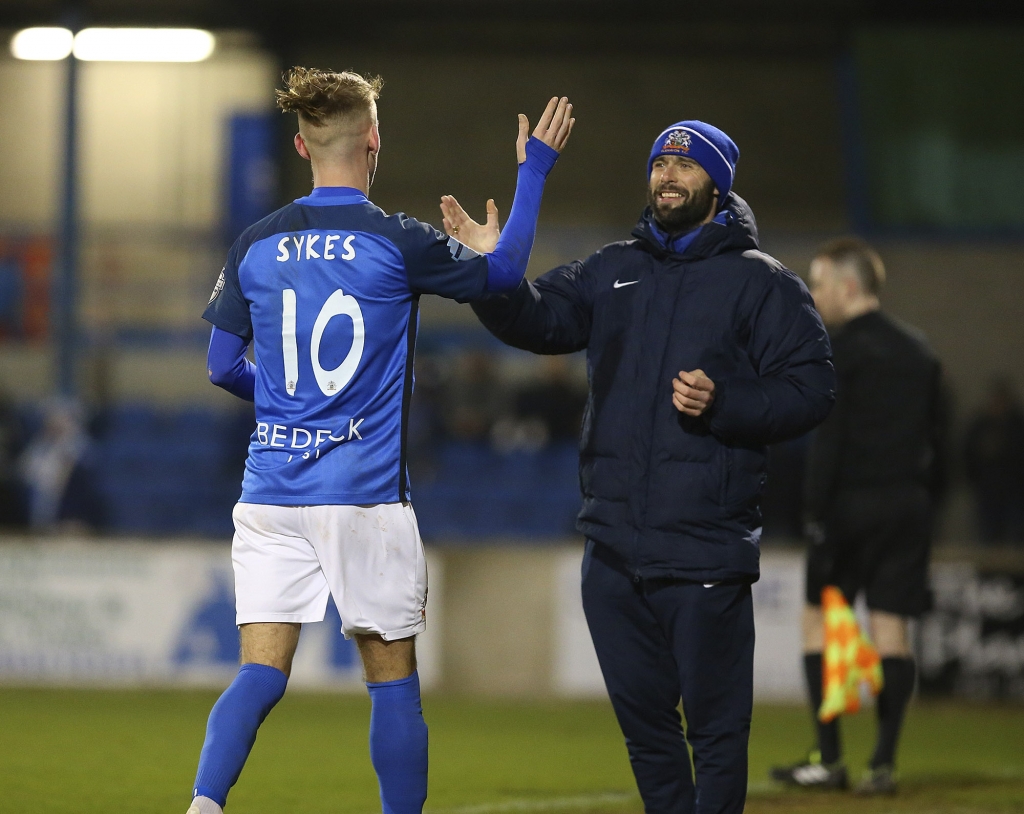 Gary Hamilton congratulates Mark Sykes as he is substituted. Photo by Alan Weir

With five minutes to go Mark Sykes came off to a standing ovation from the home fans as he was replaced by Aaron Harmon and two minutes later Jenkins put the finishing touch to a very important victory for the home side when he neatly controlled the rebound after Murray’s effort had been blocked before slotting the ball beyond Johns.

Next Saturday Glenavon travel to Windsor Park to take on second-placed Linfield knowing that, following the postponement of Linfield’s game with Newry City today, a win would move them above David Healy’s side but they’ll be hoping that the injuries to Mitchell and McCloskey aren’t too serious. 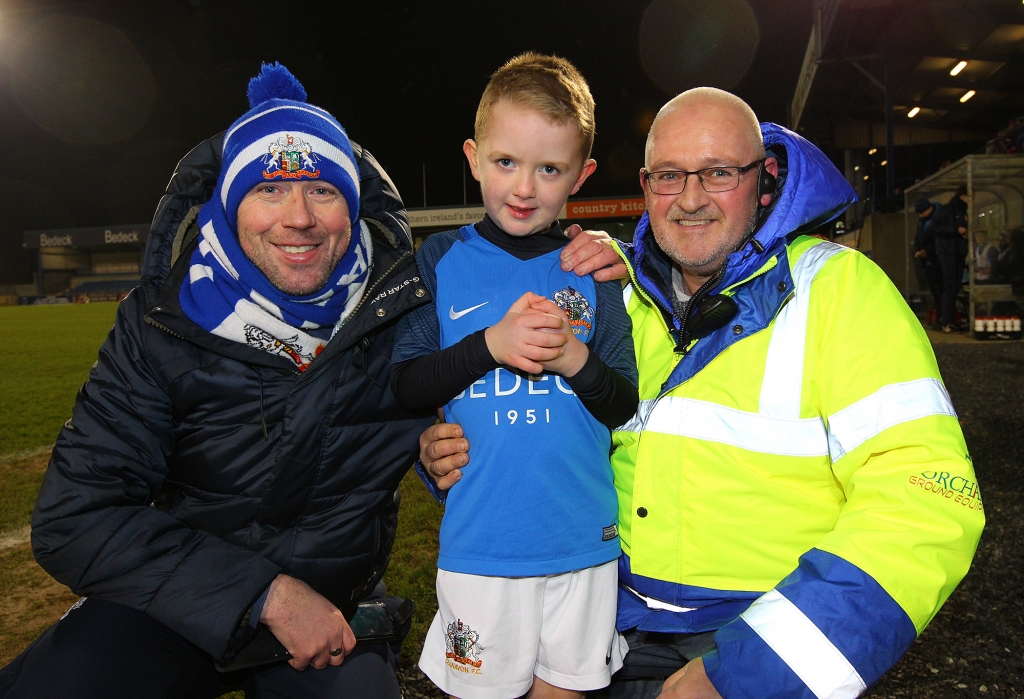 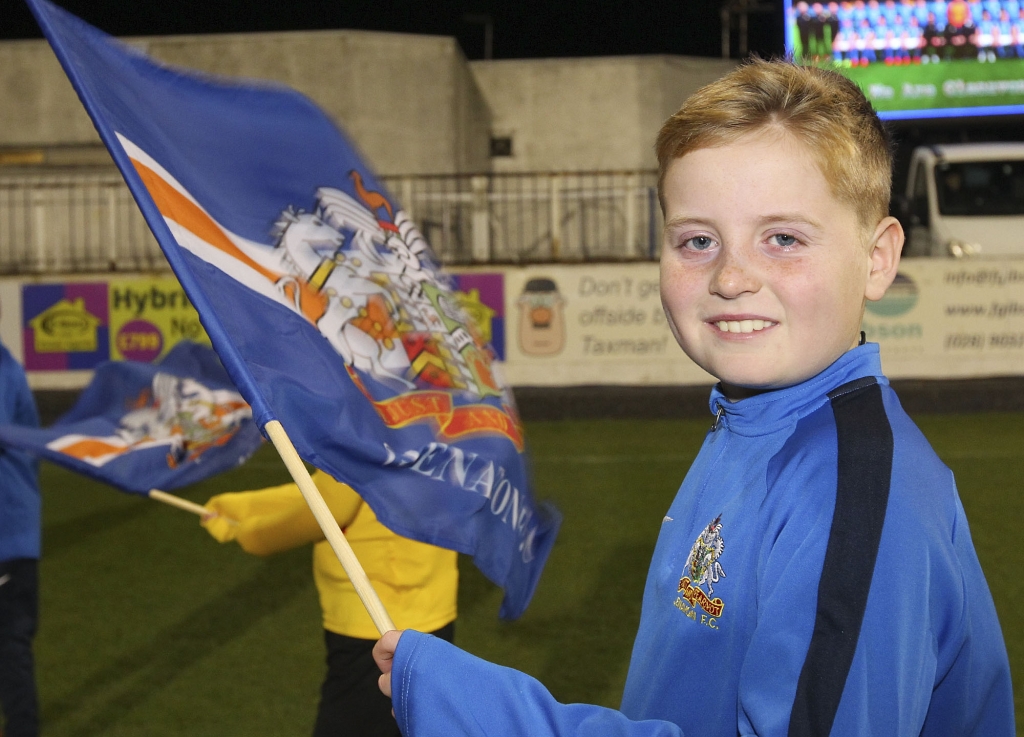