A Glenavon side badly depleted by injuries and suspensions suffered a last-gasp 3 – 2 defeat away to Dungannon Swifts on Friday night.

Daniel Hughes had given the Swifts a two-nil lead with strikes either side of half-time, the second of which came from the penalty spot, but Glenavon hit back with two quick goals to level matters, the first from substitute Robbie Norton, and the second an exquisite free-kick from Sammy Clingan.

By that stage the visitors had their tails up and smelled an opportunity to leave Stangmore Park with all three points, but it was the hosts who nicked it at the death when Seanan Clucas headed in former Glenavon winger Mark Patton’s cross.

Dungannon had a good opportunity in the opening minute when Jarlath O’Rourke beat Josh Daniels wide on the left and picked out Cormac Burke with a cross. Burke jinked inside Rhys Marshall before attempting to curl the ball inside the far post with the outside of his right boot, but his effort went wide.

Five minutes later the Swifts threatened again. Hughes got the better of James Singleton with some neat footwork close to the byline, then, as Jonathan Tuffey raced out to meet him, Hughes pulled the ball back for Alan Teggart. Kris Lindsay got in a vital block to deny the winger.

Glenavon didn’t enjoy a first real spell of pressure until just before the 15-minute mark, but just when it looked like they might have fashioned a scoring opportunity Marc Griffin was flagged offside.

On 17 minutes Joel Cooper whipped over a dangerous cross with his right foot but none of his teammates could get on the end of it.

Griffin had a pop from distance which didn’t go too far over the bar after he’d been laid off by strike partner Stephen Murray in the 22nd minute.

Glenavon’s number 10 was involved again three minutes later, but this time he was caught on the ball in the centre circle and it led to the Swifts’ opening goal. Griffin came short to receive the ball and was looking for the next pass when Grant Hutchinson nipped in to rob him of possession. Hutchinson slid an excellent through ball into the path of Hughes, and the striker made no mistake, placing his low finish past Tuffey and into the net to make it 1 – 0.

Dungannon really should have been taking a two-goal lead into the break. Burke picked Clucas out with a corner-kick and the defender headed over the bar when he looked certain to score.

Glenavon started the second period much brighter, and they might have equalised three times in the first five minutes of the second half.

First Griffin hooked a dangerous cross in over his shoulder which went narrowly wide of the far post, then Cooper fizzed a low cross in which just evaded both Eric Foley and Daniels. Finally, Cooper picked out Griffin with a cross, and when the striker couldn’t bring the ball under control it found its way back to the winger, only for his right-footed effort to go straight into the arms of Dungannon keeper Andy Coleman. 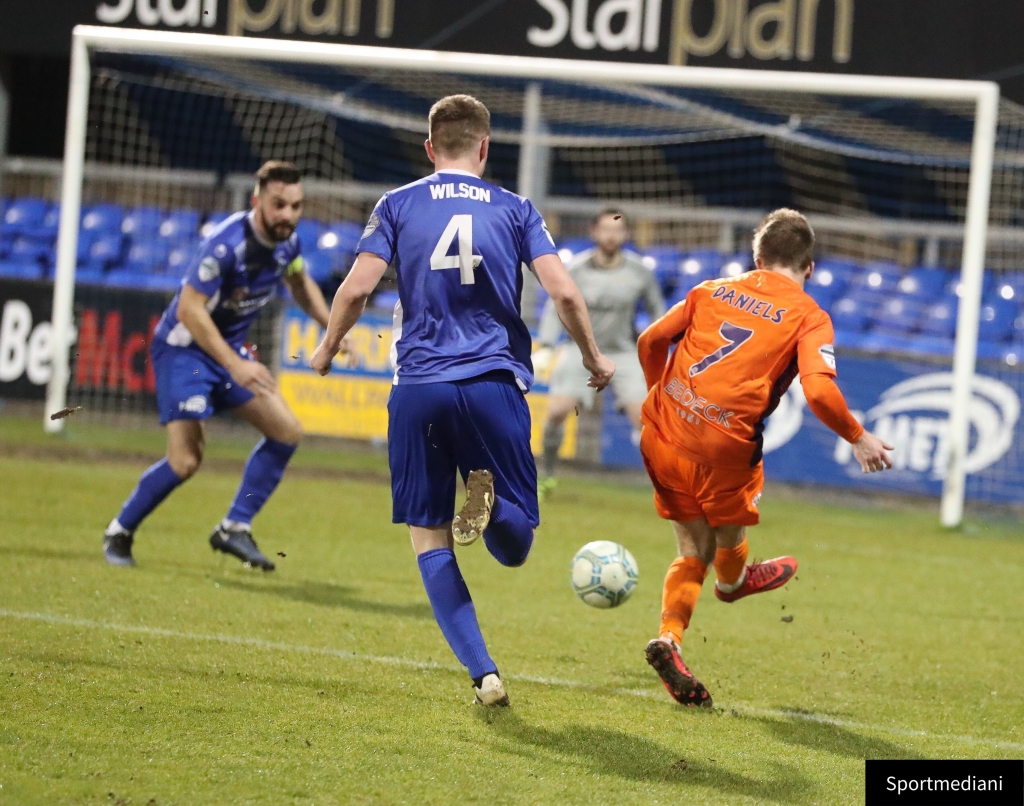 Josh Daniels puts the ball into the Swifts box. Photo by Maynard Collins

Just after the hour mark the Swifts had another excellent chance at a corner-kick. This time Burke picked out the head of Dougie Wilson. With Tuffey well beaten, it was Andy McGrory who cleared the ball off the line.

Dungannon did double their lead on 74 minutes. Clucas played a long ball down the right flank for Kris Lowe to run onto, and Cooper pulled him back as they approached the penalty area. Referee Raymond Crangle decided that the infringement had occurred inside the box and he pointed to the spot. Hughes stepped up and placed his penalty inside Tuffey’s left-hand post to put the hosts two goals in front.

At that point it looked as though Glenavon were going to go out with a whimper, but the Mourneview men suddenly sprang into life and struck twice inside five minutes to haul themselves level.

A minute after the penalty Lindsay played a high ball into the Dungannon box and Cooper managed to nod it down for substitute Norton. The young midfielder lashed his low effort past Coleman to reduce the deficit to a single goal. 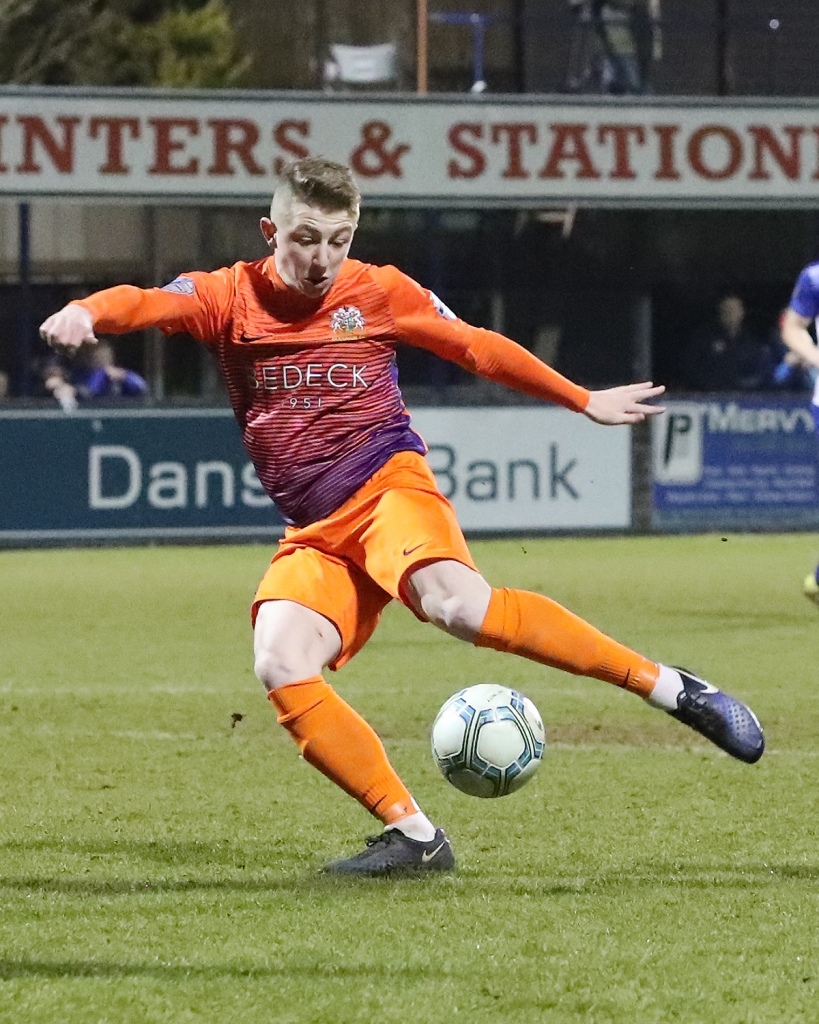 Three minutes later the visitors were awarded a free-kick 20 yards from goal. Clingan took it, and he struck a beautiful shot which went over the wall, then dipped, struck the underside of the crossbar and bounced up and over the line to level the score. 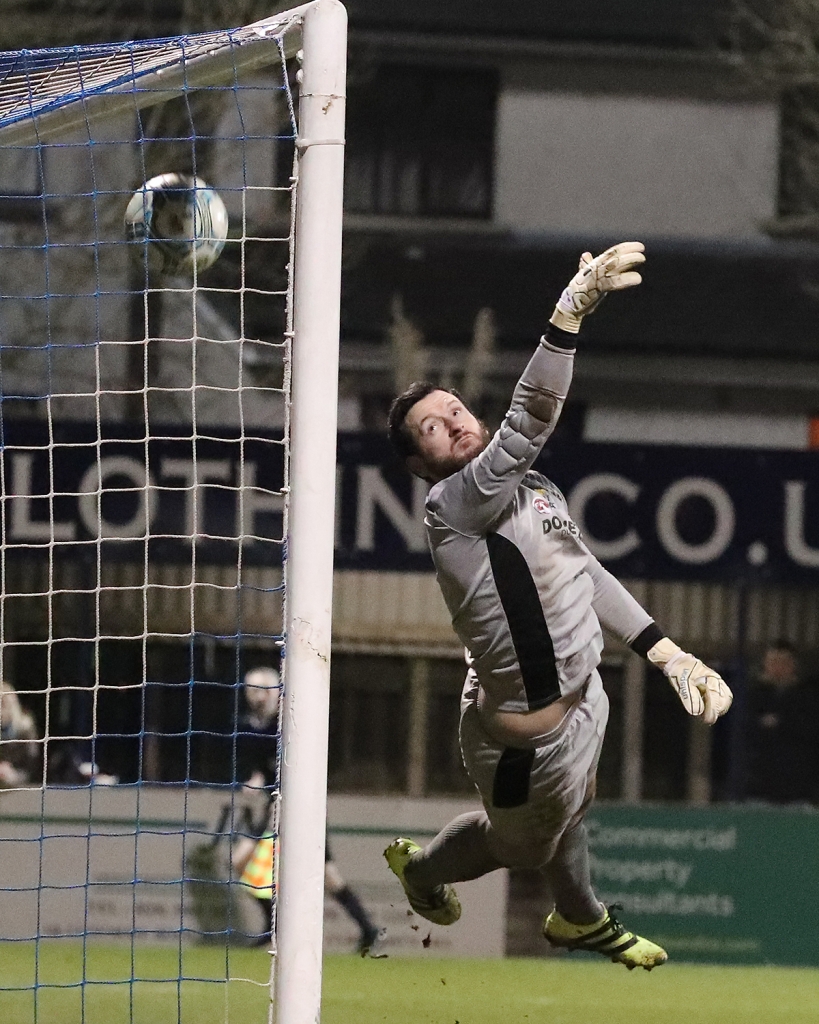 The momentum was with Glenavon, and they went in search of a third. Norton took a quick throw-in which got Murray in behind the Swifts backline. He attempted to pull the ball back for substitute Steven McCavitt, but he could only play it behind his strike partner.

Norton and Murray were involved again in the final minute of normal time. Murray was almost in, only for Coleman to race out of his goal and make a smart save at the striker’s feet. The ball fell to Norton, but his shot on the half-volley went over the bar.

As it turned out, it was Dungannon who secured all three points in the second minute of injury time. Former Lurgan Blue Patton played an excellent cross in from the right flank with his left foot to pick out Clucas. The defender’s header was an outstanding one, a looping effort which dropped just below the crossbar and gave Tuffey no chance.

The manner of this defeat will be a particularly bitter pill for Glenavon to swallow, especially as it comes at the end of what has been a very disappointing month for the Lurgan Blues.

It’s Irish Cup semi-final weekend next Saturday, so Glenavon will have no match, and the post-split fixtures have not been finalised yet as there are league games which still need to be played in order to determine the standings before the Premiership table splits in two.