Glenavon picked up their second consecutive win of the festive period with a 1 – 0 victory over Warrenpoint Town at Mourneview Park on Boxing Day.

Rhys Marshall’s header on the half-hour mark proved to be the difference between the sides in what was a scrappy game.

Neither side created any real opportunities in the opening stages of the match. On 21 minutes an excellent sliding block was required from Marshall to cut out a Darren Murray cross. Glenavon broke from the resulting corner, with Mark Sykes surging forward into the Warrenpoint half, but the counter attack broke down when he fed the ball to Marc Griffin. 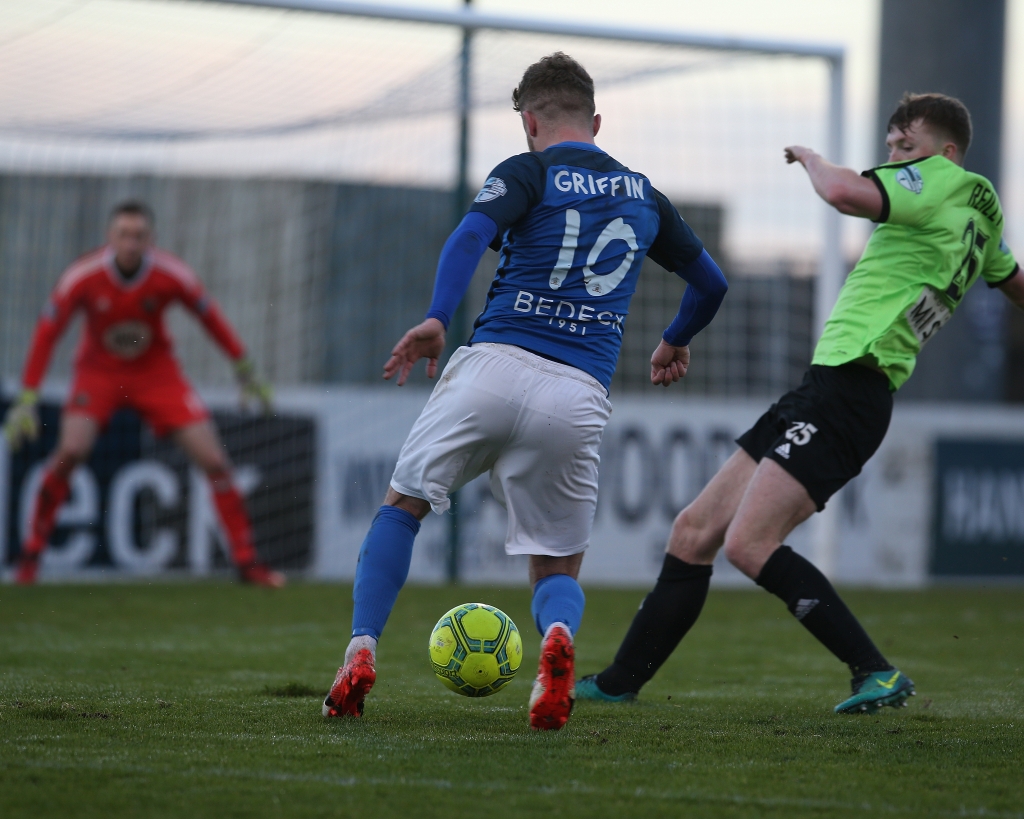 Two minutes later Stephen Murray really should have done better with his header after he had been picked out by captain Sean Mackle’s cross from the left, but he could only glance his effort wide.

Some good build-up play between Griffin and Josh Daniels created an opportunity for the former on 25 minutes, but Warrenpoint goalkeeper Jonny Parr was equal to the striker’s effort.

Parr was beaten by a Marshall effort a minute later, only for the post to come to his rescue. Man of the match Andrew Doyle strode forward and picked Marshall out on the right. The ball broke kindly for the right-back when he was challenged by Martin Murray and he swivelled to get a low shot away with his left foot which struck the upright.

Five minutes later, however, Marshall was not to be denied. He intercepted Mackle’s pass himself close to the centre circle and burst forward before playing the ball to Sykes. The midfielder then slipped it to Andrew Mitchell inside the penalty area. The striker’s effort was deflected but it found Marshall at the back post and he nodded the home side in front. 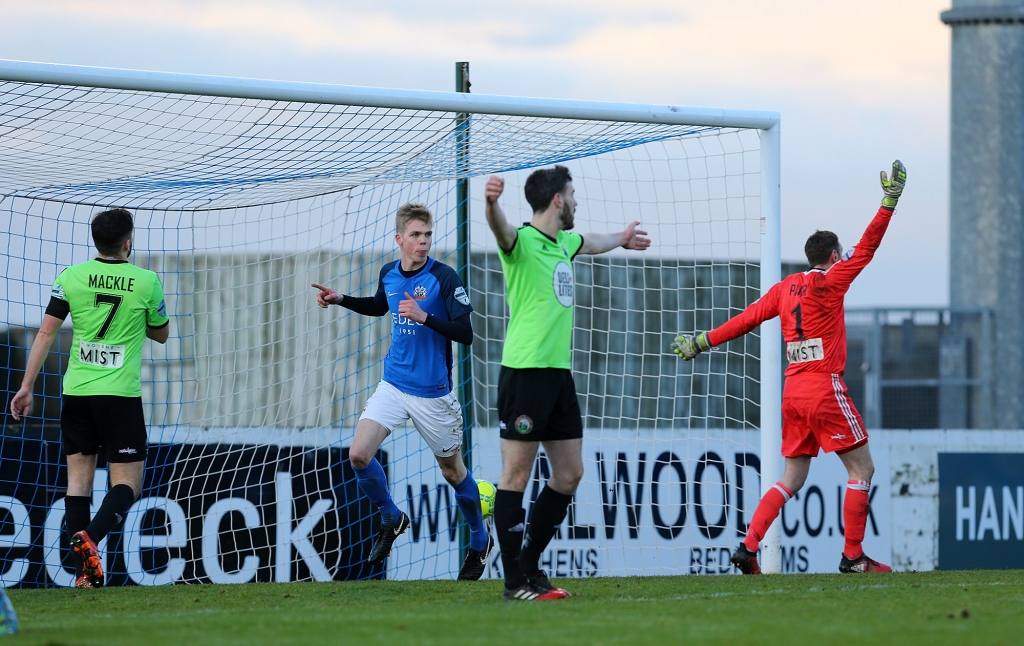 Warrenpoint might have levelled matters on 35 minutes but for an excellent block by Caolan Marron from Liam McKenna’s shot.

Glenavon had a couple of half-chances to add to their lead before half-time. Daniels got on the end of a long ball into the penalty area and nodded down for Griffin, but the striker was stretching as he connected with the ball and he couldn’t hit the target. Afterwards Sykes dragged a shot wide.

Early in the second period Andy McGrory was unlucky not to add a second for the Lurgan Blues. Conor McMenamin’s poor clearance found McGrory on the right and the winger flashed his effort just wide of the far post from 25 yards out.

McGrory had another opportunity just before the hour mark when he was picked out by a brilliant diagonal ball into the penalty area by Sammy Clingan, but he couldn’t keep his shot down. 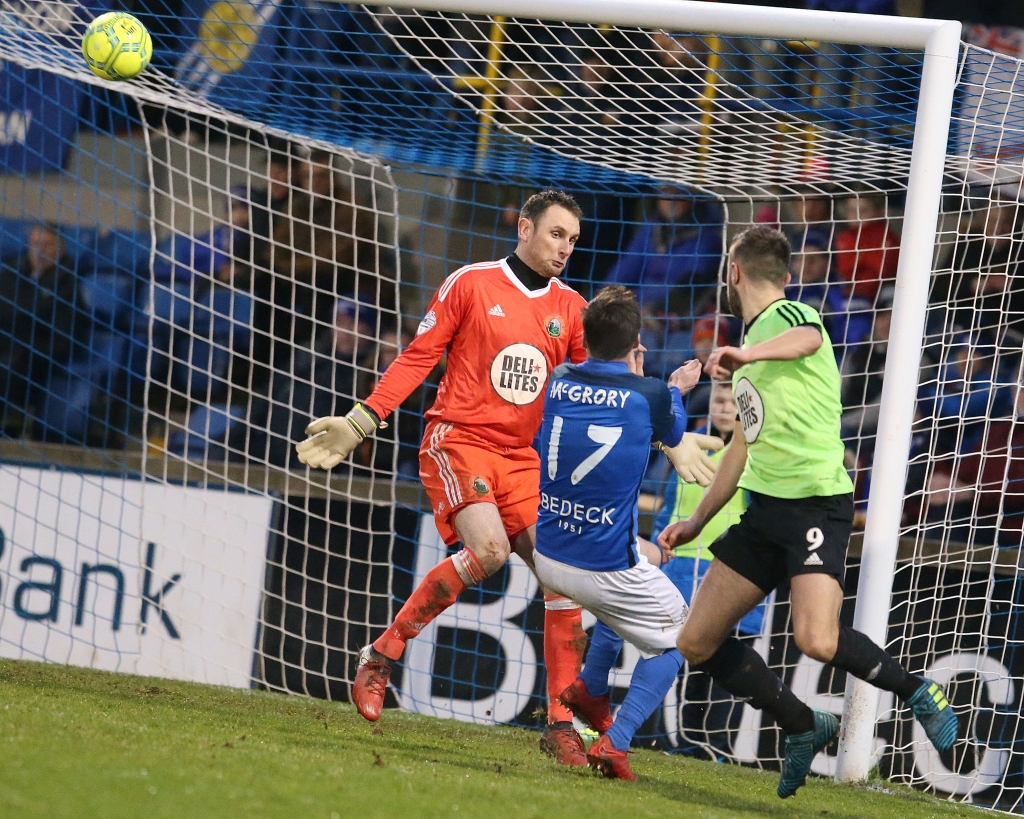 Andy McGrory can’t keep his effort down when under pressure from Warrenpoint defender Conor McMenamin and goalkeeper Jonny Parr. Photo by Maynard Collins

Warrenpoint wasted a golden opportunity to equalise in the 62nd minute when the three Murrays combined. Parr’s goal-kick was headed on by Darren to Stephen, who then played the ball out to Martin on the corner of the penalty area. The winger failed even to work Jonathan Tuffey, slicing his left-footed shot wide of the near post.

Late on the visitors had three chances in quick succession. First McKenna played the ball forward to Darren Murray. He played a neat one-two with namesake Stephen, but just when it looked like he was going to get a clear opportunity on goal the danger was smothered by Marshall, Clingan, Bobby Burns and Marron. However, Marron’s clearance only found Danny Wallace. He played it into the feet of McKenna in the centre circle. The midfielder then played an excellent ball forward for substitute Darius Roohi. Roohi shot straight at Tuffey, but the ball fell for Stephen Murray. He dragged his shot wide when under pressure from Doyle, and Glenavon held on for the victory. 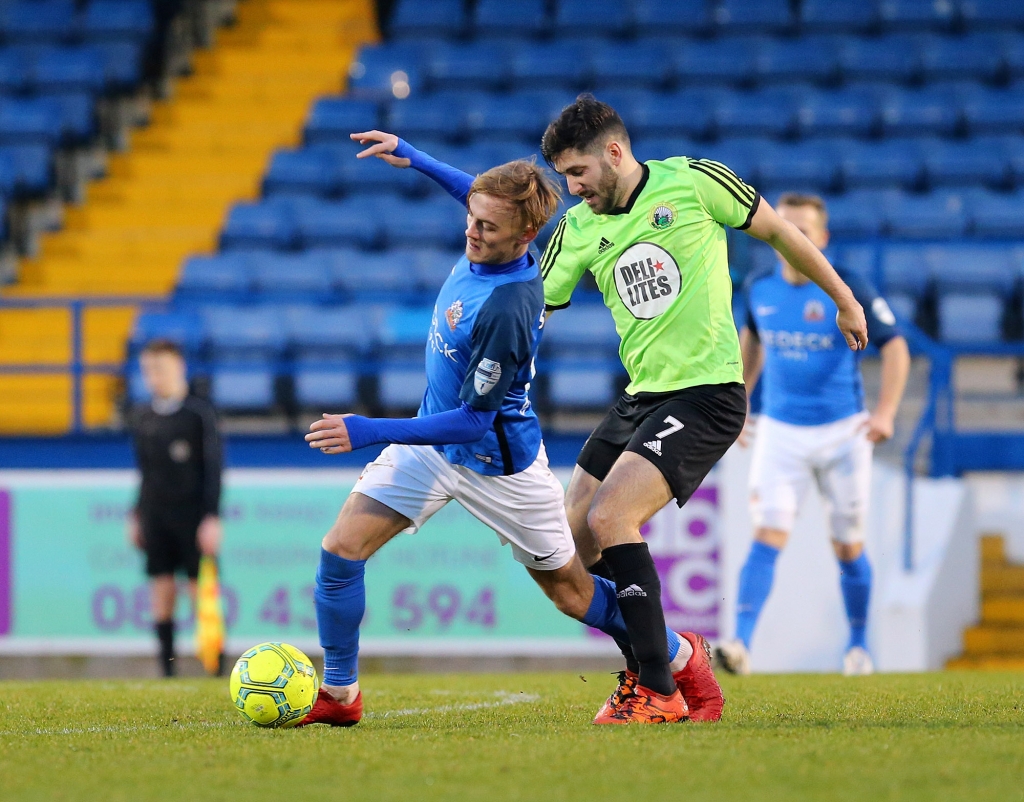 Glenavon player-coach Kris Lindsay said after the match that Warrenpoint will be very disappointed that they didn’t take something from the game, and it would be hard to argue with that assessment. However, Lindsay and the rest of the Glenavon coaching staff will have been pleased that their side displayed the ability to pick up three points when playing well below par.

Defeats for Linfield and Cliftonville on Boxing Day mean that Glenavon are now five points clear of both sides in the Premiership standings, while Coleraine’s draw with Ballymena United saw the Lurgan Blues’ deficit to the league leaders cut to 10 points, and Gary Hamilton’s side also have two games in hand on the Bannsiders.

Saturday (December 30th) sees Glenavon travelling to the Ballymena Showgrounds to take on David Jeffrey’s seventh-placed United side. This season’s two previous meetings between the teams have produced no fewer than 11 goals, with 10 of those having been scored by Glenavon.