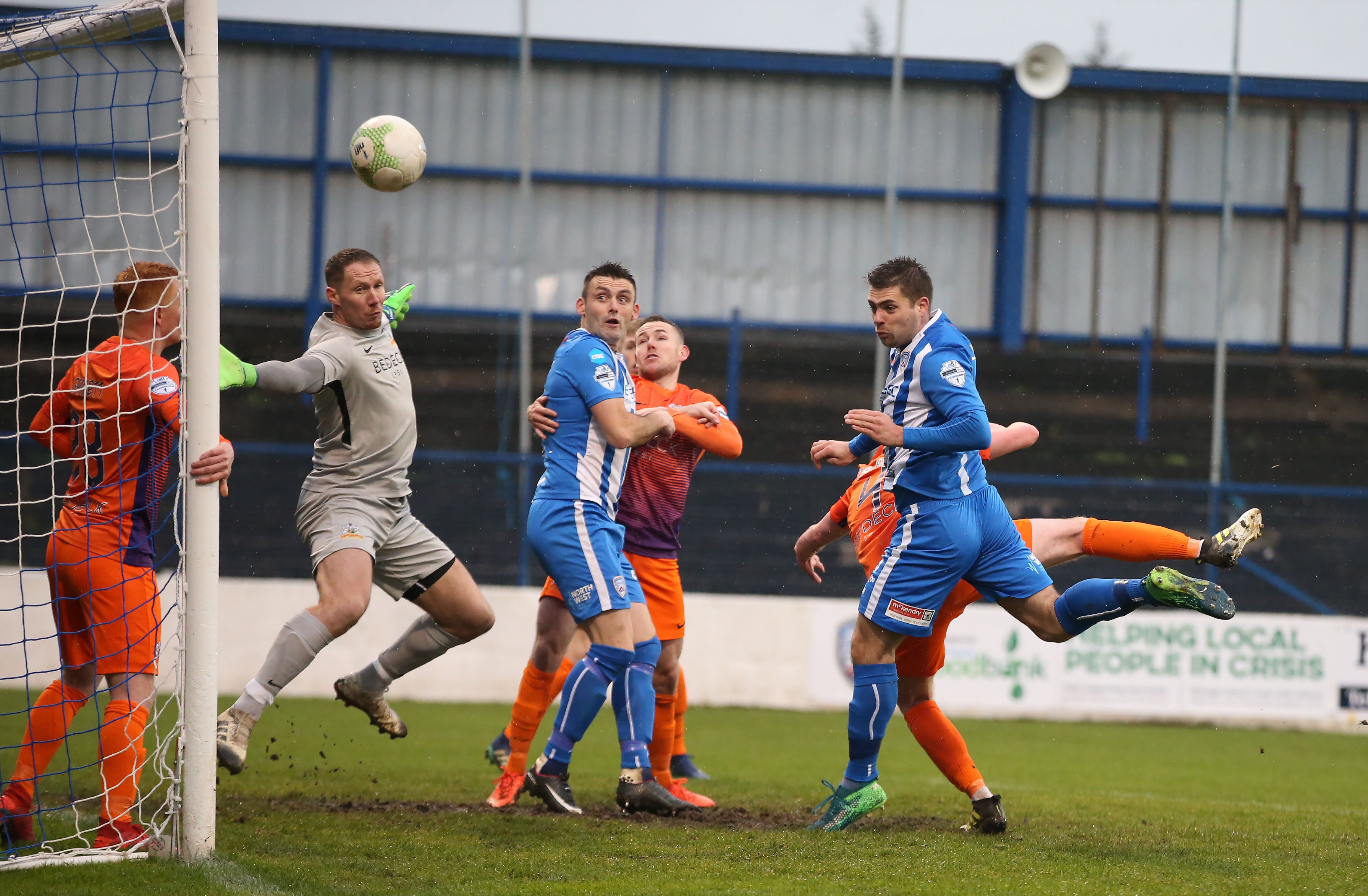 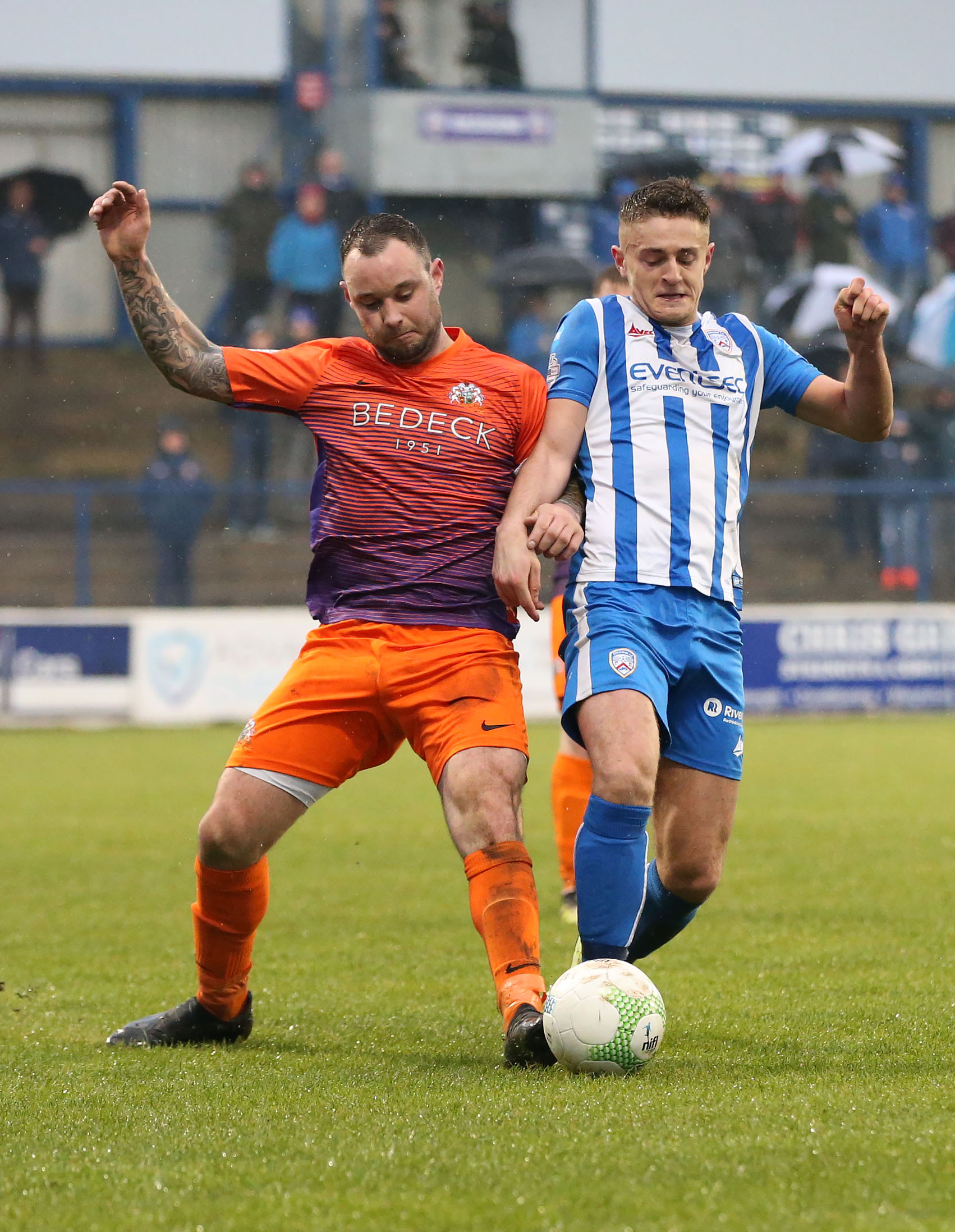 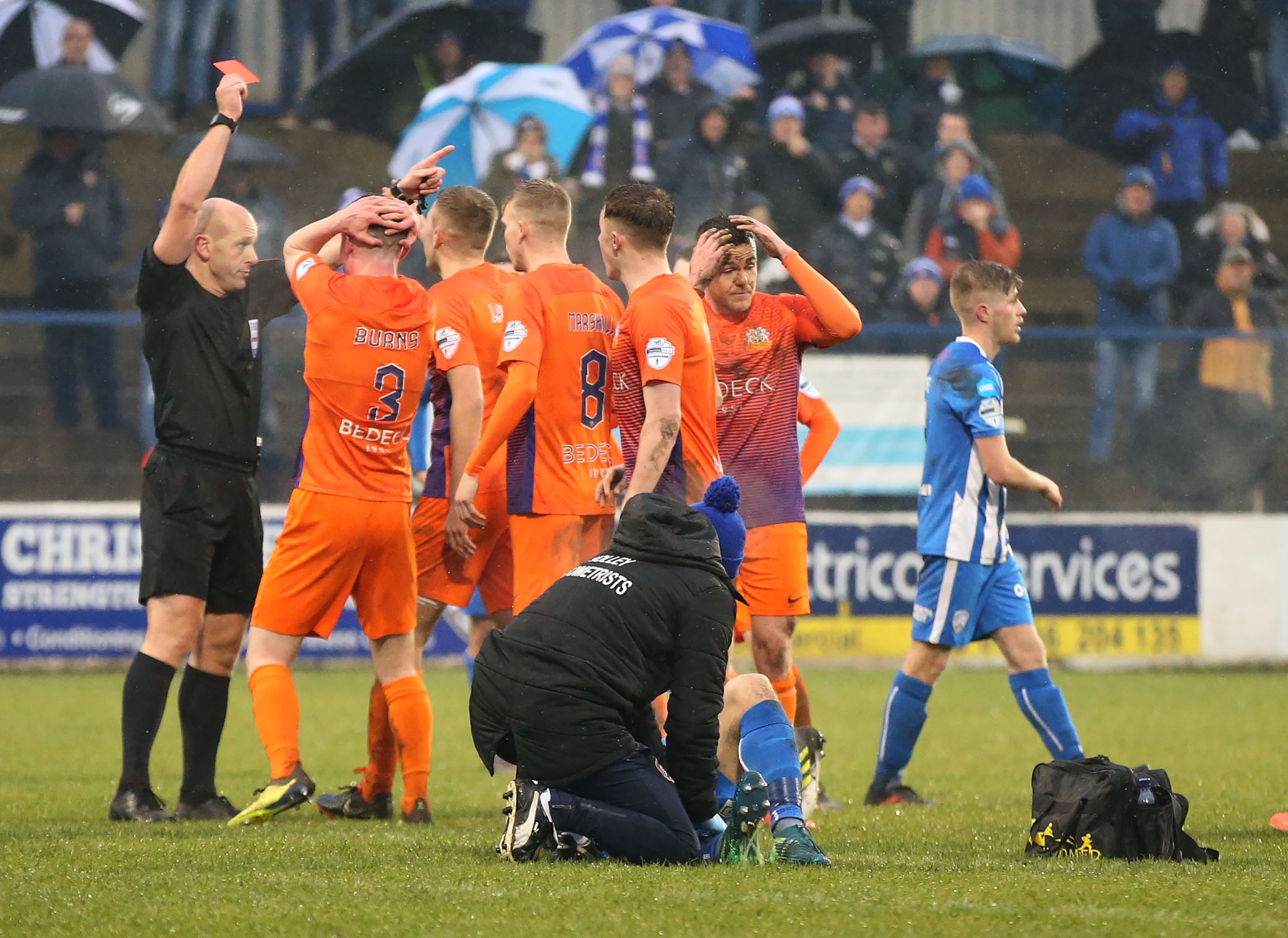 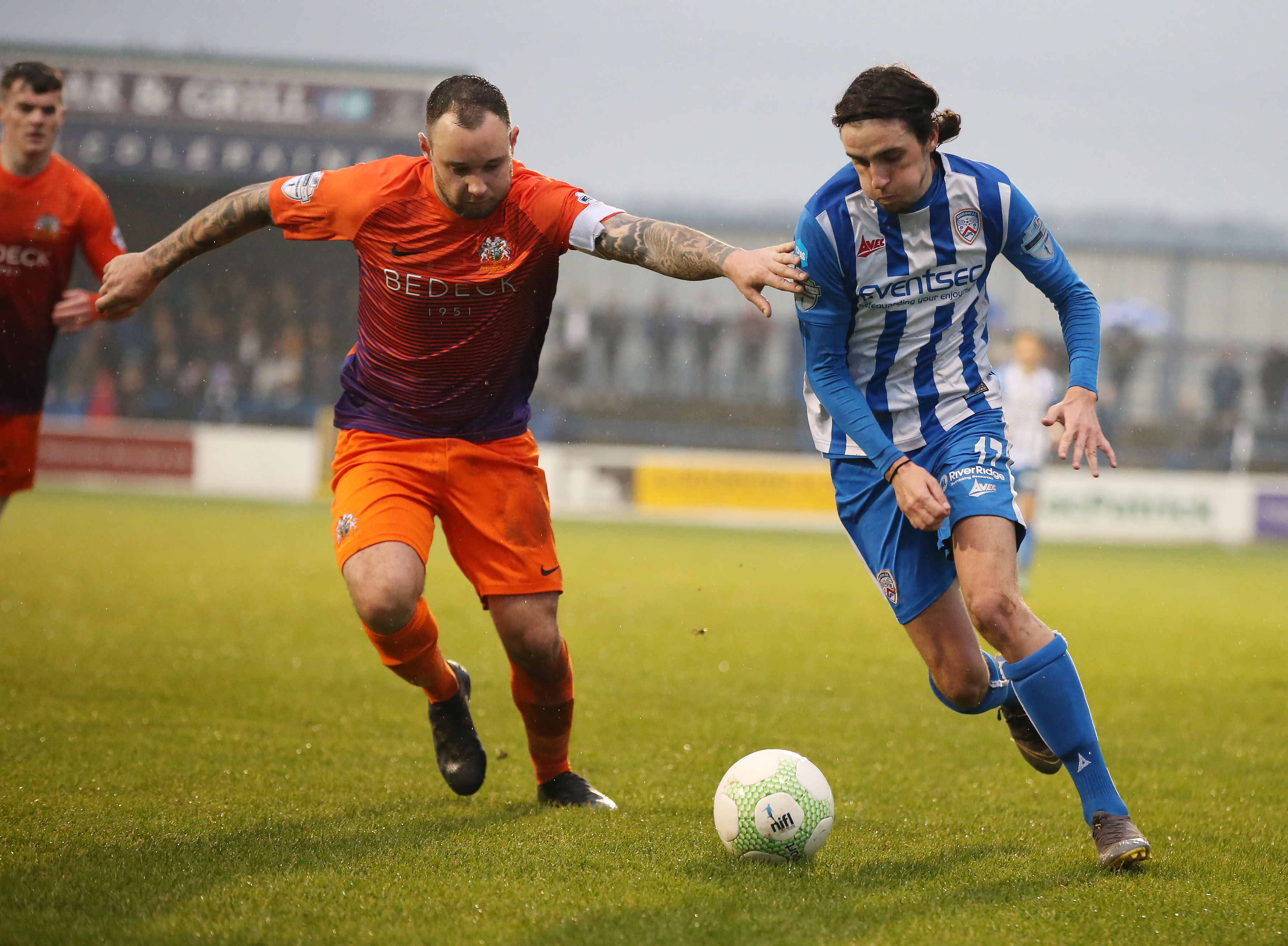 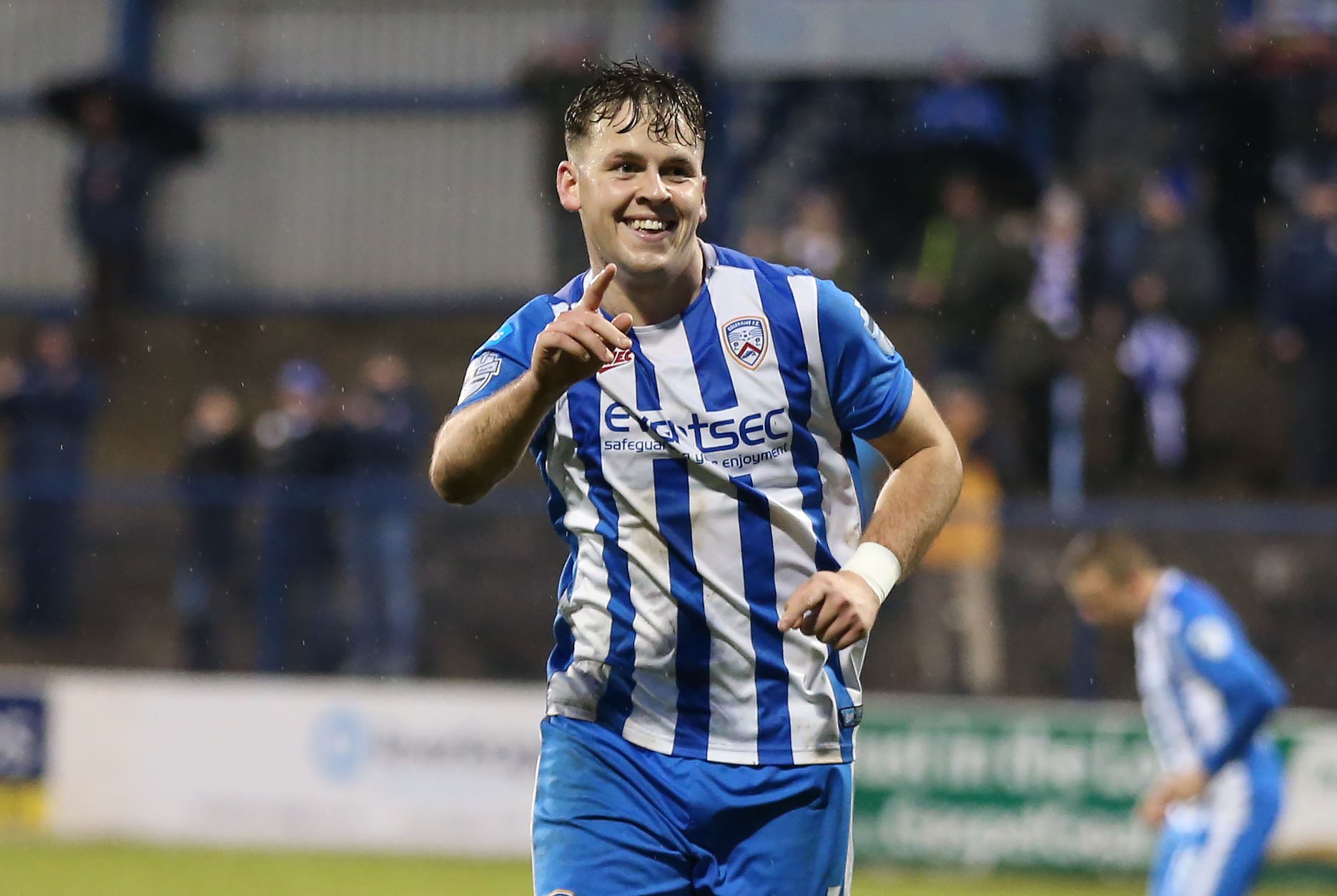 Glenavon were defeated 4-0 by league leaders Coleraine for the second time this season at the Showgrounds on Saturday.

James McLaughlin scored a hat-trick, two of his goals coming in the first half and one midway through the second, while former Glenavon player Ben Doherty rounded the scoring off with a penalty on 77 minutes.

However, many would argue that the course of the game was shaped by the controversial decision to show Glenavon defender Daniel Larmour a straight red card late in the first half.

Glenavon started the game brightly, with Jordan Jenkins seeing a shot blocked by Steven Douglas on three minutes, while the young striker then dragged a low shot wide of Chris Johns’ far post three minutes later after he’d been teed up by strike partner Andrew Mitchell.

Caolan Marron almost picked Jenkins out with a cross from the right flank in the eighth minute, but it went just over the head of the young striker.

It was the hosts who took the lead against the run of play a minute later. Doherty whipped a corner over from the right and McLaughlin challenged for the ball with Marron and managed to head into the net to open the scoring.

Marron whipped in a dangerous cross from the right on 19 minutes, but nobody could get on the end of it for Glenavon.

In the 27th minute Aaron Harmon picked Mitchell out with a low cross from the right. The striker controlled the ball and spun before firing a shot towards goal, but it went over the bar.

On 35 minutes Harmon’s cross deflected off Aaron Traynor and struck the crossbar. The ball then fell for Kyle Beggs. The winger’s shot was saved by Johns, but he could only palm it out to Mitchell. The Glenavon striker got his shot all wrong and could only hit a tame effort that went straight into the arms of Johns, but it didn’t matter anyway as the linesman had raised his flag for offside.

The game’s moment of controversy arrived in the 38th minute. McLaughlin played a pass through for Eoin Bradley to chase, but Daniel Larmour was ahead of the former Glenavon striker in the race for the ball. It appeared as though Bradley pulled Larmour back, but the Glenavon defender managed to shepherd the ball away from Bradley nevertheless. However, as Larmour turned away with the ball he took a heavy touch which invited a tackle from McLaughlin. Larmour’s heavy tackle on the Coleraine striker was rash, but referee Arnold Hunter played advantage as the ball broke for Bradley. Hunter then blew his whistle for offside when he noticed that the linesman had raised his flag. With advantage coming to naught, Hunter and the linesman spent several moments conversing about Larmour’s challenge on McLaughlin and the referee ultimately decided to show a red card to the Glenavon defender, a decision which infuriated the travelling support.

The game was effectively over when McLaughlin scored his second goal on the stroke of half-time. Douglas’ long headed clearance completely caught out the Glenavon defence and sent Bradley through on goal. James Taylor made an excellent save, diving at the feet of Bradley to knock the ball away from the striker as he tried to round him, but it broke for Bradley and he squared it for McLaughlin, who side-footed past Taylor and doubled the Bannsiders’ lead.

Glenavon’s second-half task of trying to get back into the game with 10 men was always going to be incredibly difficult. Mitchell almost broke through on goal in the 58th minute, but Aaron Canning made an important interception to deny him.

On 62 minutes Coleraine midfielder Aaron Jarvis saw his piledriver of an effort cannon of the crossbar.

McLaughlin completed his hat-trick and ended any slim hopes of a Glenavon fight-back a minute later. Jamie Glackin broke through from midfield and slipped a pass into the box for McLaughlin. The striker squeezed a shot past Taylor with his left foot to make it 3-0 to the home side.

Coleraine substitute Nedas Macuilaitis was upended in the box by Glenavon substitute Eoin Wearen in the 77th minute and referee Hunter pointed to the spot. Doherty sent Taylor the wrong way to complete the scoring, drilling his penalty inside the keeper’s left-hand post as he dived to his right, and make the final score 4-0 to Oran Kearney’s league leaders.

Glenavon were scheduled to travel to the Oval to take on Glentoran next Saturday (16th November), but this game has been postponed due to Northern Ireland Under-21s international call-ups.