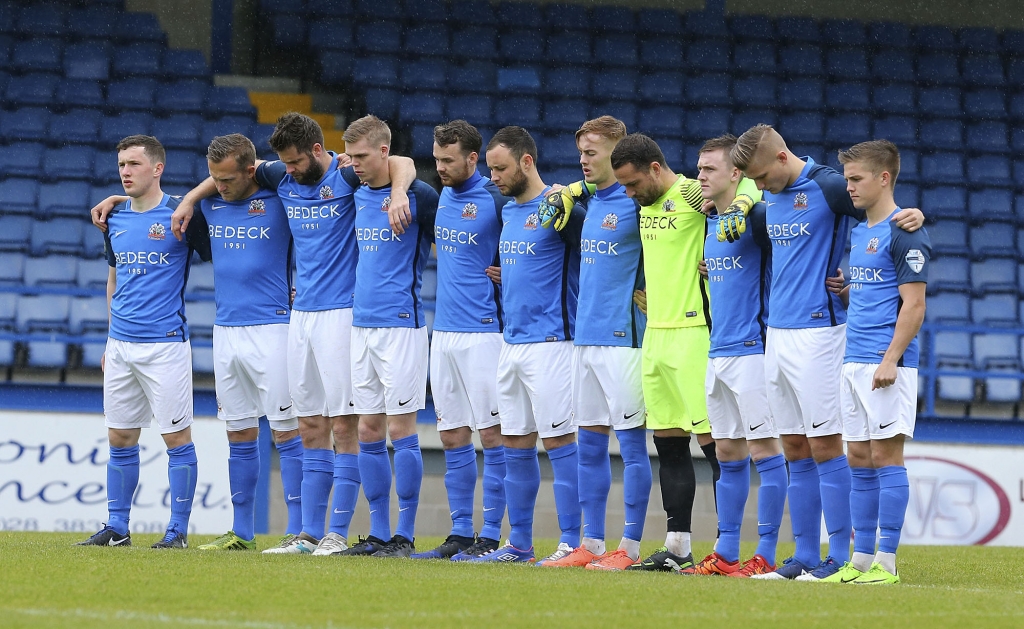 A minute’s silence for life-long Glenavon fans Bram Pearson, Cecil Bell and Jerome McAreavey who all sadly passed away in the past few weeks, was impeccably observed before kick-off. Photo by Alan Weir

Glenavon ran out comfortable 3-1 winners over Cliftonville in a feisty encounter at Mourneview Park on Saturday (September 16th).

In a game in which referee Arnold Hunter produced eight yellow cards and one red, Glenavon took the lead early on through the in-form Andrew Mitchell. 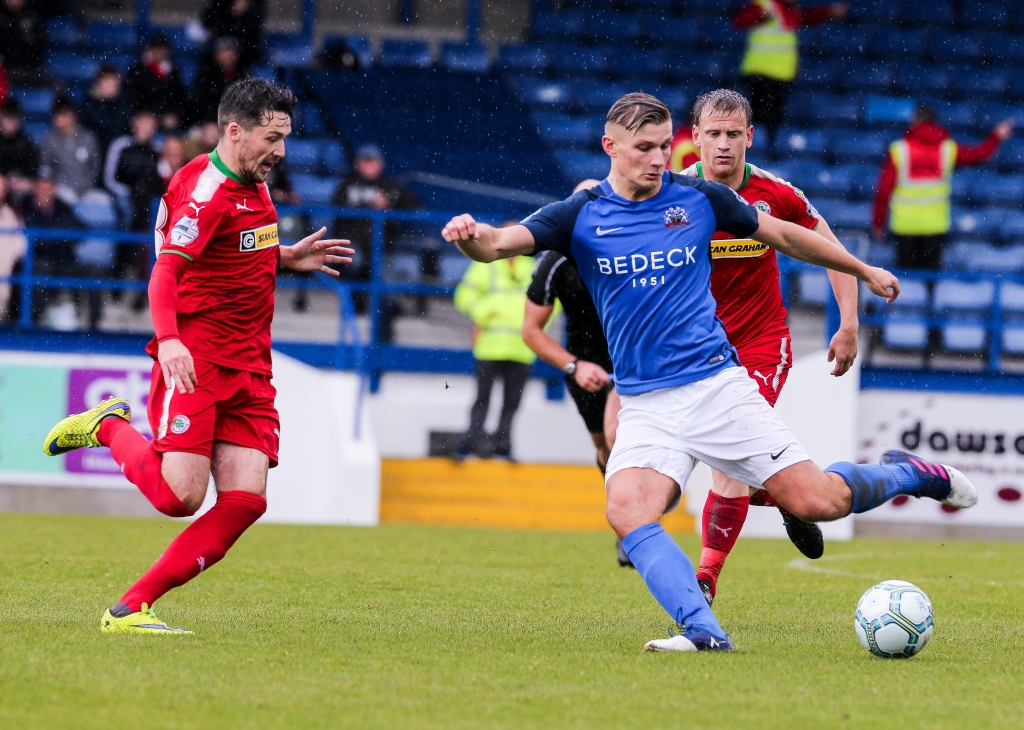 Man of the match Andrew Hall scored the Lurgan Blues’ second goal in the opening minutes of the second half, then substitute Marc Griffin added a third on 75 minutes.

Joe Gormley’s strike for the visitors in the 80th minute was little more than a consolation goal, and Reds defender Garry Breen was dismissed late on for a second bookable offence.

The game started at a frantic pace, and it was no surprise that it didn’t take long for the deadlock to be broken. Rhys Marshall played the ball out to Hall on the right flank. The winger needed a bit of luck to get past full-back Aaron Donnelly, before driving a low cross into the box which found Mitchell. The striker’s first touch with his left foot took him between Cliftonville defenders Breen and Jaime McGovern, creating the space for him to fire an excellent shot with his right foot beyond goalkeeper Brett Long and into the far corner for his seventh goal in seven league games this season. 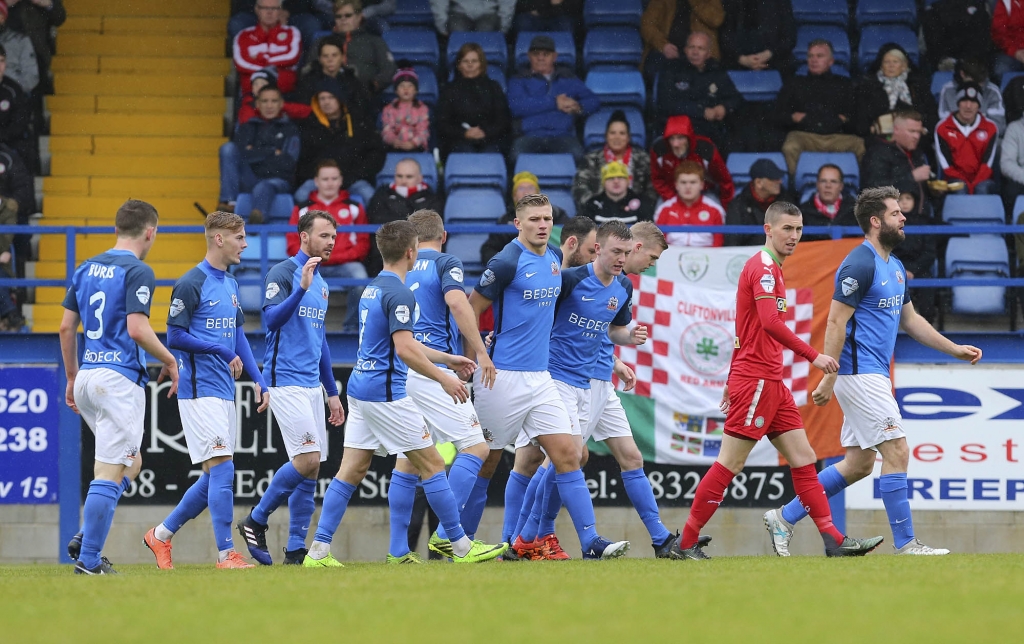 Cliftonville almost equalised in the 18th minute. Aaron Donnelly picked out Rory Donnelly with a corner kick. The former Swansea City man’s header was going wide, but it came off Glenavon defender Andrew Doyle and forced Jonathan Tuffey in to making a point-blank save with his left leg.

The visitors arguably had the better of the play for the remainder of the first half. They had a penalty appeal for handball turned down on 20 minutes, then on the half-hour mark Daniel Hughes fizzed a ball across the box but Gormley couldn’t get on the end of it. 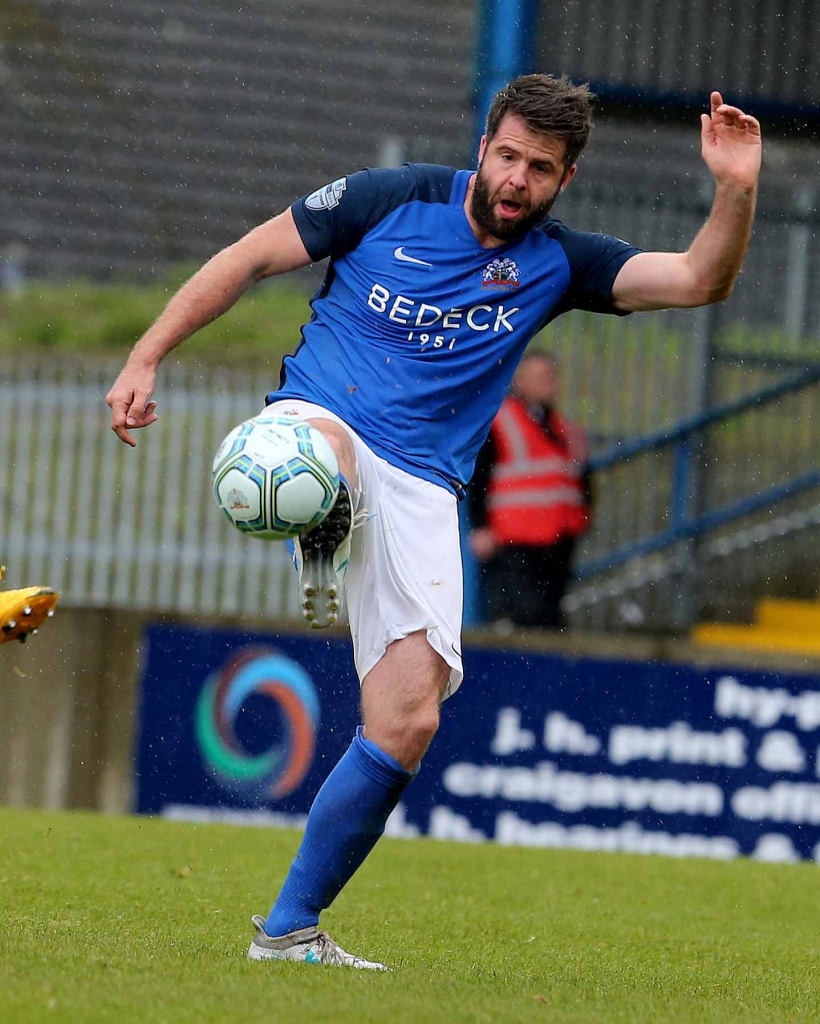 However, Glenavon almost added to their lead in the 40th minute. Mark Sykes played a ball down the line for Bobby Burns and his cross agonisingly evaded strike partner Mitchell.

The first half ended in hot-tempered fashion when Liam Bagnall’s off-the-ball shove on Sykes sparked a melee close to the centre circle. When referee Hunter managed to calm things down, he flashed yellow cards at Cliftonville’s Bagnall and Breen, and somewhat inexplicably at Glenavon’s Sammy Clingan as well.

Glenavon doubled their lead just six minutes into the second half. James Singleton’s throw in found Burns close to the corner flag and he hooked a high cross into the penalty area. Hall rose and hung in the air, before directing a brilliant header into Long’s bottom corner. 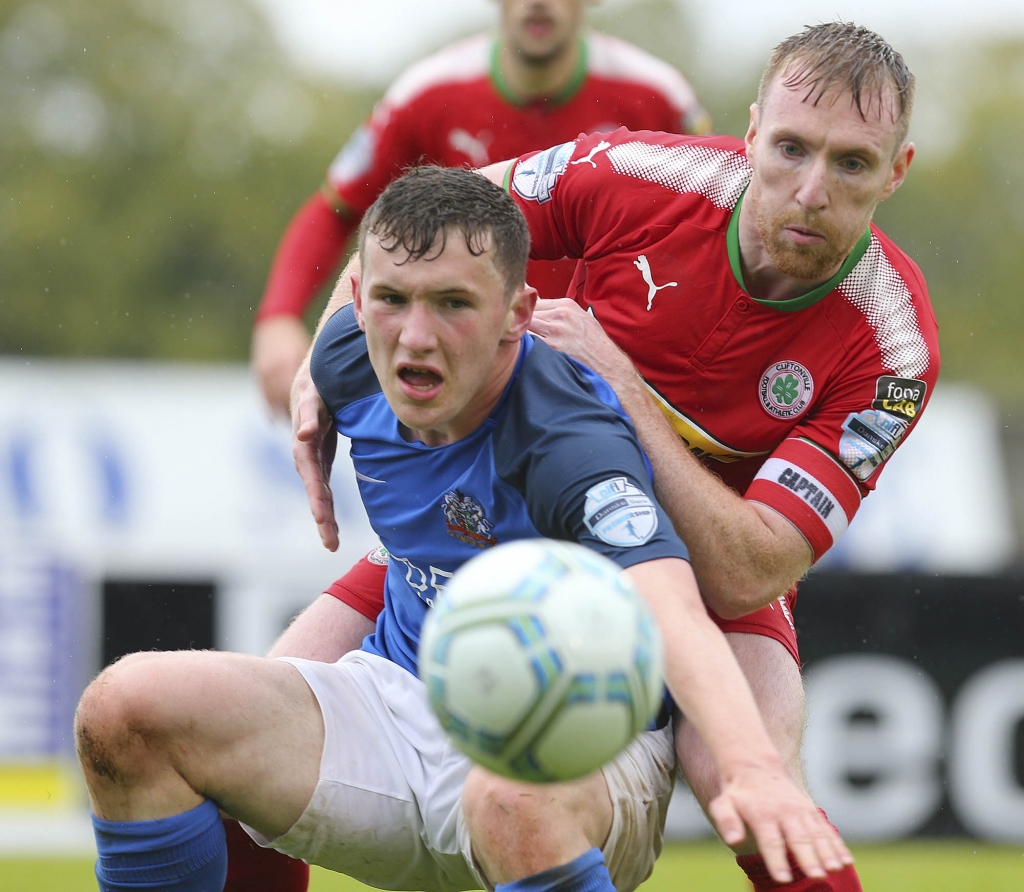 Marc Griffin replaced Burns in the 55th minute, and he almost had an immediate impact on the game. Rory Donnelly’s wayward pass found Josh Daniels, who drove into the box. His pull-back went behind Mitchell but fell for Griffin. The striker swivelled and got a shot away, but it was straight at Long.

Griffin was not to be denied 20 minutes later. Good build-up play on the right involving Clingan, Sykes and Marshall resulted in the ball being laid off for Hall to whip in a low cross, and Griffin was on hand to divert the ball past Long from the edge of the six-yard box. 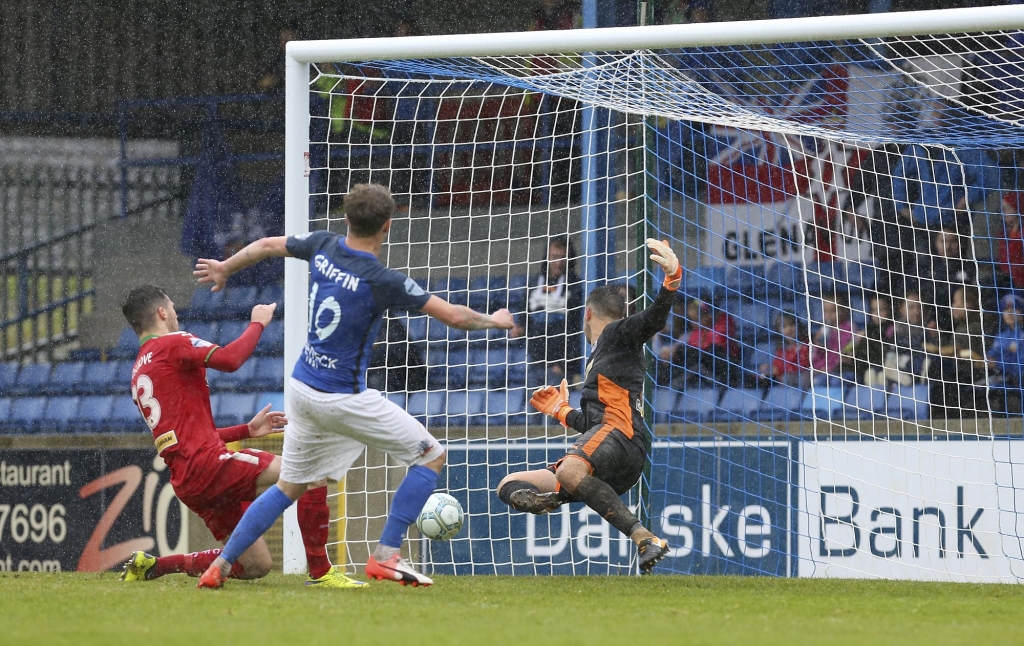 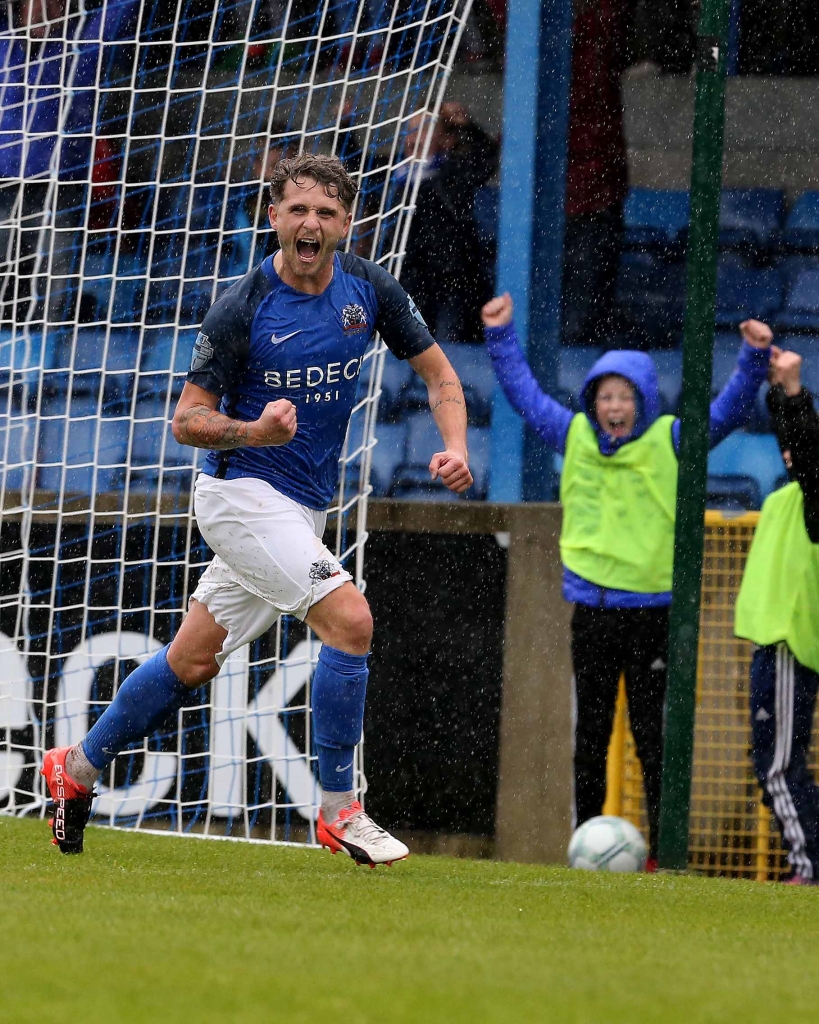 Marc Griffin celebrates his goal after making it 3-0. Photo by Maynard Collins

Gormley grabbed a consolation goal for the visitors 10 minutes from time. Clingan and Sykes got in each other’s way, allowing a hooked clearance from Breen to find Jay Donnelly. His through ball sent Gormley clear, Glenavon appeals for offside were ignored and the striker coolly rounded Tuffey and rolled the ball into the empty net to grab his fourth of the season.

Any hopes of a dramatic late comeback from the Reds were quashed when Breen was given his marching orders in the 86th minute. He lunged in recklessly at Hall and Hunter had no choice but to show the ex-Portadown player his second yellow card. 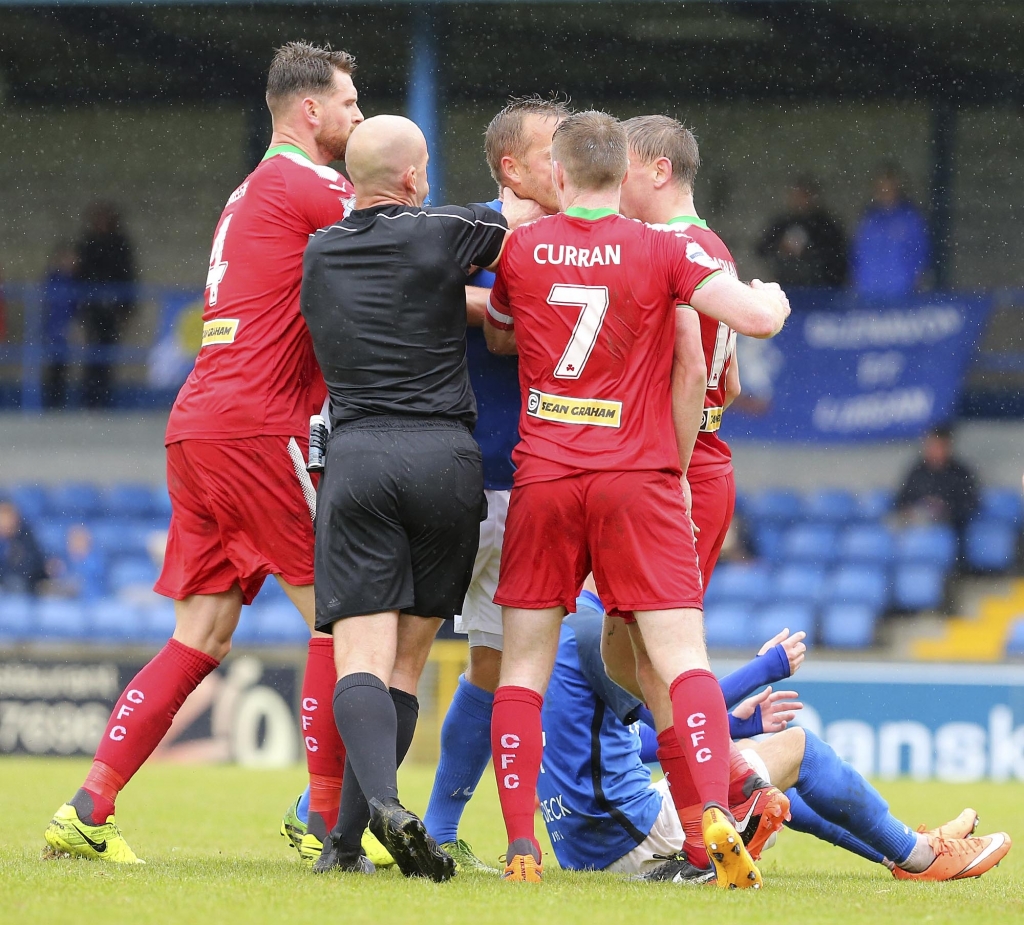 With 24 goals so far, Glenavon have scored more times than any other side in this season’s Danske Bank Premiership, and they will be confident of adding to their haul next Saturday (September 23rd) when they welcome 10th-placed Ards to Mourneview Park. However, the Lurgan Blues will be aware that victory won’t be easy to come by against Ards, considering Colin Nixon’s side held Crusaders to a 0-0 draw at Seaview in their previous game.