Glenavon earned an impressive 4-2 victory over fourth-placed Crusaders in an entertaining game at Mourneview Park on Tuesday night.

It wasn’t until late in the first half that the game really sparked into life, with Peter Campbell giving the Lurgan Blues the lead when his low shot found the bottom corner from 20 yards in the 36th minute.

Campbell turned provider three minutes later when he crossed for Matthew Fitzpatrick to head home, securing a two-goal advantage for the home side going into the break.

Philip Lowry reduced the Crues’ arrears three minutes into the second period when he converted from close range after Glenavon had failed to clear a Dean Ebbe cross.

Glenavon restored their two-goal advantage just two minutes after Lowry’s strike when sponsors’ Man of the Match Campbell grabbed his second of the game.

On 70 minutes, the visitors found themselves right back in the game again when captain Billy Joe Burns scored with a screamer of a volley after having cleverly flicked the ball over Campbell.

Any hope of a Crues comeback was snuffed out three minutes from time when defender Jarlath O’Rourke comically headed the ball over Jonny Tuffey and into his own net when attempting to play it back to his goalkeeper.

The first notable effort of the game came from Crusaders’ Jordan Forsythe on seven minutes. His left-foot shot looked to be heading for the target, only for Glenavon captain Danny Wallace to get a block in.

The same two players were involved again 10 minutes later. This time Forsythe sent in a threatening cross from the right and Wallace did well to head clear.

There was a big let-off for Glenavon in the 19th minute when Ebbe broke through to face Rory Brown one-on-one. Fortunately for the Lurgan Blues, the attacker steered his low shot wide of the far post.

Glenavon started to come into the game more as the first half wore on, and Conor McCloskey delivered a superb cross from the right flank with the outside of his right foot on the half-hour mark, but the Crusaders defence managed to clear.

Two minutes after that incident, McCloskey had a great opportunity to slip Fitzpatrick in on goal, only to overhit his pass.

Glenavon got their noses in front on 36 minutes. Wallace launched a long ball forward and Fitzpatrick managed to win his battle with Josh Robinson before laying it back to Campbell. The winger brought the ball under control and shifted it to his left, then arrowed a low shot into the bottom corner, leaving Tuffey rooted to the spot in the Crusaders goal.

It was a case of role reversal for Campbell and Fitzpatrick three minutes later. This time Campbell curled over an inswinging cross from the right and Fitzpatrick got there ahead of Tuffey to nod the ball past the helpless former Glenavon keeper and into the net, giving the Lurgan Blues a two-goal cushion to take into the half-time break.

Crusaders reduced their deficit to a single goal just three minutes after the restart. Substitute Johnny McMurray’s pass deflected off Andrew Doyle and into the path of Ebbe. Brown rushed off his line to narrow the angle, then spread himself to make an impressive save. Unfortunately for the Glenavon goalkeeper, the ball popped up into the air and fell to Ebbe, who volleyed a first-time cross back into the six-yard box. Wallace mishit his attempted clearance, and that allowed Lowry to prod the ball home from virtually on the goal line.

Just two minutes later, however, Glenavon found themselves back to being two goals to the good. Aaron Prendergast advanced on the right before squaring the ball for Campbell, who found himself in acres of space inside the Crusaders penalty area. Campbell set himself with his first touch, then coolly slotted the ball past the onrushing Tuffey and inside the left-hand post to grab his second of the game.

Prendergast might have added to the home side’s advantage when Campbell put him through on the right on 59 minutes, but the young striker was forced wide, and his shot was eventually deflected behind for a corner.

Campbell then forced Tuffey into action in the 68th minute when he drilled in a low shot from a narrow angle. The goalkeeper was equal to the effort, and the Crues then cleared the loose ball.

The visitors hauled themselves back to within a single goal of Glenavon once again on 70 minutes by way of a strike of pure quality from captain Burns. A Forsythe throw-in from the right was headed on by Ross Clarke. Wallace headed the ball towards the edge of his penalty area, where Campbell then attempted to send it further upfield. The winger got his connection all wrong, though, allowing Burns to latch onto the ball. He cutely flicked it over Campbell with his first touch, then hit an exquisite volley with his second which Brown could only watch fly into the far corner.

Having just added to his impressive collection of screamers at one end, Burns displayed his defensive skills at the other four minutes later when he did brilliantly to clear a dangerous Fitzpatrick cross from the right.

The Crues fleetingly thought they had equalised when Clarke turned a Robinson shot into the net from close range in the 79th minute, but the attacker was clearly offside when he struck the ball, and the linesman raised his flag almost immediately to rule the effort out.

The result was sealed on 87 minutes when Glenavon got their fourth goal under very fortuitous circumstances. Substitute Eoin Bradley looked to be offside when the ball was clipped into his path by Prendergast down the left, only for the linesman’s flag to remain by his side. Things got even more fortunate for the Lurgan Blues when Bradley scooped over a cross and the unfortunate O’Rourke turned the ball into his own goal. The full-back attempted to head back to Tuffey, but instead he only succeeded in looping the ball over his goalkeeper and into the net, leaving the final score Glenavon 4-2 Crusaders.

This victory sees Glenavon move level on points with Ballymena United, with both sides having accumulated 26 after having played 20 matches apiece. The Lurgan Blues sit one place above the Sky Blues in the league table, in seventh place, by virtue of their superior goal difference. 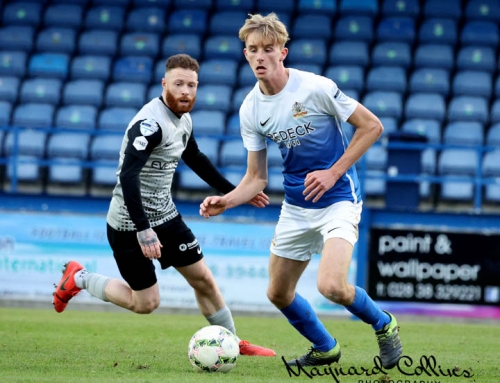