Glenavon secured a third successive win on Saturday afternoon with a 1-0 victory over Coleraine at Mourneview Park.

For the second weekend in a row the Lurgan Blues struck a late winner, with Matthew Snoddy drilling home a superb shot to secure the three points on 82 minutes.

The game started at a high intensity and there was action at both ends of the pitch in the opening minutes, with Calum Birney doing well to cut out a Conor McKendry cross into the Glenavon box in the sixth minute.

Peter Campbell forced Gareth Deane into a save at the other end a minute later when he curled a shot towards the top corner, while Deane’s opposite number James Taylor had to save from Jamie Glackin moments after that.

Matthew Fitzpatrick skinned Josh Carson down the Coleraine left on 23 minutes before picking Andy Waterworth out with a low cross. The striker turned and got a shot off, but he couldn’t hit the target with his left foot.

Fitzpatrick was again the creator two minutes later when he teed up Snoddy for a shot, but it was deflected behind for a corner.

Taylor made a smart save in the 37th minute when he dived down to his right to keep out a McKendry shot.

The best opportunity of the first half was presented to Coleraine’s Rodney Brown when he was picked out with a cross on 38 minutes, but the defender couldn’t hit the target with his header.

Shevlin then sent a low shot narrowly wide of the far post a minute later as the Bannsiders finished the first half the stronger of the two sides.

The second half started in much the same fashion as the first, and there was a massive let-off for Glenavon two minutes after the restart when Campbell’s back-pass sent Eoin Bradley through on goal. The former Glenavon striker hesitated when he really should have taken a shot. Instead, Bradley held the ball up and laid it off for McKendry, only for his shot to go well over the bar.

A minute later Bradley went down under a challenge from Danny Wallace when he looked to get through on goal again, but referee Andrew Davey allowed play to continue, much to the bemusement of the travelling supporters.

Fitzpatrick stung the fingertips of Deane with his shot from the right corner of the penalty area on 50 minutes as both sides continued their search for the opening goal.

Birney went close with a header in the 58th minute after Sean Ward had picked him out from a corner-kick, but the ball dropped just over the crossbar.

Campbell’s effort with his weaker right foot wasn’t too far away either on 64 minutes, while Coleraine somehow failed to score three minutes later when there was a massive goalmouth scramble in the Glenavon penalty area.

Taylor made another good save in what was a solid performance when he dived to his left to claw away Glackin’s curling effort in the 76th minute.

As the game entered the closing stages it looked like one goal would settle it, and that proved to be the case. Incisive passing in the middle of the pitch, with substitute Andy Hall feeding the ball forward to Fitzpatrick, who in turn played it out to the right for Snoddy, opened up the Coleraine defence on 82 minutes. Snoddy carried the ball into the penalty area and set himself before arrowing a low shot beyond Deane and into the far corner to seal a third straight win for Gary Hamilton’s men.

That’s four wins in their last five games for Glenavon, and Hamilton will be particularly pleased by the fact that his team has also kept a clean sheet in each of those victories.

Next up is a stern test for the Lurgan Blues, however, as they travel to the Oval on Friday night (17th December) to take on a Glentoran team who know that a win would take them top of the table. Kick-off will be at 7.45pm.

Happy Birthday to Noel, a lifelong Glenavon supporter who celebrated his 87th Birthday on Saturday! 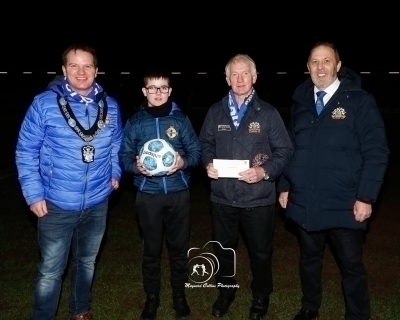 MAN OF THE MATCH SPONSORS – Richard Johnson and Ian Henderson 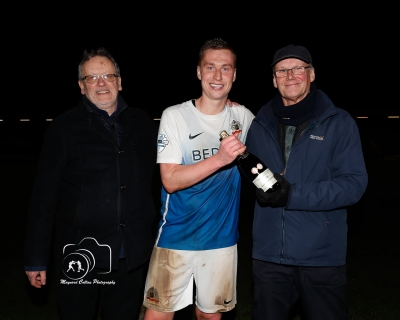