Glenavon secured a convincing 4-2 win over Dungannon Swifts in the Danske Bank Premiership at Mourneview Park on Saturday afternoon.

Mark Stafford headed the Lurgan Blues in front on 12 minutes when he converted from captain Michael O’Connor’s corner, only for the Swifts’ Ryan Mayse to level matters seven minutes later when his deflected shot came off Stafford to beat James Taylor in the Glenavon goal.

The Lurgan Blues restored their lead on 22 minutes when Matthew Fitzpatrick held off Aaron Canning to bury his shot in the bottom corner, and the home side carried their advantage into the half-time break.

Fitzpatrick scored his second and Glenavon’s third seven minutes into the second half when he got on the end of Stafford’s flicked header from Sean Ward’s throw-in to drive home, while the impressive Peter Campbell added to the Lurgan Blues’ advantage on 61 minutes when he rounded off an impressive team move to make it 4-1.

The visitors hit back in the 83rd minute when Darragh McBrien rounded Taylor and passed into an empty net, but it proved to be nothing more than a late consolation, as the Lurgan Blues ran out deserved 4-2 winners.

The home side broke the deadlock on 12 minutes when Stafford rose highest to meet O’Connor’s corner, with visiting goalkeeper Alex Moore misreading the flight of the ball to leave the former Linfield defender with the simple task of nodding home.

The Swifts equalised just seven minutes later. Captain Oisin Smyth fed the ball into the feet of Mayse on the edge of the Glenavon penalty area and he set himself before firing a shot goalward which took a touch off the outstretched boot of Stafford, wrong-footing Glenavon goalkeeper Taylor.

The visitors were only on level terms for a matter of moments, as the home side got their noses in front again three minutes later. Fitzpatrick took full advantage of a loose ball in the box, holding off Canning before drilling a low shot past Moore and into the bottom corner to restore the Mourneview men’s advantage.

Glenavon really should have doubled their lead on 39 minutes when an O’Connor corner led to a goalmouth scramble, but the hosts somehow couldn’t convert.

Canning might have reduced the visitors’ arrears in first-half stoppage time, but he headed wide from a corner.

Glenavon eventually did double their advantage in the 52nd minute. Stafford flicked on a long Ward throw-in from the right and Fitzpatrick controlled the ball on his chest before drilling it home with his right boot.

Campbell rounded off a superb Glenavon move on 61 minutes to notch the fourth goal. Danny Wallace brilliantly cut inside Ethan McGee before finding the feet of Josh Doyle, and the young striker held the ball up before teeing up Campbell, with the winger confidently stroking a low shot beyond the dive of Moore and into the net.

Dungannon threatened to make it a nervy finish when the lively McBrien rounded off a slick team move by striding past the onrushing Taylor and stroking the ball into an empty net, but Gary Hamilton’s men held on for an impressive victory.

The Lurgan Blues travel to Seaview next Saturday for a stern test against fifth-placed Crusaders. Kick-off is at 3pm. 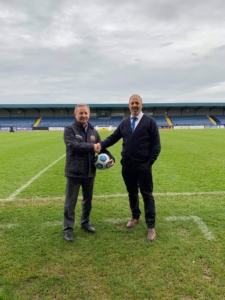 Ian Malcolmson was Saturday’s ball sponsor. He is thanked for his sponsorship by Philip Harrison. 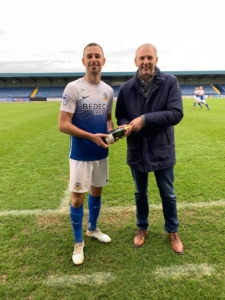