Glenavon lost 2-1 to Glentoran at Mourneview Park on Saturday afternoon.

Luke McCullough put the Glens in front on 16 minutes when he headed home after Glenavon goalkeeper Declan Brown had failed to hold a Hrvoje Plum free-kick.

Matthew Fitzpatrick’s header levelled for the Lurgan Blues in the 70th minute, but Glentoran restored their lead almost immediately, with Jay Donnelly converting from the penalty spot after Mark Haughey had fouled Plum, and that proved to be the winner.

Plum threated on five minutes when he sidestepped Calum Birney and had a go from 25 yards, but Haughey got the block in.

At the other end, Fitzpatrick squeezed a shot on target on the turn in the 13th minute, but Glentoran goalkeeper Aaron McCarey was able to save with his boot.

Glentoran grabbed the lead on 16 minutes. Plum took a free-kick from deep and the ball went all the way through to Brown. The Glenavon stopper failed to hold it and the rebound fell to McCullough, who was left with the simple task of nodding the ball home.

The Glens had strong penalty appeals waved away by referee Ross Dunlop in the 22nd minute when Daniel Wallace made a challenge on Conor McMenamin just as the forward was preparing to shoot.

Glenavon came close to an equaliser five minutes later when Bobby Burns headed off the line following a Glenavon corner.

It was Glenavon’s turn to clear off the line in the 31st minute, with Matthew Snoddy on hand to prevent Gael Bigirimana’s low shot going in after Brown had punched clear a Plum free-kick.

Brown was called into action again seven minutes after the break when he had to dive down to save a McMenamin shot.

Donnelly produced a superb bit of skill to fashion a shooting chance for himself two minutes later, but he couldn’t hit the target with his effort.

Rhys Marshall burst clear on the right in the 59th minute and cut the ball back to find McMenamin. Sean Ward did well to get a block in to smother McMenamin’s shot.

At the other end moments later, Andy Hall almost slipped Andy Waterworth in on goal, but Glens captain Paddy McLean made a timely interception to snuff out the danger.

Michael O’Connor picked out Birney from a corner on 67 minutes, but the former Glentoran defender couldn’t keep his header down.

Glenavon drew level in the 70th minute. Matthew Snoddy’s first cross was blocked by Caolan Marron, but his second was inch-perfect, picking out Fitzpatrick, who headed into the corner to make it one apiece.

The Lurgan Blues weren’t to be level for long, however, as Glentoran were awarded a penalty almost immediately after the restart. Plum got on the end of Donnelly’s flicked header, bursting into the box and past Haughey. The Glenavon defender stuck a leg out and tripped the Glens midfielder. Referee Dunlop had no choice but to point to the spot. Donnelly stepped up to take the penalty. Brown went the right way and got a hand to the ball, but he couldn’t keep it out of the net.

Gary Hamilton’s men will be hoping to put an end to a poor run of form when they travel to the Showgrounds on Friday night to take on sixth-placed Coleraine. Kick-off is at 7.45pm. 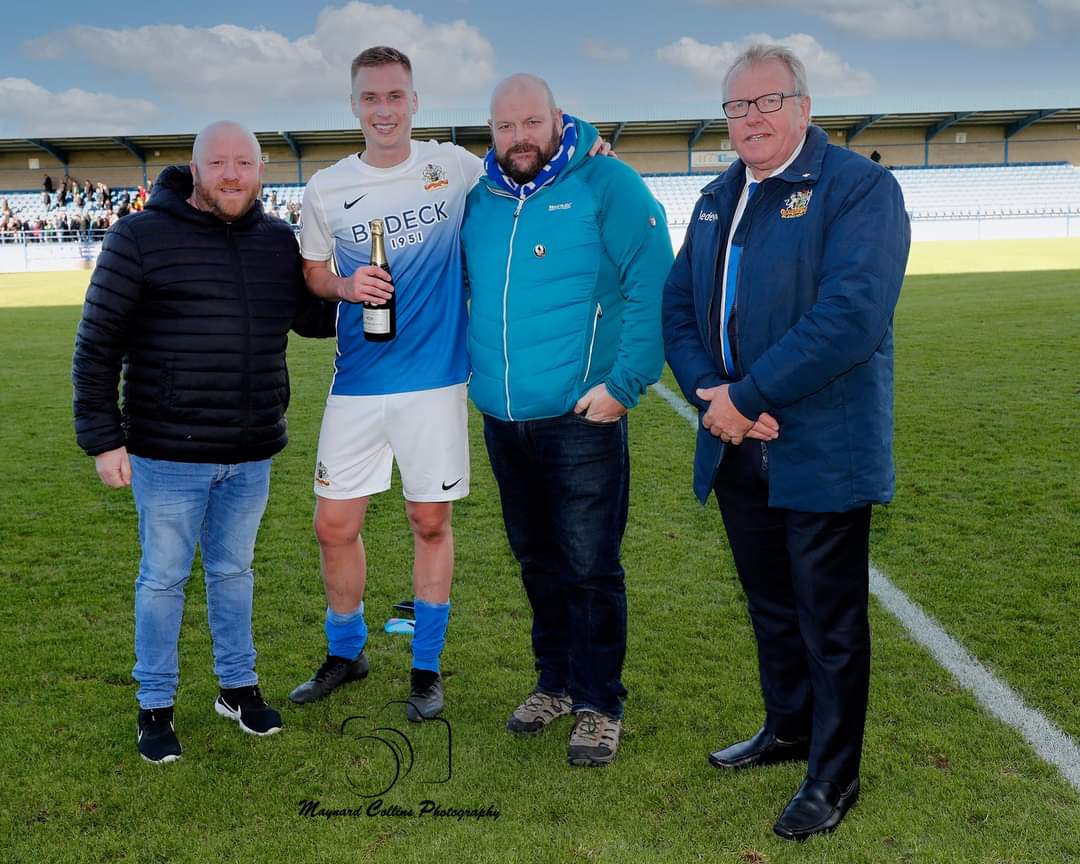 Calum Birney is presented with the Man of the Match award by sponsor Mark Baxter. 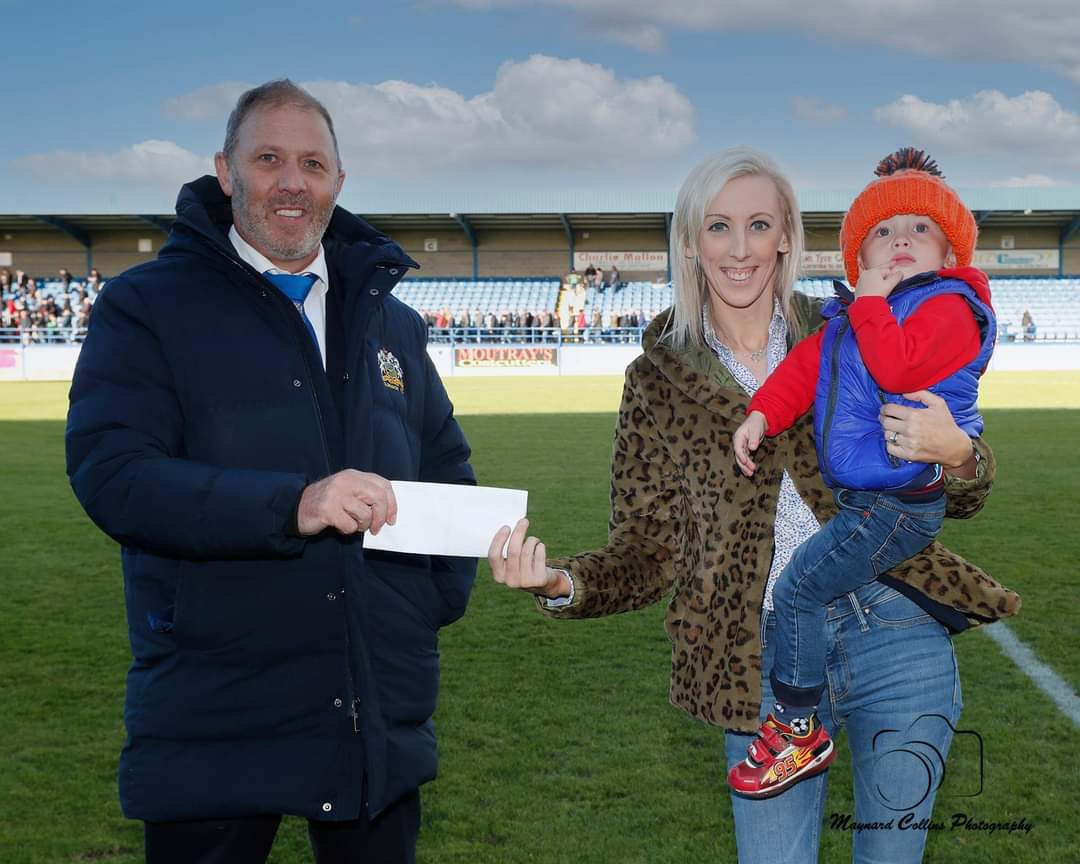 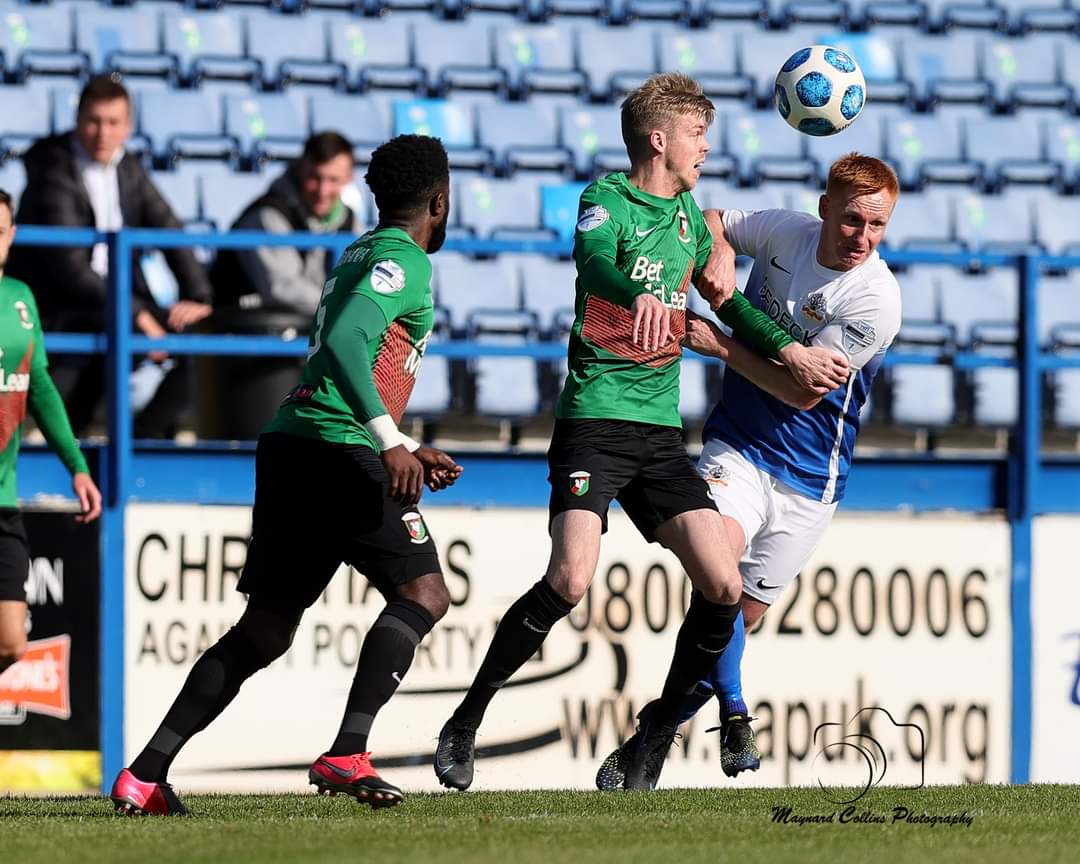 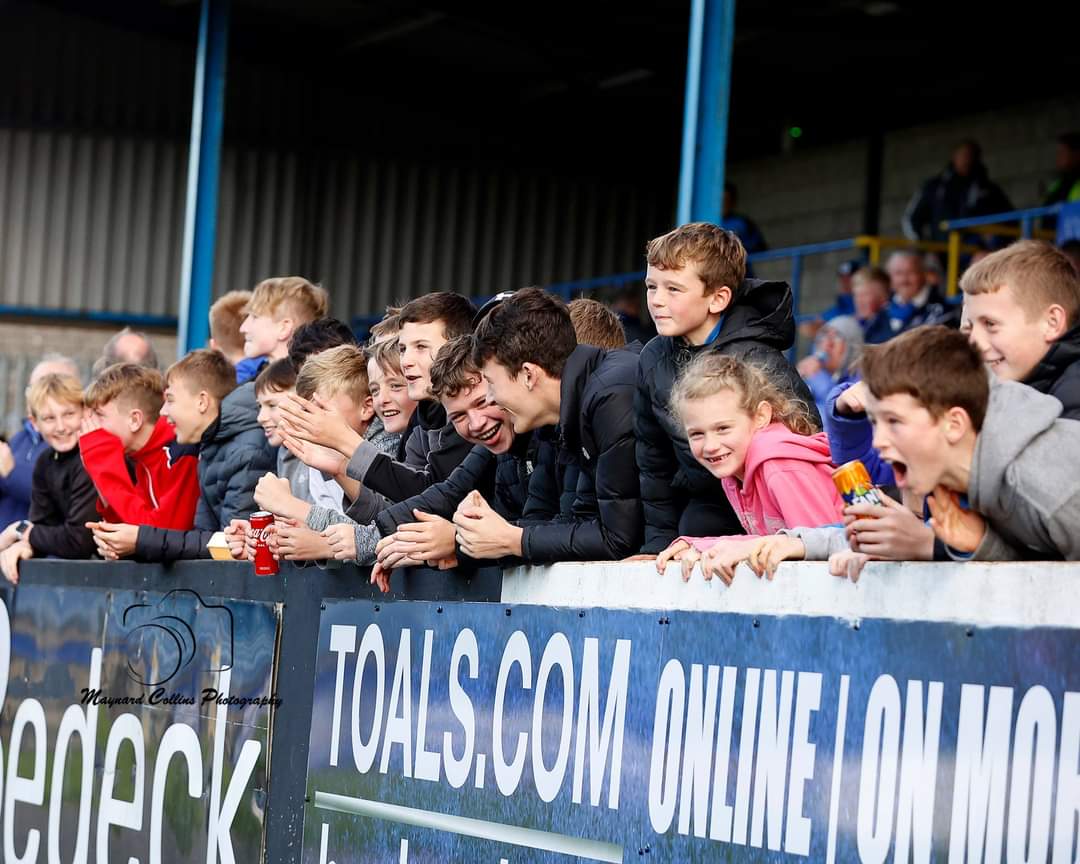 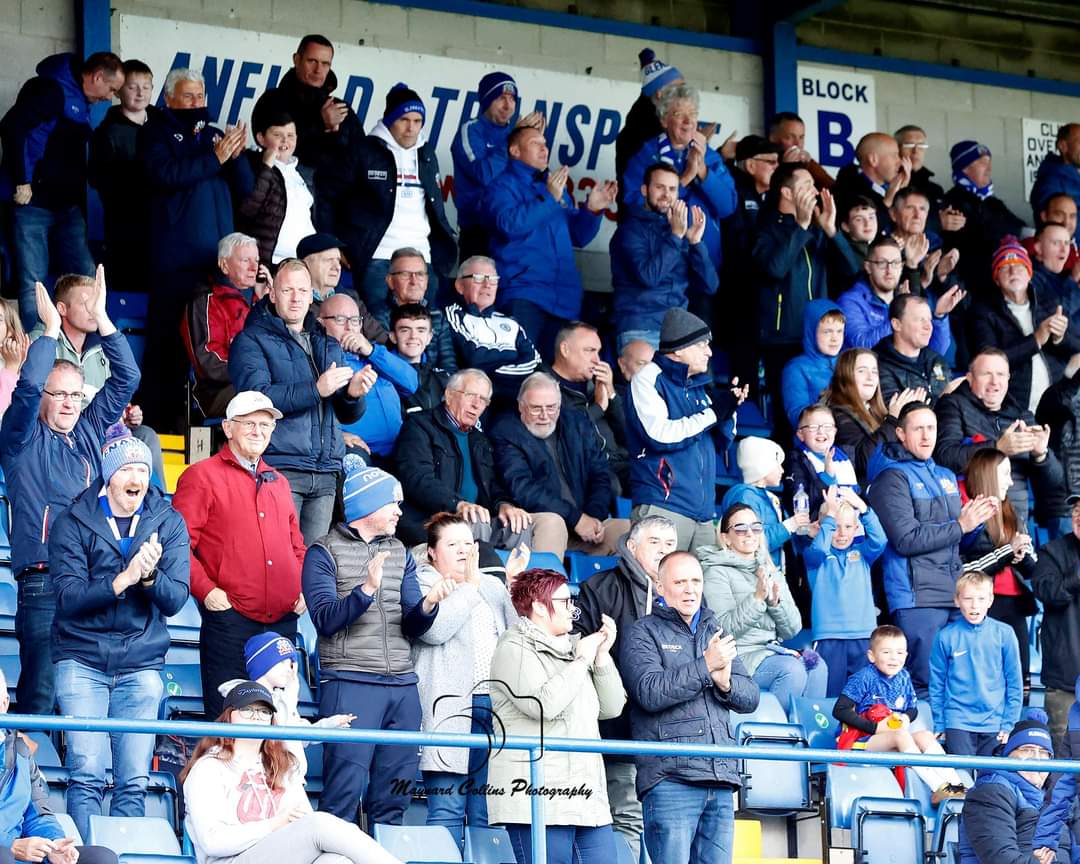 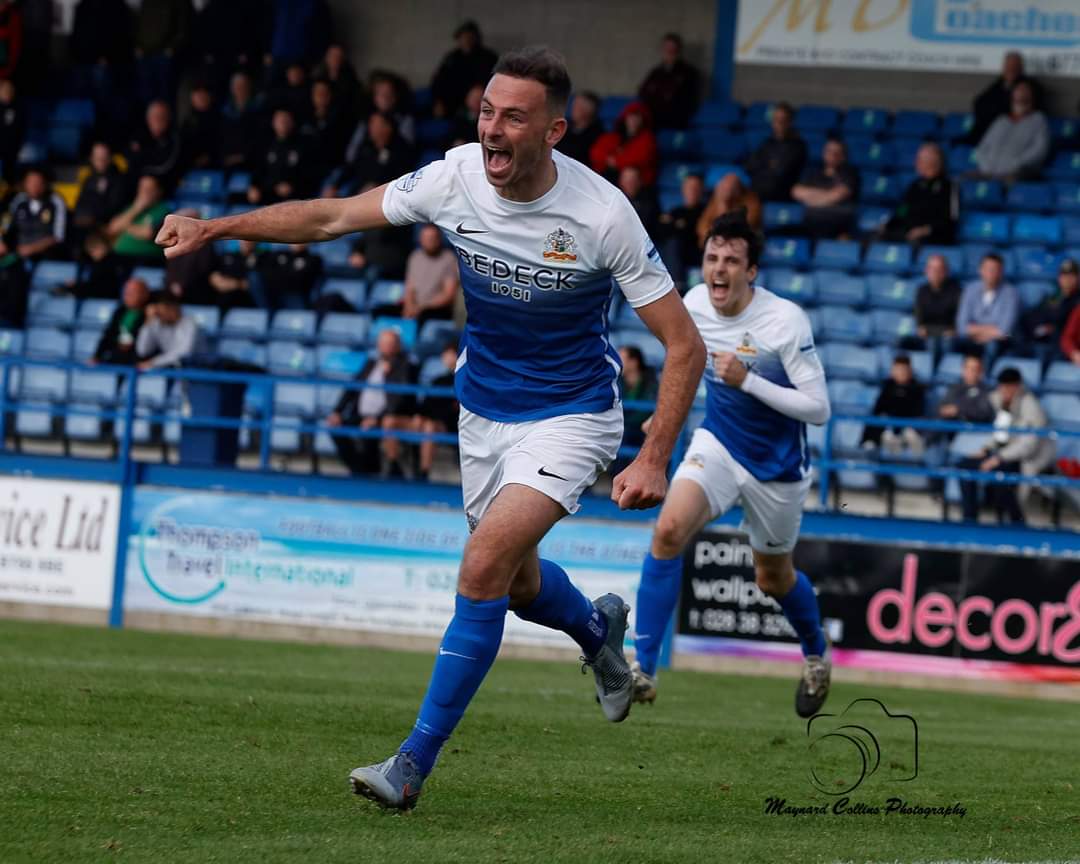 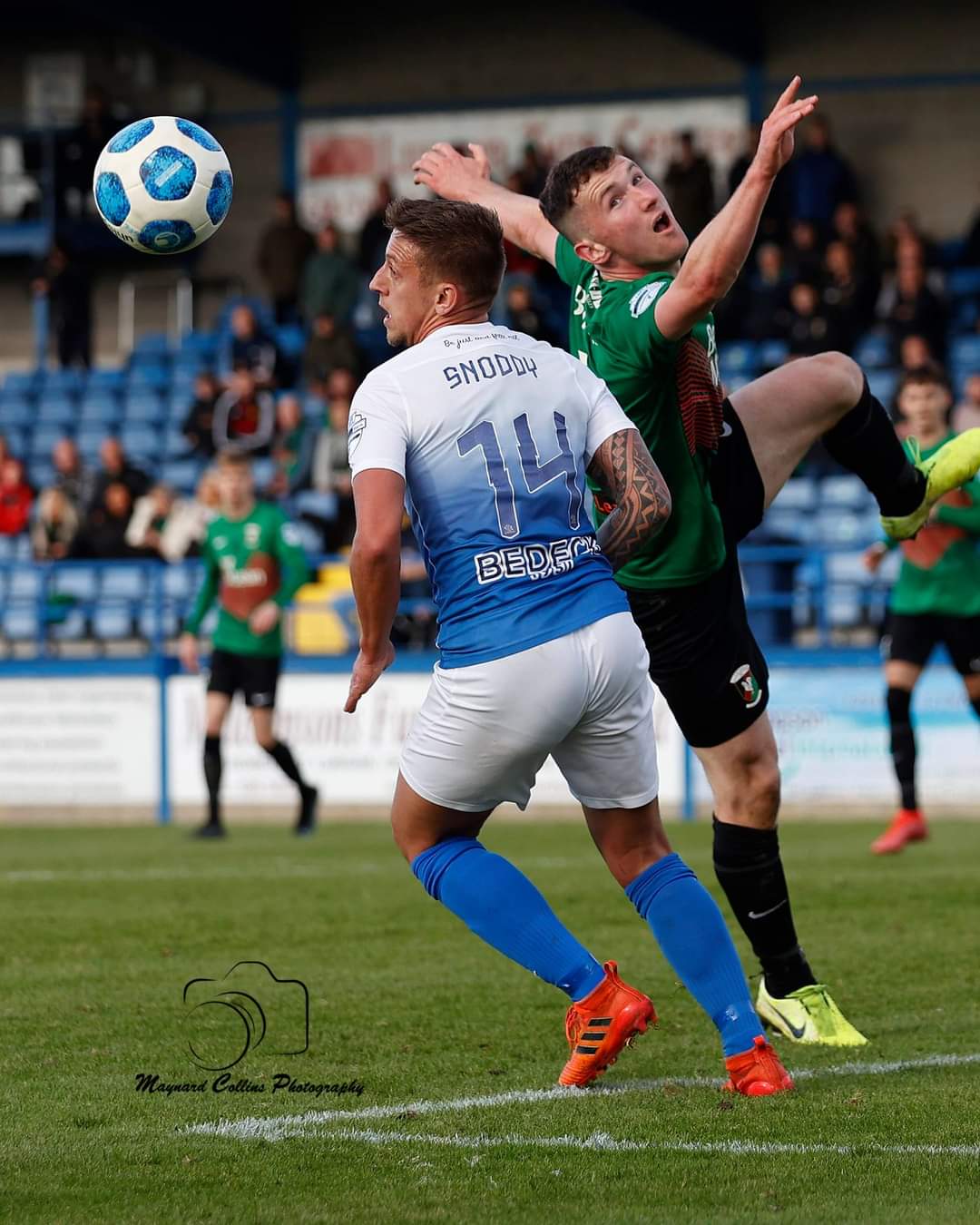 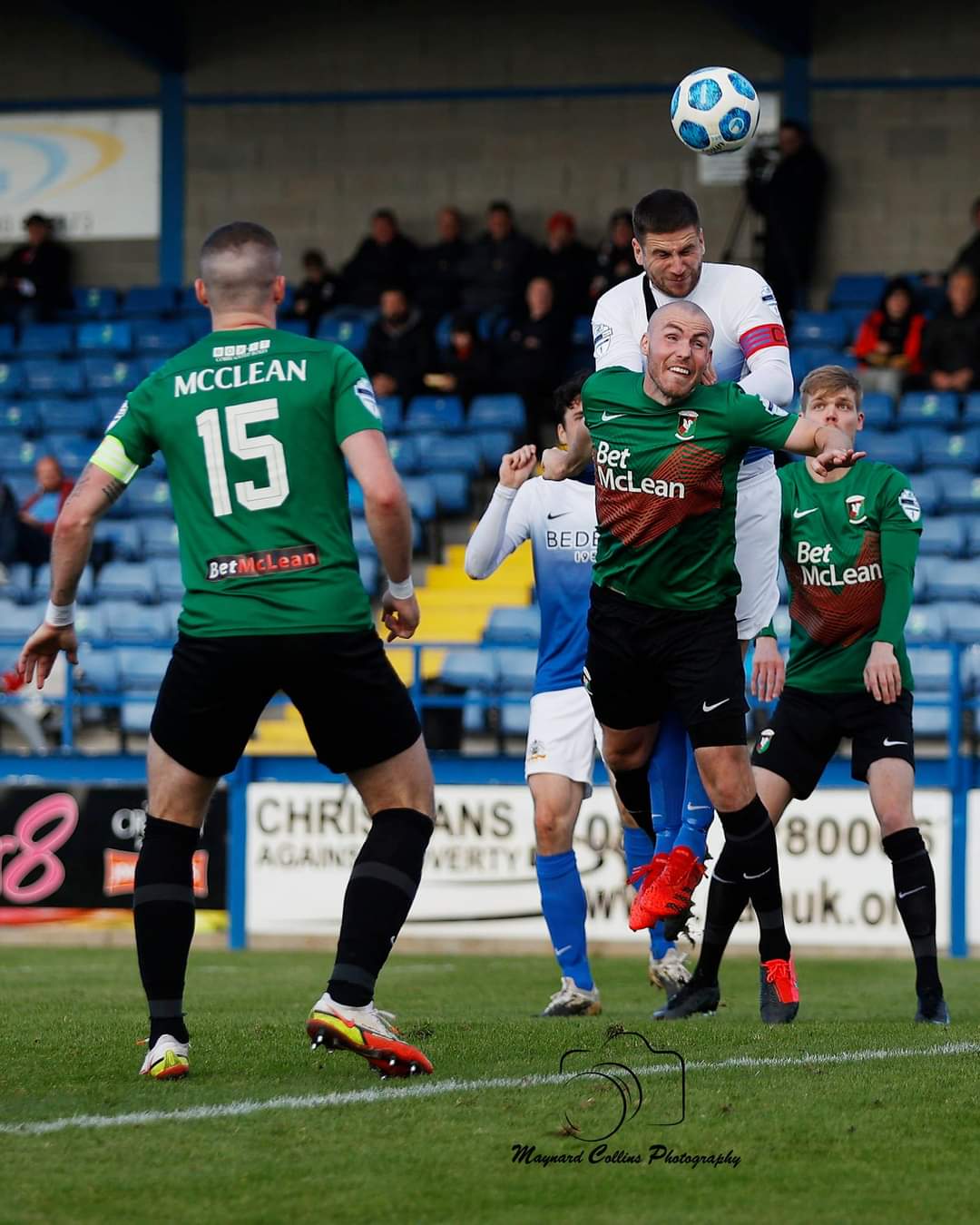