A last gasp goal by Marty Donnelly broke Glenavon’s hearts right at the end of the play-off semi-final at Inver Park.

For the majority of the game it was hard to tell which of the teams was the full-time outfit, and the Glenavon players certainly deserve praise for a fantastic effort on the night.

However, in the end, it wasn’t to be and it’s Larne who progress to Saturday’s game to decide who will fill the Premiership’s final European spot.

Glenavon took a fifth minute lead after a corner kick was headed back across goal. Calvin Douglas turned it back in the direction of Danny Purkis, who got the final touch to put the visitors in front.

However, their lead didn’t last long and with eight minutes on the clock it was 1-1. Again it came from a corner which was headed by John Herron. Andy Doyle cleared it off the line, but it was played back in by Hale and was turned in by Davy McDaid from close range.

There was a big let off when Craig Hyland was preparing to make a clearance – the problem being that he didn’t know that McDaid was lurking right behind him. He pounced but two tackles from the goalkeeper and Doyle, plus a block by Douglas later and the danger was eventually cleared. It was heart-in-mouth stuff.

Andy Hall had a glorious opportunity to put Glenavon in front on 19 minutes when he got on the end of a Doyle free kick, but he opted to roll the ball in front of goal in front of goal for someone else to turn in, when perhaps shooting might have been the better option.

Glenavon did have the ball in the net on 38 minutes when Andy Hall’s cross was punched into the goal by Conor Mitchell, but referee Lee Tavinder blew his whistle as the goalkeeper had been impeded.

The second half began with the Lurgan Blues keeping up their positive play. After good pressing Matthew Fitzpatrick picked up the ball and had a shot from the edge of the box, only to see it tipped over the bar by Mitchell on 51 minutes.

Fitzpatrick had another chance on 58 minutes when he drove forward and had another go from outside the box, but his shot was tame. He also had an option out to his right with Andy Hall coming in support to deliver a cross.

Larne felt they had a shout for a penalty on 61 minutes when McDaid went down under a challenge from Lee McNulty, but Tavinder adjudged there to have been no foul. Meanwhile, up the other end, a Sean Ward cross found Andy Hall but his header went over the crossbar.

With 12 minutes left to go Peter Campbell went desperately close to putting Glenavon ahead but his effort from 20 yards out narrowly floated past the post.

Albert Watson should have secured the win for Larne on 90 minutes when he turned a bullet of a header goalwards from a corner but there was mighty relief when it missed the target.

But Glenavon’s hearts were broken right at the death when Marty Donnelly charged into the box after good work from Conor McKendry, caught it well and hit the back of the net beyond Hyland. 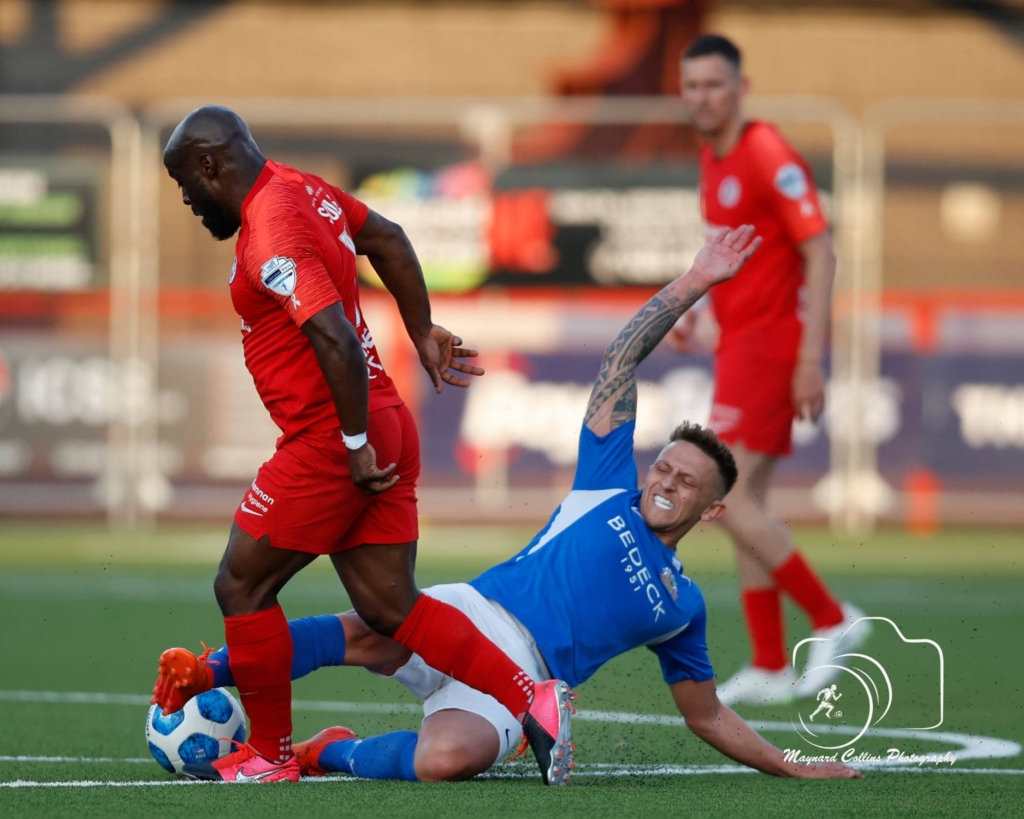 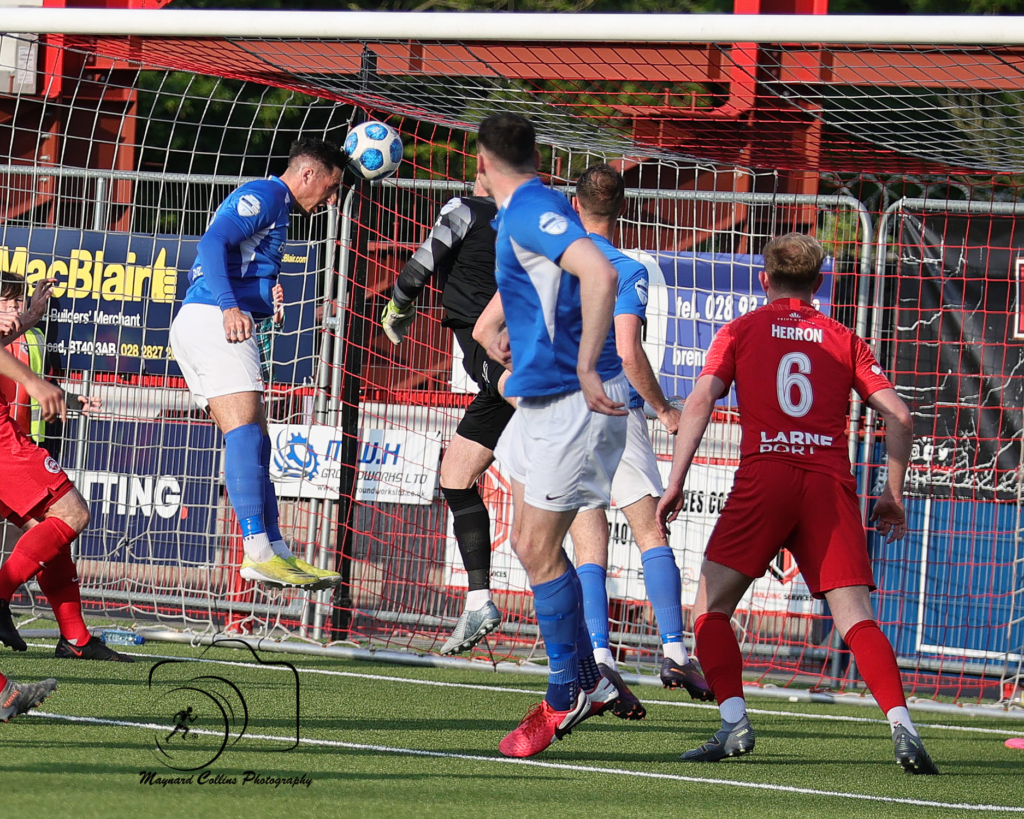 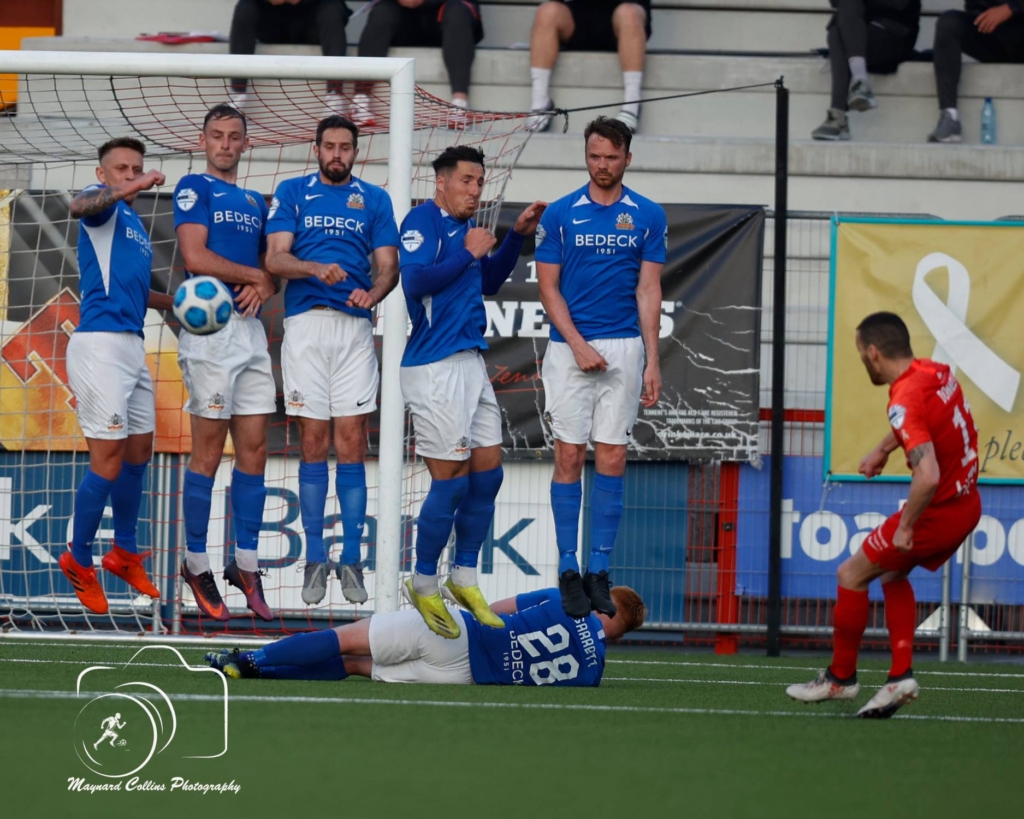 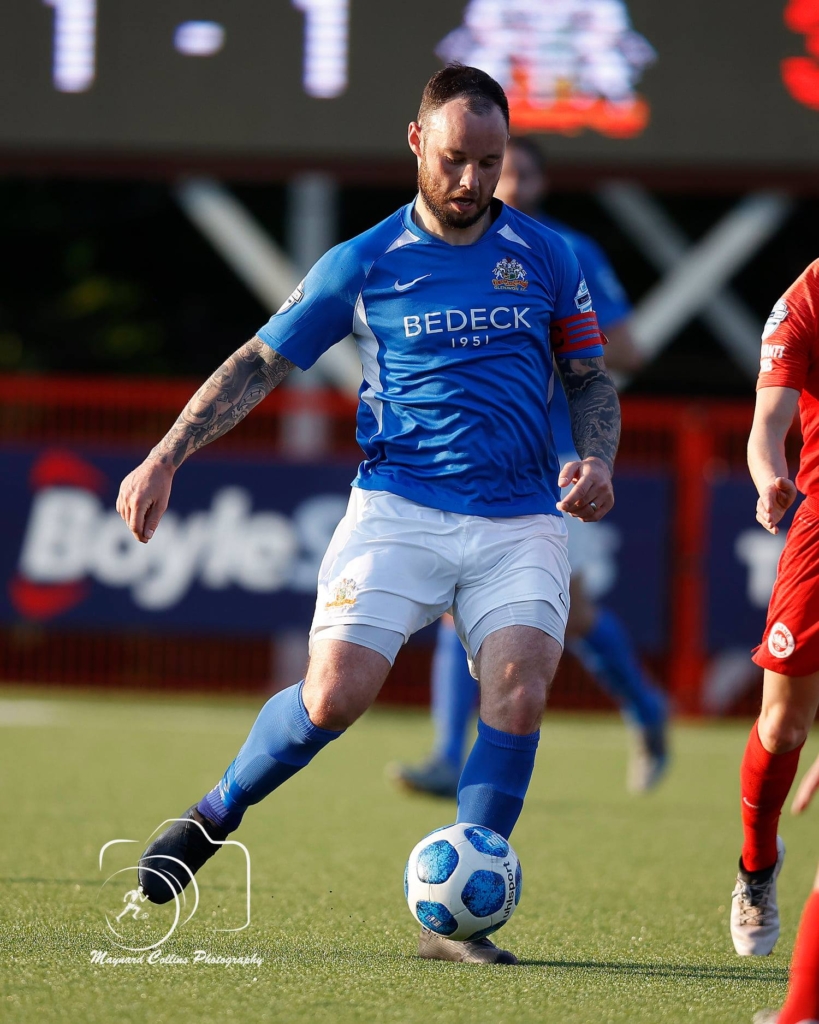 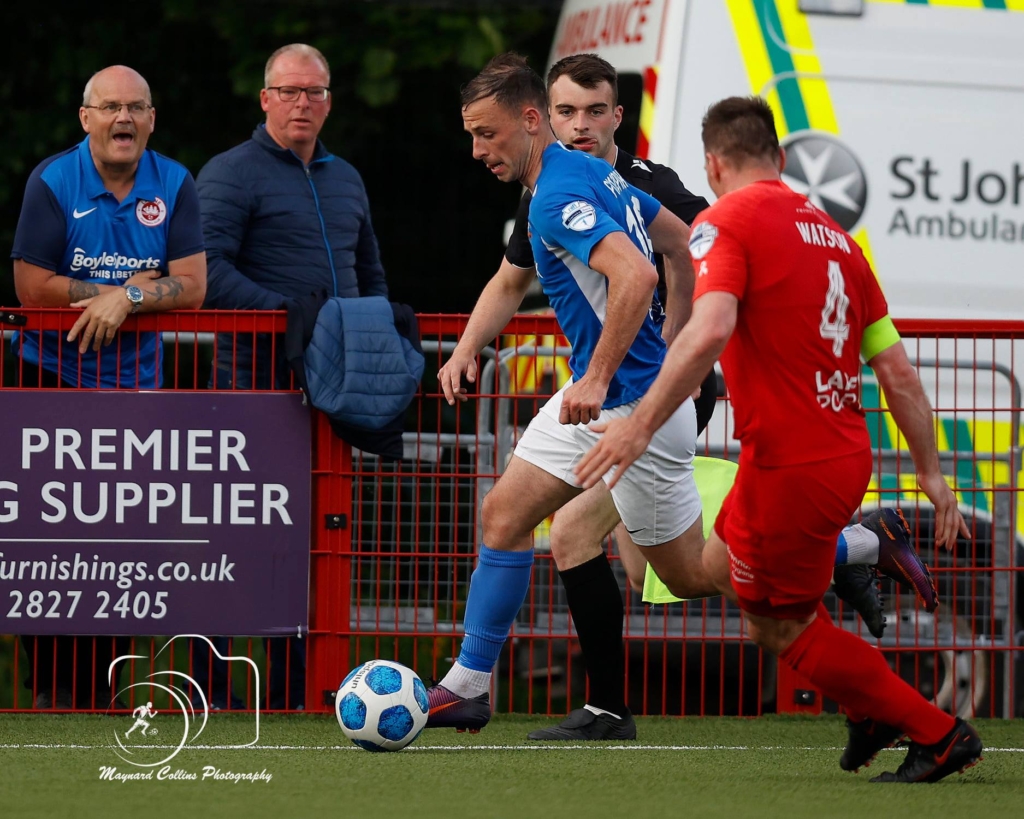 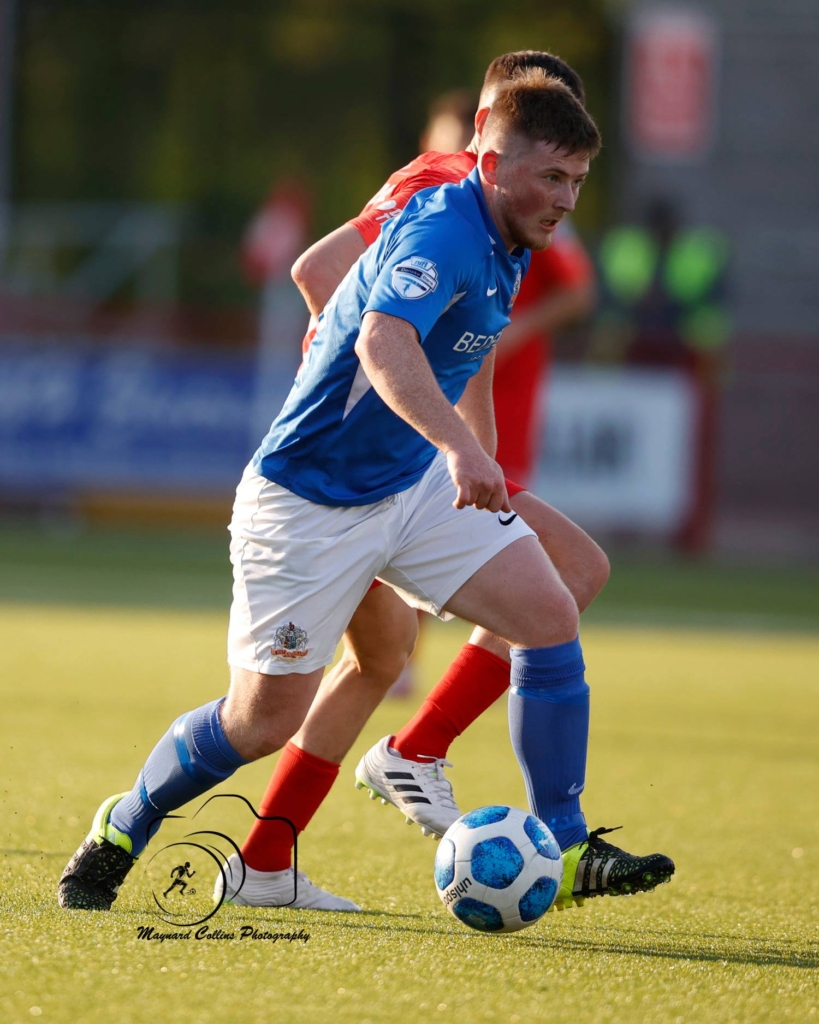 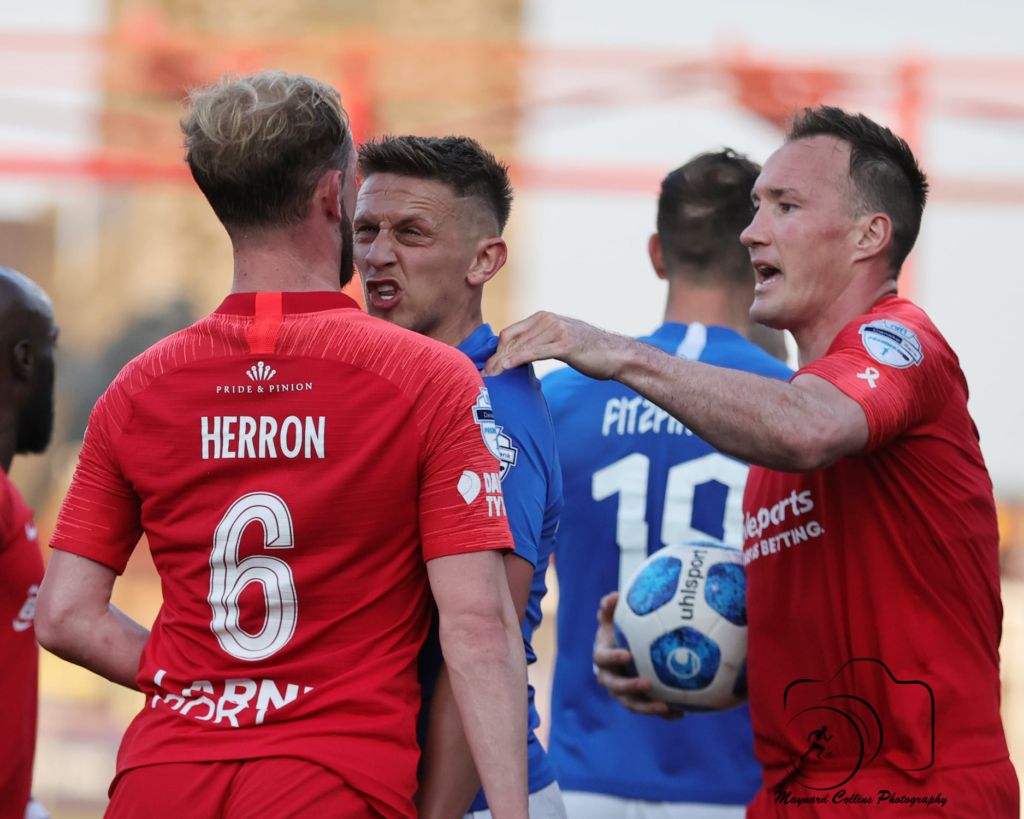