Skip to content
Previous Next
MATCH REPORT: Win is all Lin a day’s work for Glenavon

Colin Coates put Glenavon into an early lead before Shayne Lavery levelled on 13 minutes, but Matthew Fitzpatrick restored the Glenavon lead midway through the half.

After Purkis had doubled the home side’s advantage, Christy Manzinga gave Gary Hamilton’s men a sweat but in the end they held on for all three points.

Glenavon’s top six hopes had ended before the game even kicked off, following Crusaders’ victory over Dungannon Swifts.

However, with Ballymena United losing to Coleraine, there was still an opportunity to build a cushion over the Sky Blues in the battle for the final European playoff spot.

Glenavon made two changes from the team which defeated Warrenpoint on Tuesday night. Robbie Garrett and Andy Hall started in place of Calvin Douglas and Conan Byrne.

There was a chance for the visitors when Shayne Lavery headed over from Kirk Millar’s corner kick, but it was the hosts who would take the lead on nine minutes.

Peter Campbell swung in a free kick from the right of the Linfield half. Colin Coates got a head onto it and diverted it past Chris Johns to put Glenavon in front.

The Blues – in purple today – equalised on 13 minutes. Linfield broke down the right through Kirk Millar, despite calls for an offside from the Glenavon bench. The final touch came off a Glenavon defender for a corner, which Lavery headed home.

They could have gone in front on 18 minutes when Kirk Millar whipped in a free kick, which was headed over once again by Lavery.

Andy Hall had an effort midway through the first half when the ball ricocheted into his path, however Johns was equal to his effort.

Glenavon, kept pushing and Danny Purkis managed to fashion a chance when he was slipped in on goal by Andy Hall. The resulting corner, from Campbell, was headed off the line. Eventually the ball fell for Matthew Fitzpatrick, who made no mistake on 29 minutes.

Then, on 38 minutes, they could have added a third when another Campbell corner was punched off the line by Johns just as it was turning in.

As the second half got underway Jimmy Callacher headed over a Niall Quinn free kick, then a Joel Cooper free kick right on the edge of the box came back off the wall after Campbell brought down Cammy Palmer – the winger earning a booking for his troubles.

Up the other end Matthew Snoddy almost finished off a well worked move after the ball was laid off to him by Campbell, but his shot was deflected wide for a corner.

Just after the hour mark had rolled around Glenavon doubled their lead. A short corner was played to Singleton, who whipped the ball across goal for Purkis to steer the ball home.

Craig Hyland pulled out an outstanding save on 67 minutes to deny substitute Andy Waterworth after he connected with Stephen Fallon’s cross, with the goalkeeper tipping the bar over for a corner.

Linfield pulled a goal back in spectacular fashion through another substitute. Christy Manzinga struck lucky with a free kick on 72 minutes from the Linfield left. He rifled the ball over the top of Hyland and in off the far post.

Johns pulled out an outstanding save on 78 minutes to deny Purkis as a high ball fell kindly for the striker. He took a touch and just as it looked like he had got past the goalkeeper, Johns scooped it away on the ground.

However, it didn’t matter – Glenavon held on to get the win over the league leaders. 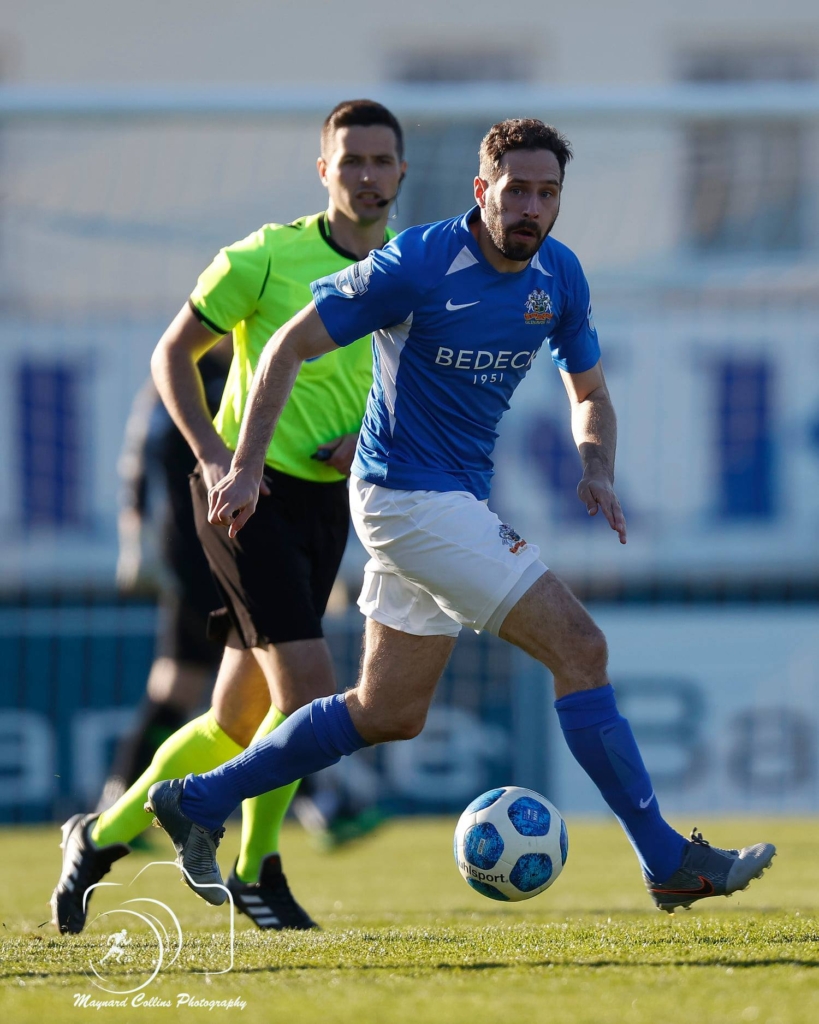 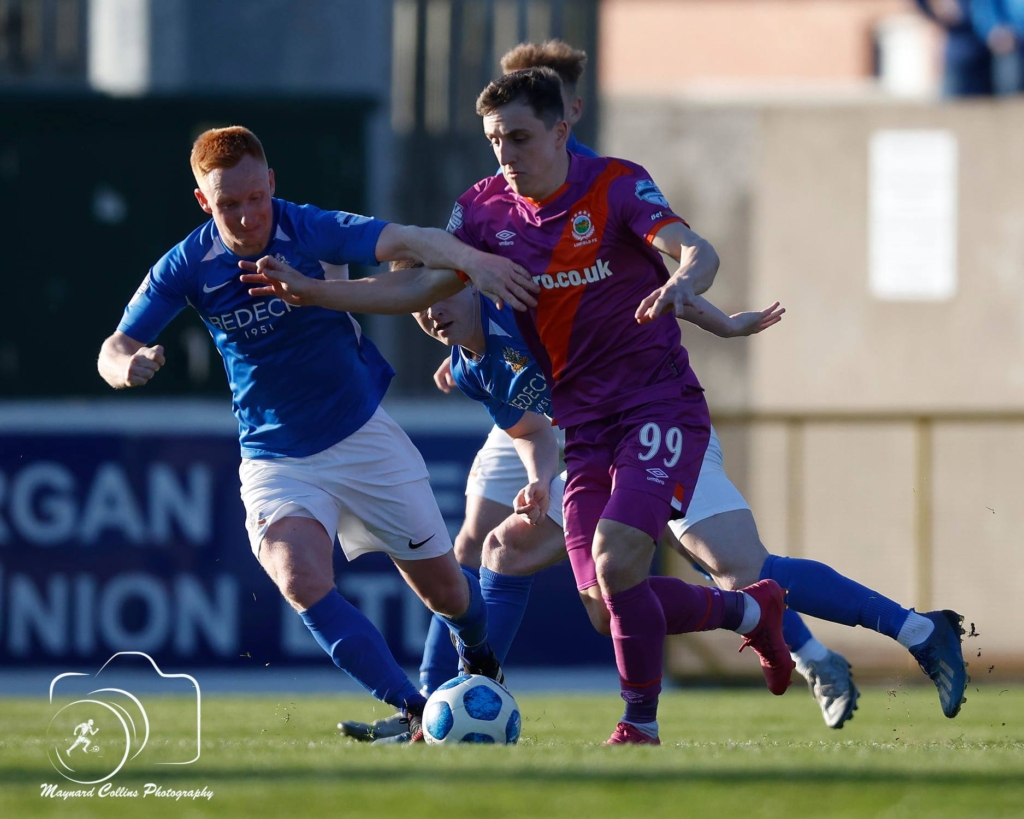 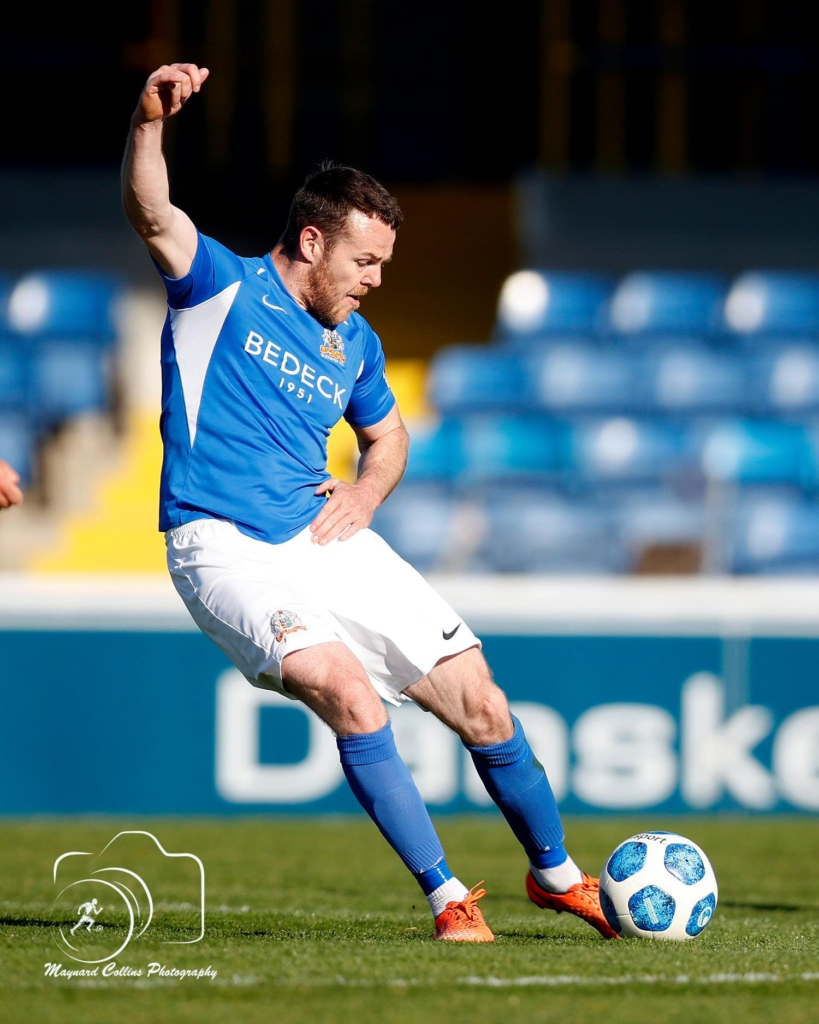 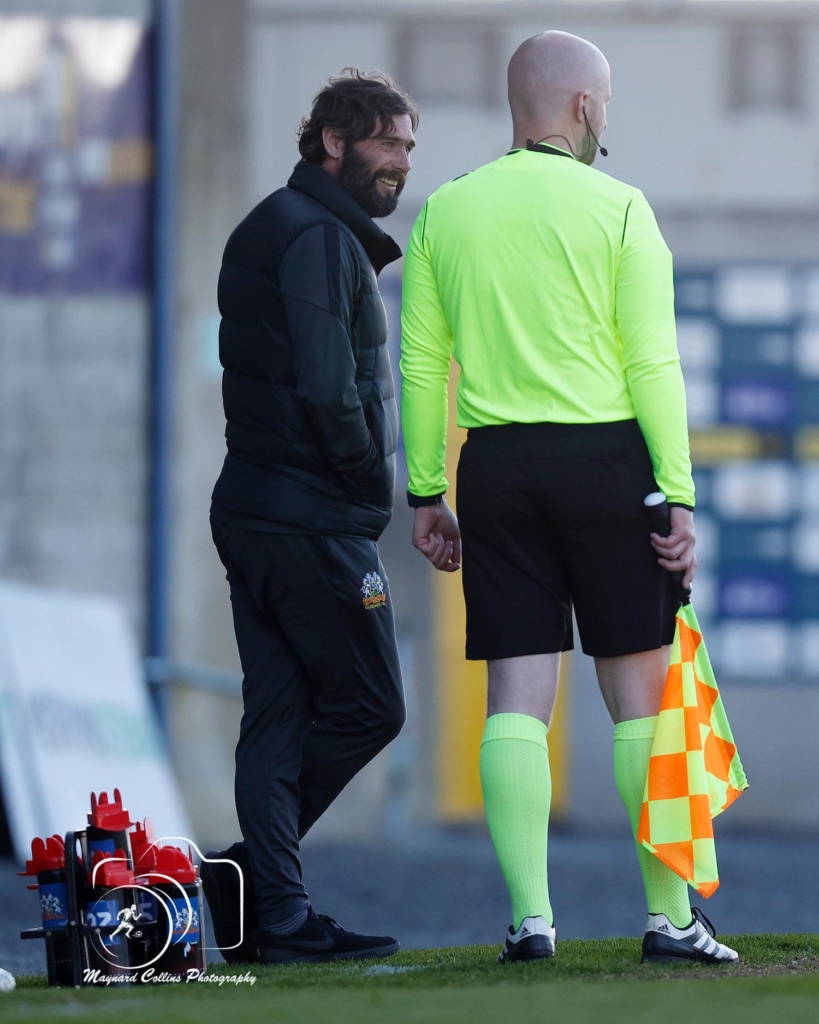 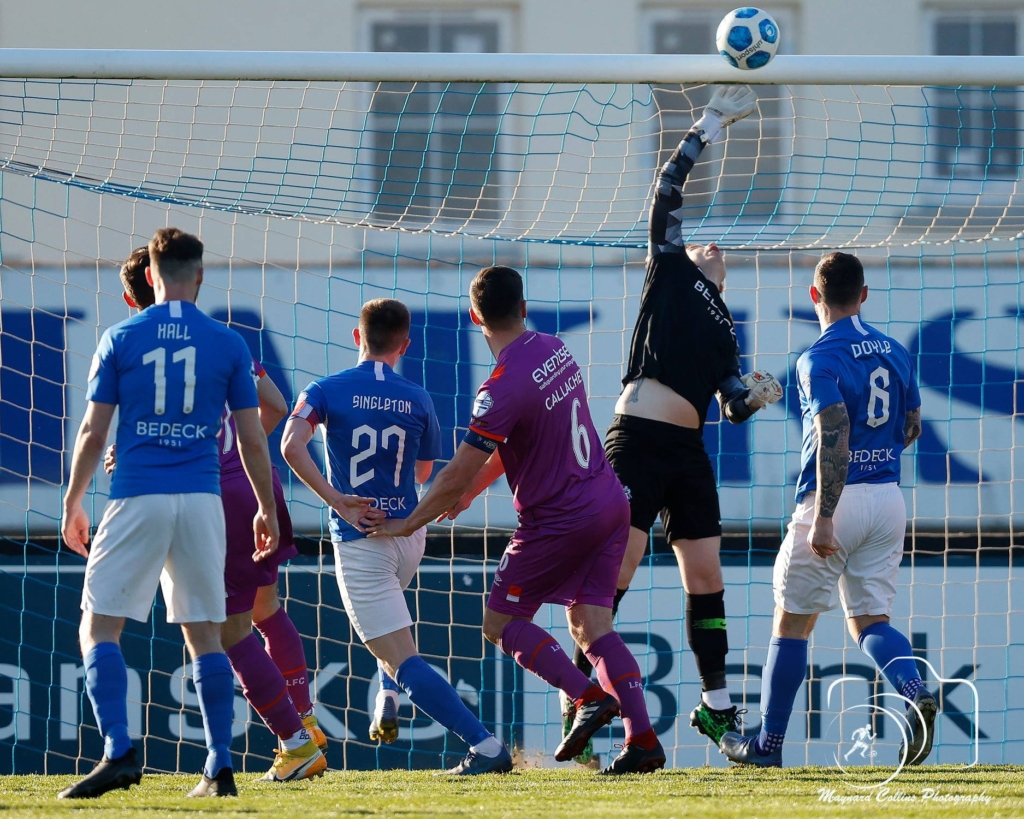 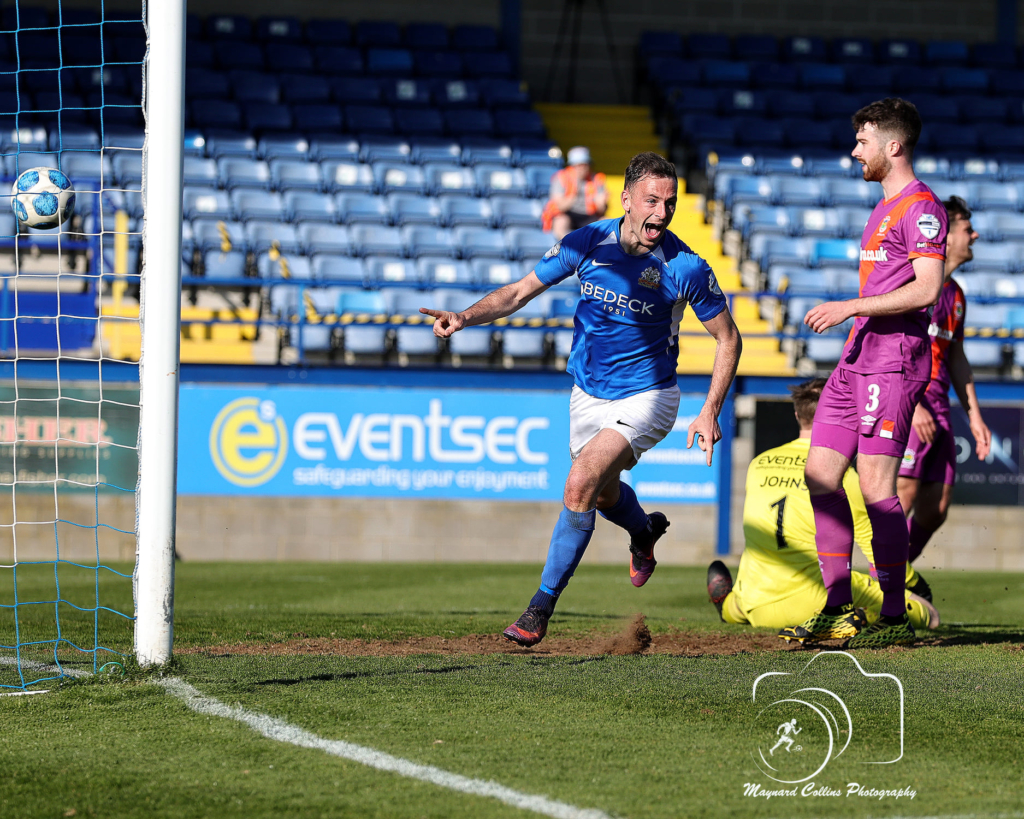 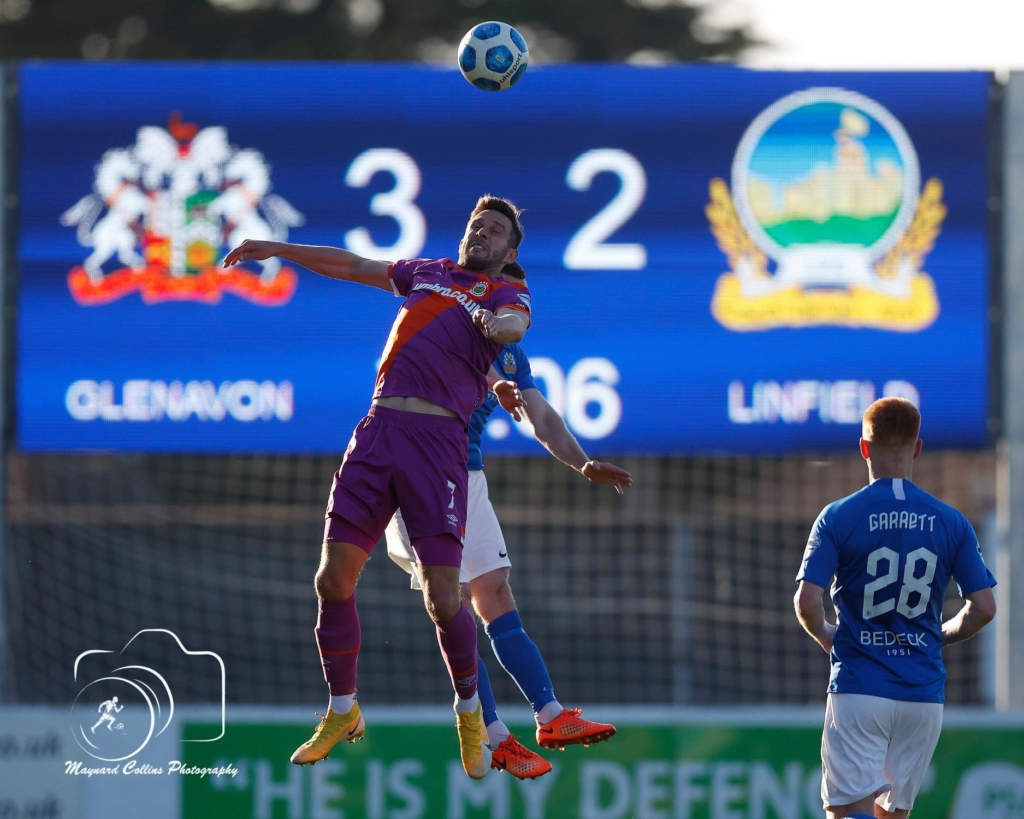