Glenavon lost 2-1 to Linfield at Mourneview Park in their first league game of 2021 on Saturday afternoon.

The Lurgan Blues went in front midway through the first half when Danny Purkis headed home following a Sammy Clingan corner.

Linfield responded three minutes into the second half when Niall Quinn glanced in a header from a Kirk Millar free-kick.

Glenavon proceeded to squander a number of great opportunities to get their noses in front again as the second half wore on before being hit by a stunning counterpunch of a goal from Jordan Stewart, who spectacularly volleyed home on 79 minutes to grab all three points for the reigning Danske Bank Premiership champions.

In a game which was open, there was little action of any consequence in the early minutes. Matthew Fitzpatrick won a free-kick in a dangerous position in the 12th minute and Clingan stepped up to take it. The former Linfield midfielder’s effort was well struck and went narrowly wide of Chris Johns’ left-hand post.

Four minutes later at the other end, Andrew Waterworth crossed from the left to pick out Stewart. The diminutive forward pirouetted to create space for a shot, but he could only loop his effort over the crossbar.

The deadlock was broken by the home side in the 23rd minute. Clingan sent an inswinging corner over from the left which was flicked on by Connor McCloskey. The ball was then met by Purkis inside the six-yard box and he had the simple task of heading home to make it 1-0.

Purkis might have scored again six minutes later when he squeezed a shot on target from the left-hand side of the penalty area, but he didn’t make the correct contact and Johns made a simple save.

Clingan had an effort at goal on 34 minutes but it drifted wide of Johns’ right-hand post.

A minute before the break, Jimmy Callacher connected with a Linfield corner and directed his effort on target, but Glenavon goalkeeper Jonny Tuffey managed to keep it out and ensured the Lurgan Blues took a 1-0 lead into the break.

Unfortunately, that lead wasn’t to last too long in the second half, as Quinn hauled Linfield level on 48 minutes. He met a Millar free-kick from the left flank at the near post and sent a glancing header looping beyond Tuffey and into the far corner to make it 1-1.

Sponsor’s man of the match Sean Ward went close with a shot from distance moments after Connor Pepper had produced an excellent tackle to deny Fitzpatrick in the 54th minute.

Stewart had two efforts at goal in quick succession for the visitors on 60 and 61 minutes. First of all, he attempted to chip Tuffey but failed to execute it properly and the ball harmlessly floated into the Glenavon stopper’s arms, then he blasted a shot high over the bar from distance.

Tuffey’s opposite number Johns had to be at his best to deny Glenavon in the 64th minute. He blocked McCloskey’s initial shot before springing up and racing off his line to make a superb follow-up save from Robert Garrett.

Glenavon missed a glorious opportunity to regain the lead on 71 minutes. Clingan’s corner from the right led to a couple of efforts which were blocked by the Linfield defence before the ball fell to McCloskey a few yards from goal. The winger blazed his shot over the bar when he really should have made the net bulge.

Another wonderful chance went begging two minutes later. This time Purkis was sent clear to find himself one-on-one with Johns. The Glenavon striker poked his low shot wide of the left-hand post.

McCloskey had another opportunity to score in the 78th minute, although this one wasn’t nearly as good a chance as his previous one. He was stretching to get his head to a Clingan free-kick and couldn’t quite manage to direct his header on target.

There was a real fear that Glenavon would live to regret these missed chances, and sure enough that proved to be the case when Stewart won the game for Linfield a minute later in spectacular fashion. The flight of Jimmy Callacher’s clearing header was misjudged by Andrew Doyle and eventually the ball was contested for by Glenavon’s Daniel Larmour and Linfield’s Navid Nasseri. Home players appealed for a handball by Nasseri, while the away players cried for a foul on the substitute by Daniel Larmour. Referee Andrew Davey raised his arms to signal that an advantage was being played, suggesting he interpreted the incident in Linfield’s favour. As play continued it quickly became evident that Stewart was paying little attention to anything except the ball as he produced a stunning volley from 20 yards which flew beyond Tuffey and into the far corner.

Glenavon struggled to respond to this killer blow, and in truth Linfield looked more likely to add a third rather than the home side find an equaliser in the closing minutes, and the game finished 1-2.

A tough one to take for the Lurgan Blues, who deserved at least a point from this game, and but for some wasteful finishing could quite easily have come away with all three.

Next up for Glenavon is the second Mid Ulster derby of the season, as Gary Hamilton’s men travel to Shamrock Park next Saturday (9th January) to take on rivals Portadown in a game that was rearranged from Boxing Day. Kick-off is at 3pm. 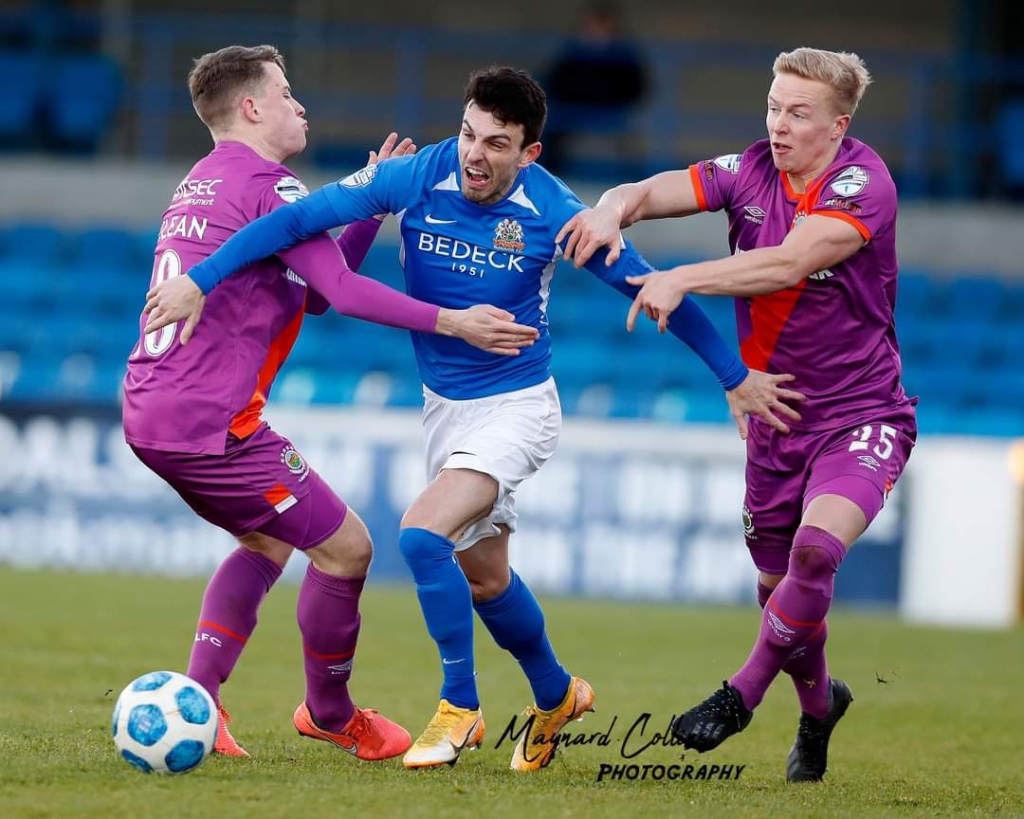 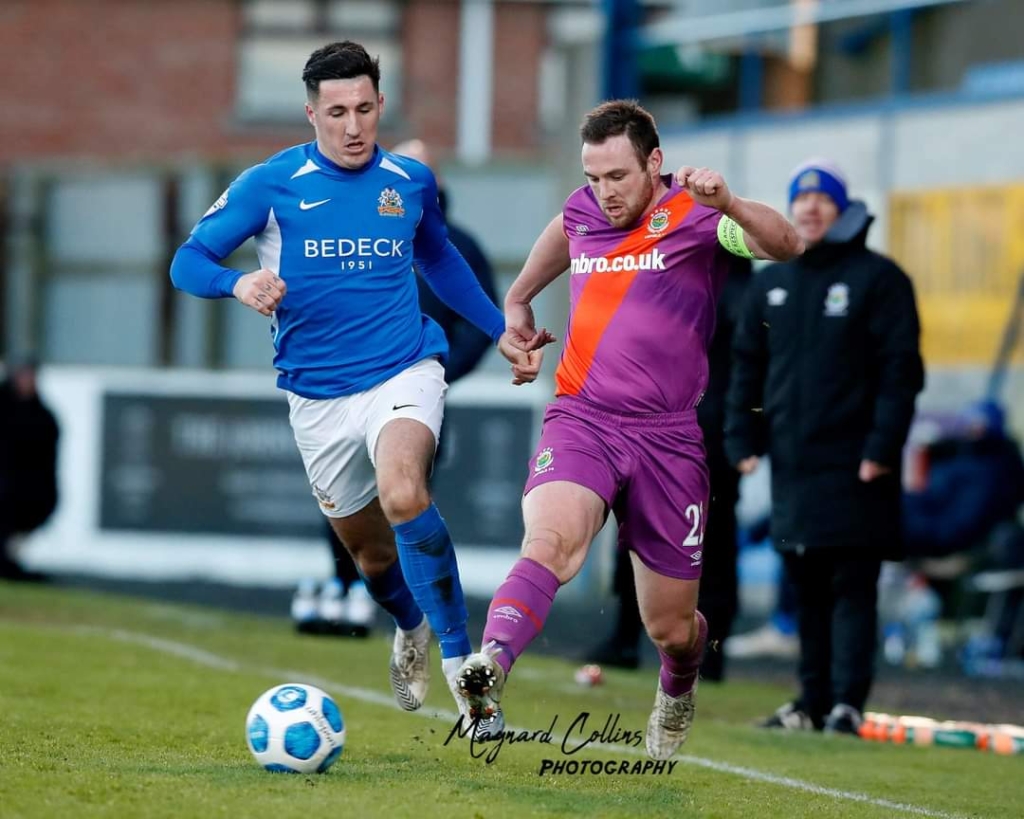 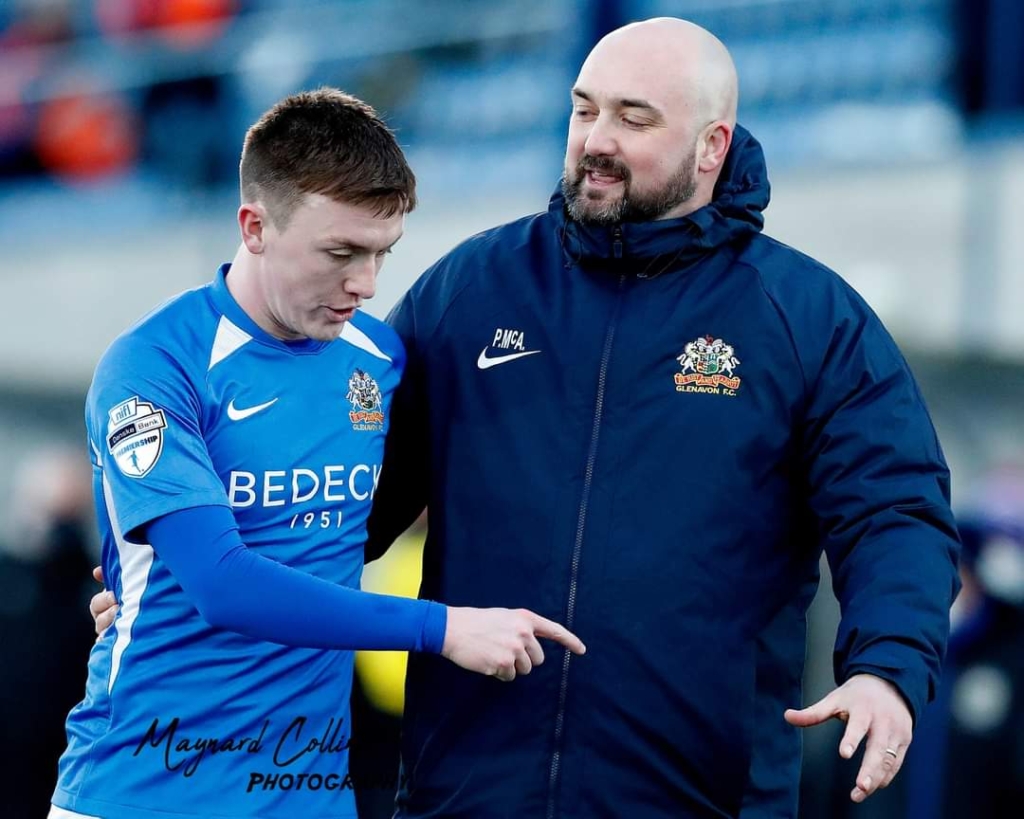 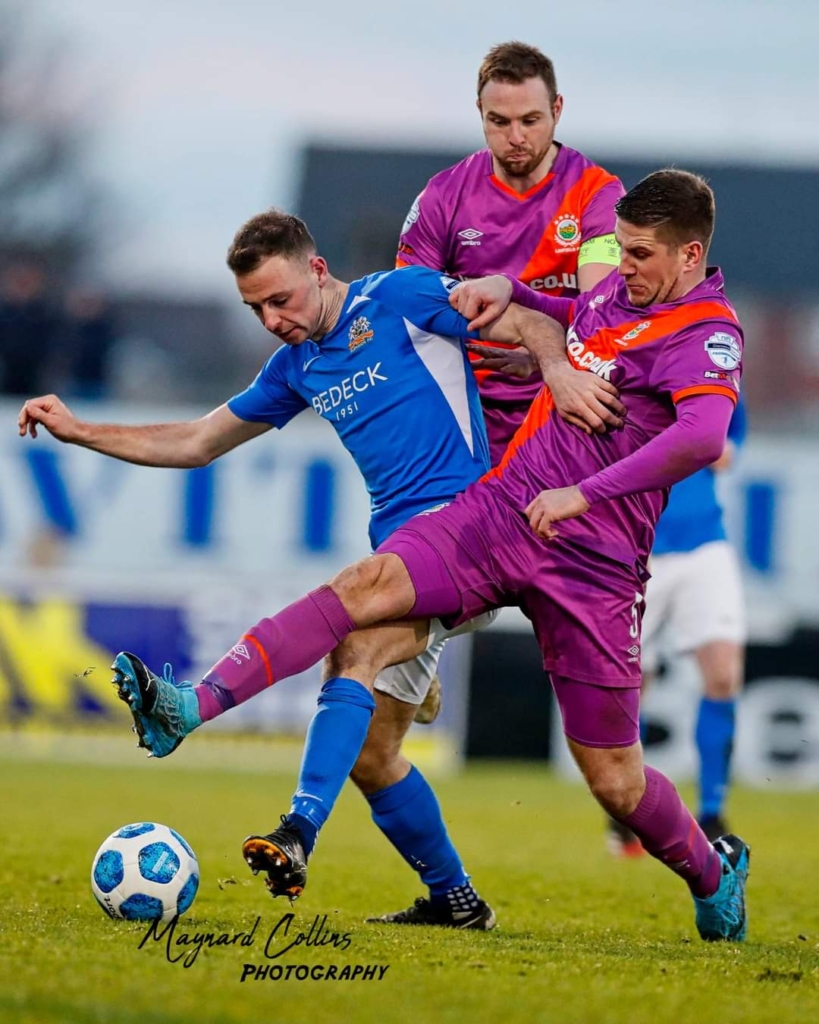 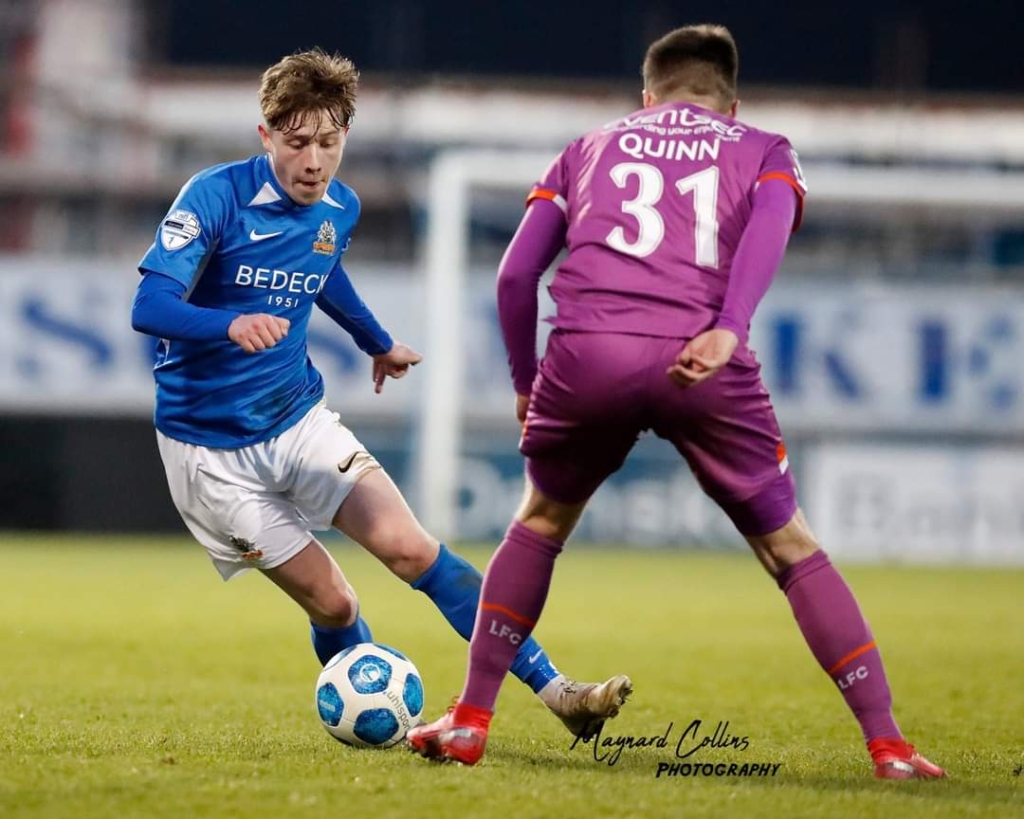 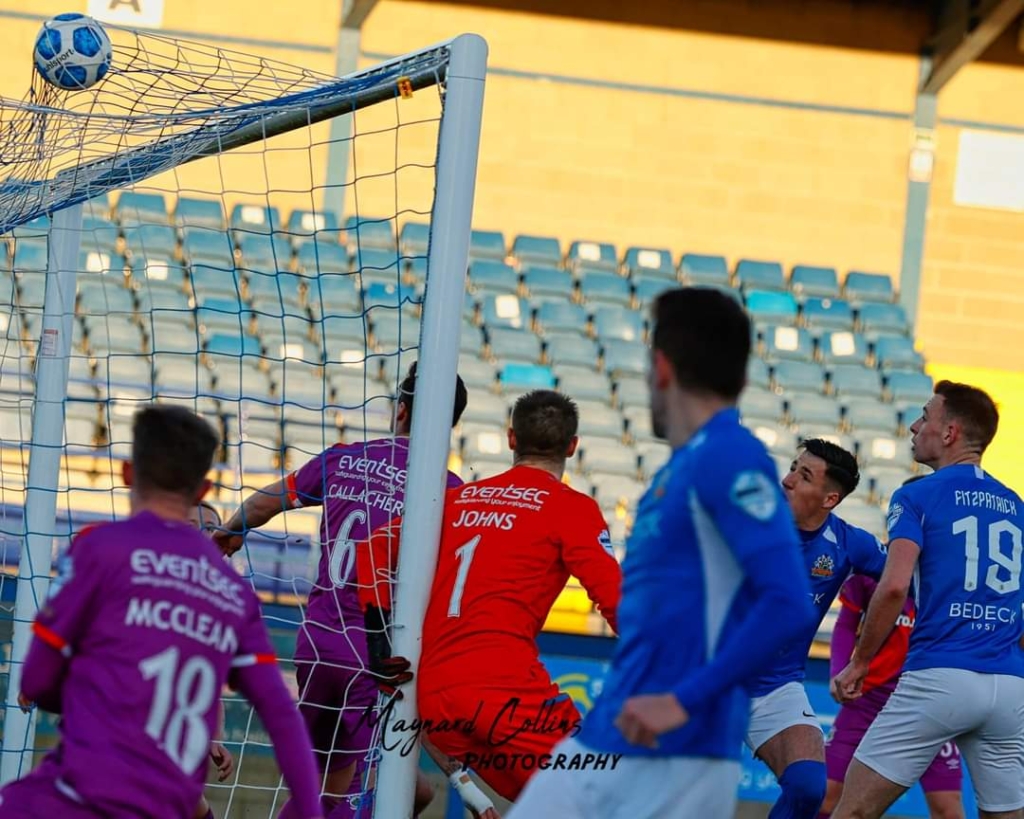 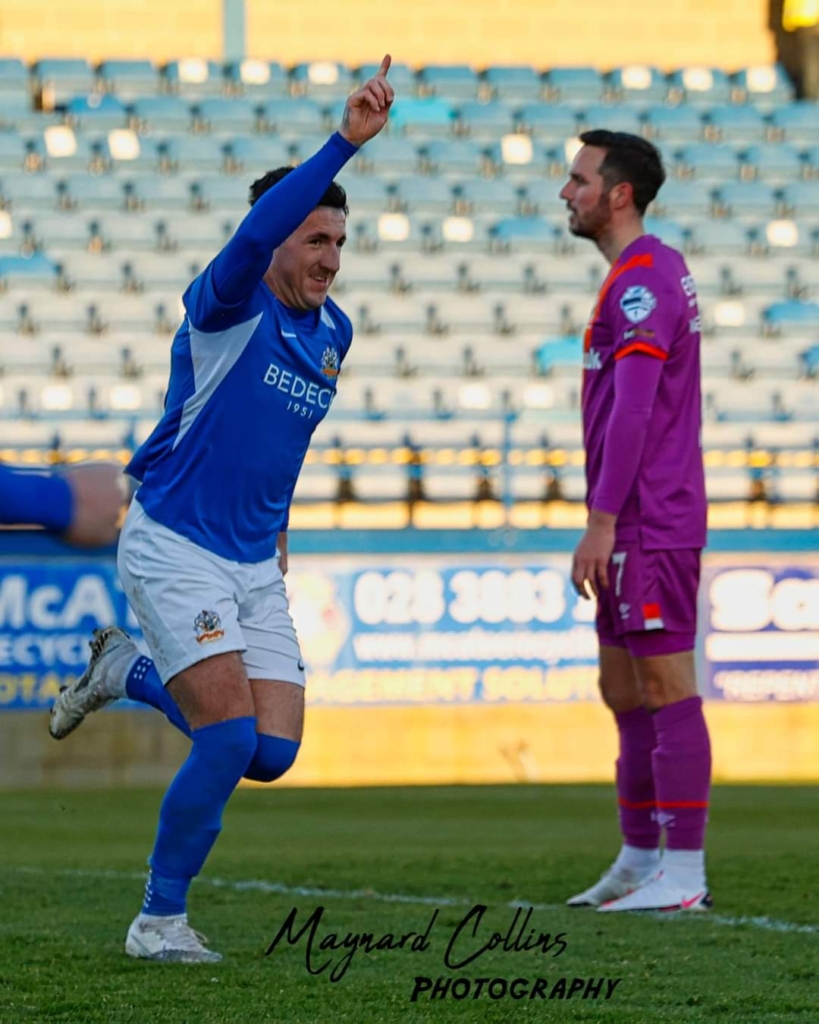