Skip to content
Previous Next
Match report: Dan’s the man as Blues get a point off Reds

Glenavon and Cliftonville played out an entertaining 1-1 draw in front of the Sky Sports cameras at Mourneview Park on Monday night.

Cliftonville substitute Daire O’Connor fired the Reds in front on 67 minutes when he latched onto a long ball forward from Aaron Donnelly and slotted into the far corner.

The away side’s lead lasted less than five minutes, however, as Glenavon striker Danny Purkis ran onto goalkeeper Jonny Tuffey’s long free-kick and drilled a low shot beyond Richard Brush in the Cliftonville goal to draw the home side level.

Cliftonville started the brighter of the two sides, but it was Glenavon’s Purkis who had the first clear sight at goal in the fifth minute. The striker’s left-footed half-volley was straight at Cliftonville goalkeeper Brush, though, who made a routine save.

Seven minutes later at the other end of the pitch, Michael McCrudden was released into the Glenavon penalty area following Ronan Doherty’s pass. The forward’s low shot was on target, but Tuffey made the save with his right leg.

Daniel Larmour got his head to a Michael O’Connor corner on 18 minutes, but the centre-back couldn’t direct his effort on target.

There were some suggestions that Cliftonville defender Ryan O’Reilly handled the ball inside his own penalty area on 32 minutes, but referee Tony Clarke was unmoved.

The home side had much stronger appeals for a penalty against O’Reilly turned down two minutes later when the defender challenged Matthew Fitzpatrick on the six-yard line. Again, Clarke was uninterested.

Michael O’Connor had an opportunity to shoot at Brush’s goal on 43 minutes when Glenavon won a free-kick in a dangerous position, but the midfielder’s effort went well over the bar and the game remained scoreless at the break.

Substitute Conor McCloskey came agonisingly close to opening the scoring for Glenavon in the 57th minute when his spectacular effort from 25 yards out cannoned off the crossbar. Brush in the Cliftonville goal was beaten all ends up.

The visitors took the lead against the run of play 10 minutes later through Daire O’Connor. The substitute raced onto a long ball forward from Donnelly, nipped clear of Glenavon captain James Singleton and slotted a left-foot shot past Tuffey and into the far corner to open the scoring.

It wasn’t to be long before Glenavon hit back, however, and there were similarities between O’Connor’s goal and Purkis’ equaliser. Tuffey took a free-kick deep inside the Glenavon half and the ball travelled all the way into the Cliftonville penalty area. Purkis took full advantage, getting to the ball first and firing a low first-time shot through the legs of Brush and into the net with his right foot to draw the Lurgan Blues level.

Paddy McLaughlin brought Joe Gormley on for the visitors with 10 minutes to go. Unsurprisingly, Cliftonville’s record scorer did have a couple of opportunities in the closing minutes. First, he did well to fashion a shooting chance for himself in the 89th minute when he cleverly beat Andrew Doyle with a stepover, only to drag the subsequent shot wide of Tuffey’s far post. Then, in what was virtually the last action of the game, Gormley ran onto a long clearance from fellow substitute Seanan Foster, but he couldn’t get the ball out of his feet quickly enough, enabling Doyle to get back and pressurise him, and eventually all Gormley could do was shoot high and wide with his left foot.

The closest Glenavon came to finding a winner was in the 90th minute, when goalscorer Purkis picked out substitute Conan Byrne at the back post with a cross from the left flank. Byrne angled his header towards the far corner, but Brush dived to his right and made a smart save to deny the winger.

Honours even in the end, a result that sees Glenavon move up to seventh place in the league table.

Glenavon were arguably the better side for much of the game, particularly in the second half, and manager Gary Hamilton will no doubt feel his team was unfortunate not to come away with all three points.

Next up for the Lurgan Blues is a trip to Milltown on Saturday (19th December) to take on Warrenpoint Town, who sit one point and one place above Glenavon in the Premiership standings. 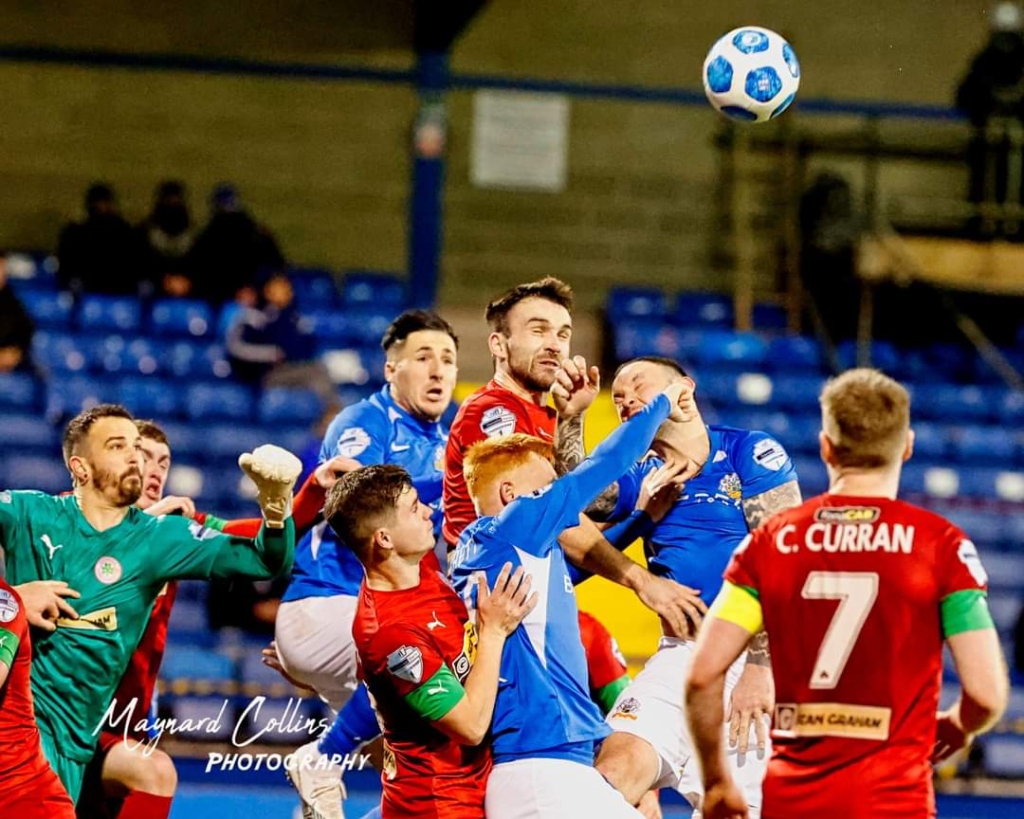 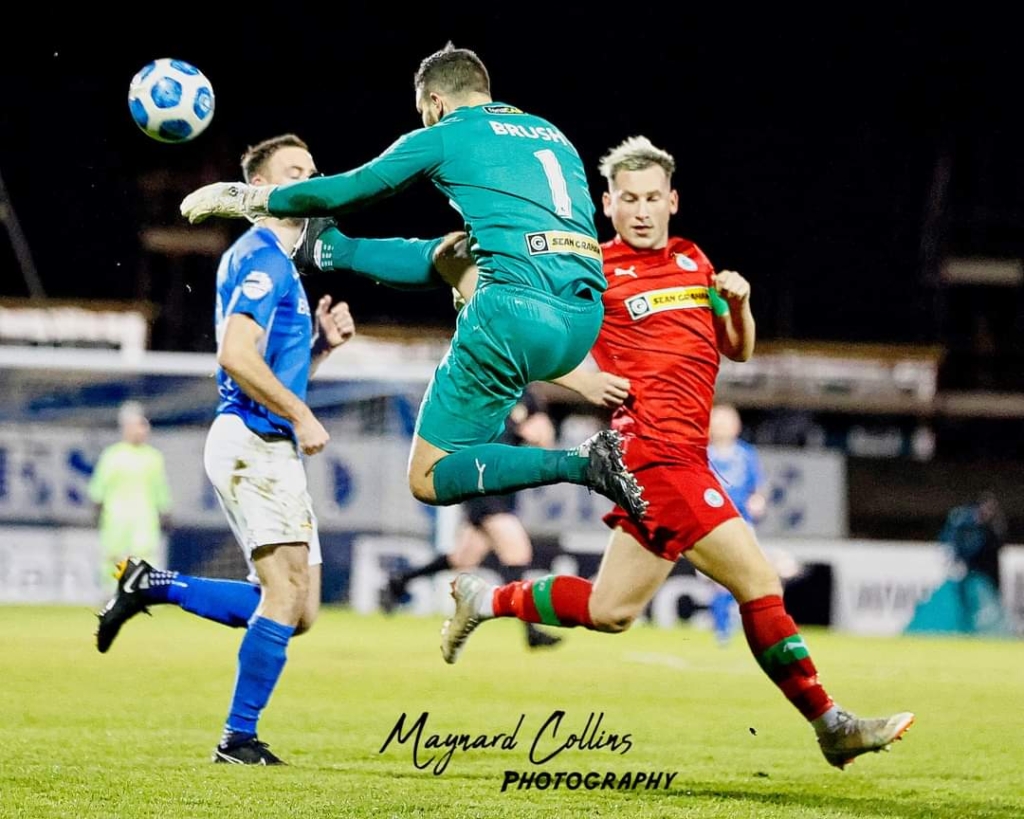 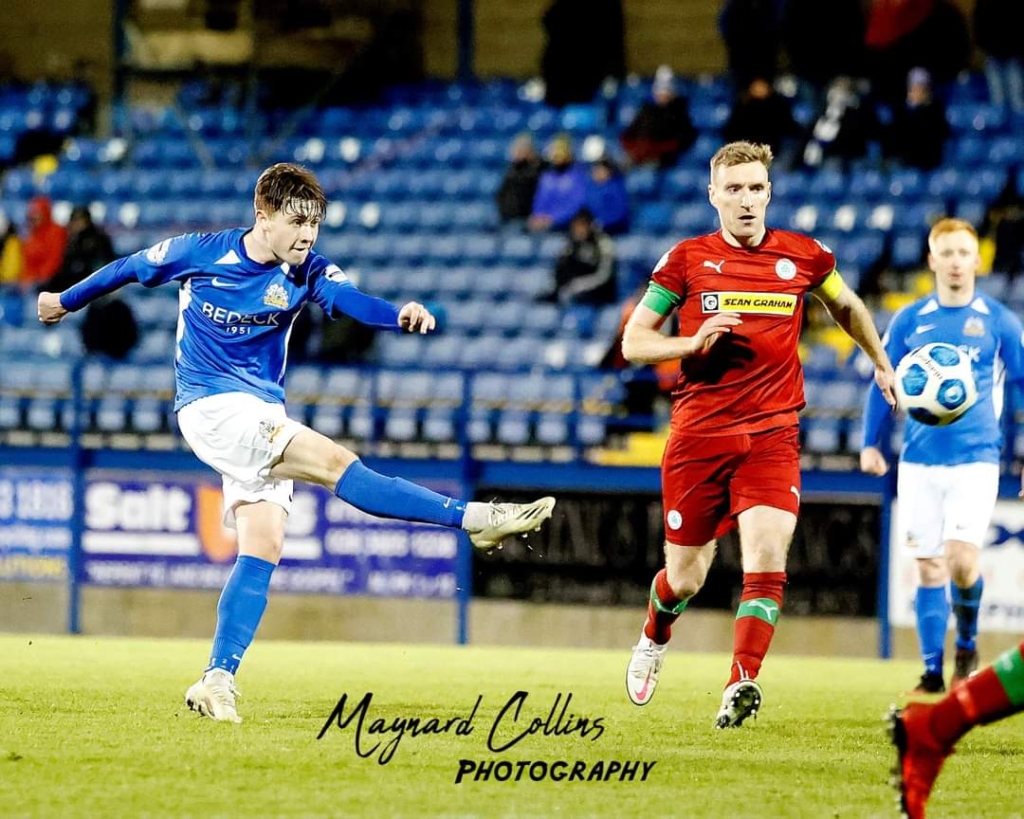 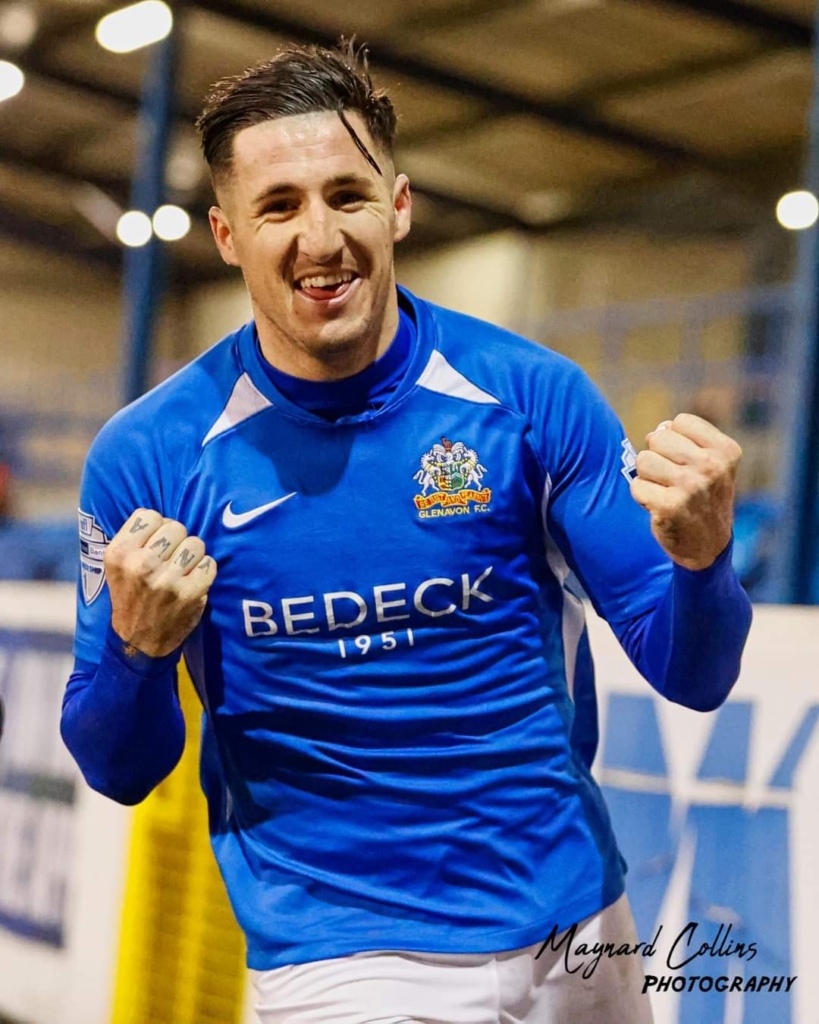 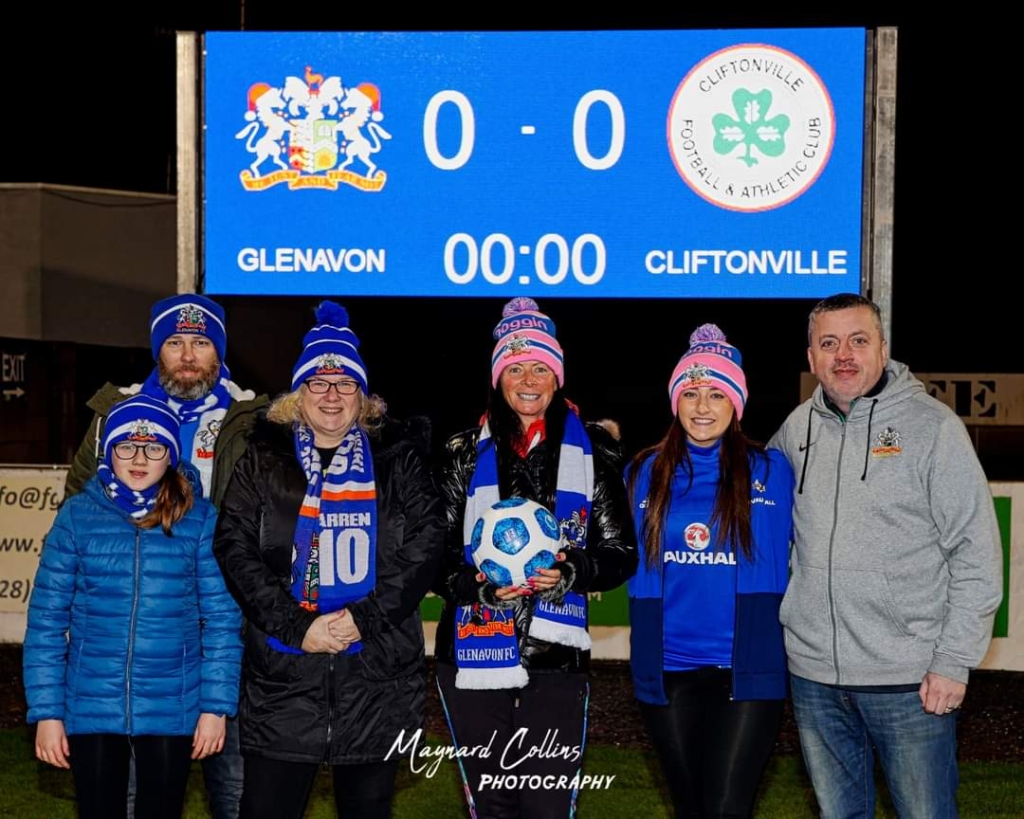 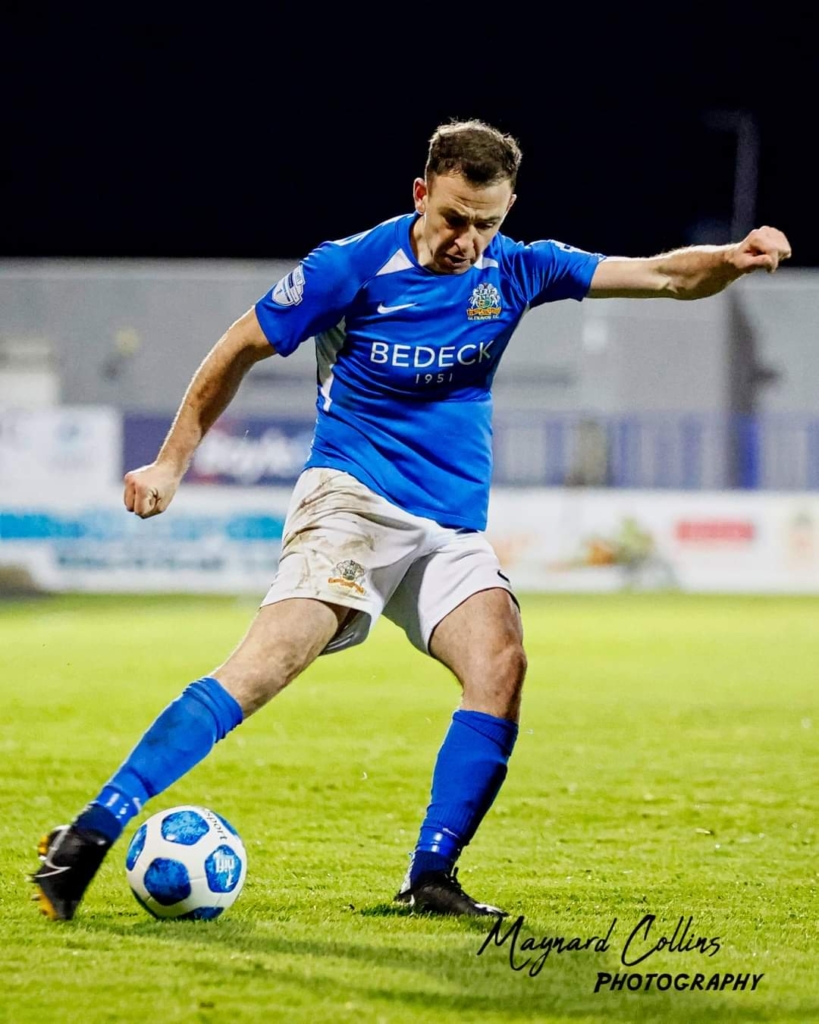