Skip to content
Previous Next
Match report: Glenavon put it up to Linfield but come away empty handed

A Stephen Fallon lob and a Shaye Lavery tap in gave the champions all three points in a game where the Lurgan Blues certainly put it up to their opponents.

But the big talking point in the game was referee Jamie Robinson’s decision not to send of Christy Manzinga for punching Daniel Larmour on the back of the leg just minutes after the Linfield player had come on as a sub.

The visitors had an early chance to take the lead when Conor McCloskey was brought down inside the Linfield half. Michael O’Connor had a pop from about 30 yards out and his effort went narrowly wide of the outstretched Chris Johns’ near post on three minutes.

The hosts had a chance of their own on 10 minutes when Kirk Millar was allowed to cross from the right into the box towards Navid Nasseri on the edge of the six yard box, but he could not connect properly with it and Jonny Tuffey was able to take it easily.

Glenavon had another chance on 16 minutes when a loose ball fell kindly for Matthew Snoddy. However, he perhaps had more time than he thought he had and his effort went well wide of the mark.

Linfield went in front on 25 minutes when Kyle McClean clipped a ball forward towards Waterworth but Stephen Fallon nipped onto it. He caught out Tuffey with a cheeky lob to make it 1-0.

Glenavon sought an immediate response and Conor McCloskey’s curling shot was denied by a great Johns save just after the restart.

Gary Hamilton had asked his Glenavon side for an improvement from their previous two visits to Windsor Park, and as the first half drew to a close there was a sense that his side had delivered so far. An O’Connor free kick could have sent them in level at half time but he narrowly missed the target, while McCloskey volleyed a Daniel Purkis cross over the bar.

Linfield almost grabbed a second on 52 minutes when a corner swung in by Niall Quinn was met by the head of Jimmy Callacher, but Sean Ward did amazingly well to clear it off the line.

Again Glenavon looked to level and had a good opportunity on 59 minutes when Robbie Garrett was brought down on the edge of the Linfield box. McCloskey took the resulting free kick, with the set piece once again going wide. Garrett, who was on a yellow card from a first half challenge would be subbed shortly afterwards with Jack O’Mahony taking his place. Greg Moorhouse was also brought on for Purkis.

Glenavon were angered by Jamie Robinson’s 68th minute decision not to send off Christy Manzinga. He had only been on the pitch a matter of minutes when he clashed with Daniel Larmour in the Glenavon box and appeared to punch Daniel Larmour in the back of the leg. The referee opted to just award a yellow card.

Moments later Sean Ward volleyed over after Fitzpatrick’s cross was headed back by O’Mahony into the defender’s path.

Manzinga was involved as Linfield got their second. He headed down a free kick which Tuffey looked to have gathered up on the ground, but somehow it spilt into the path of Shayne Lavery who only had to tap in to make it 2-0.

Gary Hamilton and Paul McAreavey were incensed by Jamie Robinson’s decision not to send off Christy Manzinga.

Second half substitute Andy Hall rises for a header.

Sean Ward had another good game for Glenavon. 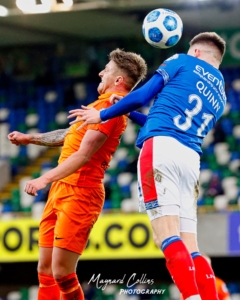 James Singleton and Niall Quinn jump for a header. 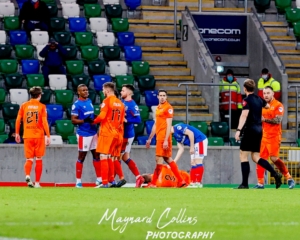 Daniel Larmour lies on the ground as referee Jamie Robinson approaches Christy Manzinga. He would only be shown a yellow card. 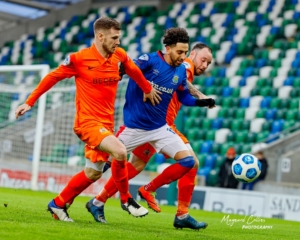