Glenavon and Coleraine produced an eight-goal thriller at Mourneview Park on Saturday afternoon, eventually sharing the spoils in a pulsating 4-4 draw.

Any supporters who coughed up the £5 to watch the live stream of the game certainly got their money’s worth. As well as the eight goals, there were six yellow cards, a red card, and two penalties, not to mention a hat-trick.

The Bannsiders took the lead in the second minute when Stewart Nixon headed in Lyndon Kane’s cross, before defender Gareth McConaghie was shown a straight red card for a reckless challenge on Peter Campbell.

Ben Doherty doubled the away side’s lead on 18 minutes by taking advantage of a defensive mix-up, but Glenavon hit back to level the score with goals from Conor McCloskey and Daniel Purkis.

Doherty grabbed his second from the penalty spot in the 41st minute to hand Coleraine a 3-2 lead at the break.

Oran Kearney’s men found themselves two goals ahead for the second time when Doherty completed his hat-trick on 58 minutes.

Back came Glenavon again, however. Michael O’Connor slotted a penalty past Gareth Deane on 69 minutes to reduce the deficit, and former Coleraine striker Matthew Fitzpatrick drew the home side level in the 78th minute.

There might even have been a last-gasp winner, as the Lurgan Blues had strong penalty appeals turned down by referee Evan Boyce in the final minute of injury time when substitute Conan Byrne went down under a challenge from Stephen Lowry.

It took just 65 seconds for Coleraine to grab the lead. Jamie Glackin swept a ball out to the right for Kane to run onto and the full-back curled in a first-time cross which was met by the head of Nixon, who guided his effort past Jonny Tuffey and into the net.

The Bannsiders were reduced to 10 men on 14 minutes when McConaghie was shown a straight red card. The defender’s robust challenge left not only Glenavon’s Campbell requiring treatment, but also McConaghie’s own teammate Kane, and referee Boyce deemed the tackle to be dangerous enough to warrant a red.

Nonetheless, it was Coleraine who grabbed a second goal in the 18th minute. Doherty picked Curtis Allen out with a superb slide-rule pass and the striker saw his shot cannon off the crossbar. Calum Birney attempted to shield the ball for Tuffey to come out and claim it, but Doherty followed up and nipped in between the two to gain possession before composing himself and slotting in to double the Bannsiders’ lead.

Glenavon finally came into the game as the first half reached its halfway point, and after a period of sustained pressure, McCloskey’s low shot from the edge of the box was deflected past Deane in the 24th minute to reduce the deficit.

The Lurgan Blues drew level six minutes later when Purkis converted an O’Connor free-kick which the striker himself had won when he was cynically hauled down by Evan Tweed.

But it was to be Coleraine who took a lead into the half-time break. Kane made a brilliant surging run into the Glenavon penalty area on 41 minutes and he was upended by Sean Ward. Referee Boyce awarded the penalty, which Doherty smashed down the middle to get his second goal of the game.

Coleraine again found themselves two goals clear when Doherty completed his hat-trick on 58 minutes. Campbell’s under-hit back pass was picked up by Glackin and he squared the ball for Doherty. Tuffey made an excellent point-blank save to keep out Doherty’s first effort, but he was powerless to prevent his former teammate from tapping in the follow-up.

The topsy-turvy game swung back in Glenavon’s favour as the second half wore on, and the Lurgan Blues grabbed their third goal from the penalty spot in the 69th minute after Daniel Larmour was brought down by fellow-substitute Steven Douglas, although the Coleraine players were convinced that the foul had occurred outside the box. The impressive O’Connor converted by drilling his low penalty just inside the left-hand post.

Glenavon hauled themselves level for a second time nine minutes later when Fitzpatrick scored against his former club. McCloskey sent a long throw-in into the box from the left and the attempted clearance came back out to the Glenavon winger, who scooped a high cross into the area. Colin Coates managed to get his head to the ball and nodded it down to Greg Moorhouse. The substitute’s subsequent shot was saved by goalkeeper Deane, but the rebound fell to Fitzpatrick and he found the net despite the best efforts of Josh Carson to keep the ball out on the line.

The home side twice came close to finding a winner in the last five minutes of normal time. Glenavon’s player of the month for October, Robert Garrett, saw a shot cleared off the line after he’d been teed up by Fitzpatrick on 85 minutes, while O’Connor’s rasping effort from 25 yards out four minutes later cannoned off the crossbar after catching Deane unawares.

In the third minute of injury time Glenavon were convinced they had won a penalty when Lowry appeared to bring down substitute Byrne, but referee Boyce didn’t point to the spot. Lowry clearly made no contact with the ball, so Boyce was left to decide if he should award a penalty or show Byrne a yellow card for simulation. Inexplicably, the referee did neither, merely allowing play to continue instead, and a frenetic game came to a close with a final score of 4-4.

A third successive draw for Gary Hamilton’s side, who will be hopeful of securing their first win of the campaign on Tuesday night (10th November) when they travel to Warden Street to take on Ballymena United (kick-off 7.45pm). 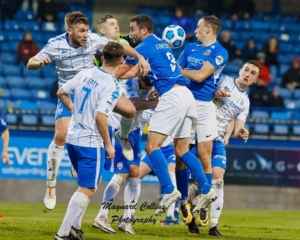 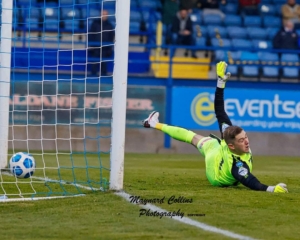 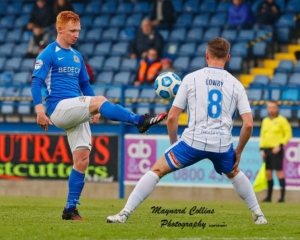 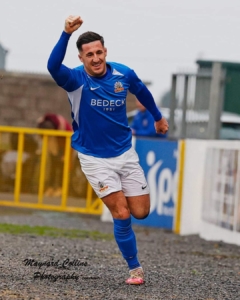 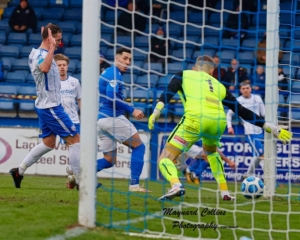 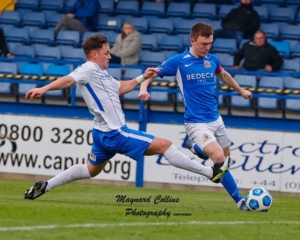