Conor McCloskey missed a first-half penalty as Glenavon and Dungannon Swifts played out a 0-0 draw at Mourneview Park on Saturday afternoon.

The spot-kick was awarded on 20 minutes when Swifts goalkeeper Sam Johnston upended Glenavon striker Danny Purkis, but McCloskey sent his penalty over the bar.

In a game that was played in very blustery conditions, chances were few and far between. On 14 minutes Glenavon won a couple of corners in quick succession. Dungannon defender Dylan King managed to head the first one behind, while Glenavon captain James Singleton glanced a header wide from the second one.

A minute later Jordan Jenkins delivered a cross from the left which was intended for McCloskey, but Alan Teggart cut the delivery out for the Swifts.

Jenkins was involved again on 17 minutes when he was superbly tackled by Dylan O’Kane just as he was about to pull the trigger.

Sean Ward saw his effort from 25 yards out tipped over the bar by Swifts keeper Johnston in the 18th minute.

Glenavon squandered a great opportunity to open the scoring in the 20th minute when McCloskey missed the target from 12 yards. Referee Steven Gregg awarded the spot-kick after Dungannon keeper Johnston had taken out Purkis. McCloskey was entrusted with taking the penalty, but his effort sailed over the bar and the game remained scoreless.

Good build-up play from the away side on 28 minutes saw the ball laid back for Daniel Hughes to have a shot, but he couldn’t keep his effort down and Jonny Tuffey was untroubled in the Glenavon goal.

Ward picked out Purkis with a cross from the right in the second minute of the second half, but the striker couldn’t direct his header on target.

Purkis had another big shout for a penalty on 57 minutes when he was again involved in a challenge with Johnston. The Glenavon forward went down as he attempted to bring the ball round the goalkeeper, but this time referee Gregg was uninterested, much to the consternation of the Glenavon players and supporters.

Dungannon captain Kris Lowe hit a well-struck shot from 20 yards in the 61st minute, but it was straight at Tuffey and the Glenavon goalkeeper saved easily.

Lowe then missed a great chance to put the Swifts ahead on 74 minutes when he blazed a volley over the bar following a cross from the left from substitute James Convie.

Ten minutes later the Dungannon captain did manage to find the net, only for his effort to be ruled out for offside.

The closest Glenavon came to breaking the deadlock in the closing stages was when sponsors’ man of the match Robert Garrett played a ball across the Swifts’ penalty area in the 76th minute, but nobody in a blue shirt could manage to get on the end of it.

A disappointing stalemate for the Lurgan Blues, who are still searching for their first league win of the season.

Apologies that we are unable to bring you Gary Hamilton’s post-match interview – this is due to a technical issue. 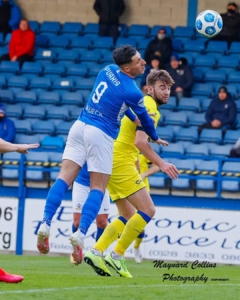 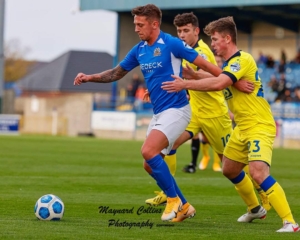 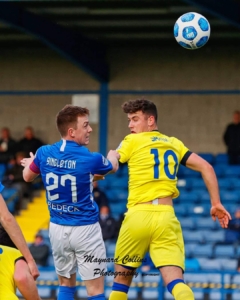 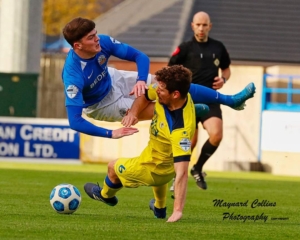 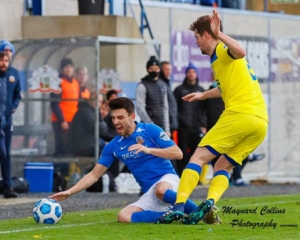