Glenavon are delighted to confirm that Saturday’s game against Dungannon Swifts will be the first Danske Bank Premiership match to be streamed live by the club.

All home games at Mourneview Park which are not being screened by BBC Sport NI or by Sky Sports will be shown on the 247.tv/niprem platform, where supporters may have seen the coverage of Saturday’s game against Glentoran at the Oval.

The Glenavon Media team have been working hard behind the scenes to set up the stream, which it is hoped will allow supporters who can’t get to games in the current climate or who perhaps are living abroad to follow their team.

Our Media Officer, Michael Scott, will be on commentary and we are pleased to confirm that joining him behind the mic for the Swifts game will be club legend and former manager Stevie McBride. 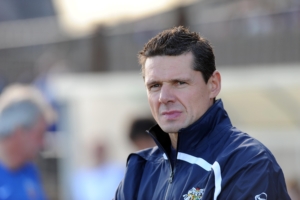 Former manager, Stevie McBride, will join the Glenavon Media team on commentary for the game against Dungannon Swifts, the first ever to be streamed live by the club.

As an introductory offer, the stream will cost just £5, with a free replay available after the game for those who want to relive the action. If you can’t watch the game live on Saturday you can still watch the replay for just £3.

We would encourage anyone interested in watching the game to register at 247.tv as soon as possible to make the purchasing process as easy as possible.

Our in-house production will include features and interviews, while fans at home can interact by using the #GlenavonAtHome hashtag on Twitter.

More details on how to sign up and watch the stream through your TV or device will be available on our website soon.