Skip to content
Previous Next
Match report: Nine-man Glenavon secure an unlikely point at the Oval

Nine-man Glenavon snatched a hard-earned point against the odds on Saturday.

With a number of enforced changes, playing away from home with no supporters and having to play most of the game with fewer players than their opponents, not many would have given the Lurgan Blues a chance.

Gary Hamilton asked for an improved defensive performance – he got that. And he asked for improved deliveries into the box – he got that too, with a well-whipped ball finding Calum Birney for a fantastic equaliser that felt like a winner.

Gary Hamilton decided to opt for a change in formation, going for five at the back with Colin Coates and Birney being partnered in the centre of defence by Andrew Doyle. Sean Ward and James Singleton were the two full backs.

Matthew Snoddy and Robbie Garrett were the central midfield pairing with Campbell and McCloskey the wide men while Danny Purkis was our man up top.

The better of the early exchanges fell to Glentoran. They were awarded a 12th minute free kick after Coates was booked for a tackle on David McDaid. Jamie McDonagh’s free kick was flicked on by a stretching Andrew Mitchell but it evaded all those at the back post.

The five men at the back were reduced to four on 22 minutes when Doyle received his marching orders after bringing down Cricky Gallagher. On first viewing it looked harsh, the defender admittedly late but the tackle was still low.

And there was another nervy moment a short time later when Coates and Mitchell went down after clashing in the penalty box. Referee Tavinder decided to take no action against either player, although Snoddy received a booking for dissent. Coates was subbed off a short time later with Daniel Larmour taking his place.

Glenavon’s first half chance came on the half hour mark when a McCloskey free kick sailed in towards Snoddy, but his glancing header went past the post. At the other end Dale Gorman’s shot from distance sailed over the crossbar.

Singleton found himself going into the book after the referee awarded a free kick for a foul on ex-Glenavon defender Caolan Marron. Singleton wasn’t happy with the decision, throwing the ball down in disappointment, leading to the booking.

Straight from the restart Mitchell found himself in the the referee’s notebook following a clash with Singleton.

The visitors soon had a shout for a penalty when Campbell was brought down on the edge of the box but Tavinder waived play on.

On 53 minutes came one of the best chances of the game. It came the hosts’ way as a cross from the left into the box was punched out by Taylor. It was played back in towards Mitchell with his effort – a hard one to get to – went wide.

Glenavon were reduced to nine men when O’Connor, who had only just come on, was brought down by Campbell. His second yellow card of the game, having been booked in the first half for a foul on Dale Gorman, was followed by the inevitable red.

Jordan Jenkins, who came on midway through the second half, created a great opening for Glenavon when he broke through the middle from inside his own half, beat a man around the halfway line and spread the ball wide for McCloskey, but his shot went over the ball.

Glentoran were awarded a penalty on 76 minutes following a sustained period of pressure. After a series of corners O’Connor was brought down inside the box by Snoddy. Robbie McDaid stepped up and sent James Taylor the wrong way.

But their lead was to be short lived. McCloskey was brought down to the right of the Glentoran box. He dusted himself down and swung in a free kick which was headed home by Calum Birney on 78 minutes.

And the same pairing nearly put Glenavon in front with another McCloskey free kick taken deep inside the Glentoran half towards the centre half, this time with the header going over.

Luke McCullough could have put the Glens in front with three minutes to go. A long range drive was well saved by Taylor, tipped over the bar.

Andy Hall, who was sitting on the subs bench for trying to engage in a spot of time wasting in the 90th minute.

And despite four minutes of stoppage time pressure the nine-man Lurgan Blues held on for an unlikely point, which felt more like a win. 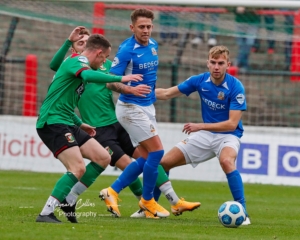 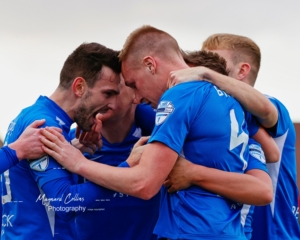 Calum Birney is embraced by his team mates after equalising against Glentoran at the Oval. Photo: Maynard Collins. 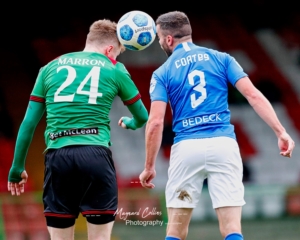 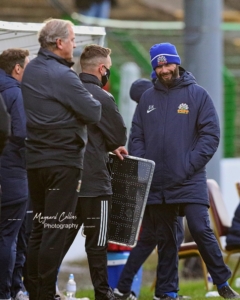 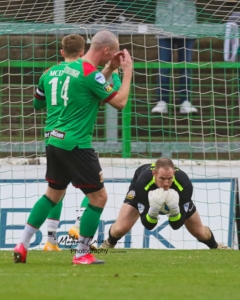