Former Glenavon striker Stephen Murray scored twice and set up two other goals on his return to Mourneview Park on Saturday evening as newly-promoted Portadown ran out 4-2 winners in the first mid-Ulster derby since 2017.

Murray opened the scoring on seven minutes when he converted from Ben Guy’s cross.

The striker then slotted the ball under Glenavon goalkeeper James Taylor to grab his and the visitors’ second goal in the 31st minute.

Peter Campbell tapped in substitute Conor McCloskey’s cross to halve Glenavon’s deficit nine minutes into the second period, but Murray turned provider as he crossed for strike partner Lee Bonis to fire past Taylor and restore the Ports’ two-goal advantage in the 81st minute.

Glenavon captain James Singleton gave the Lurgan Blues hope when he headed home McCloskey’s corner five minutes from time, but substitute Aaron Burns scored with the last kick of the game to wrap up the three points for Portadown.

Murray made the move from Mourneview Park to Shamrock Park back in January, and on his return to the home of his former club he appeared to be out to prove a point. It took him just seven minutes to get on the scoresheet. Another former Glenavon player, Lavery, was involved in the build-up, clipping a ball down the line on the left flank for Guy to run onto. He squared first time to find Murray at the back post, and the striker had the simple task of tapping in to break the deadlock.

Glenavon struggled to create any real clear-cut chances in the opening half hour. Robbie Norton had a go from distance on 22 minutes, but his shot flew over the bar.

Murray grabbed his second goal to double the Ports’ lead on 31 minutes. Lavery nipped in to rob the ball from Conan Byrne midway inside his own half before driving forward and playing a brilliant through-ball to send Murray clear. Taylor raced off his line to try and deny Murray, but he simply rolled the ball beyond the goalkeeper and into the net to make it 2-0 to the visitors.

Glenavon desperately tried to hit back before half-time. Byrne played the ball back to Matthew Snoddy from a free-kick on 42 minutes, but the midfielder could only drag his shot wide of the target.

A minute later it looked like a Campbell cross from the left was going to pick out Jordan Jenkins, only for Ports defender Paddy McNally to make a superb late interception to ensure his side carried the two-goal lead into the break.

The visitors had the first effort on goal of the second half when Bonis struck a first-time shot on target in the 50th minute, but it was a comfortable save for Taylor.

Half-time substitute McCloskey started to make things happen for Glenavon in the early minutes of the second period, and it was no surprise to see him create the Lurgan Blues’ first goal. He took a long throw-in from the right which was headed out of the box by McNally. Jack O’Mahony picked up the loose ball and played it out to his fellow substitute McCloskey. The winger slid a low first-time cross across the six-yard box and Campbell met it at the far post to pull a goal back for the hosts on 54 minutes.

Jenkins had an opportunity for Glenavon just two minutes later, but he didn’t make the right connection with his left-footed shot and the ball looped over the bar.

The home side came agonisingly close to bagging an equaliser in the 71st minute. Campbell’s shot was deflected and Danny Purkis managed to head the ball goal-ward, but Portadown defender Greg Hall did brilliantly to head the ball off the line and preserve his team’s advantage.

Moments later Hall was booked when he scythed Purkis down just outside the penalty area. Campbell’s effort from the resulting free-kick was heading for the far corner, but Portadown goalkeeper Ben Pierce dived at full stretch to his right and managed to get fingertips on the ball to keep it out.

Just when Glenavon had the momentum and it looked like they were going to draw level, it was Portadown who struck again on 81 minutes. Murray turned provider this time. Nathan Kerr picked him out with a ball down the right channel and Murray produced a cross of real quality to find his strike partner Bonis, who slid in and fired the ball high into the net to give Taylor no chance.

Captain Singleton offered Glenavon hope four minutes later when he headed in from McCloskey’s corner from the right to make the score 3-2.

McCloskey delivered another ball into the box from a free-kick on 89 minutes and Colin Coates glanced a header goal-ward, only for it to be deflected behind for a corner.

That was to be the closest Glenavon came to finding an equaliser, and in the end it was Portadown who struck again to seal their victory. Murray picked up the ball on the left wing following a Taylor clearance and slipped a pass inside for substitute Burns. He carried the ball into the Glenavon penalty area before hitting a shot with his left foot which beat Taylor at the near post. The Glenavon goalkeeper really should have done better.

That turned out to be the last kick of the game, with the match finishing Glenavon 2-4 Portadown. A disappointing opening-day result for the Lurgan Blues against their Mid Ulster rivals. Gary Hamilton’s men will have an opportunity to bounce back next Saturday (October 24th) when they travel to the Oval to take on Irish Cup holders Glentoran (kick-off 3pm). 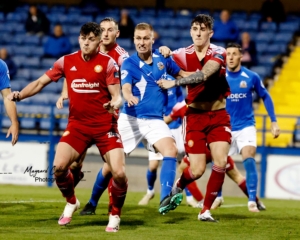 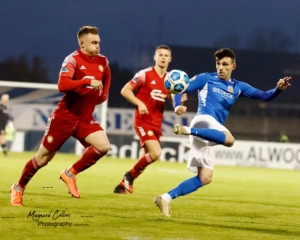 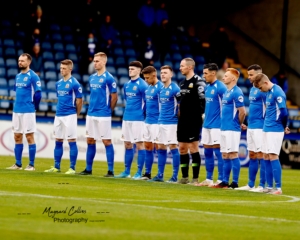 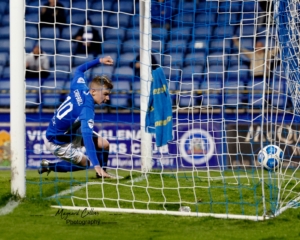 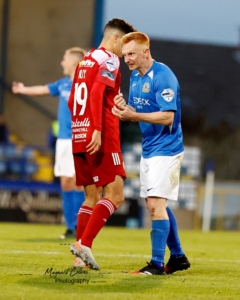