Glenavon have completed the signing of Northern Ireland international Michael O’Connor on a two-year deal.

The 32-year-old was previously with Salford City and has played for a host of EFL clubs including Crewe Alexandra, Scunthorpe, Rotherham United, Port Vale and Notts County.

O’Connor, who represented Northern Ireland on 11 occasions, joined Salford in January from Lincoln City, making eight appearances for the Ammies before COVID-19 forced football to shut down in the lower leagues of English football.

Gary Hamilton said he was delighted to land a player of O’Connor’s quality, adding that it was one of the biggest signings he has made during his time as manager at Mourneview Park.

“If you look at his career, since he turned 16 he has played consistently in the Football League.

“He only had one cruciate ligament injury in his career and besides that he has played week in, week out at most clubs that he’s been at.

“It’s another great signing and we’re delighted to get him on board. For a club like Glenavon, with the money there is about the league at the moment, to get Michael on board is a top signing for us.”

Michael told the club’s website that he was persuaded to join the club after speaking to both Gary and his former international teammate, Sammy Clingan.

“Sammy told me that I’d love the club, that the squad are a great bunch of lads and he also spoke highly of the coaching staff,” he said.

We’ll have more from Gary and Michael on the the club’s newest signing soon! 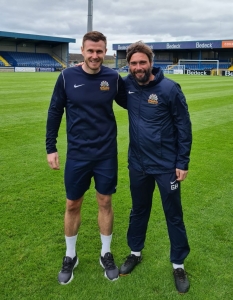