Glenavon have made two new signings and extended the contract of three young stars as preparations for the 2020/21 season continue to ramp up.

Pacey left winger Peter Campbell has joined from Loughgall on a three-year deal, having been chased by a number of other Premiership sides.

“He’s a player I’ve been trying to get for a few years and I’m delighted to finally welcome him to Mourneview Park,” said Glenavon manager Gary Hamilton.

“Back when we approached Loughgall their manager, Dean Smith, felt that he could do with a couple more years in the Championship.

“We also went back in for him in January when Coleraine were also trying to him.

“He has scored 15 goals from the wing this season and he’s very creative too – that’s why we have signed him. He reminds me of Joel Cooper in that regard and I certainly hope that Peter can have the same impact with us that Joel had when he joined us from Ballyclare Comrades.”

Striker Matthew Fitzpatrick has also signed from Coleraine. A GAA star for Antrim, the attacker has arrived late to the Irish League scene compared to others, but he has caught the eye during his short career in football.

“Matthew is another player we tried to sign in January and I’m pleased to get him on a two-year deal,” added Gary. 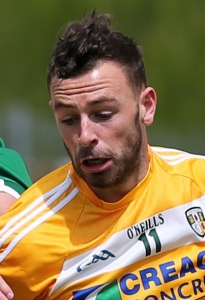 “I watched him when he was at Belfast Celtic along with our former coach Andy Mathieson. We tried to sign him along with Danny Purkis, but he opted for Coleraine.

“He’s a very powerful athlete, a lot like Eoin Bradley is and Skinner is one of the hardest players to play against in the league. He’s someone I see as being very much in that mould.

“Matthew has a great attitude and is full of hunger and desire to do well. He was a talented gaelic player for Antrim and you have to admire a player of his skill giving up the sport to give football a crack.”

“Robbie is working hard to get fit after tearing his cruciate last summer, but he needs games in order to be able to challenge.

“Everyone knows what I think of Ross and Oisin too, they’re two great young players. They both went out on loan in January but unfortunately, due to COVID it didn’t really happen for them.”