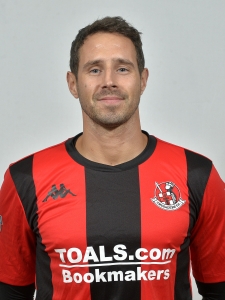 Sean Ward, who has signed a two-year deal with Glenavon. Picture: Crusaders FC

Gary Hamilton is delighted to announce the signing of Sean Ward from Crusaders.

The versatile 36-year-old has won league titles and Irish Cups with three big Belfast clubs – Linfield, Glentoran and Crusaders.
And it’s that winning mentality that Hamilton hopes Ward will bring to Mourneview Park.
“I’m pleased to be able to announce that we have signed Sean on a two-year-deal,” said Gary.
“We actually signed him on a pre-contract in January, and with the situation with COVID he will become a Glenavon player on August 1.
“He’s a player I know a lot about as I played with him at Glentoran. He’s a fit lad and he will bring us the experience and winning mentality we need at the club.”