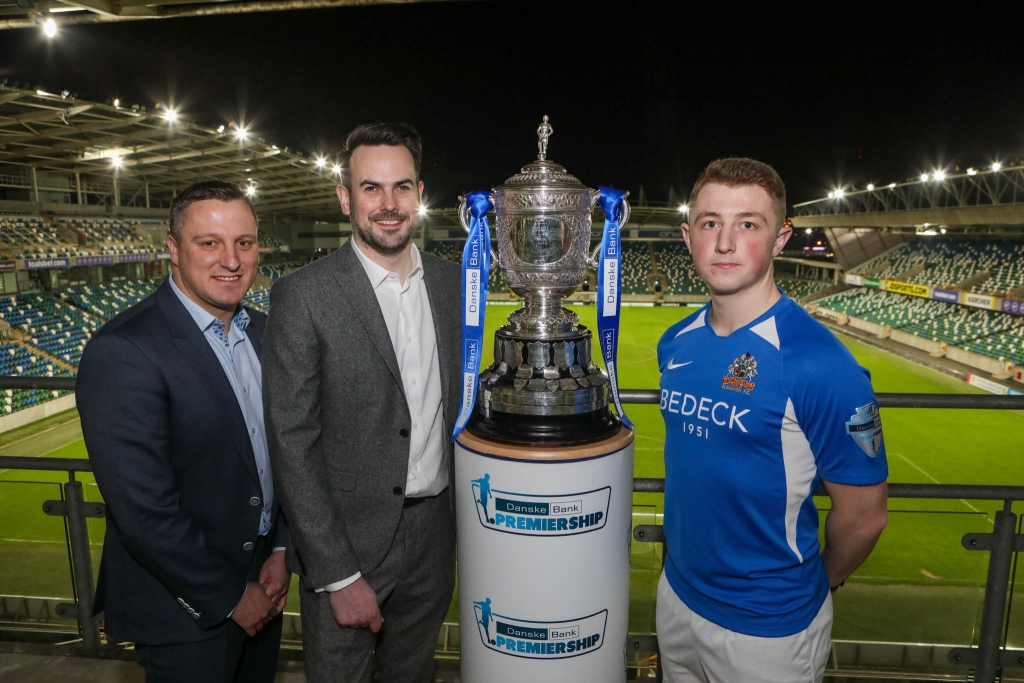 Robbie Norton represented Glenavon at the National Stadium at Windsor Park, as Danske Bank and the NI Football League announced the extension of their partnership for another three years, in a record breaking deal for the league.

Amid one of the most exciting title races in years, the partnership is currently in its eighth season of sponsorship and will bring Danske Bank into a decade of successfully leading at the forefront of football in Northern Ireland.

Managing Director of the NI Football League, Andrew Johnston, says that retaining a respected and well-known brand like Danske Bank sends a clear message that football in Northern Ireland is in a very strong position.

“The renewal of the Danske Bank Premiership sponsorship is fantastic news for the NI Football League, our clubs, our players and our loyal supporters.

“We have worked in partnership with Danske Bank since the inception of the NI Football League, and over that time we have built and developed a fantastic relationship which has not only brought more attention to the local game, but has seen attendance figures increase year on year, has bought more prominence to our top women’s league and provided support to our clubs off the pitch as well as on. We’re so looking forward to the next three years working together.”

“The Danske Bank Premiership and Women’s Premiership are some of the greatest showcases for local sporting talent in the country. They have such a huge following both here and abroad, making the Premiership one of the top sponsorship opportunities in Northern Ireland.

“At Danske Bank, supporting local sport is one of our absolute passions – from the grassroots and youth team levels right to the highest league of the Premiership. Over the last number of years, we’ve seen such passion from the fans, coaches and players, and we’ve seen huge growth in the ladies’ game that meant extending our partnership for another three years was an easy decision for us.

Since the first season of the Danske Bank Premiership in 2012/13 attendances in the league have grown 38%, with live television broadcasts of Premiership matches each season on BBC Two and Sky Sports.