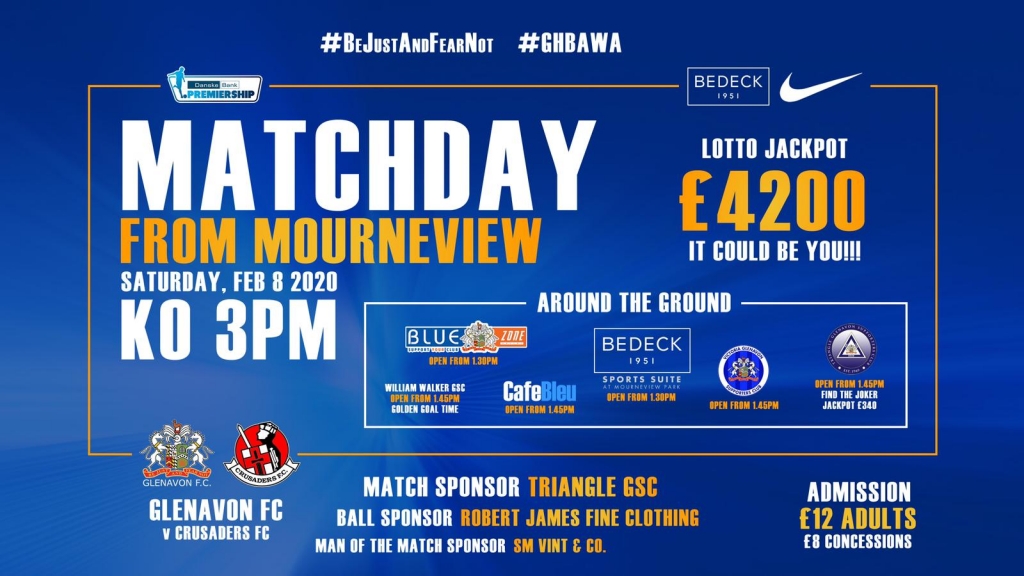 Glenavon returns to action for Matchday 28 with the visit of Crusaders tomorrow, kick off 3pm.

The Crues are the form team at the moment, winning their last 5 league games to move to within two points of the leaders Linfield. The last time Glenavon and Crusaders met, back in October at Mourneview, the match produced an exciting 2-2 draw. It took a stoppage time equaliser from Paul McElroy to salvage a point for Stephen Baxter’s side after second half goals from Jordan Jenkins and Stephen Murray had seen Glenavon take the lead after falling behind to a Jamie McGonigle goal just before half time.

Gary Hamilton is expecting a tough test tomorrow. “Crusaders are on a great run at the minute, winning games and not conceding goals. Everybody’s been talking about Glentoran and Linfield now all of a sudden Crusaders are looking strong and it’s a good time of the year to put a run together. It’s going to be a difficult game tomorrow, as it always is; they’re going to be coming full of confidence. Our boys have to go out and play with no fear. At the end of the day, there’s no expectation on our lads at the minute. It’s up to our boys to prove that we haven’t become a team that other teams are coming and expecting to win at. They have to prove that they’re better than that, that they can compete and get results.

“The one area we’ve let ourselves down in this year is obviously against the top six sides. We haven’t got enough results whereas in previous years we always got results. That has to change and is the reason why we have started to change the squad, starting to bring in players with winning backgrounds and winning mentalities and we’ll continue to look for those types of players. That’s one area where we’ve suffered this year: we haven’t had enough of them in the changing room and we missed Sammy (Clingan) for a long part of the start of the season. You need three or four of that type of character around young lads and inexperienced players to drive them on and keep them calm and make them not panic whenever they do go a goal or maybe even two behind. We used to do that and we need to get back to it again. From now to the end of the season it’s about working towards that, towards getting a settled team  and a settled squad that are going to come stronger next year. We don’t want another season like we’ve had this year so far.” 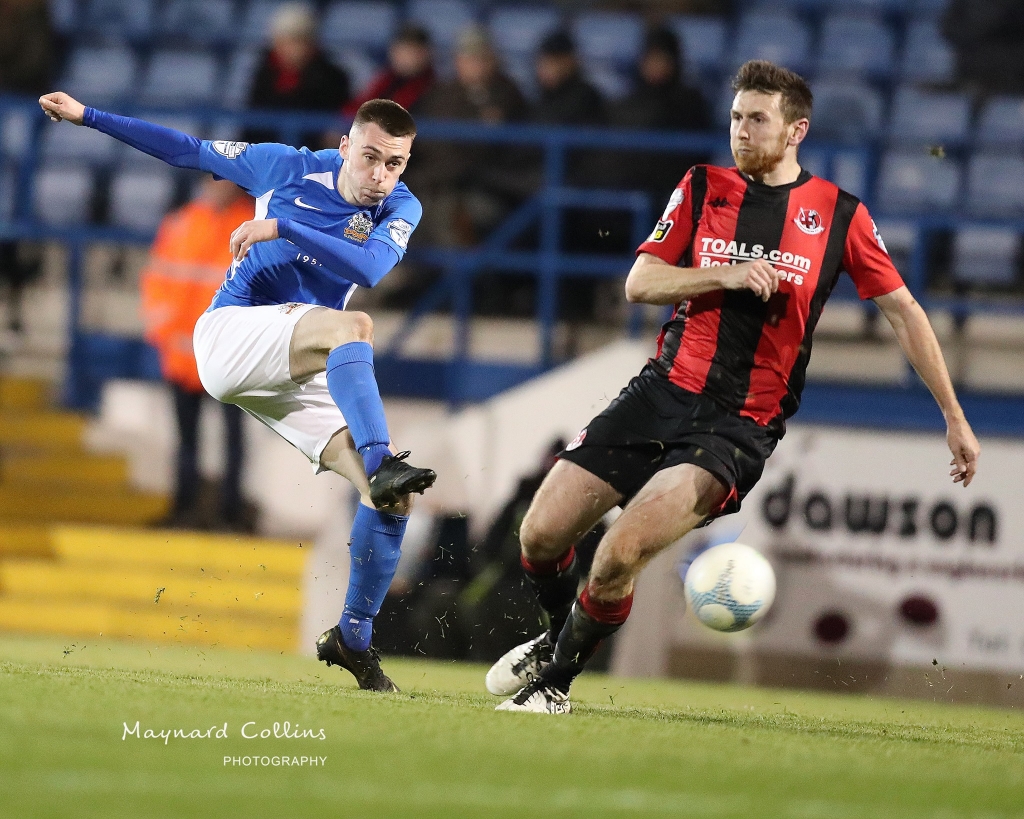 On-loan Matthew Snoddy is ineligible to play against his parent club and Colin Coates and Robert Garrett are both suspended. Jack O’Mahony is out after picking up a knee injury and Seamus Sharkey hasn’t recovered completely from concussion picked up against Loughgall in the Mid-Ulster Cup Final.

Andy Hall has come through a knee operation but is unlikely to be back in action before the end of the season. Robbie Norton is making good progress in his rehab programme following his pre-season operation on a torn cruciate and has this week been joining with the squad for a light training session. 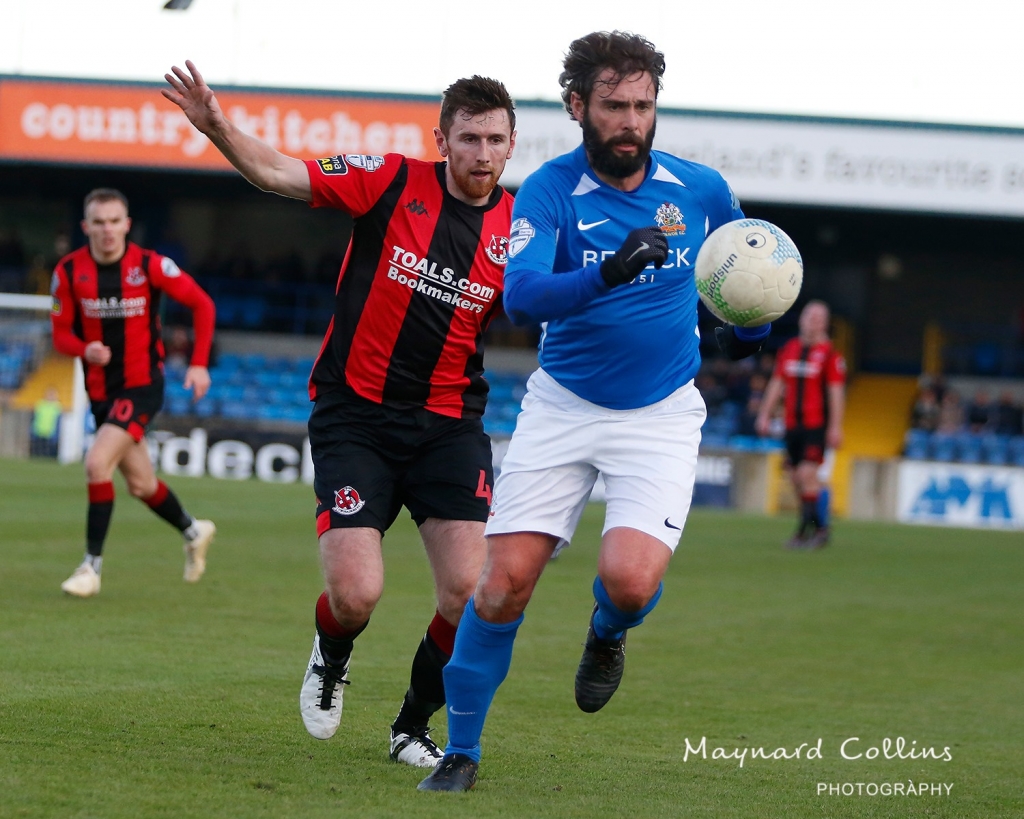 “I’m just delighted for the kid that he’s back even working with the ball because he’s put so many hours and hard work into his recovery and his rehabilitation. It makes you happy to see a young lad who’s worked so hard to get back. Everybody around the club thinks a lot of Robbie so we’re happy to see him coming along nicely and, you never know, he might get a couple of runouts in the Reserves before the end of the season. Hopefully he’ll get a good pre-season and come back stronger and he’s still got time on his side,” Gary said.