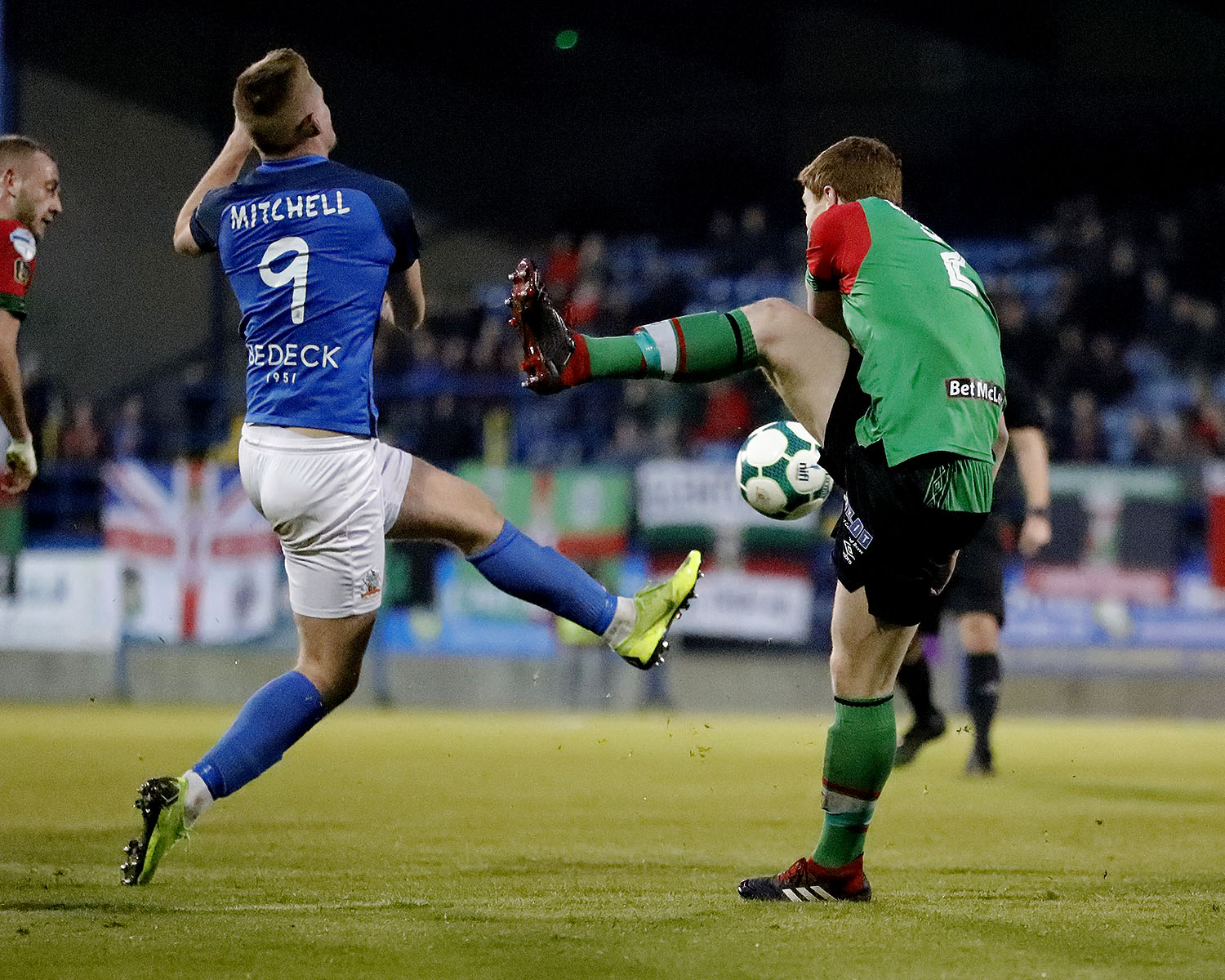 Glenavon’s hopes of playing European football next season were ended on Tuesday night as they were beaten 4 – 2 by Glentoran in the Europa League Play-offs semi-final at Mourneview Park.

The impressive Darren Murray opened the scoring for the Glens in the 27th minute when he glanced home a header from a Curtis Allen cross.

Caolan Marron equalised with a brilliant low shot from distance which found the bottom corner in first-half injury time, but the visitors restored their lead just two minutes into the second half through a stunning strike from Allen.

Andrew Mitchell responded for Glenavon with a thunderous free-kick in the 54th minute, but the Lurgan Blues were level for less than a minute, as Robbie McDaid took advantage of a Robert Garrett error to round Jonathan Tuffey and restore Glentoran’s lead.

The Glens wrapped up their victory on 76 minutes when Murray grabbed his second of the night by sprinting clear of Seamus Sharkey and scoring with a deft finish to make sure of his side’s place in Saturday’s final.

Both sides struggled to really settle in the opening stages of the game, but the first half-chance came Glenavon’s way in the seventh minute when Josh Daniels sent a cross over from the left. Stephen Murray was unable to connect properly with his header and the ball went harmlessly wide.

At the other end Murray got his head to the ball to make an important clearance from a Christopher Gallagher corner five minutes later.

Daniels then almost sent Murray through on goal on 21 minutes, but his through-ball over the top had just too much pace on it and Dwayne Nelson gathered. From the resulting counter-attack Gallagher had a pop at goal with a volley that was blocked. 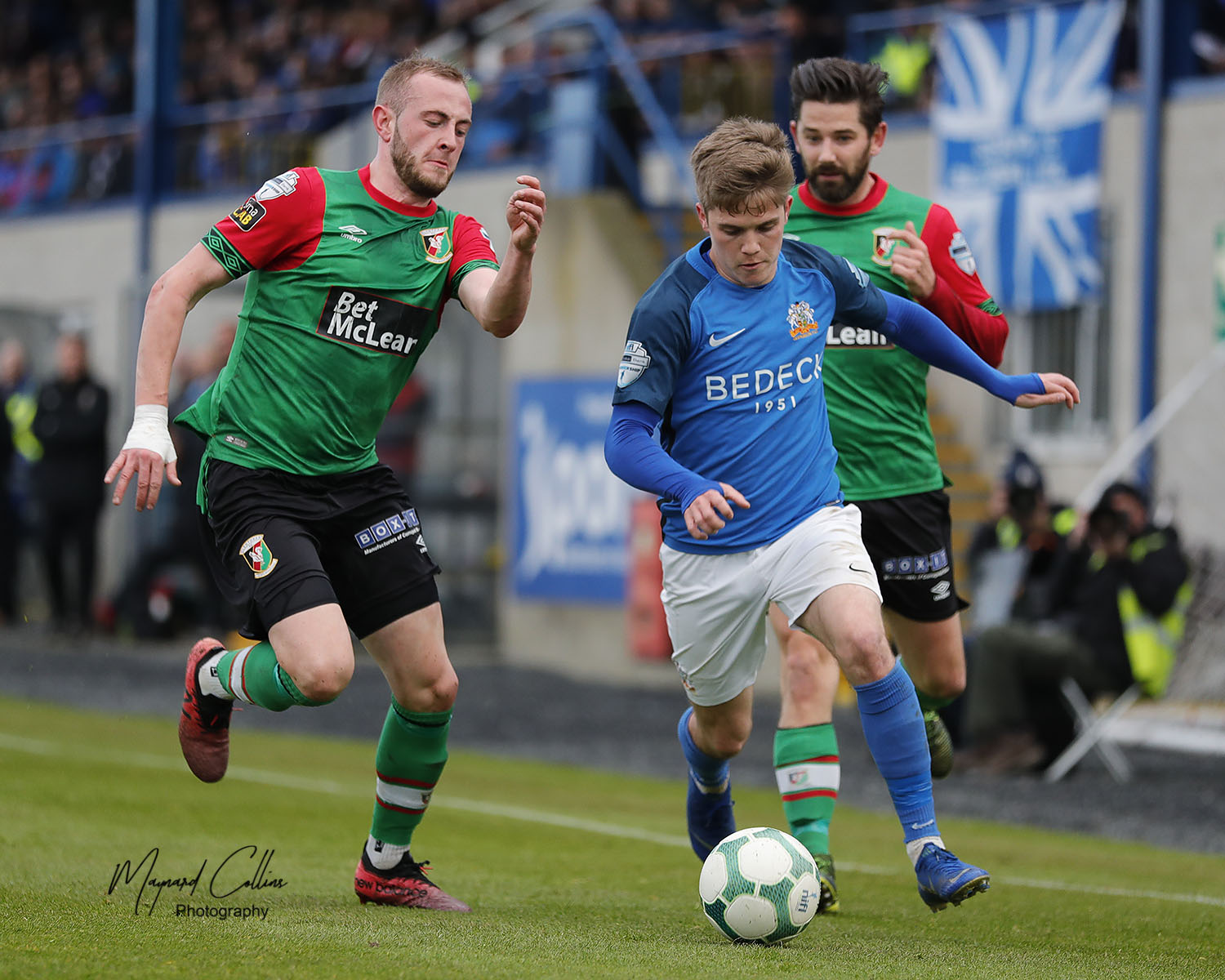 The opening goal arrived in the 27th minute. Gallagher fed the ball wide to Allen on the right. The striker made space for a cross and curled the ball into the penalty area with his left foot. Darren Murray rose in front of Marron and glanced a brilliant header beyond Tuffey and inside the far post to make it 1 – 0 to the visitors.

On 35 minutes James Singleton mishit a free-kick, but Garrett did well to flick the ball into the Glentoran penalty area, where it eventually fell for Stephen Murray. The striker’s curling effort with his right foot went wide of the far post.

Five minutes later Mitchell had a shot at goal from a free-kick that was all of 30 yards out. The ball went narrowly over the crossbar, but Nelson had it covered anyway.

Glenavon’s equaliser in first-half stoppage time came from an unlikely source. When Conor McCloskey’s free-kick from the left wing was headed clear by the Glentoran defence it looked like the danger had gone, but the ball fell for Marron 30 yards out and he struck a brilliant low shot with his right foot which arrowed into the far bottom corner to ensure that it was honours even at the break. 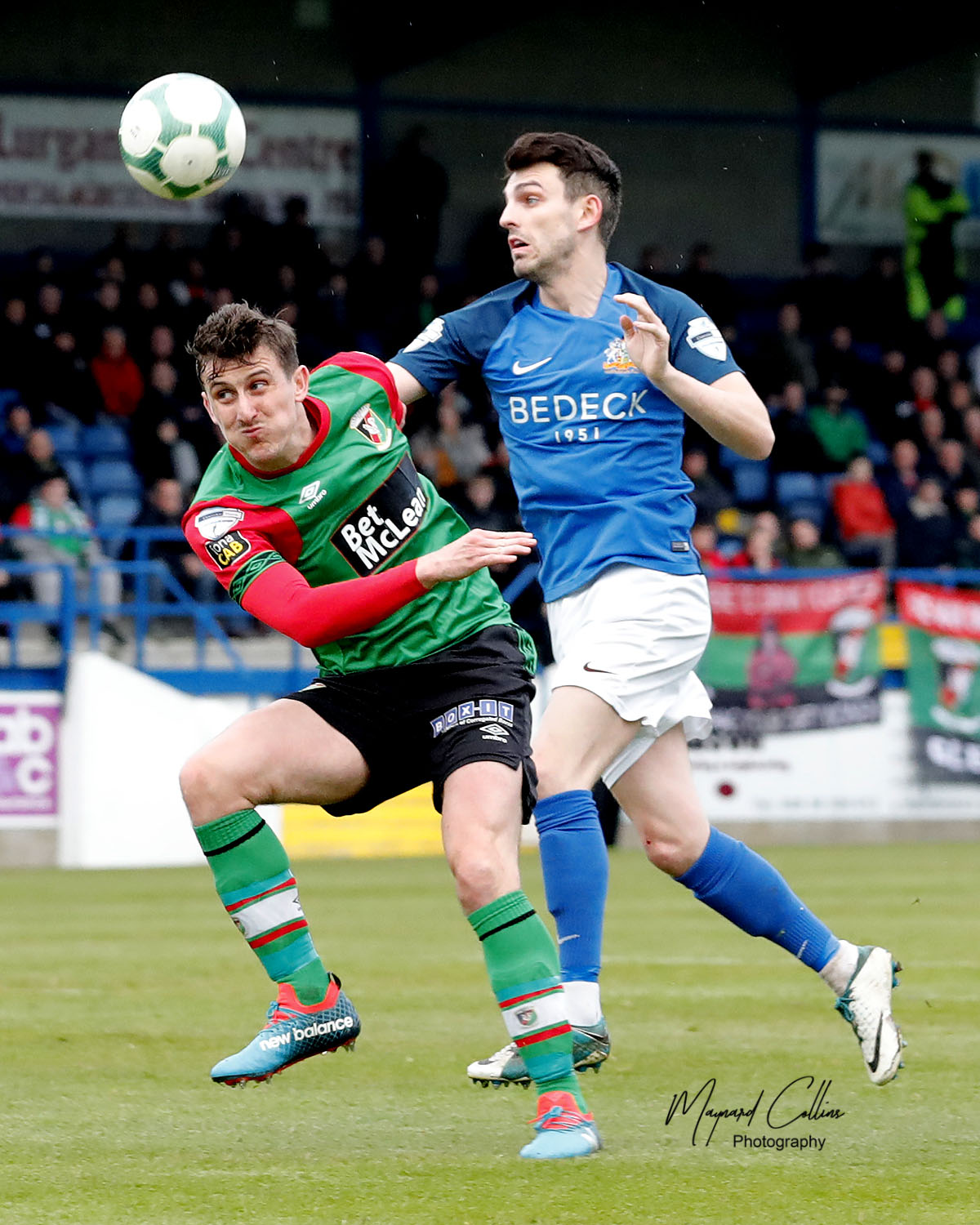 The Glens regained their lead just two minutes into the second period. Captain Marcus Kane’s long free-kick from close to the halfway line was nodded down by Gavin Peers for Allen. Afterwards Glenavon players protested that the striker had controlled the ball with his arm but referee Lee Tavinder wasn’t interested, and Allen lashed a brilliant half-volley in off the crossbar with his left foot from 18 yards.

Allen inadvertently had a hand in Glenavon’s second equaliser seven minutes later. He won a tackle against Eoin Wearen in the centre circle but succeeded only in sending the ball back towards his own goal and Stephen Murray raced on to it. When Peers fouled Murray with a last-ditch tackle just outside the penalty area many Glenavon supporters expected to see a red card produced, but Tavinder flashed yellow instead. From the resulting free-kick Mitchell blasted an unstoppable shot past Nelson with his left foot to make it 2 – 2.

However, the Lurgan Blues were to be on level terms for less than 60 seconds. Straight from the restart Glentoran pressed towards the Glenavon goal, and when Garrett’s scuffed back-pass fell short of Tuffey, former Glenavon man McDaid seized the opportunity, latching on to the loose ball and rounding the stranded goalkeeper before rolling into an empty net.

The visitors thought they had grabbed a fourth goal in the 64th minute when Peers stabbed in at the back post following a Gallagher corner, but Tavinder ruled the effort out for a foul on Tuffey.

It wasn’t to be long before a fourth Glentoran goal did arrive, however. When Marron tried to play the ball up to the edge of the Glentoran penalty area in the 76th minute it was cut out by Allen. His volleyed clearance went straight to the feet of Darren Murray on the halfway line. The striker produced a brilliant first touch to spin past Sharkey before racing clear, carrying the ball all the way into the Glenavon penalty area and coolly dinking it beyond Tuffey and into the left-hand corner to wrap up the victory and secure the Glens place in Saturday’s play-off final. 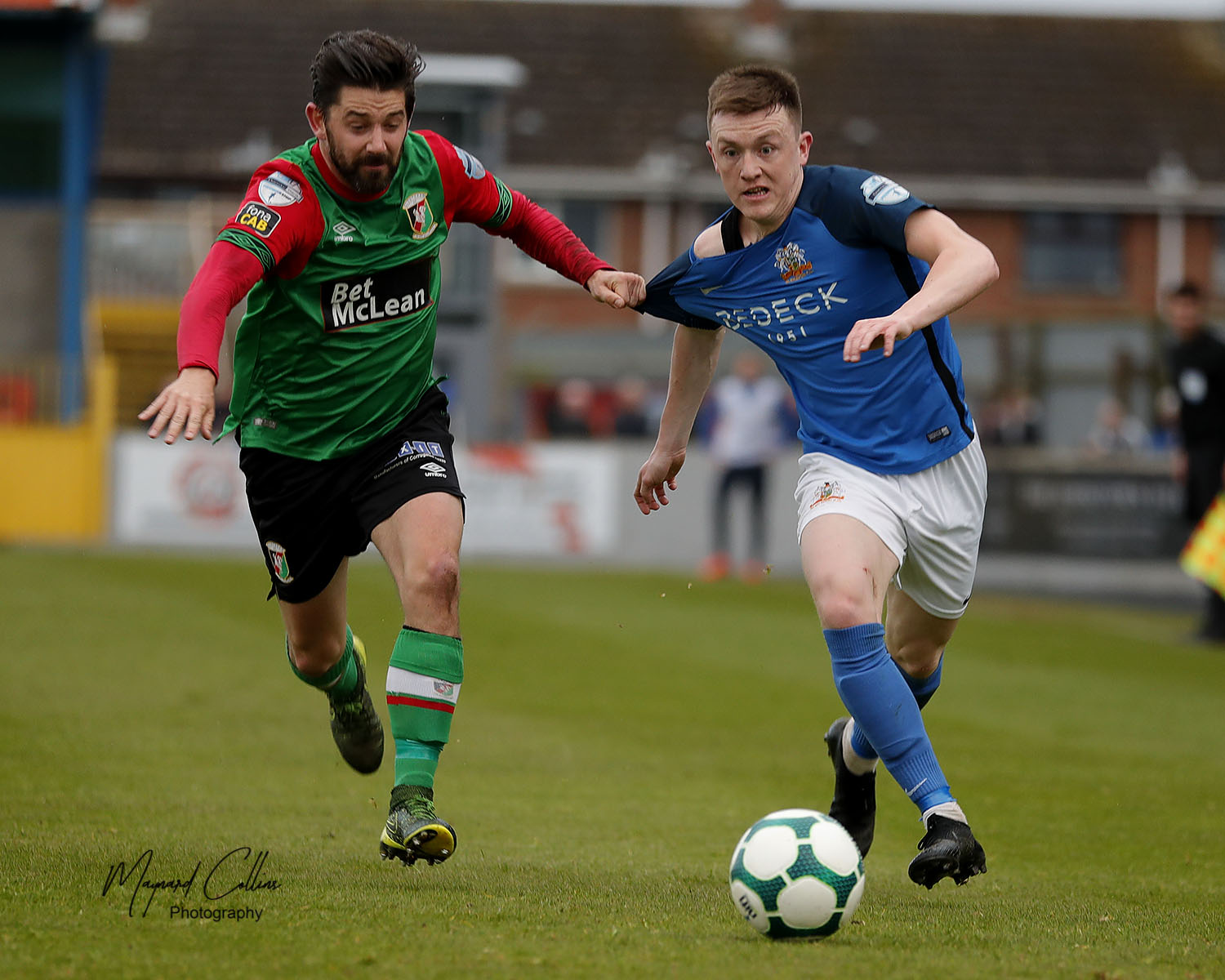