Glenavon produced a vintage performance on Saturday to put a dampener on Linfield’s title party, defeating the newly crowned champions 4 – 0 at the National Football Stadium.

Former Linfield midfielder Robert Garrett opened the scoring for the Lurgan Blues in the 9th minute with a brilliant strike from outside the box, before Conor McCloskey doubled that lead on 38 minutes with an equally stunning goal.

Eoin Wearen scored his first goal for Glenavon just after the hour mark to make it 3 – 0, while Rhys Marshall rounded off the scoring by adding a fourth on 76 minutes to cap a memorable victory for the Lurgan Blues.

The hosts probably just shaded the opening few minutes of the match, and Stephen Fallon was allowed to turn and drive towards goal in the fifth minute. The midfielder’s subsequent low shot went narrowly wide of Jonathan Tuffey’s right-hand post.

It was the visitors who opened the scoring, however, in the ninth minute. After an excellent spell of possession from Glenavon, Andrew Mitchell played the ball back for Garrett, who was midway inside the Linfield half. The midfielder then played a one-two with Josh Daniels before proceeding to score with a brilliant strike from 25 yards out which flew into the left-hand corner, leaving Gareth Deane rooted to the spot in the Linfield goal. 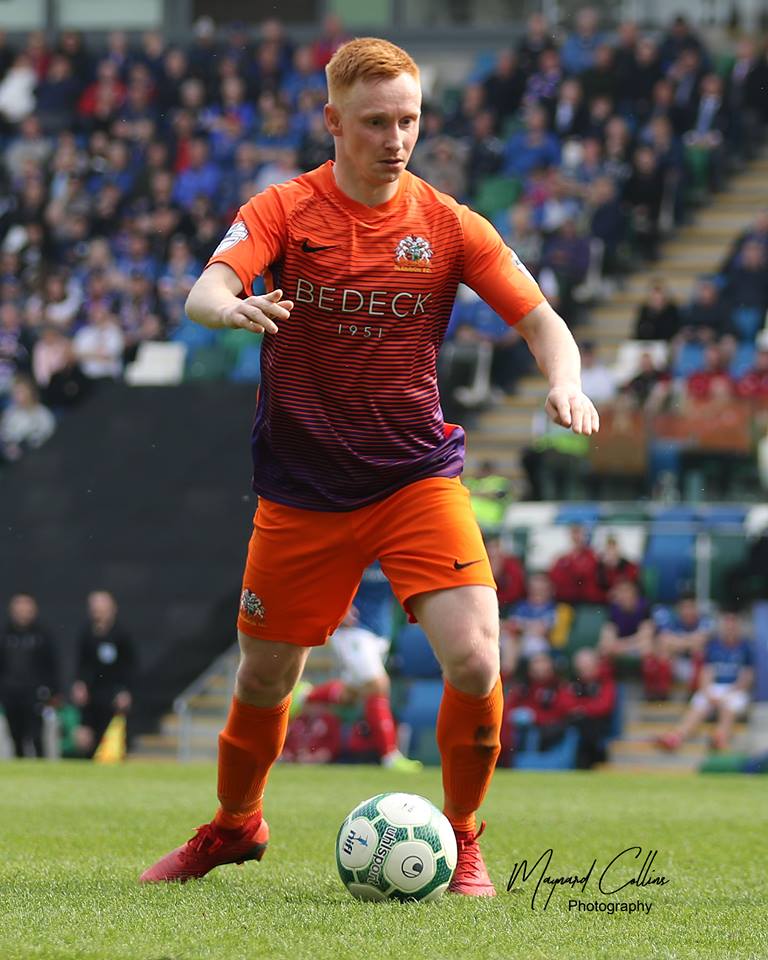 Four minutes later Kirk Millar tried to hit back for the Blues, but his shot with the outside of his right foot went just wide of Tuffey’s right-hand post.

On 18 minutes Daniels cut in from the left flank and had a pop at goal, but his shot was straight at Deane.

The home side missed a golden opportunity to equalise a minute later. Millar’s corner from the left went all the way through to Marek Cervenka at the far post. The big striker somehow managed to send the ball over the bar from just a few yards out when it looked easier to score.

Cervenka might have had another chance in the 33rd minute, but he failed to read a ball across goal from strike partner Andrew Waterworth and the opportunity was lost.

It was Glenavon who struck again to double their lead on 38 minutes. Garrett clipped a ball into the feet of Mitchell just outside the Linfield penalty area. With his back to goal and Mark Stafford pressuring him, the Glenavon striker did well to hold the ball up before feeding it into the path of the advancing McCloskey. The winger rifled his effort into the far top corner with his left foot to make it 2 – 0. 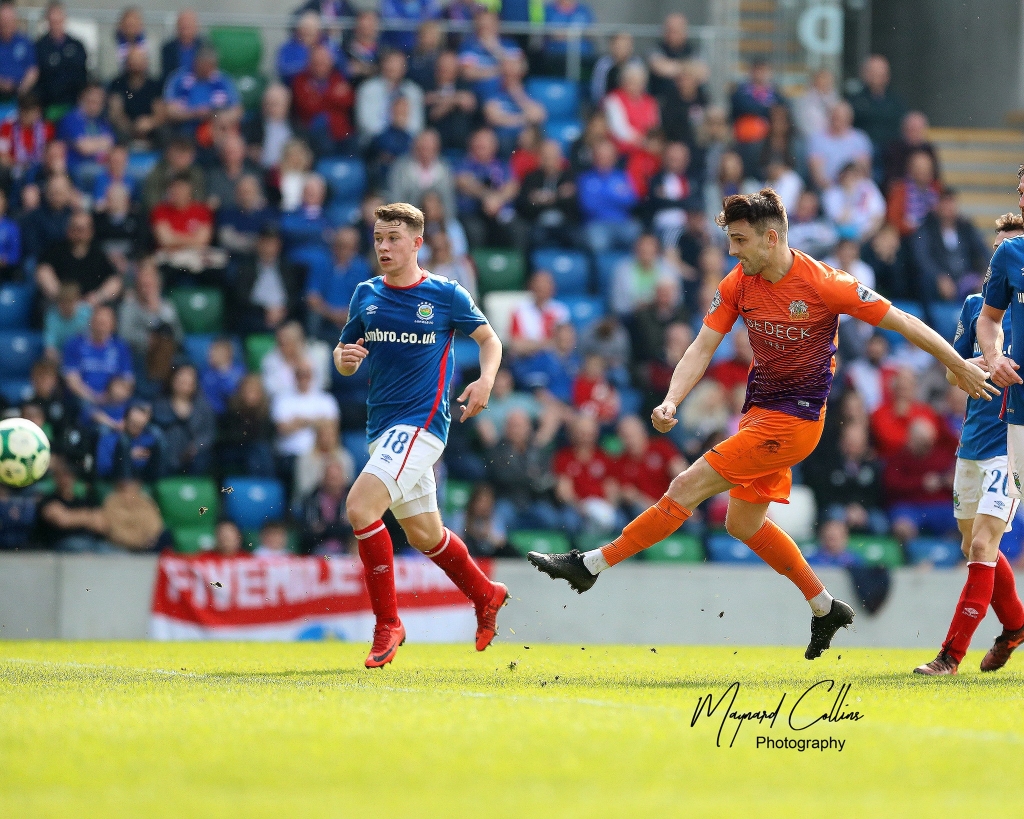 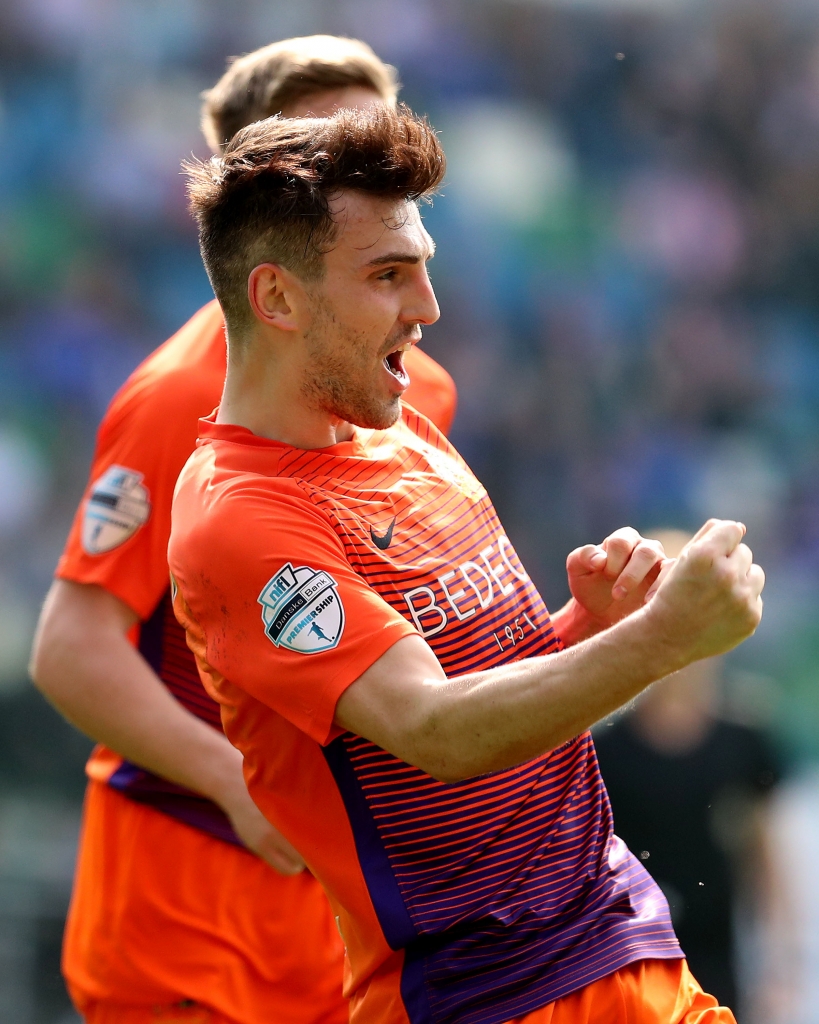 Two minutes later the Lurgan Blues were very unfortunate not to find themselves 3 – 0 ahead. Linfield failed to clear a McCloskey corner and the ball found its way to Daniels. The winger struck a beautiful curling effort from just outside the penalty area which hit the crossbar. Stephen Murray latched on to the rebound and drilled a low shot goalwards, but Deane did well to get down and make the save right on the goal-line.

Glenavon started the second half in much the same way as they had ended the first, on the front foot and in search of goals. McCloskey led a counter-attack on 53 minutes and found Daniels. He in turn played the ball to Mitchell on the left-hand side of the Linfield box. The striker fizzed his shot across the face of goal.

It wasn’t to be long before the third goal arrived. Marshall’s throw-in on the right flank found Murray, who quickly returned the ball to the right-back. Marshall then played it infield to Wearen. The midfielder battled his way past Fallon before easily rounding Ryan McGivern and firing the ball in at the near post with his right foot from a tight angle to score his first goal for Glenavon. 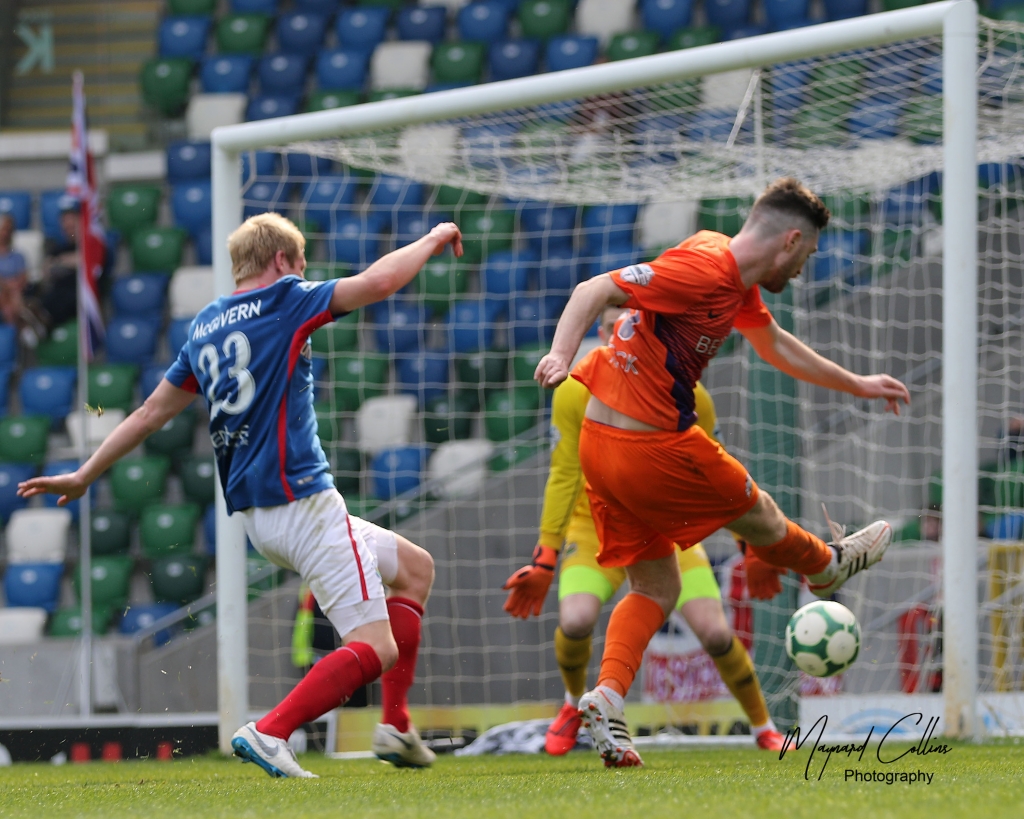 Linfield boss David Healy introduced substitutes Michael O’Connor, Jamie Mulgrew and Jordan Stewart in a futile effort to get his side back into the game. Stewart had a low shot on 66 minutes which went wide of the left-hand post.

It was Glenavon who added to their haul eight minutes later. Mitchell took a corner from the right and the impressive Seamus Sharkey rose highest to nod the ball goalwards. When Linfield failed to clear the ball it fell for Marshall and he had the simple task of converting from three yards to make it 4 – 0.

The visiting fans began to chant for a fifth goal, and it nearly arrived ten minutes from time when Murray’s cross-cum-shot went just past the head of substitute Jordan Jenkins. 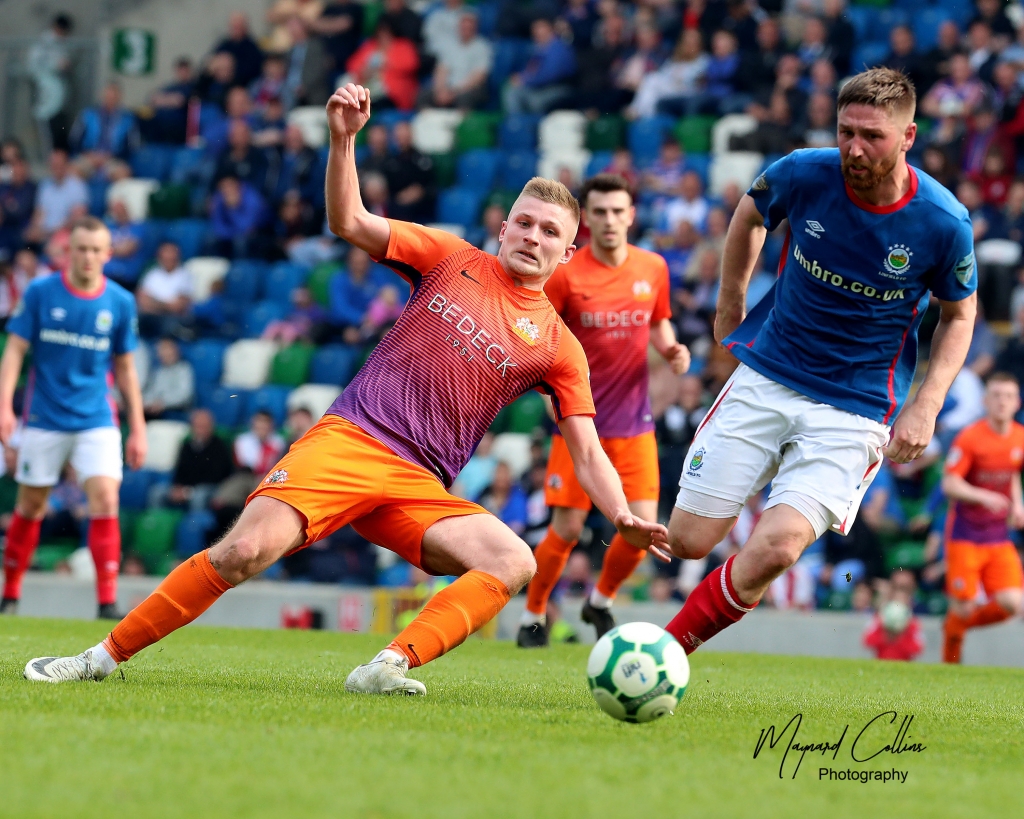 The Glenavon supporters had to settle for four goals, but this was still enough to inflict the heaviest domestic defeat on Linfield in nearly a decade.

It’s a result which sees the Lurgan Blues leapfrog Crusaders into third place in the Danske Bank Premiership table.

On Tuesday night (23rd April) Glenavon travel to second-placed Ballymena United (kick-off 7.45pm). Sitting five points behind the Braidmen and with two games remaining, there is still an outside chance that Gary Hamilton’s men could nick second spot and secure automatic European qualification.