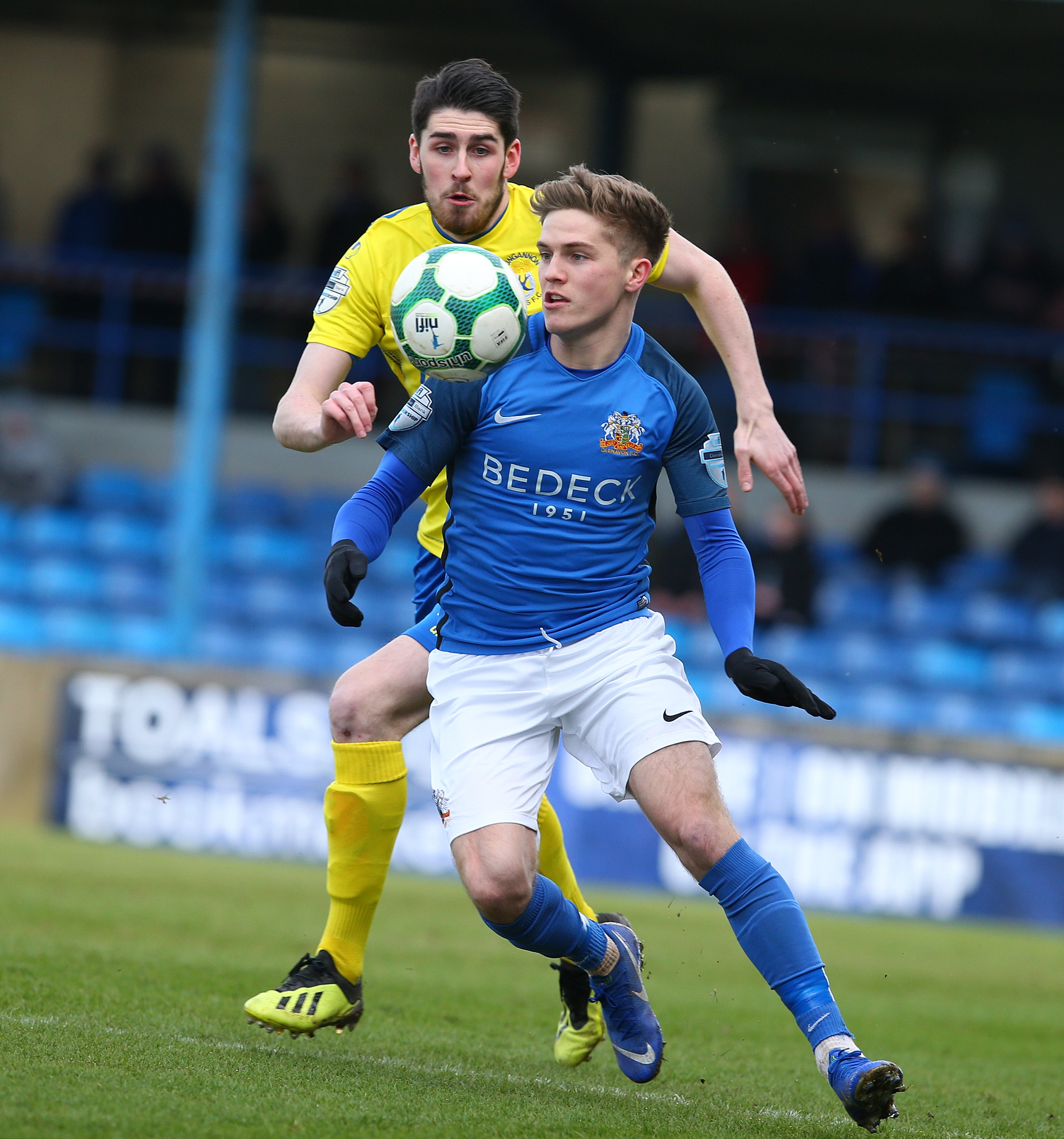 Josh Daniels scored his third goal in four games to earn a 1 – 0 win for Glenavon over a dogged Dungannon Swifts at Mourneview Park on Saturday afternoon.

Daniels’ shot in the 70th minute took a deflection off Kris Lowe which sent it past Swifts goalkeeper Evan Moran and into the bottom corner, ensuring Glenavon picked up a second successive home win and another precious three points.

In a quiet start to the game the best piece of play in the opening exchanges came courtesy of Glenavon defender Caolan Marron. The young centre-half made an excellent interception before setting off on a charging run down the right flank and sending a dangerous ball across the penalty area. Unfortunately for Glenavon nobody in a blue shirt could get on the end of the cross.

In the 25th minute Conor McCloskey received a throw-in from Rhys Marshall on the right, then turned inside his man and hit a low shot at goal with his left foot, but Moran made a comfortable save. 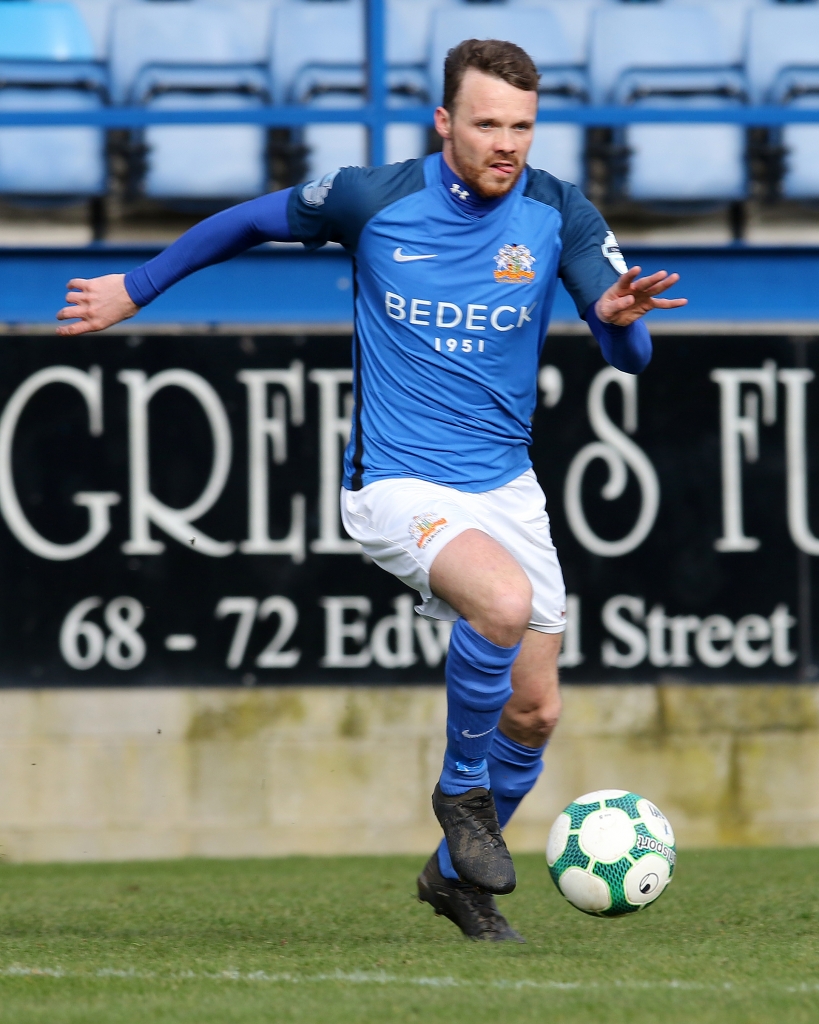 Two minutes later Daniels produced a superb first touch to bring a high ball under control before dribbling towards goal. Lowe made a great tackle to deny Daniels a shooting chance. The loose ball broke for Andrew Hall, but he screwed his right-footed effort well wide of the net.

On the half-hour mark former Lurgan Blues winger Mark Patton picked out Daniel Hughes with a cross from the left. The Dungannon striker’s flicked effort hit the side-netting.

Marshall and Hall played a neat one-two at the other end a minute later which sent the former surging into the Swifts penalty area, but his low cross was well cut out by Dungannon captain Chris Hegarty.

In the 39th minute Seanan Clucas cleverly dummied James Singleton to create space for a shot, but he could only send his effort over the crossbar. 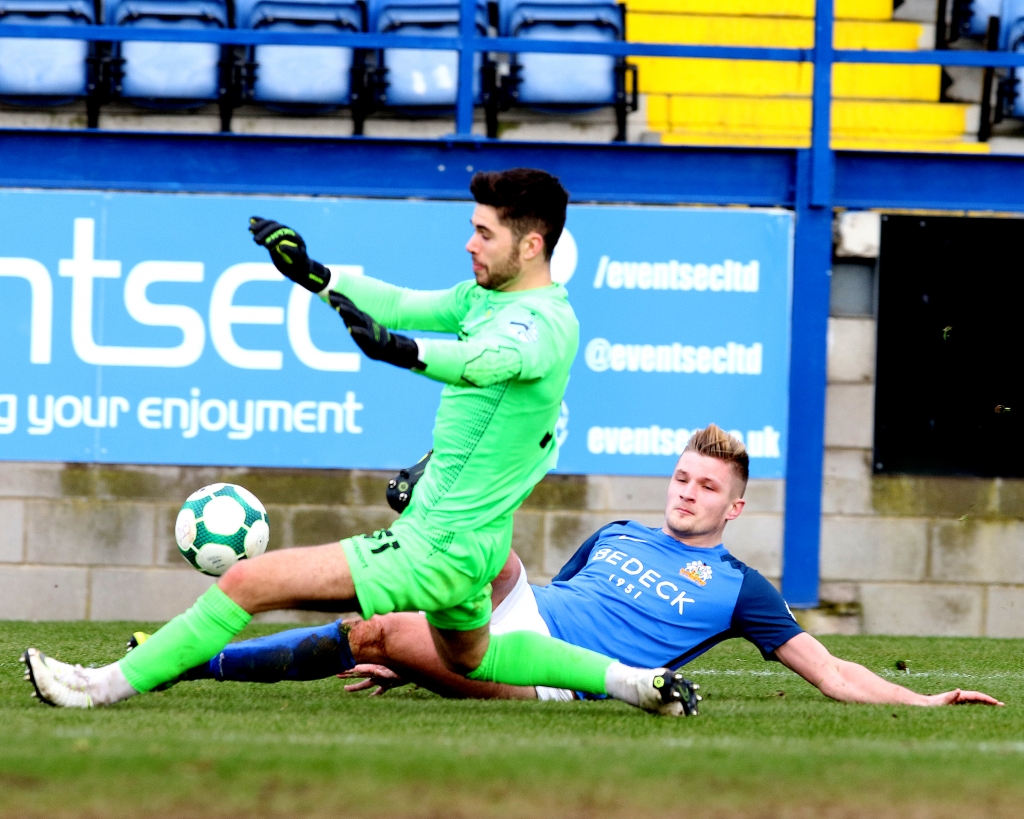 Andrew Mitchell found himself clear on the right a minute later, but Moran did very well to deny the Glenavon striker, racing off his line and narrowing the angle before making the save.

The home side had a let-off in the final minute of the first half when Hegarty got his head on the end of a Hughes free-kick. The defender’s header struck the crossbar and went over, with Jonathan Tuffey beaten.

Mitchell had a low effort from distance in the 57th minute which didn’t trouble Moran, while the best opportunity of the game up to that point arrived a minute later. Good build-up play on the right involving Marshall, Hall and Aaron Harmon released substitute Robert Garrett. The midfielder dragged his shot wide of the far post, however, whilst under pressure from David Armstrong. 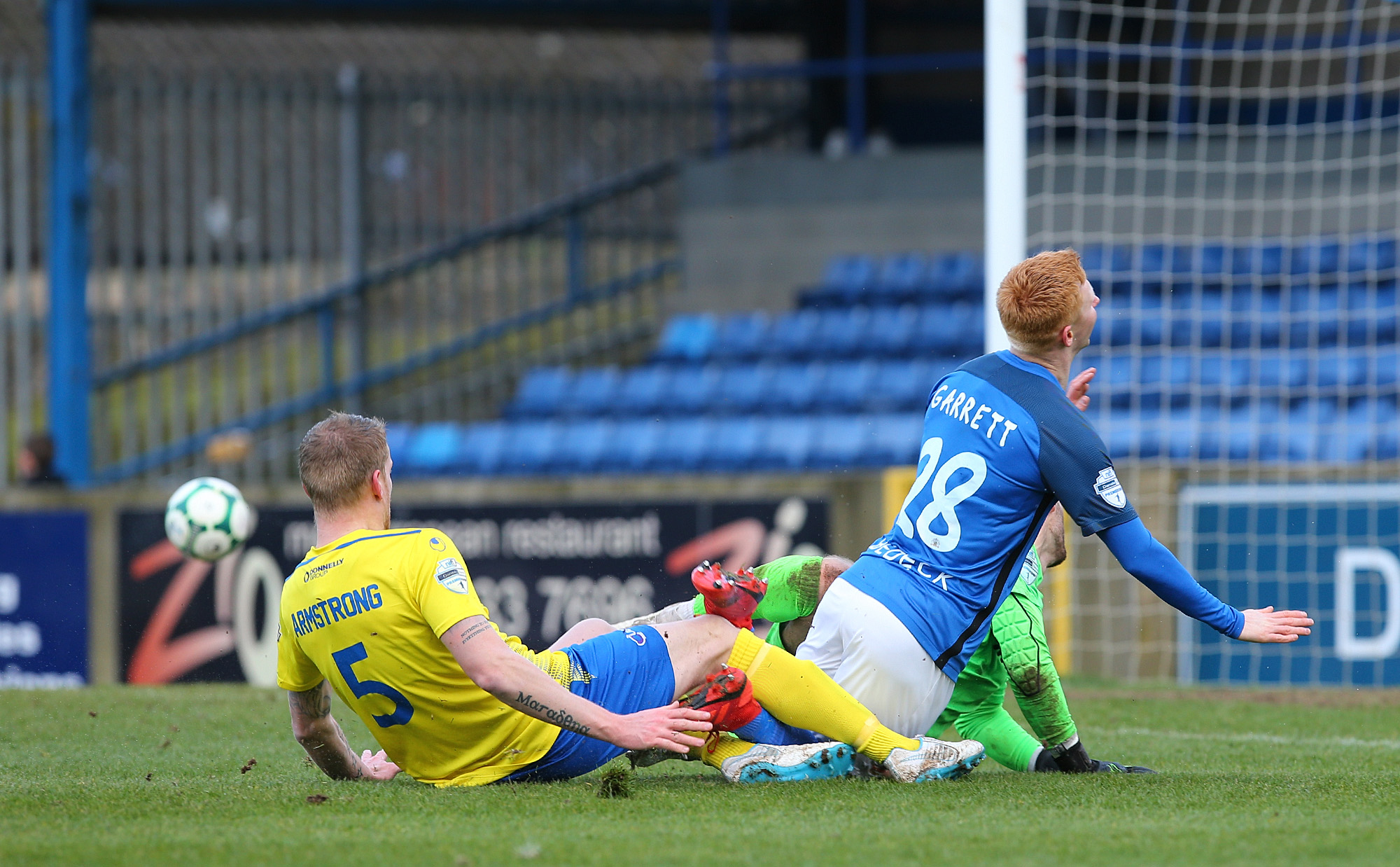 Hughes attempted an audacious chip in the 60th minute, but Tuffey read it easily and made a routine save.

Seconds later at the other end of the pitch, McCloskey struck a powerful shot from distance which moved in the air. Moran managed to gather the ball at the second attempt.

Hall had a pop at goal from a free-kick in a central position in the 62nd minute. His effort was on target but tame, and Moran saved easily.

Daniels displayed his defensive capability two minutes later when he made a last-gasp tackle in his own penalty area on Lowe just as the Dungannon full-back was about to pull the trigger.

The Swifts had a decent opportunity to open the scoring on 68 minutes when Hughes’ free-kick picked out Johnny Lafferty, but the substitute’s header went over the bar and landed on top of the net. 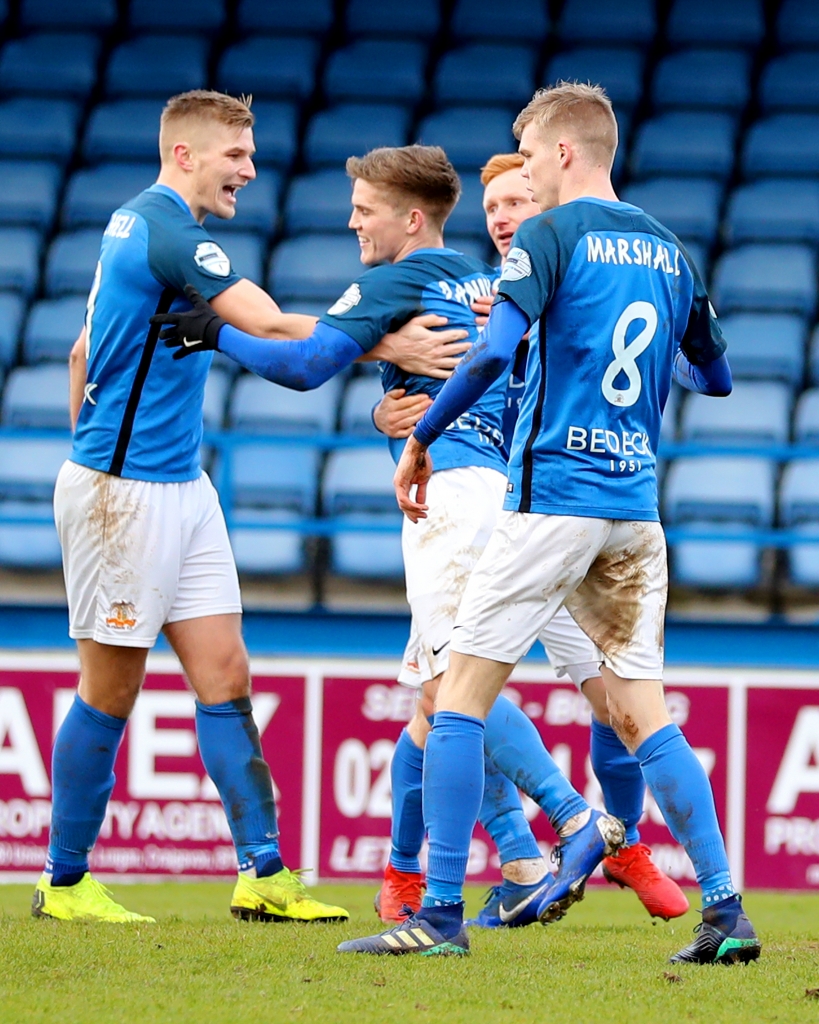 As it turned out, it was Daniels who broke the deadlock at the other end a minute later. Marshall fed the ball to the feet of Mitchell in the penalty area. With his back to goal the striker held the ball up before laying it off to Daniels on the edge of the box. The winger took one touch to set himself, then sent a low shot with his right foot towards the far corner. The ball deflected off the boot of Lowe, however, and was diverted towards the opposite corner, wrong-footing Moran and giving him no chance of keeping it out of the net. 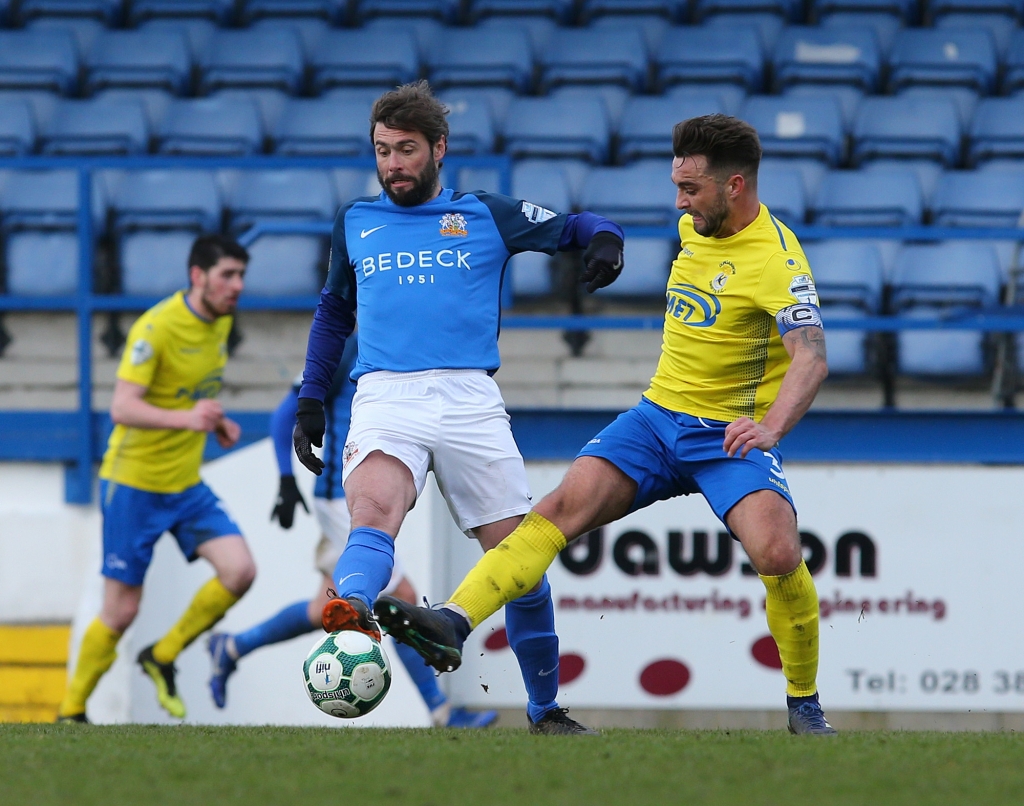 Daniels came close to adding a spectacular second two minutes later when he shot from close to the centre circle. Back-pedalling, Moran managed to get back and make the save, tipping the ball over the bar.

The visitors very nearly equalised in the 74th minute when the unmarked Lafferty sent a point-blank header goalward following a Patton corner. Tuffey made an outstanding save to preserve Glenavon’s lead. 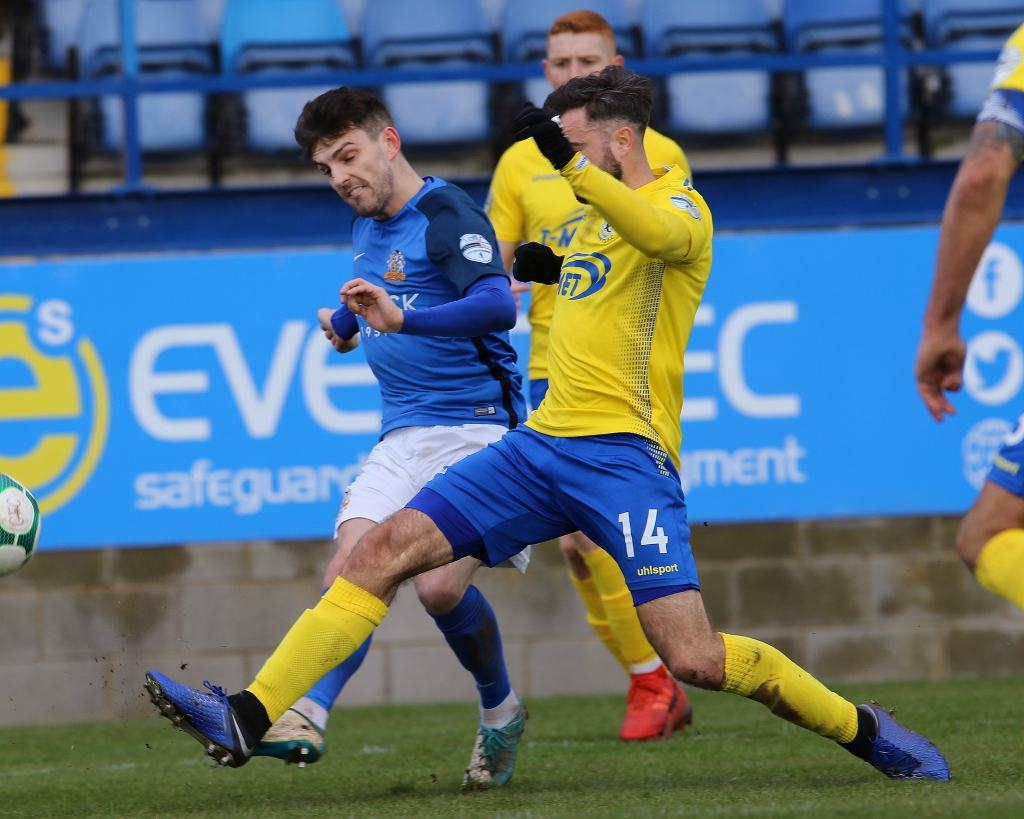 McCloskey came agonisingly close to doubling that lead in the 78th minute. He twisted and turned to beat Alan Teggart and create space for a shot. His right-footed effort towards the far top corner just brushed the crossbar.

Six minutes later Daniels nearly grabbed a second when his low shot went narrowly wide of the far post after he’d been teed up by Mitchell.

Glenavon held on to secure the 1 – 0 victory, a result which keeps them six points clear of both Cliftonville and Coleraine, in fourth place in the Premiership standings.

Next up for the Lurgan Blues is a trip to the Newry Showgrounds on Saturday (March 23rd) to take on Newry City (kick-off 5.30pm) in what is the final fixture before the split.