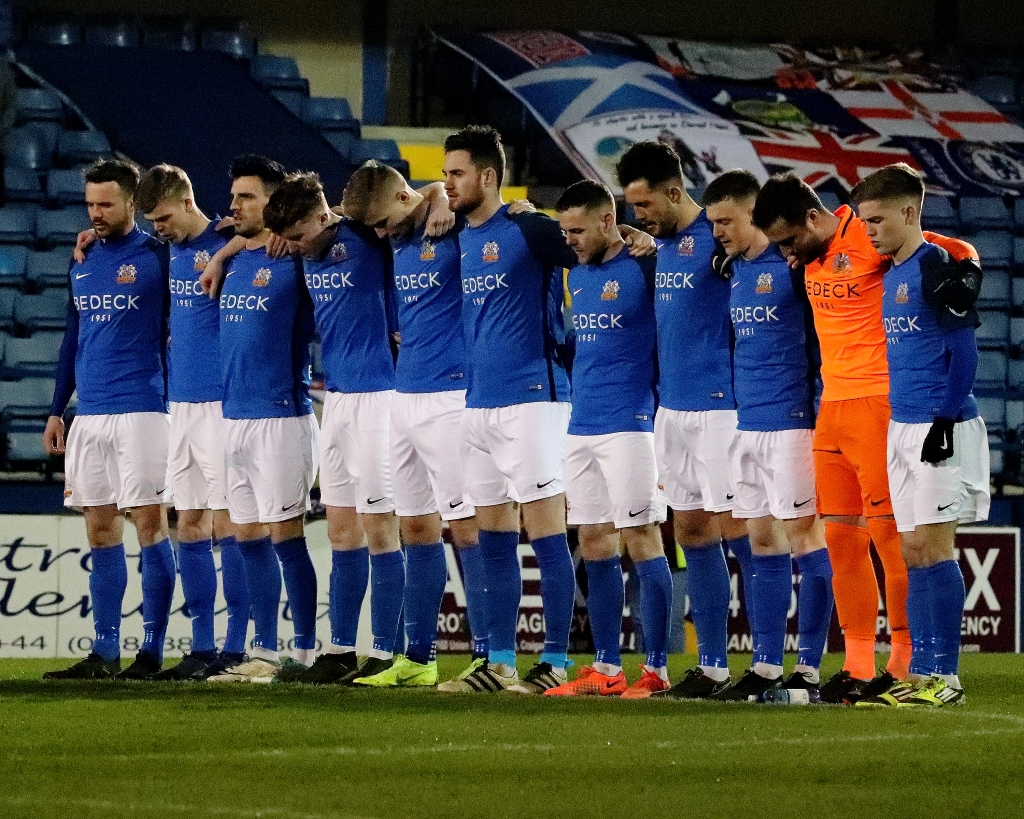 Glenavon stunned Linfield with a 2 – 0 victory over the league leaders at Mourneview Park on Friday night.

In a performance that was a vast improvement over their display against Cliftonville last weekend, second-half goals from Aaron Harmon and Josh Daniels secured the win for the Lurgan Blues, while goalkeeper Jonathan Tuffey turned in a man-of-the-match performance to shut out the Windsor Park men at the other end.

The home side were the first to threaten when Daniels did well to rob Kyle McClean on the left flank in the fourth minute of the match before driving to the by-line and sending in a low cross which found Andrew Hall. The winger’s left foot didn’t connect properly with the ball and his shot went high and wide.

Four minutes later the ball bobbled just as James Singleton went to play a pass back to Tuffey, making it very difficult for the Glenavon goalkeeper to deal with as Linfield attackers closed in. However, he coolly stooped and controlled the ball with his chest before clearing it.

Linfield’s first real effort on goal came in the 14th minute. Glenavon tried to break, but Daniels Kearns nipped in to cut out a Conor McCloskey pass that was intended for Eoin Wearen. The former Glenavon forward fed the ball out right to Jordan Stewart, who struck a well-hit shot which Tuffey did well to keep out at his near post. From the subsequent corner-kick the ball was cleared only as far as Kearns at the edge of the penalty area. Once again Tuffey was equal to the shot.

Fifteen minutes in, Caolan Marron made an excellent run all the way from just outside his own penalty area into the Linfield half before playing the ball out to Daniels on the left flank. The winger got a shot away with his left foot but he couldn’t find the target. 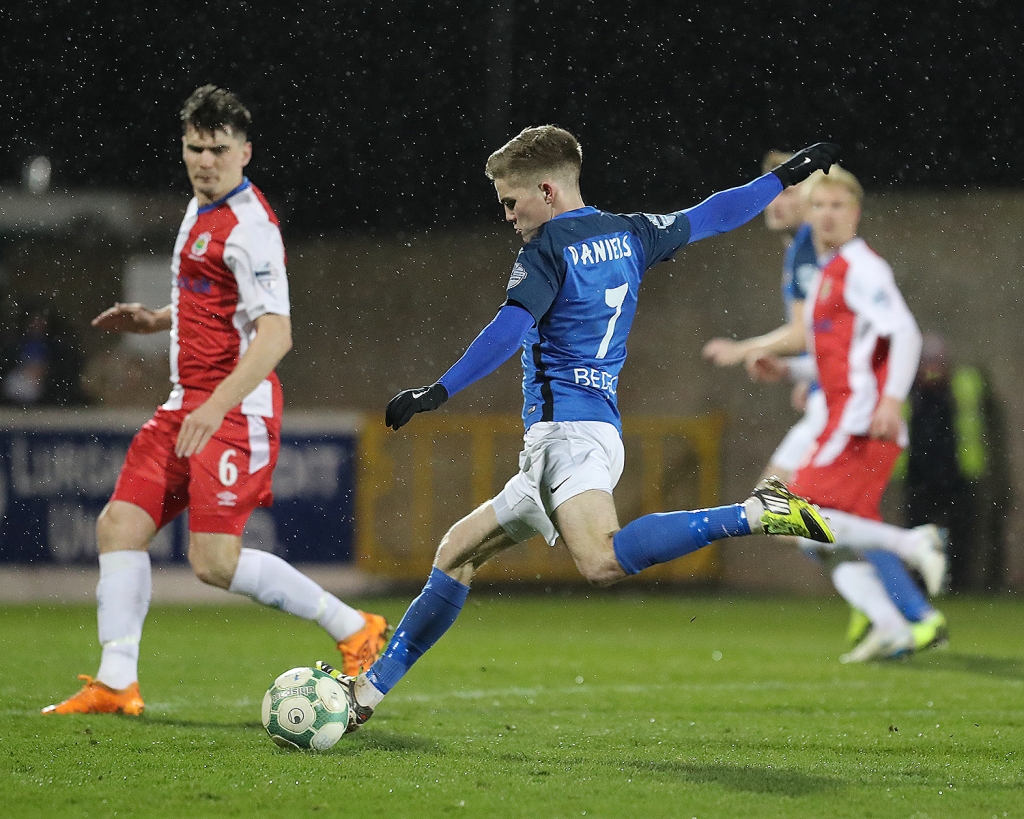 Daniels had another effort at goal three minutes later when he picked up a loose ball and drove towards the Linfield box. His low shot, this time struck with his right foot, took a slight deflection off Jimmy Callacher and went behind for a corner.

Niall Quinn whipped over a Linfield corner from the right on 21 minutes which found the head of Waterworth. The striker’s effort hit the target but Tuffey made a comfortable save.

The Glenavon goalkeeper displayed tremendous bravery 10 minutes later when he dived to just get his hand to the ball ahead of McClean after Quinn had whipped in a dangerous cross from the left flank.

On 36 minutes a Singleton throw-in was headed down by Harmon to tee up McCloskey. The Glenavon forward had a pop at goal with a well-struck volley but Gareth Deane got his body behind it to make the save. 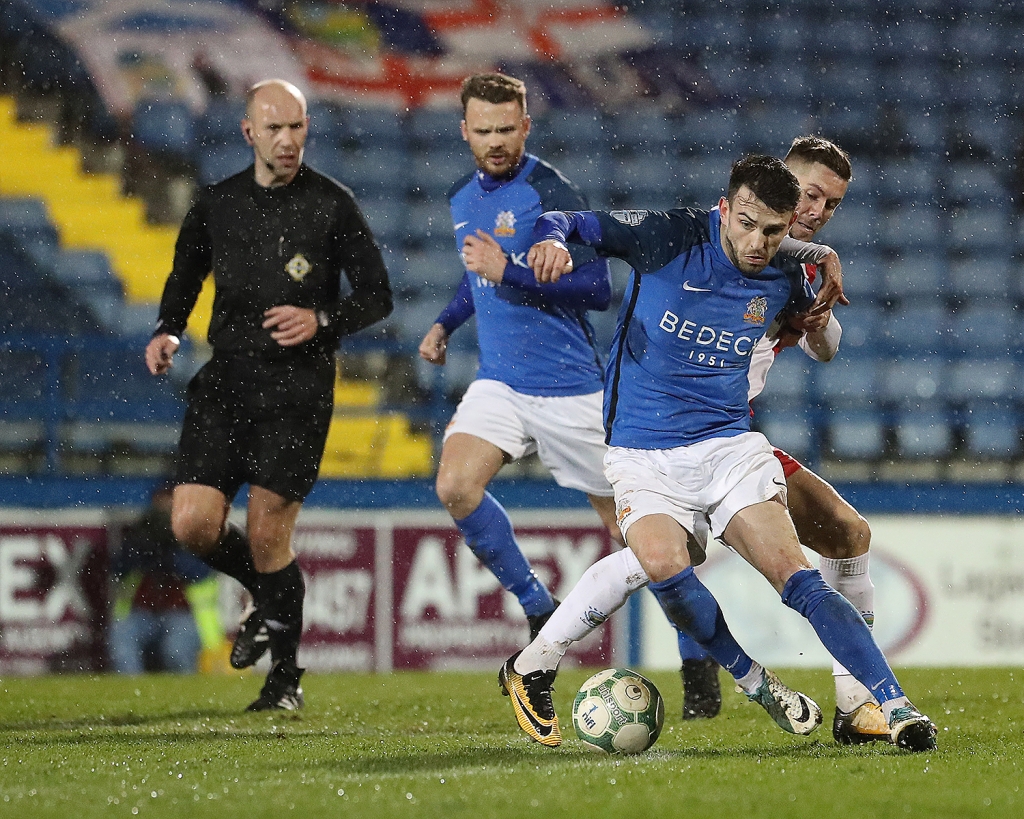 Linfield were awarded a free-kick in a threatening position a minute later, just outside the right-hand side of the Glenavon box. Quinn fizzed a dangerous low ball through a crowd of bodies and Tuffey did exceptionally well to stop it from going all the way into the net.

The Glenavon stopper produced an arguably even better save five minutes later when he dived down to his right to stop a fierce McClean shot after Kearns had found his teammate in the penalty area.

Tuffey was called into action again in the dying moments of the first half when he saved from a Chris Casement free-kick.

Linfield had looked the stronger side as the first half wore on, but they were stunned in the second minute of the second period when Harmon produced a brilliant strike to give Glenavon the lead. When Linfield failed to clear a long ball which Marron played forward, Harmon latched on to it and his swerving left-footed shot from outside the box found the far corner. Deane got the faintest of touches on the ball, but he couldn’t keep it out. 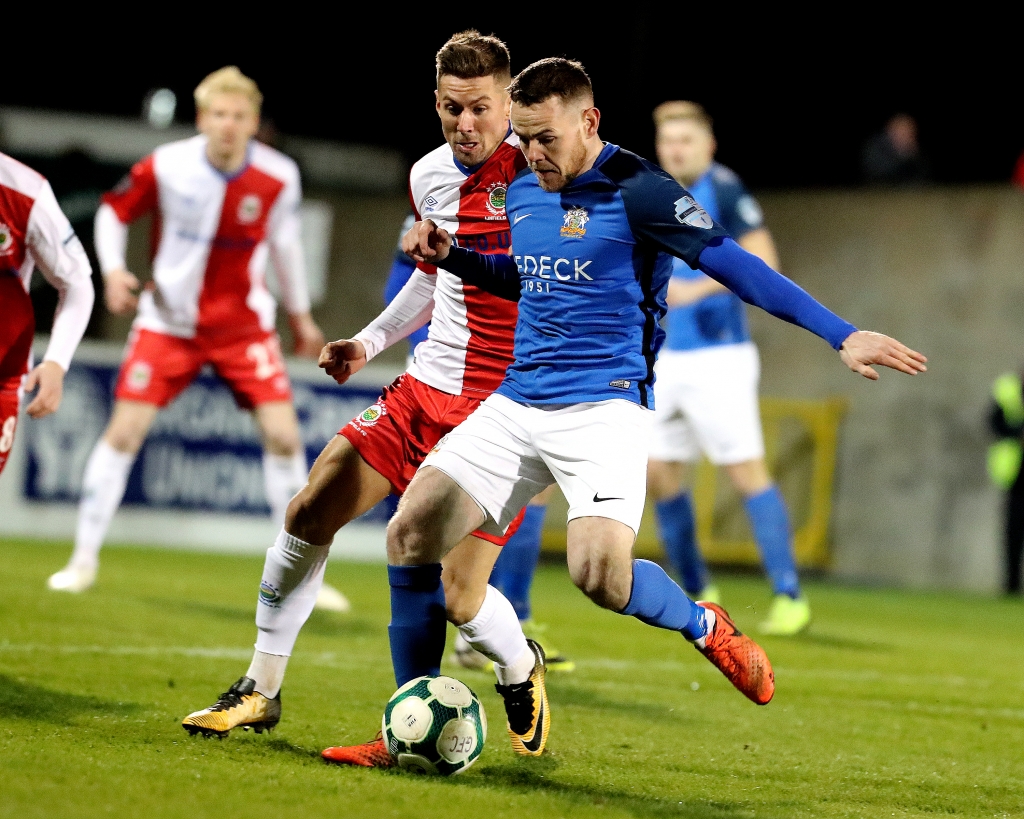 The visitors tried to hit back soon after. Josh Robinson cut out a James Singleton throw-in with his head in the 51st minute and McClean then played the ball wide to Stewart on the right. He tried to find Waterworth with a low cross, but Marron got his foot to the ball to cut it out. However, the Glenavon defender deflected the ball towards his own goal, and Tuffey again had to be alert to keep it out.

Tuffey’s best save of the match came in the 62nd minute. A long ball forward from Deane was flicked on by the head of Waterworth. Kearns then played a ball over the top for Chris Casement to run on to. The defender met it just inside the Glenavon box and hit a sweetly struck shot with his right foot which looked certain to nestle in the far corner until Tuffey dived to his right and palmed the ball away to safety.

A minute later Callacher got his head to a Quinn free-kick. The Linfield defender, who has scored no fewer than nine goals this season, will be disappointed that he couldn’t hit the target. 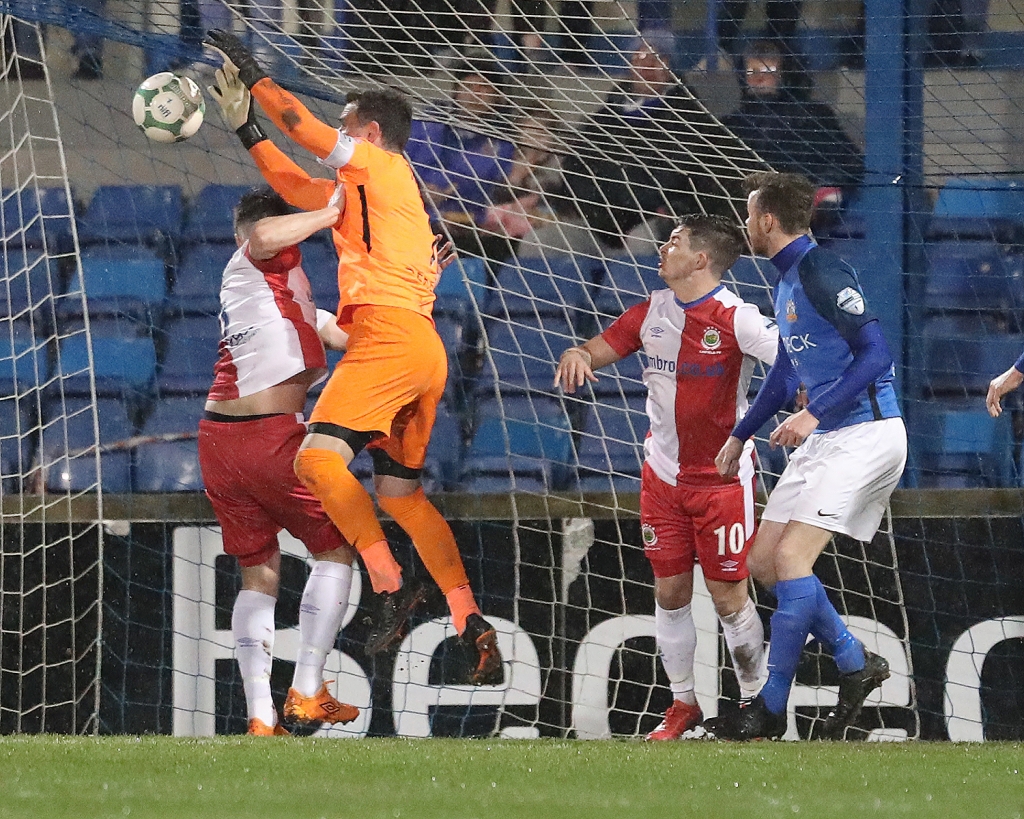 The home side had a real let-off in the 70th minute when they failed to clear a long Ryan McGivern free-kick. Waterworth took advantage by getting in a low shot with his right foot which struck the base of Tuffey’s left-hand post.

Linfield had another golden opportunity to equalise 10 minutes later when Waterworth’s flicked header sent substitute Marek Cervenka clean through on goal. That man Tuffey produced yet another save to preserve the home side’s lead, this time keeping the ball out of the net with his feet.

Glenavon took full advantage, doubling their lead and killing the game off in the 86th minute. Marshall played a long hopeful ball forward from the halfway line and Robinson misread the bounce terribly, getting under the ball and allowing it to fall into the path of Daniels. The Glenavon winger calmly slotted past Deane and into the Linfield net to wrap up the three points for the Lurgan Blues, ending a run of 10 straight league wins for David Healey’s side in the process. 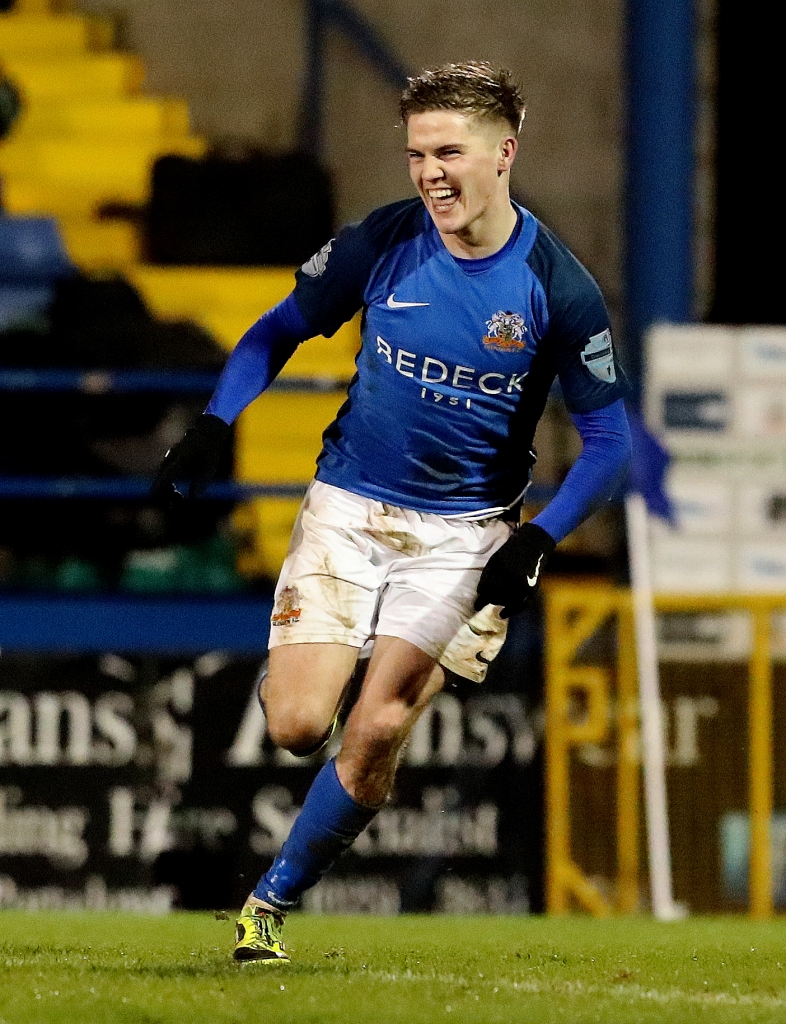 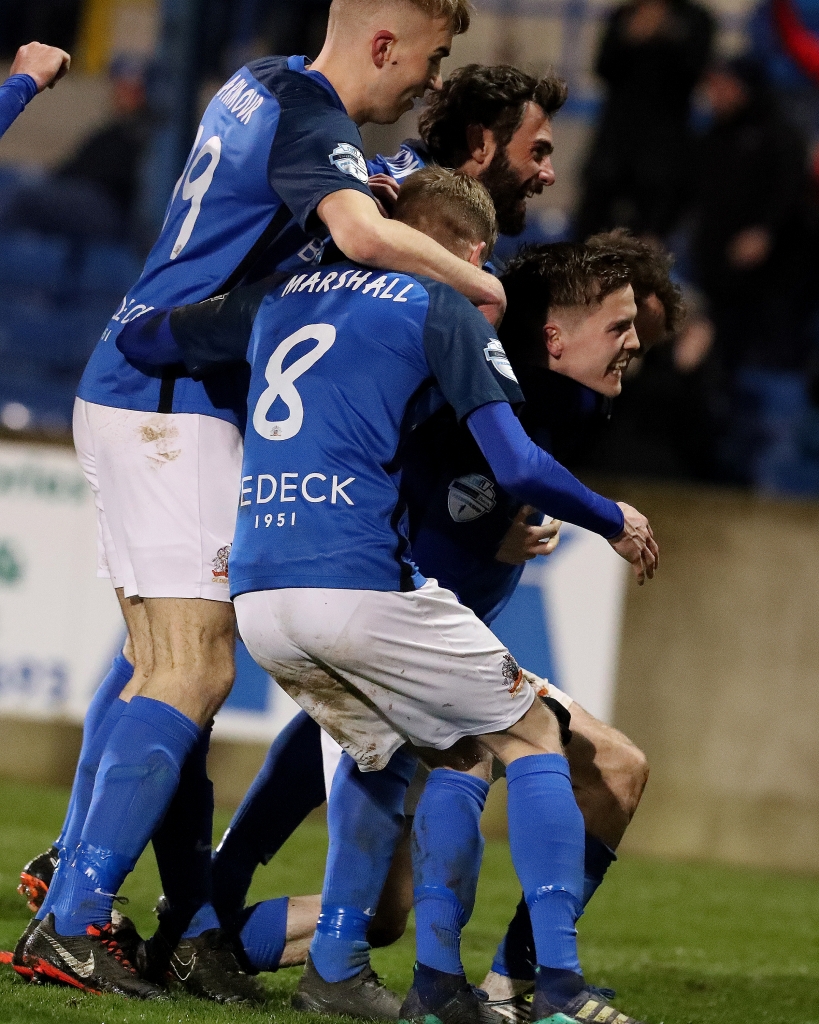 Next up for Glenavon is the visit of Dungannon Swifts to Mourneview Park on Saturday March 16th (kick-off 3pm).