Josh Daniels, who was celebrating his 23rd birthday, scored a brilliant volley to earn Glenavon a well-deserved point in Friday night’s 1 – 1 draw with Crusaders at Seaview.

David Cushley gave the Crues the lead late in the first half with a strike from outside the box, although Glenavon goalkeeper Jonathan Tuffey will be disappointed not to have saved it.

Daniels equalised in spectacular fashion when he converted Eoin Wearen’s cross on the volley in the 78th minute to ensure Glenavon earned a draw which was the least they deserved from the match.

Matthew Snoddy teed up Cushley in the sixth minute and the Crues forward wound up his left foot to have a go from 20 yards, but Wearen was alert to the danger and got across to make a block and deflect the ball behind for a corner.

Three minutes later Conor McCloskey did well at the other end on the left flank to beat Rory Hale and deliver a cross to the far post. Michael Ruddy got his head to the ball just in front of Aaron Harmon to deny the Glenavon midfielder an opportunity to open the scoring.

On 10 minutes Ruddy clipped the ball into the box for Philip Lowry, who in turn laid it off for Ronan Hale to have a pop from the edge of the box. The forward’s shot was well struck, but Tuffey was equal to it, palming the ball down and away from the danger zone.

The home side came very close to breaking the deadlock in the 24th minute when Cushley played a corner to Rory Hale just outside the Glenavon penalty area. Hale took one touch to set himself, then struck a low shot that went just inches wide of Tuffey’s right-hand post.

A minute later Rhys Marshall burst forward from defence, carrying the ball over the halfway line before attempting to release McCloskey, but the pass was over-hit and Sean O’Neill was able to gather.

Glenavon really should have taken the lead 10 minutes before the break. Andrew Mitchell came deep to receive the ball near the halfway line before playing it back to Marshall. The full-back’s ball down the line found McCloskey, who then fed it wide for Harmon to send over a cross from the right. The ball travelled all the way through to the far post for Daniels. The winger fizzed a dangerous low cross into the six-yard box which McCloskey got on the end of, but somehow he failed to divert the ball past O’Neill when it looked certain that he would find the net.

More good build-up play saw Glenavon fashion another chance in the 40th minute. Marshall won a header and nodded the ball down to Harmon, who played a one-two with Robert Garrett. Harmon then turned back inside before playing the ball to Marshall. The right-back set up Mitchell to have a shot from 10 yards, but Rory Hale got an important block in to deny the Glenavon number nine. 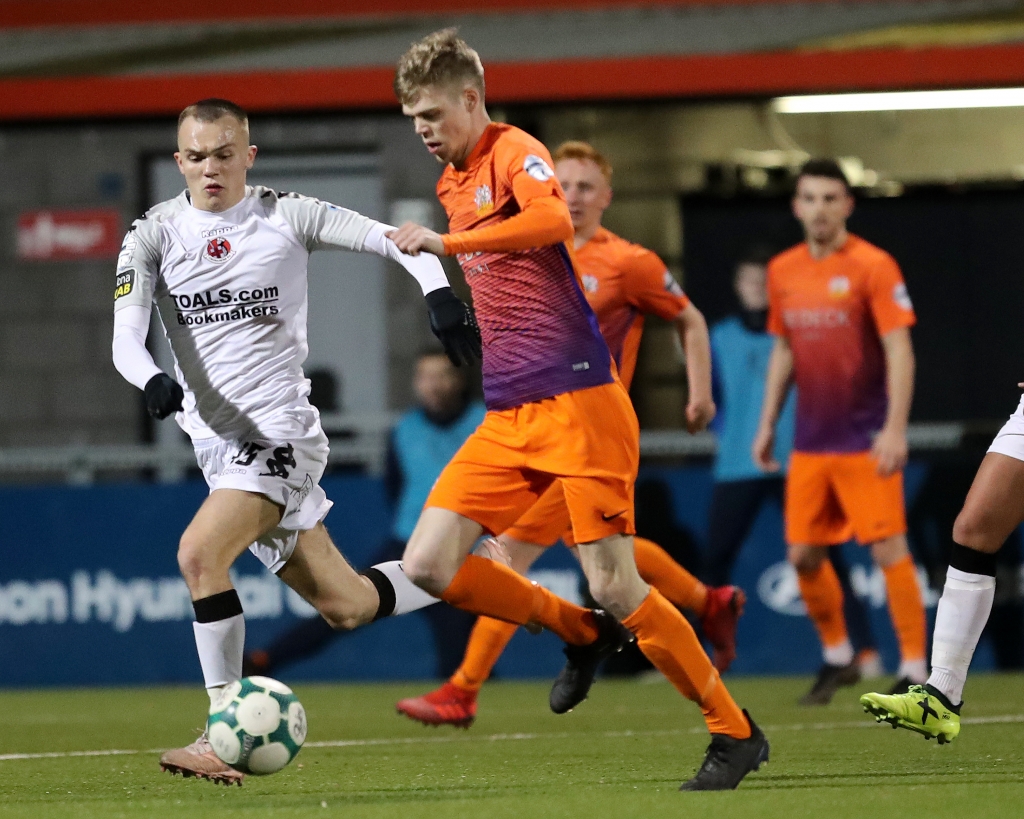 In the 42nd minute the Hale brothers combined to good effect when Rory’s long diagonal ball from left to right released Ronan. The younger Hale twisted and turned his way past James Singleton before firing in a left-footed shot which forced Tuffey into making a decent save.

The game’s opening goal arrived a minute later. Snoddy picked a loose ball up in midfield and drove forward into the Glenavon half before feeding it out to Cushley. The forward came inside and struck a low shot from 25 yards with his left foot which found its way beyond the dive of Tuffey to make it 1 – 0 to the home side. Cushley has a deserved reputation as a scorer of spectacular goals, but in truth this wasn’t one of his better efforts, and Tuffey really should have kept it out.

Glenavon started the second half brightly, and they might have grabbed an equaliser just five minutes after the break. Marshall’s long free-kick from close to halfway drifted through to Mitchell at the far post. The striker’s right-footed half-volley was straight at O’Neill.

The visitors came even closer to equalising in the 68th minute. Mitchell sent a free-kick into the Crusaders penalty area and when the home side failed to clear the ball it fell for Marshall. His right-footed shot from a tight angle was very well struck, but O’Neill stood tall at his near post to keep the effort out. However, the ball broke to Mitchell, who had made his way forward after taking the initial free-kick, and his sweetly struck shot with his weaker right foot cannoned off the post. 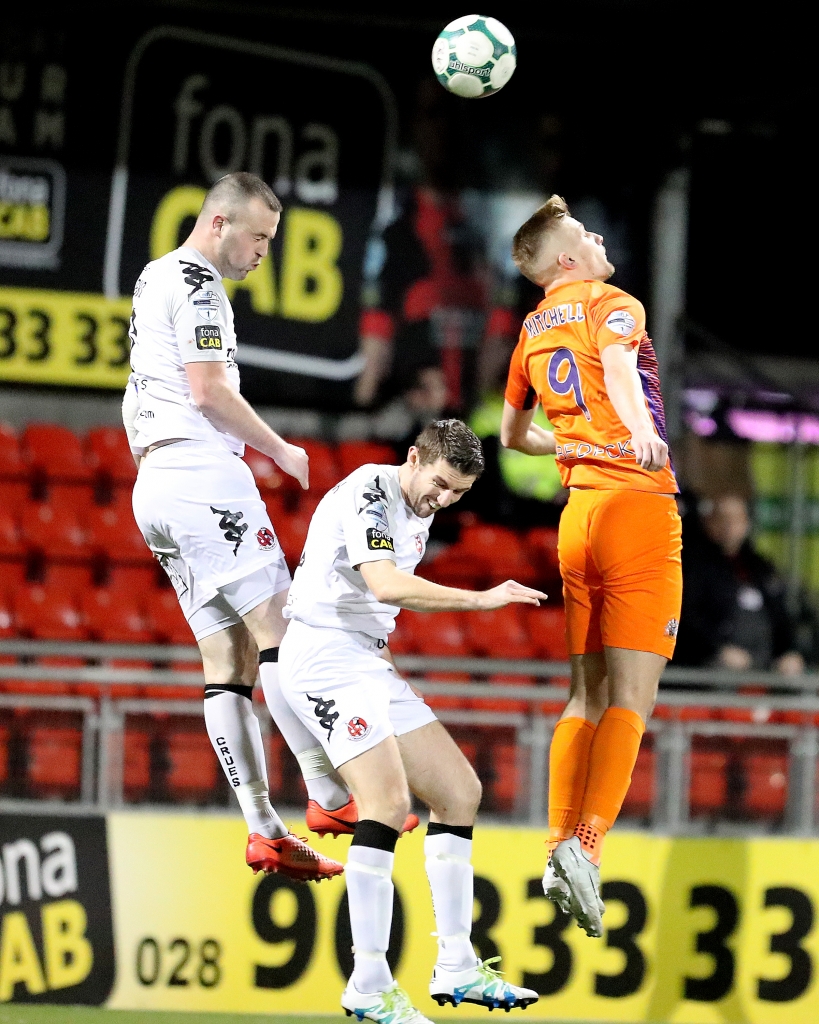 Cushley provided a reminder of the threat which remained at the other end of the pitch in the 70th minute. Ruddy’s throw-in on the left found Snoddy, who played the ball inside to Lowry. The midfielder passed it to Cushley on the left corner of the penalty area. He battled his way past Marron before hitting a rasping shot with his left foot which Tuffey did very well to push over the bar with his right hand.

Glenavon continued to push for an equaliser. On 75 minutes Wearen played a pass inside which Garrett cleverly dummied to leave for Marshall. The full-back drove forward and got a shot in from 20 yards with his left foot, but it was tamely struck and O’Neill saved comfortably.

However, the Lurgan Blues were rewarded with the goal their second-half performance so richly deserved just three minutes later. Marshall’s first touch was excellent as he brought the ball under control in the centre circle before spreading the play wide to McCloskey on the right. He then knocked the ball down the line for Wearen, who crossed it first time with his right foot. Daniels met the ball at the back post, striking a stunning first-time volley with his right foot which rifled into the net, giving O’Neill no chance. 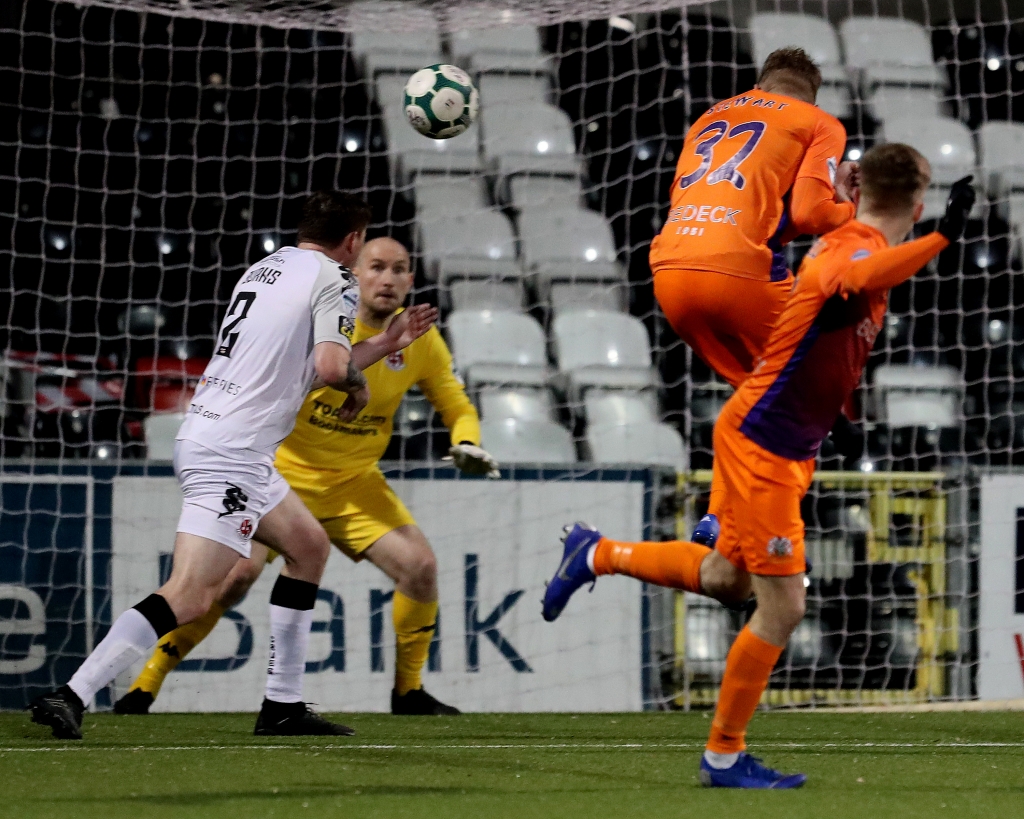 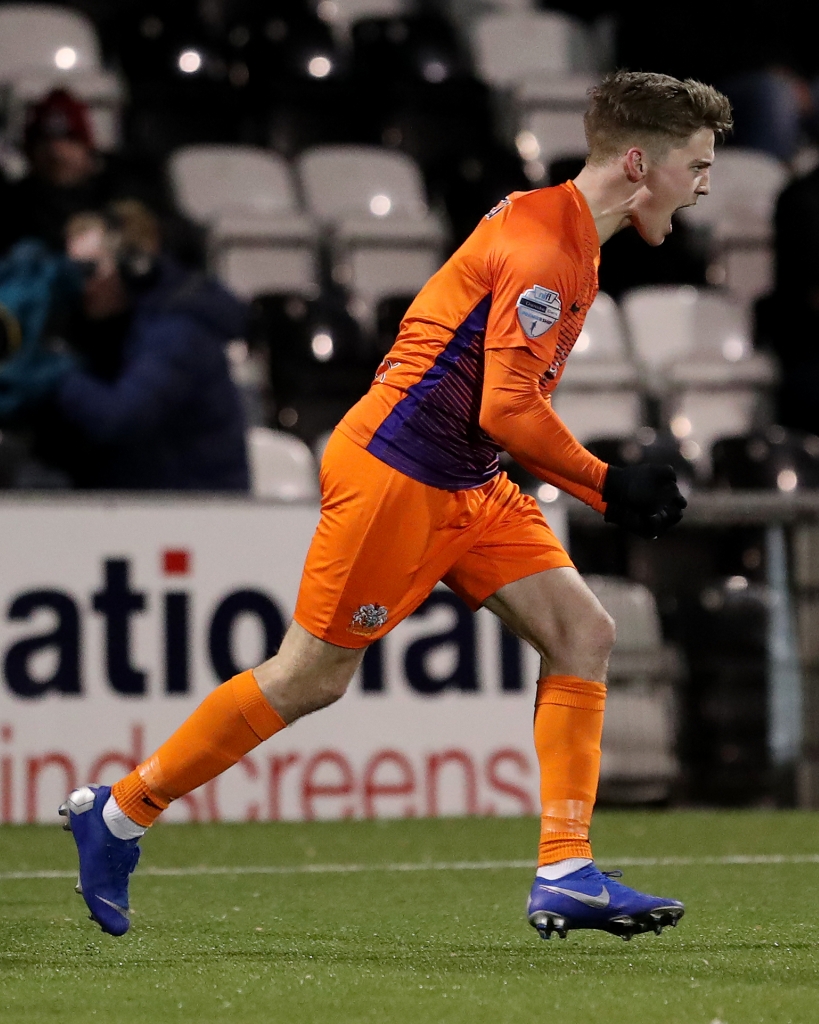 Seamus Sharkey might have grabbed all three points for Glenavon two minutes from time. Mitchell whipped in a corner from the right which fell to McCloskey at the back post. He tried to squeeze a shot in from a tight angle, only for his effort to be smothered by O’Neill. The ball rebounded out to Sharkey, but he dragged his low right-foot shot wide of the left-hand post.

Substitute Robbie Norton then had a go from all of 30 yards in the final minute of normal time, but O’Neill dived down to his right to make a routine save.

Player-manager Gary Hamilton came off the bench in injury time, hoping to have a similar impact to the one he had at the Oval on Monday night, but it wasn’t to be on this occasion and the game finished 1 – 1.

Next up for the Lurgan Blues is the rearranged Premiership fixture against Cliftonville, which will take place at Mourneview Park on Saturday March 2nd (kick-off 3pm).