Player-manager Gary Hamilton came off the bench to inspire Glenavon to a late comeback victory as the Lurgan Blues defeated Glentoran 2 – 1 at The Oval on Monday night.

The home side had gone ahead when Darren Murray converted from the penalty spot late in the first half after Caolan Marron fouled Robbie McDaid.

Hamilton equalised for Glenavon in the 82nd minute when he flicked the ball past Dwayne Nelson following a throw-in, and Conor McCloskey completed the comeback for the visitors six minutes later when he raced clear and coolly finished to grab a welcome three points for the Mourneview men.

It was the home side who threatened first when John Herron caught Seamus Sharkey dawdling on the ball in the fourth minute and pulled it back to Darren Murray. However, the striker couldn’t bring the ball under control and the chance slipped away.

At the other end, Andrew Mitchell whipped a dangerous ball across the box in the 12th minute but none of his teammates could get on the end of it.

A minute later Robert Garrett lobbed a ball into the box to create a chance for Stephen Murray. Glenavon’s top scorer couldn’t keep his volley down when he really should have hit the target.

A McCloskey corner fell for Robert Garrett on 16 minutes and the midfielder sent a right-footed volley goalwards. John Herron had to be alert to block the shot.

A few seconds later Mitchell sent another cross in, this time from the right flank, which picked out strike partner Cameron Stewart, but he couldn’t keep his header down. 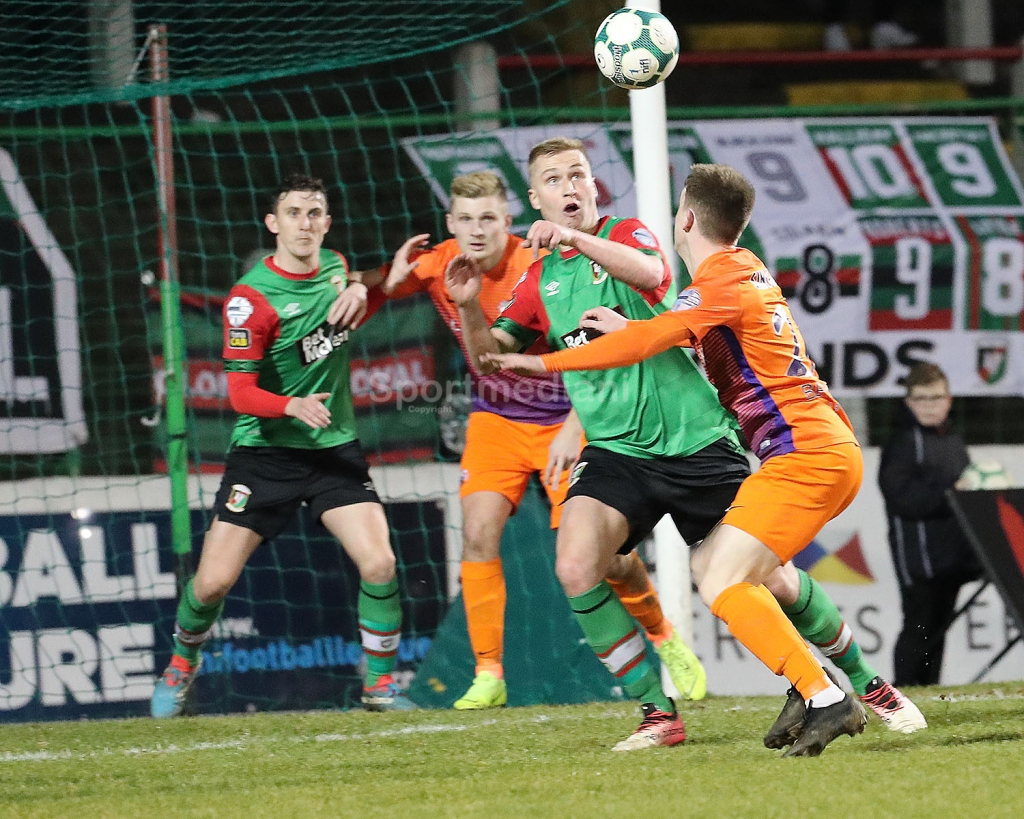 Darren Murray fed the ball wide to McDaid on the left in the 24th minute and his cross-cum-shot almost caught Jonathan Tuffey out. The Glenavon goalkeeper did well to palm the ball away from under the crossbar.

The Glens broke well in the 28th minute, with McDaid playing the ball out to Conor Pepper on the right, who sent in a cross. When Robert Garrett miskicked in his own penalty area the ball wriggled through to McDaid, who had continued his run, but the former Glenavon striker failed to read the situation and couldn’t bring the ball under control to get a shot away.

On the half-hour mark McCloskey sent over a deep cross from the right which found Josh Daniels at the far post. The winger headed the ball back towards James Singleton, but it just wouldn’t come down for the full-back and the Glens were able to clear.

A minute later Nelson had to produce a smart save to deny Mitchell when the striker struck a brilliant effort from the right corner of the penalty area. The Glens keeper dived to his right and pushed the ball round the post.

Darren Murray attempted to lob Tuffey when the ball broke for him in the 37th minute, but it was a comfortable save for the visiting goalkeeper.

However, Murray wasn’t to be denied three minutes later when he was presented with an opportunity to open the scoring from the penalty spot. Marron initially did well to block McDaid’s shot and divert the ball on to the post. However, when the ball broke in the penalty area McDaid was quickest to it and Marron foolishly dived in and brought the Glens striker down from behind, giving referee Jamie Robinson no option but to award the spot-kick. Murray sent Tuffey the wrong way and slotted the ball inside the right-hand post to open the scoring.

The Lurgan Blues almost equalised just three minutes later following a McCloskey corner. Sharkey couldn’t make a clean connection with his initial header, but the ball fell for him and he turned it goalwards with his right boot. The centre-back was unlucky to see his effort strike the crossbar and go over. 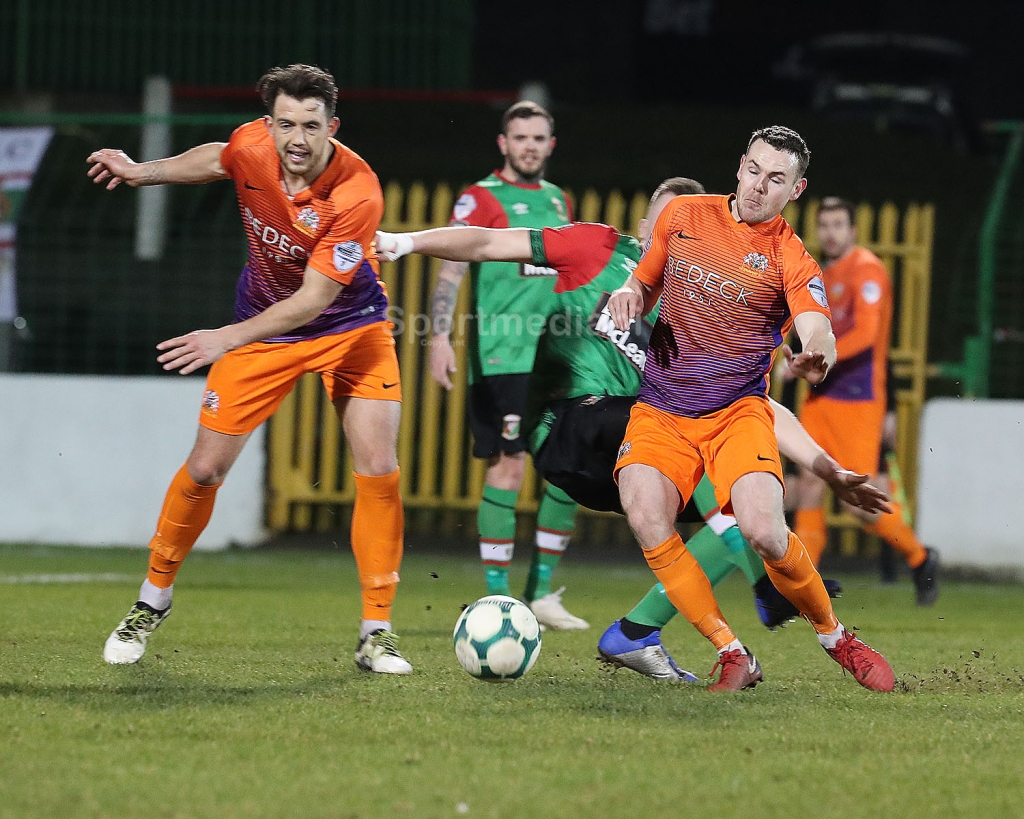 Three minutes into the second-half Robert Garrett floated over a cross which found Stephen Murray. His header drifted wide of the far post and just evaded the lurking Daniels.

On 50 minutes Chris Gallagher saw his effort from a free-kick comfortably saved by Tuffey.

Glens captain Marcus Kane floated over a cross from the left in the 63rd minute. Lukasz Gwiazda rose to meet the ball but his header was tame and Tuffey saved easily.

Calum Birney had a chance to double Glentoran’s lead 10 minutes later when he got his head to a Gallagher corner, but he flashed his effort wide when he should have done better.

On 75 minutes Mitchell won a free-kick in a good position just outside the Glentoran penalty area. Substitute Andrew Hall stepped up to take the set-piece, but the winger sent his effort harmlessly over the bar.

Hamilton replaced Mitchell just before Hall struck that free-kick, and it took the Glenavon player-manager just six minutes to get his name on the scoresheet and draw his side level. Fellow substitute Eoin Wearen headed on a Singleton throw-in from the left and Hamilton deftly flicked the ball beyond Nelson with his right boot to grab the equaliser. 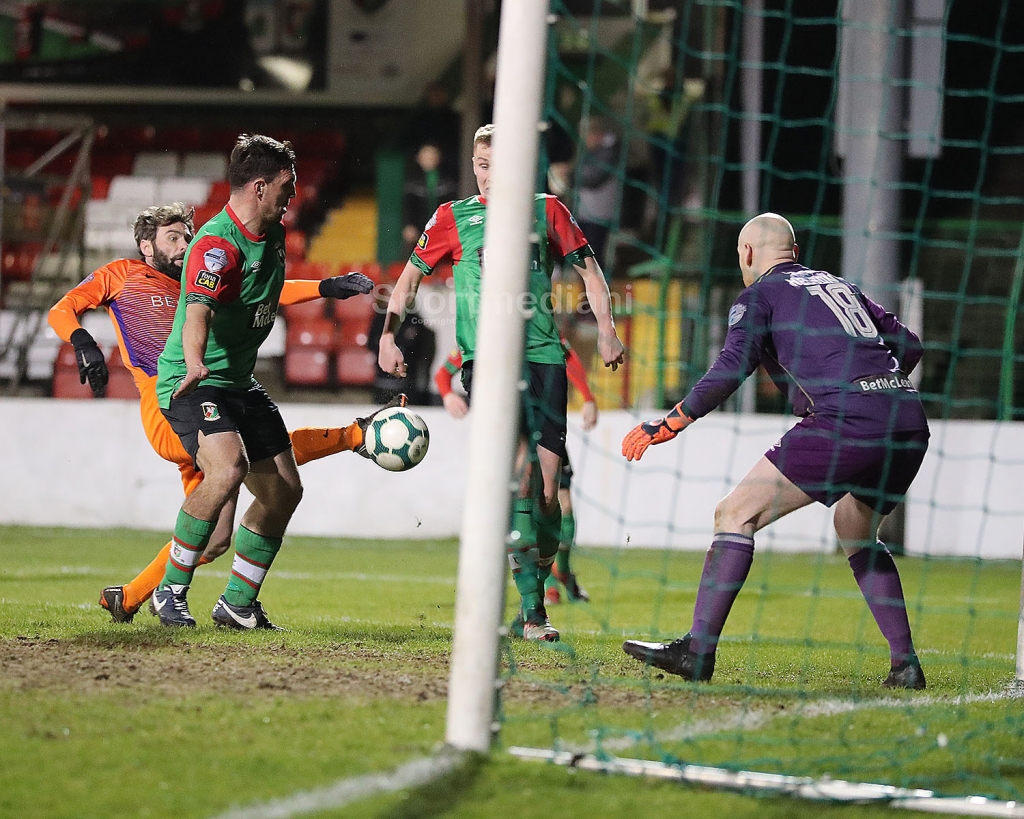 Glenavon’s comeback was complete six minutes later when a Marron header sent McCloskey through on goal. The forward showed excellent composure as he lifted the ball over Nelson and into the far corner to secure a massive three points for the Lurgan Blues.

Next up for Glenavon is a trip to Seaview to take on Crusaders on Friday night (February 22nd). With Glenavon sitting in fourth place in the Premiership table, six points behind the third-placed Crues and with a game in hand, this will be a hugely important fixture. Kick-off is 7.45pm.