Glenavon Ease Through to Round 6 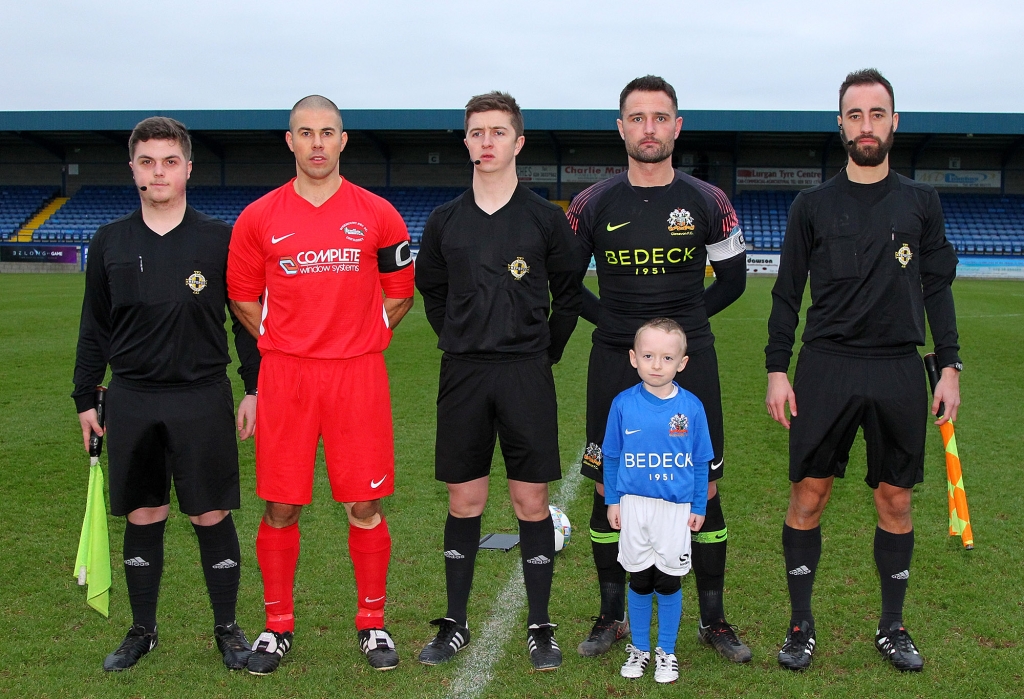 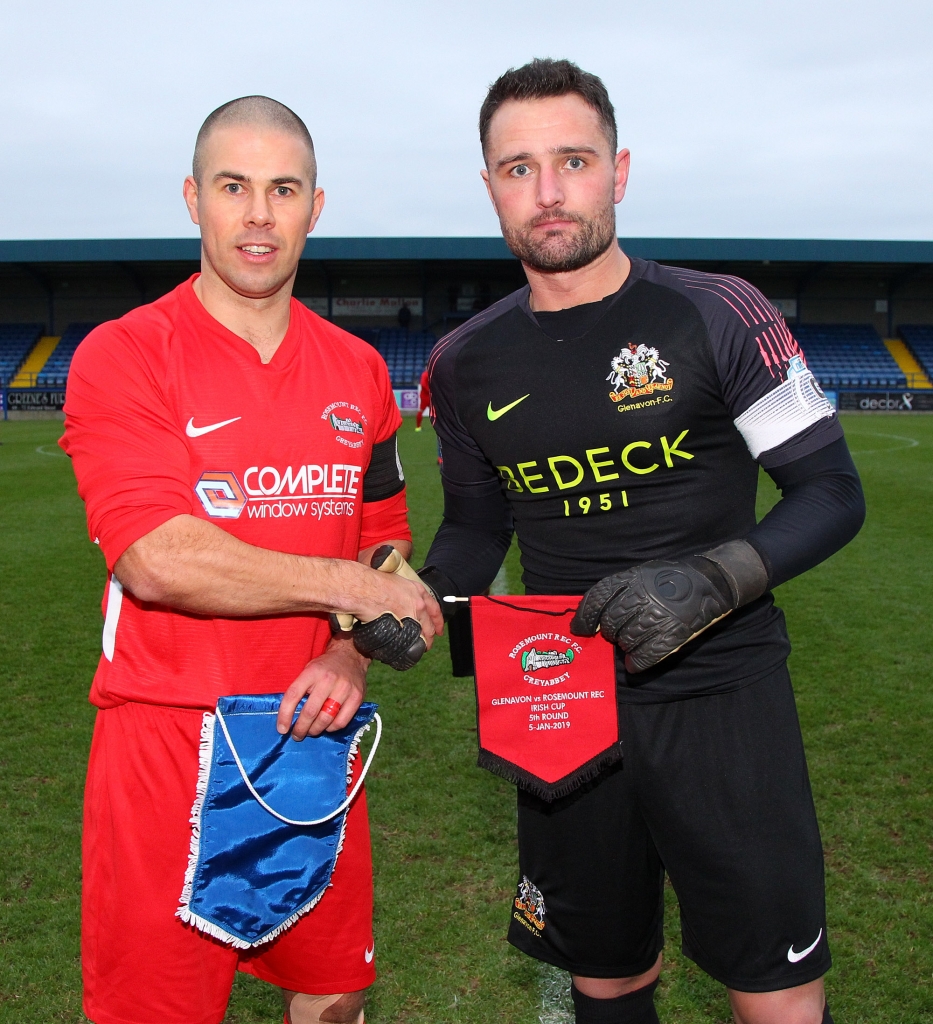 Stephen Donnelly and player/manager Gary Hamilton each scored a brace and missed a penalty as Glenavon ran out 5 – 0 winners over Northern Amateur League Division 1C side Rosemount Rec in the fifth round of the Irish Cup at Mourneview Park on Saturday.

Donnelly opened the scoring in the 17th minute after being teed up by Jack O’Mahony.

The striker then failed to convert from the penalty spot after Josh Daniels had been fouled by goalkeeper Steven McKay.

Donnelly did manage to grab his second on 20 minutes when he scored with a delightful chip.

Hamilton came off the bench in the second half and had an immediate impact, converting two crosses from fellow substitute Conor McCloskey to score in the 69th and 75th minutes.

Jordan Jenkins rounded the scoring off on 79 minutes when he bundled the ball over the line following another McCloskey cross, before Hamilton saw his penalty saved by McKay in the final minute of the game. 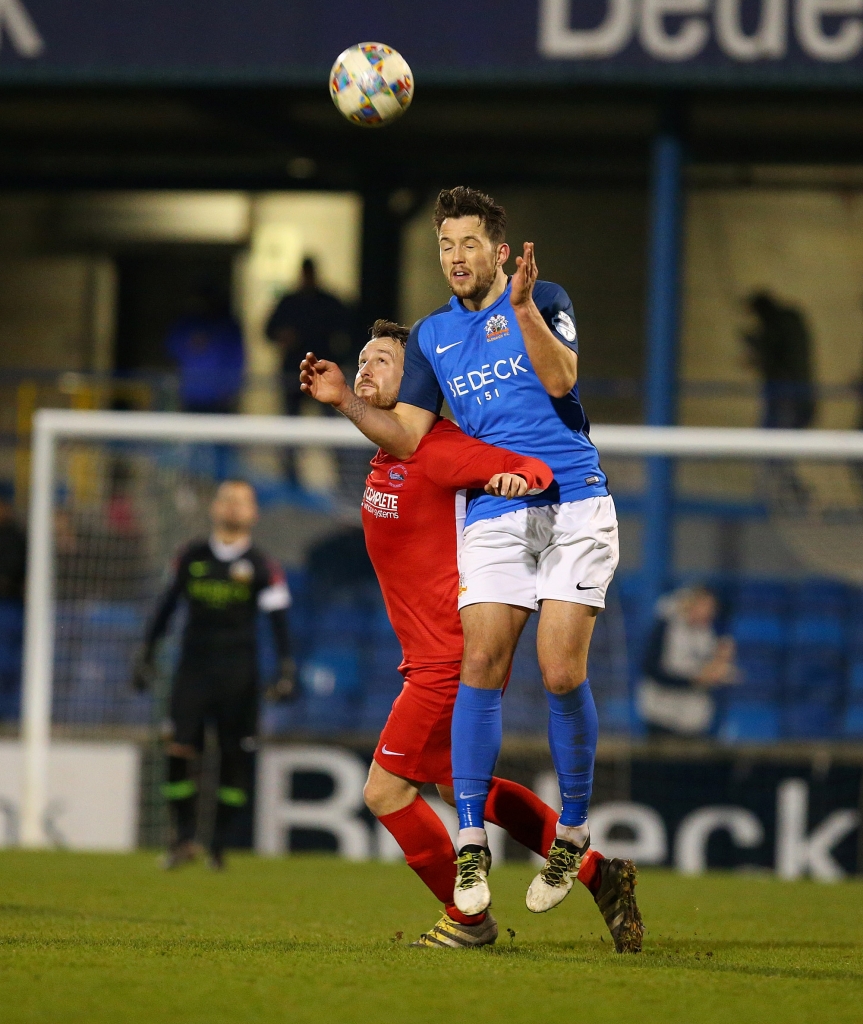 Seamus Sharkey made his debut for Glenavon.

It was the visitors who had the first sight at goal when Dean Annett played in Scott Shannon, but his tame left-footed shot went straight at Jonathan Tuffey.

Glenavon had their first shot on goal just a minute later when Daniels had an ambitious overheard-kick effort. McKay, however, made a comfortable save.

The deadlock was broken on 17 minutes. Jenkins sent a cross into the box from deep on the left flank. O’Mahony out-jumped Neill Melville and nodded the ball into the path of Donnelly and the striker struck his half-volley beyond the dive of McKay to make it 1 – 0. 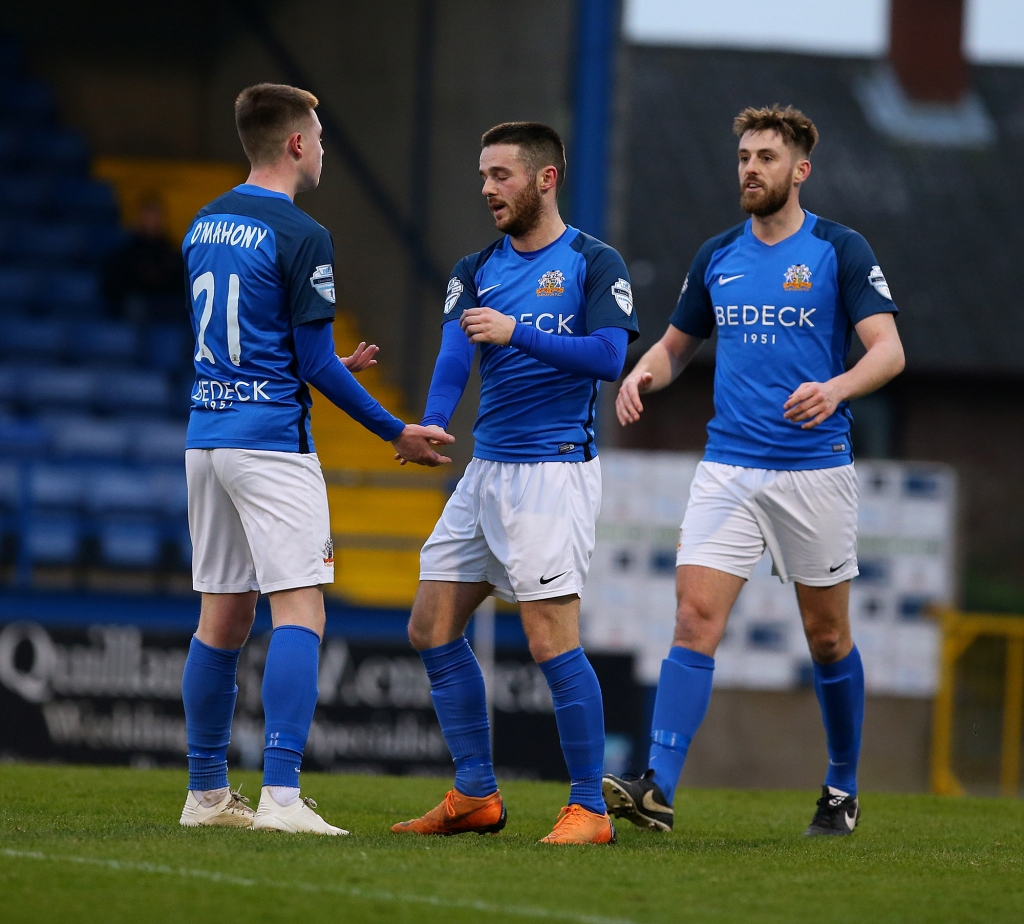 It should have been 2 – 0 a minute later when Donnelly had the chance to grab his second from the penalty spot. The spot-kick was awarded after McKay clumsily upended Daniels. However, the goalkeeper made amends by making an excellent save to keep out Donnelly’s penalty, diving down to his right to tip the ball on to the post.

Donnelly atoned for his penalty miss just two minutes later by scoring a sublime chip to double Glenavon’s advantage. Carrying the ball forward, he noticed McKay off his line and struck an inch-perfect shot to lob the keeper from 25 yards.

Robbie Norton was straight back in the action after returning from his loan spell at Warrenpoint.

Robbie Norton fired his shot from distance narrowly over the bar on 26 minutes, while Rhys Marshall’s effort found the side-netting after he’d played a neat one-two with Jenkins in the 42nd minute.

Rosemount were unfortunate not to pull a goal back on the stroke of half-time when Shannon headed Luke Adair’s corner towards the far corner. Norton was on hand to clear the ball off the line and preserve Glenavon’s clean sheet.

McKay produced another smart save on 53 minutes to deny Donnelly his hat-trick. The striker’s well-struck shot from 20 yards was heading for the far corner before the keeper dived down to his left and tipped the ball round the post.

Player/manager Hamilton came on to replace Donnelly in the 67th minute and he struck a quick-fire double to put the result beyond doubt.

Hamilton’s first came in the 69th minute. Neat build-up play on the right involving Niall Grace and Jenkins released McCloskey and the winger squared the ball for Hamilton, who side-footed into the far corner with what may well have been his first touch. 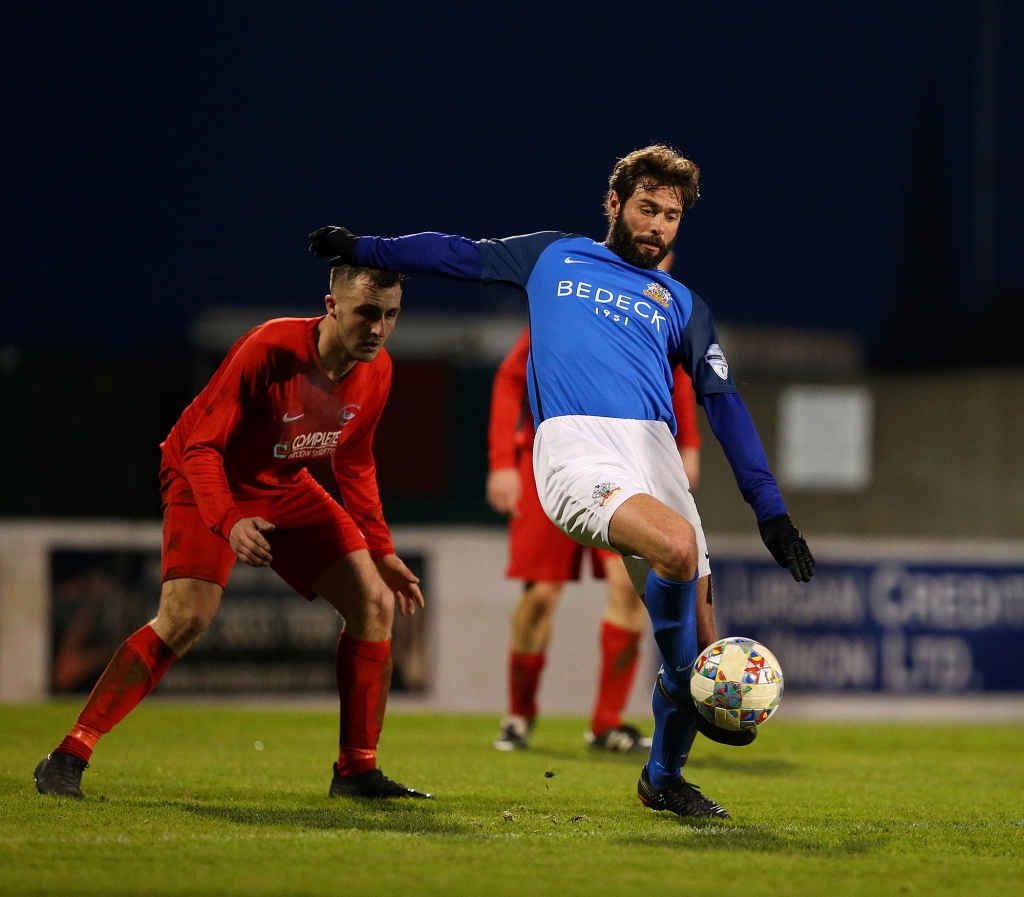 Hamilton’s second and Glenavon’s fourth arrived six minutes later, with McCloskey again the provider. This time the winger was found with an excellent long diagonal ball from left to right by Daniels. McCloskey put it on a plate again for Hamilton, who converted from six yards.

The fifth goal came in the 79th minute. McCloskey beat full-back Melville with a step-over before firing in a low cross which deflected off Stephen Atcheson. McKay was able to prevent an own goal but the ball subsequently fell to Jenkins and the young striker bundled it over the line. 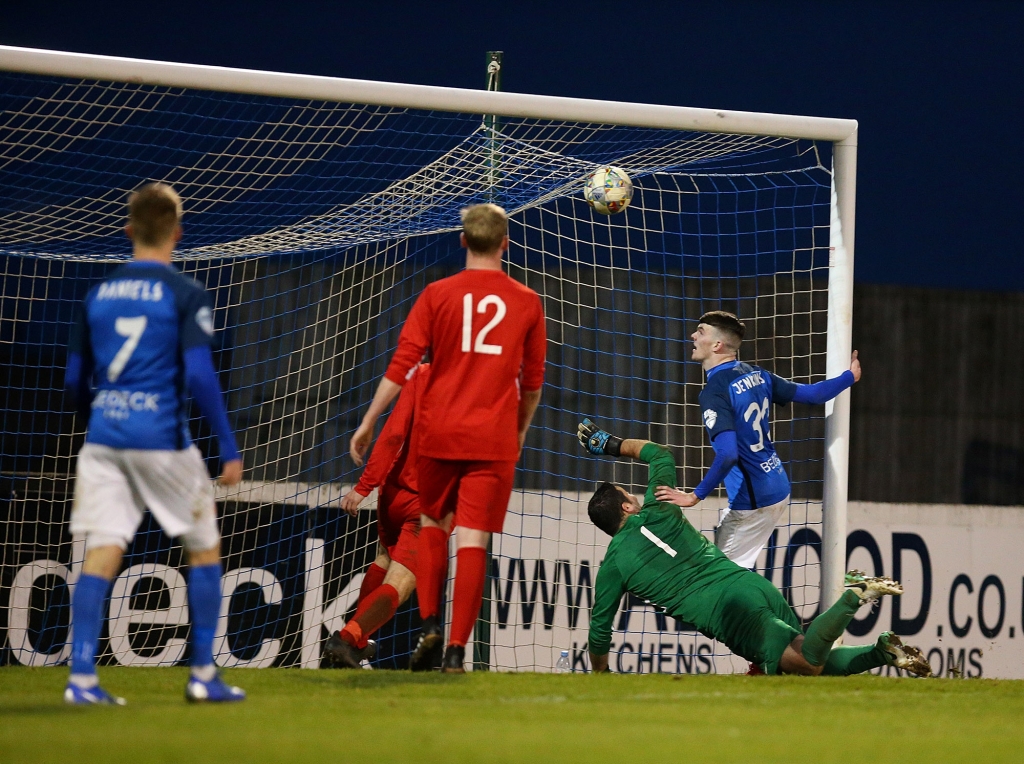 Daniels was again the man who was fouled when Glenavon were awarded their second penalty of the game in the final minute, being taken down by substitute Thomas Harrison. Hamilton stepped up to take the spot-kick and attempt to complete his hat-trick. The player/manager opted to go for a Panenka-style dink down the middle, but McKay read it and stood up to catch the ball, meaning the game finished 5 – 0.

The Lurgan Blues have been handed another home draw for the sixth round. However, it is a tricky tie, as they entertain fellow Premiership side Dungannon Swifts at Mourneview Park on Saturday February 2nd, in what is a repeat of last season’s sixth round fixture.

Glenavon return to Premiership action this weekend as they travel to Ballycastle Road to take on Coleraine on Saturday (January 12th) (kick-off 3pm).