Glenavon and Institute served up a second 3 – 3 draw at Mourneview Park in the month of December on Saturday.

The Lurgan Blues led by two goals to nil at half-time courtesy of two headers by Man of the Match Rhys Marshall.

However, the visitors turned the game on its head with three goals in the opening 22 minutes of the second half from Stephen Curry, Michael McCrudden and Colm McLaughlin to lead 3 – 2.

Andrew Mitchell responded for Glenavon on 78 minutes to secure a third successive draw for the Mourneview men over the Christmas period.

It was evident from the early stages of the game that both sides were going to attack each other in much the same manner that they did in the previous game earlier in the month.

Stute striker Joe McCready whipped a wicked ball across the Glenavon penalty area in the fifth minute, while his teammate Dean Curry did well to head a dangerous Mitchell cross over the bar in the 13th minute when he could easily have turned it into his own net.

Stephen Murray fed the ball wide to Gary Muir in the 18th minute and the midfielder squeezed a low shot in at the near post, but Institute goalkeeper Martin Gallagher saved with his legs, while three minutes later the visitors’ captain McCrudden blazed a volley over the bar with his left foot. 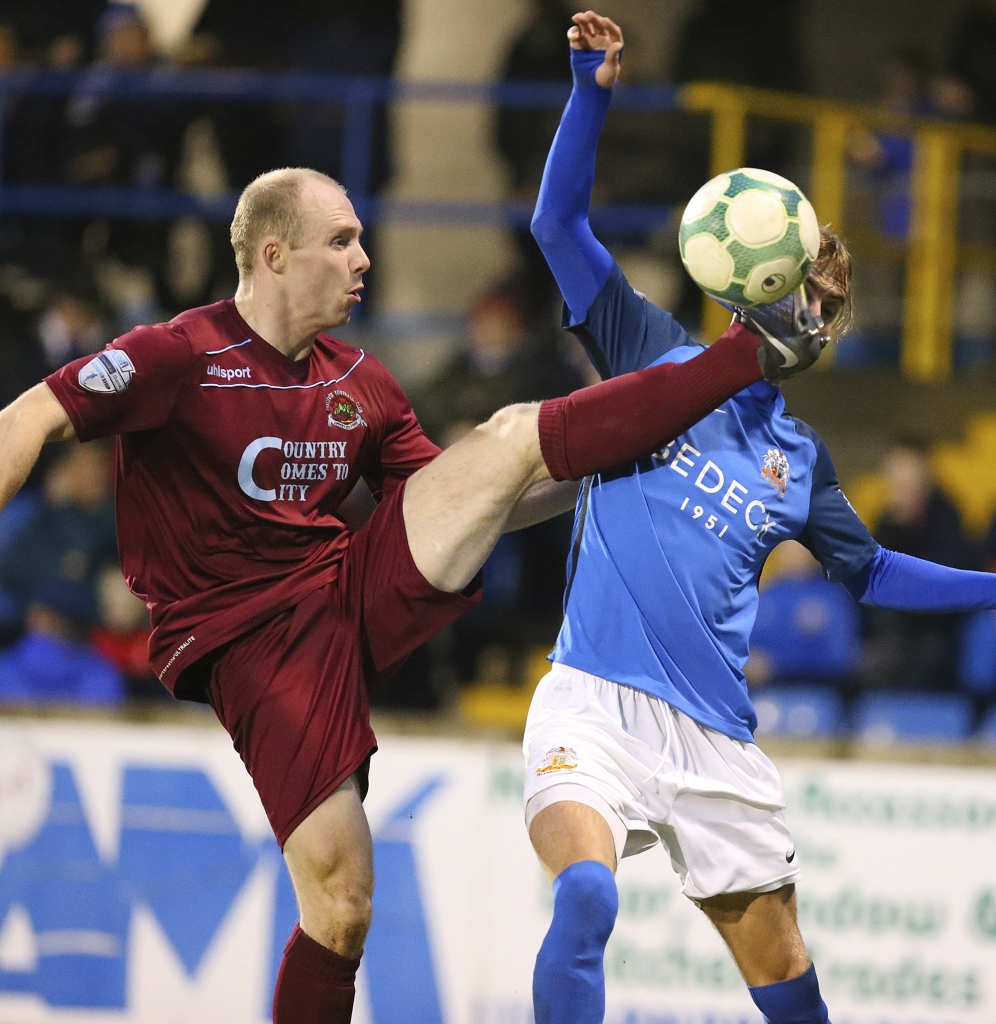 Apparently this wasn’t a foul! Photo by Alan Weir

The opening goal arrived 10 minutes before half-time. Andrew Hall had an effort on goal with a free-kick from 30 yards out. Gallagher dived down to his right to make a save, but he could only palm the ball into the path of Murray. The striker stood the ball up on the six-yard line with a left-footed cross and Marshall headed in to make it 1 – 0 to the hosts.

On 41 minutes Mitchell whipped over another dangerous cross, but it was just too high for Hall to get his head to it at the back post.

The second goal, however, did arrive just a minute later. Mitchell’s corner from the right was cleared, but the ball was fed back out to him by Daniel Larmour. Mitchell picked out Marshall with an inch-perfect cross with his weaker right foot and the full-back made no mistake, heading in his and Glenavon’s second. 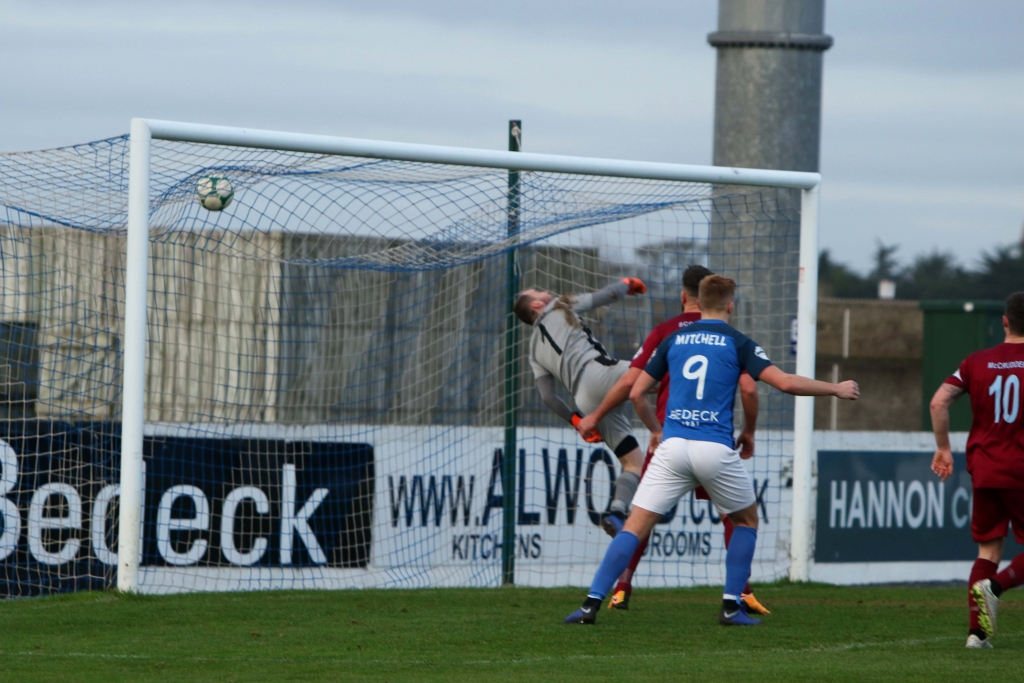 The early part of the second period saw a marked increase in the intensity of Institute’s play which the Glenavon defence struggled to cope with, and it was only a matter of time before the visitors got on the scoresheet.

Their first goal arrived on 55 minutes. Jonathan Tuffey raced off his line to head clear a long ball from Stute right-back Aaron Jarvis, but the Glenavon goalkeeper only succeeded in heading the ball straight to the feet of Stephen Curry. With Tuffey stranded, the winger expertly lobbed him from 40 yards to halve the away side’s deficit.

Curry turned provider four minutes later when he sent a low cross into the box after being fed by McCrudden. The ball bobbled about in the box as Glenavon failed to clear and it was McCrudden who took full advantage, slamming into the roof of the net to grab his 16th goal of the season. 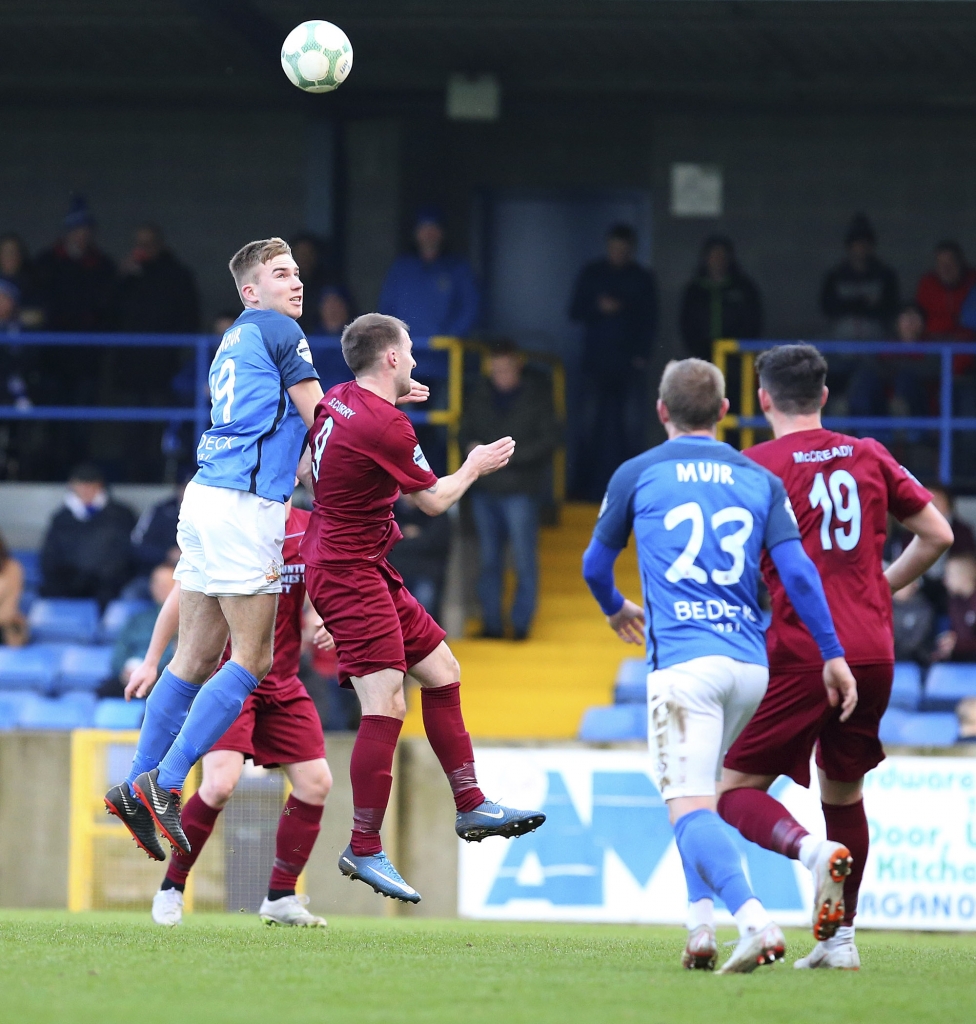 Glenavon might have regained the lead in the 66th minute when Marshall’s low cross made it all the way through to Mitchell at the far post, but the striker failed to direct his diving header on target.

As it turned out, it was the visitors who grabbed their third goal just a minute later. McCrudden sent Ronan Doherty clear with a delightful back-heel. Tuffey pulled off a good save to deny the Institute midfielder, but the rebound fell to McLaughlin, and his low shot took a deflection off Marshall which gave Tuffey no chance.

The Mourneview crowd sensed that the scoring wasn’t over just yet, and so it proved. When Stute failed to clear a ball lofted forward by Hall in the 78th minute, Mitchell couldn’t believe his luck when Aaron Harkin’s weakly struck back-pass presented him with a glorious chance. The striker duly dispatched it, sending the ball past Gallagher with the outside of his left boot. 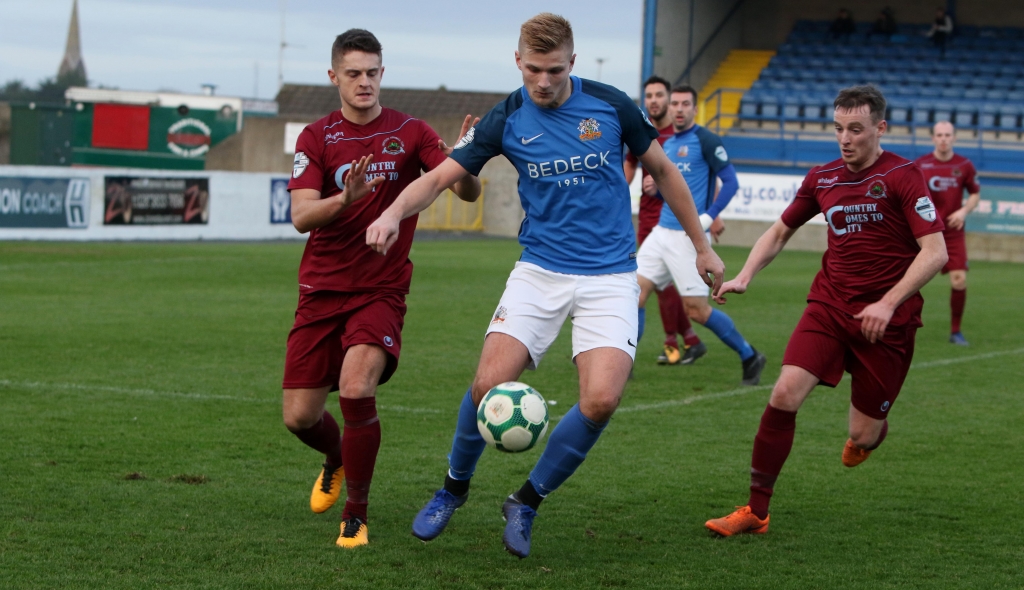 Neither side was content to settle for a point. Glenavon had strong appeals for a penalty turned down by referee Ian McNabb in the 83rd minute when James Singleton was pushed over in the box, while two minutes later substitute Jordan Jenkins flicked a Hall cross onto the crossbar. 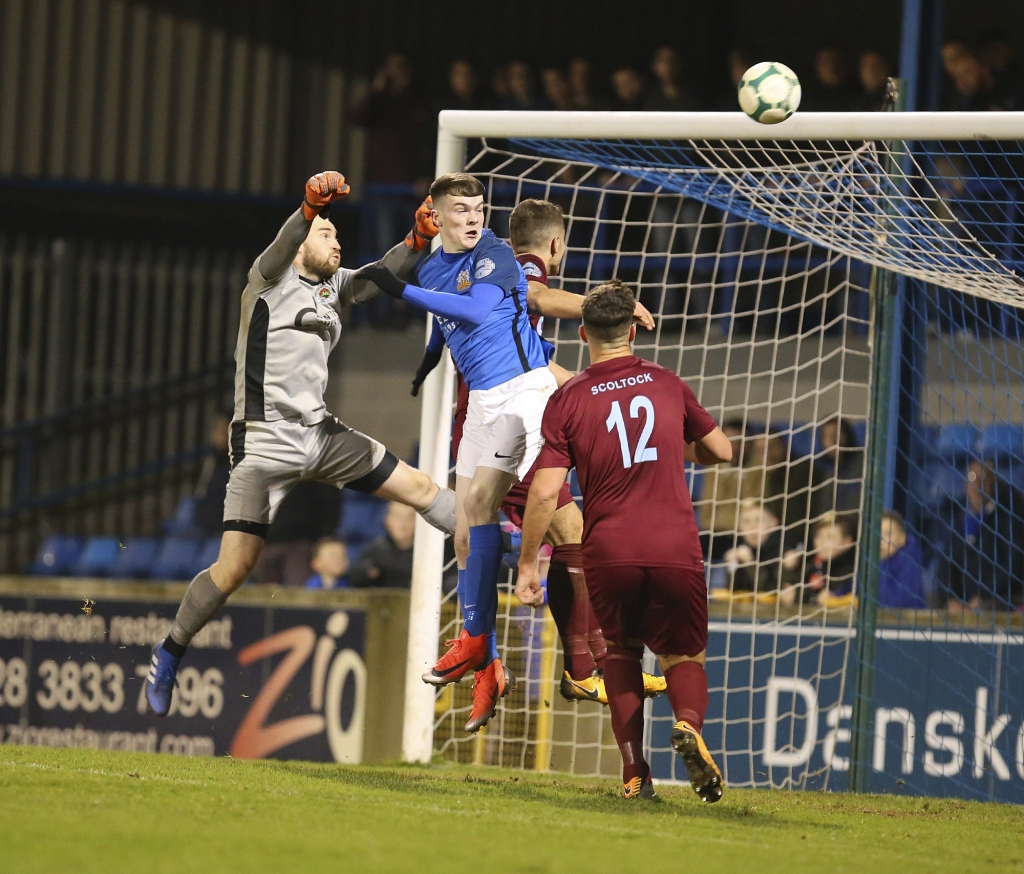 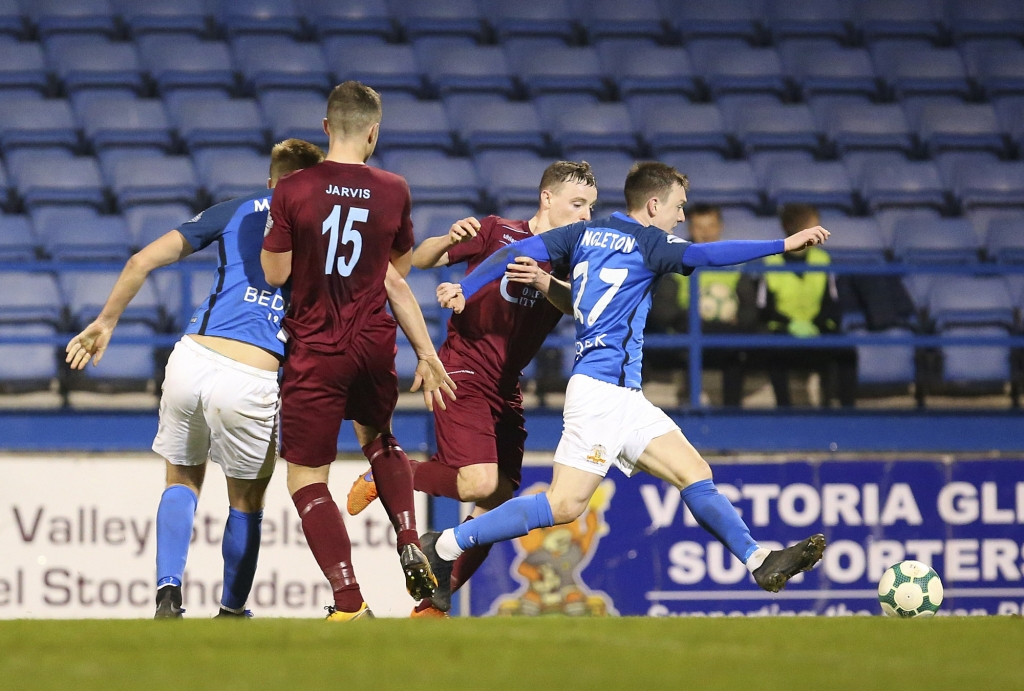 At the other end, McCrudden looked certain to secure all three points for Institute three minutes from time when he raced through on goal, only for Marshall to get back and make an excellent last-gasp challenge to deny him, and so the game finished 3 – 3.

Glenavon will be hoping to pick up their first win in four games on New Year’s Day when they welcome Warrenpoint Town to Mourneview Park (kick-off 3pm).