Honours Even at Windsor Park

Linfield and Glenavon played out an entertaining 0 – 0 draw at Windsor Park on Saturday, allowing league leaders Ballymena United to move four points clear at the top of the table.

Linfield striker Andrew Waterworth had a goal ruled out for offside late in the first half, while Andrew Mitchell’s effort struck the crossbar early in the second period.

Both sides might have nicked all three points late on. Caolan Marron’’s header for Glenavon was cleared off the line by Stephen Fallon, while at the other end Joel Cooper shot narrowly wide after he’d been picked out by a Daniel Kearns cutback.

Linfield captain Jamie Mulgrew had an impressive game at the heart of the Blues’ midfield, and he created the first opportunity of the game for himself in the third minute when he surged forward from deep in his own half, carrying the ball unchallenged for 50 yards before firing a shot over the bar.

Two minutes later Roy Carroll was forced to come off his line to clear the ball. It fell to the feet of Andrew Hall and the Glenavon winger had a pop from distance, but he could only send his effort over the bar.

On 10 minutes James Singleton met a Ben Doherty corner but could only direct his header straight at Roy Carroll, while Cooper attempted to lob Jonathan Tuffey in the Glenavon goal in the 22nd minute, but the Lurgan Blues’ keeper made a comfortable save.

Mitchell had an opportunity for Glenavon a couple of minutes later, but his shot on his weaker right foot went over the bar.

In the 27th minute Carroll very nearly made a costly error when he failed to hold a Hall corner, the ball slipping through his fingers and striking the post. Blues full-back Niall Quinn managed to hook the ball clear before a Glenavon player could turn it goalwards. 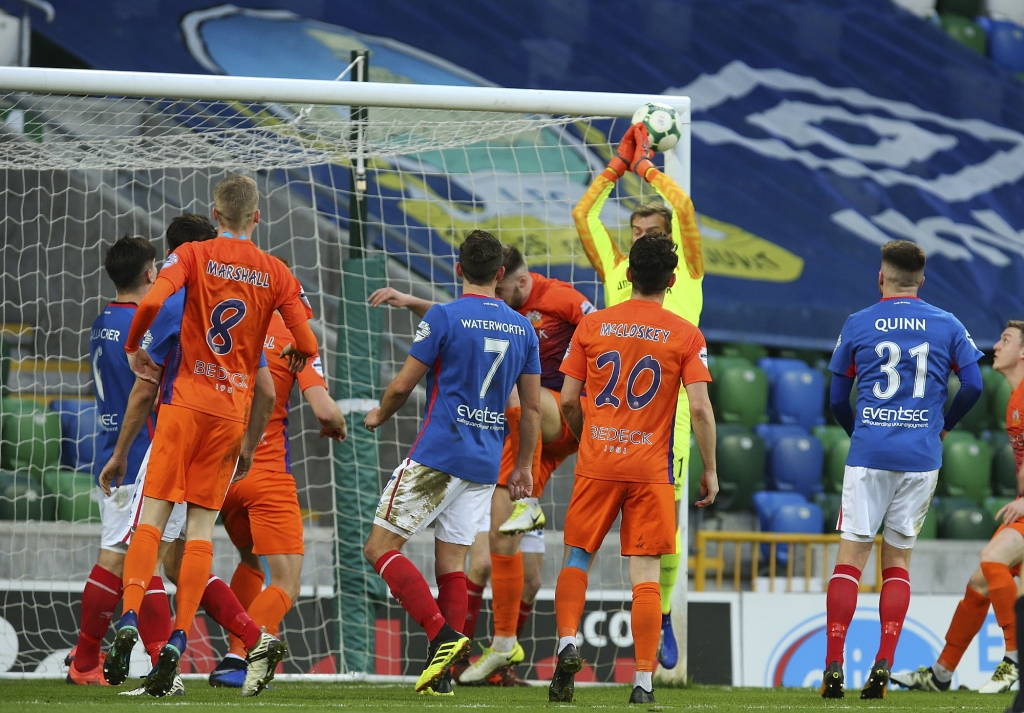 The ball slips through Roy Carroll’s gloves and rebounds off the post.

Carroll’s counterpart Tuffey’s blushes were spared by the linesman’s flag 10 minutes before the break. The Glenavon keeper failed to hold on to a low shot from Jordan Stewart and Waterworth pounced, turning the ball into the net for what appeared to be the opening goal, only for the linesman to rule it out for offside.

The away side nearly took the lead in bizarre circumstances just a minute later. The excellent Caolan Marron played a long ball into the Linfield penalty area, almost releasing substitute Stephen Murray. Josh Robinson got back to make a vital tackle, but in doing so turned the ball on to his own crossbar. However, Carroll came off his line and fell on the loose ball to smother the danger.

The last opportunity of the first half came Linfield’s way in the 43rd minute when Jimmy Callacher headed a Stewart cross narrowly over the bar.

The Lurgan Blues were very unlucky not to open the scoring in the first minute of the second half. Hall found the feet of Mitchell with a low cross from the right. Despite being put under pressure by Callacher, Mitchell spun and struck a shot with his left foot which cannoned off the crossbar, with Carroll well beaten. 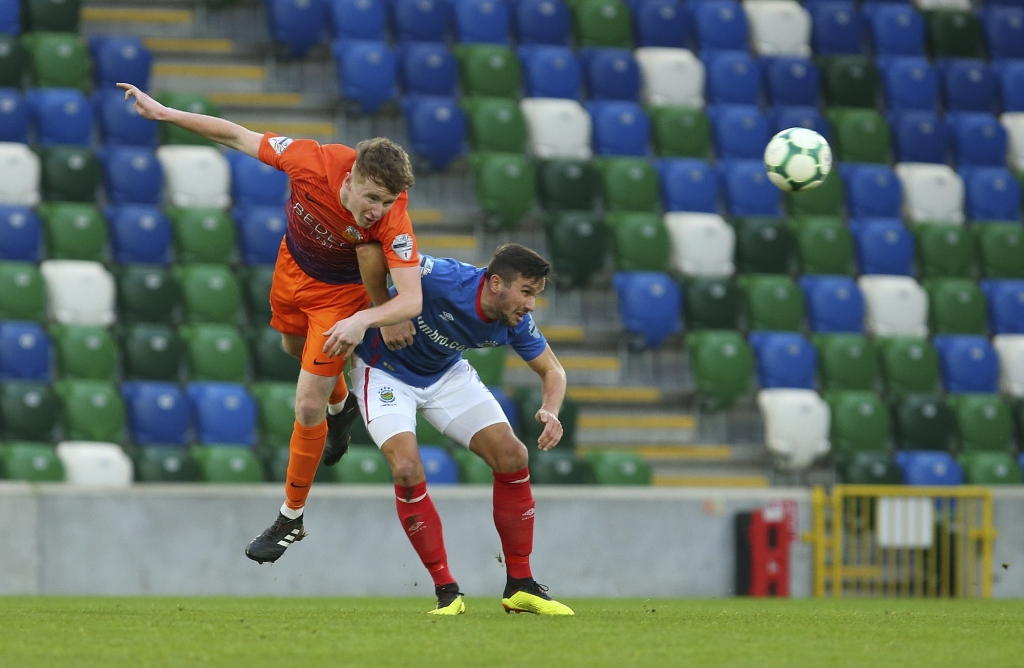 In response, Cooper fizzed a dangerous ball across the Glenavon six-yard line a minute later which was crying out for a touch but somehow evaded everybody.

In the 73rd minute Murray outpaced Robinson before squeezing a shot in from a tight angle, but Carroll was equal to it.

Two minutes later Rhys Marshall led a Glenavon counter attack, feeding the ball to Murray, who in turn found Hall, but the winger’s shot was blocked by a Linfield defender. 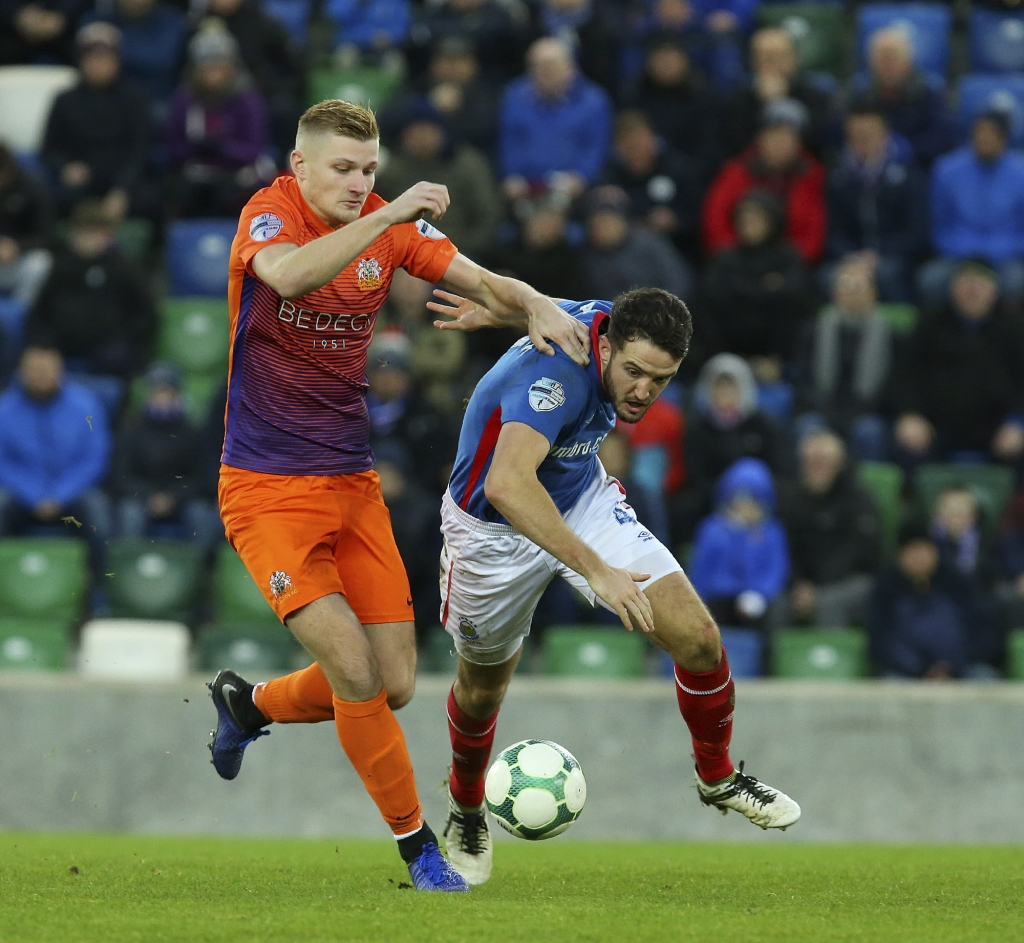 Marron thought he had won it for Glenavon in the 83rd minute when he rose to meet Doherty’s corner with a powerful header, only to see the ball cleared off the line by Fallon. Glenavon manager Gary Hamilton said after the game that, having watched replays of the incident, he believed the ball had crossed the line, but referee Tim Marshall and his assistant didn’t see it that way in real time, and no goal was awarded. 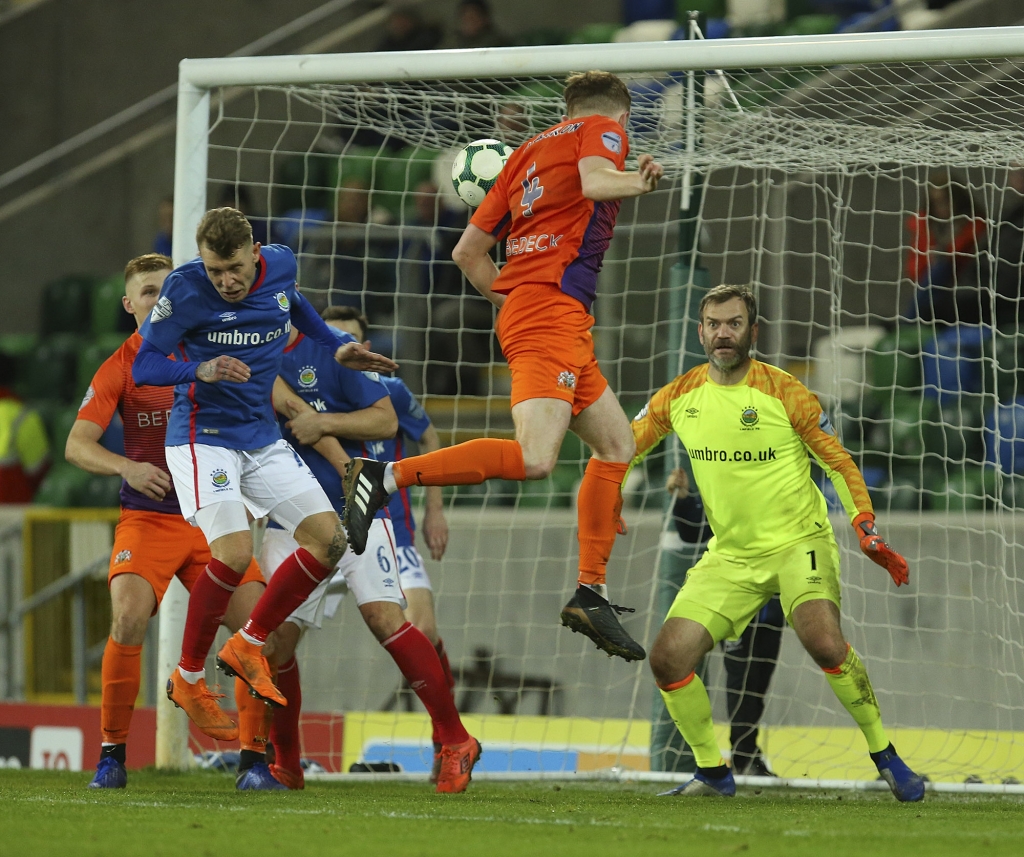 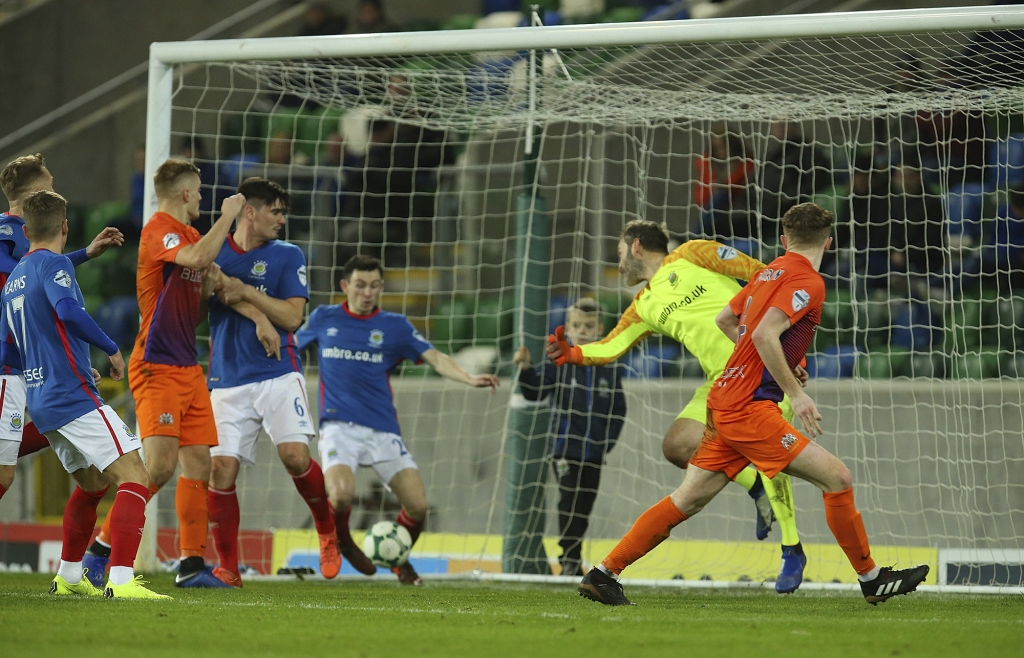 Linfield had one last glorious opportunity to win the game in the 86th minute when Kearns pulled the ball back for Cooper. The former Glenavon winger’s side-footed shot went inches past Tuffey’s left-hand post and the game finished scoreless.

The Windsor Park stalemate enabled Ballymena United to open up a four-point lead over Linfield at the top of the table with their 2 – 0 win over Ards. Glenavon remain in third place, five points behind the Braidmen. 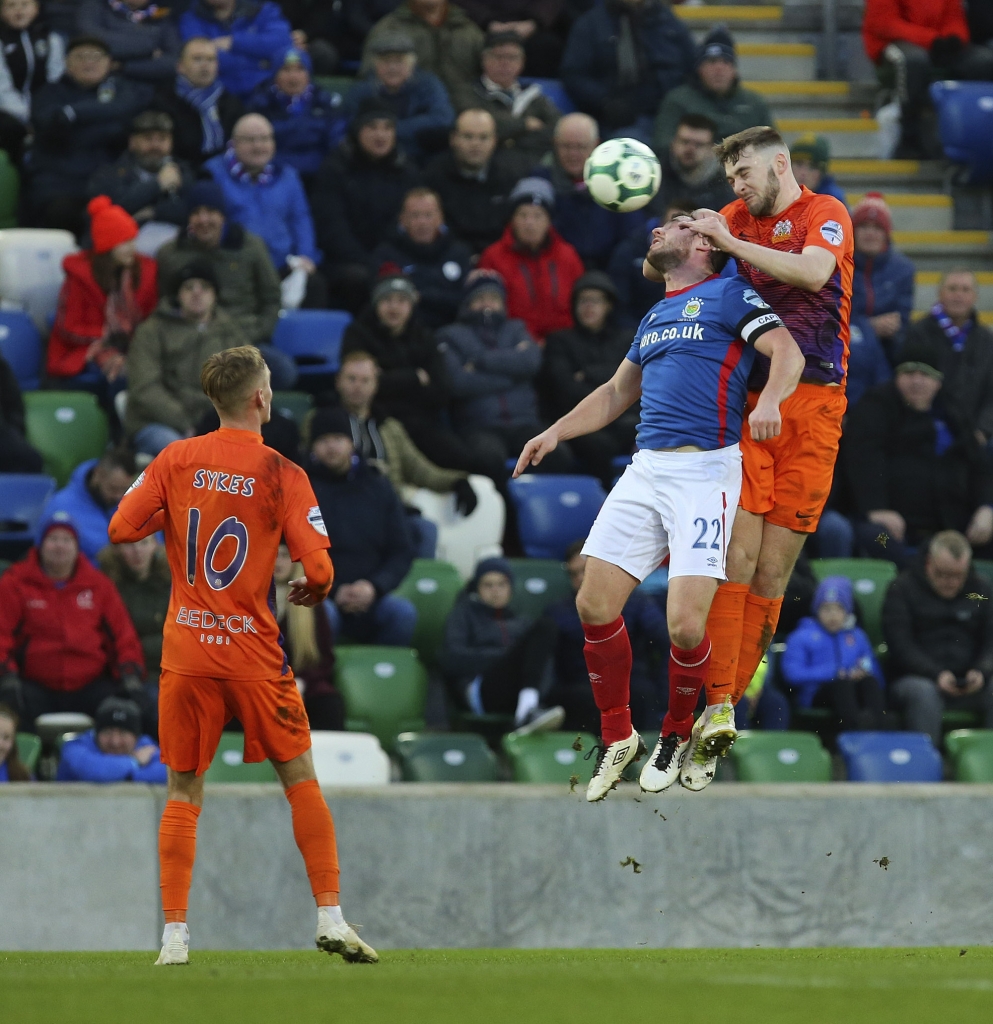