Glenavon suffered their third straight away defeat in the Danske Bank Premiership on Saturday, losing 4 – 2 to Cliftonville at Solitude.

Rory Donnelly opened the scoring for the Reds in the fifth minute, but the Lurgan Blues drew level towards the end of the first half when Conor McCloskey’s deflected shot beat Brian Neeson.

Andrew Mitchell scored for the third successive game to put Glenavon ahead in the third minute of the second period.

Cliftonville winger Stephen Garrett levelled matters with a headed goal just before the hour mark before Donnelly grabbed his second of the afternoon to put the home side back in front on 79 minutes.

Conor McDonald sealed the three points when he finished off a slick Cliftonville counter-attack to ensure the Reds picked up their first victory over Glenavon in nine matches.

Glenavon have been punished for defensive errors in recent weeks, and this trend continued on Saturday when Donnelly was allowed to ghost in behind the Lurgan Blues back four to get on the end of a long hooked clearance from full-back Levi Ives. Donnelly latched on to the ball ahead of Caolan Marron before firing a low shot past Jonathan Tuffey with his left foot to open the scoring in just the fifth minute of the match.

At the other end, Glenavon winger Josh Daniels flashed a shot narrowly wide with his left foot on 12 minutes.

The home side threatened to grab a second a minute later when Donnelly headed a Joe Gormley cross down for Garrett, but the winger fired his shot over the bar.

Neeson was called into action in the 17th minute when Ben Doherty picked out McCloskey with a cross from deep. The forward’s looped header was going in until Neeson got across to tip the ball round the post.

Neeson’s counterpart Tuffey was equal to a Gormley header at a corner on 23 minutes, while the league’s leading goalscorer was then denied by a brilliant Doherty challenge in the penalty area just a minute later when he was about to pull the trigger.

The visitors drew level on 29 minutes. Tuffey’s goal-kick was flicked on by Mitchell. McCloskey brought the ball under control before cutting inside and having a pop at goal. The ball took a wicked deflection off Cliftonville defender Jamie Harney, looping up over Neeson and nestling in the far top corner. 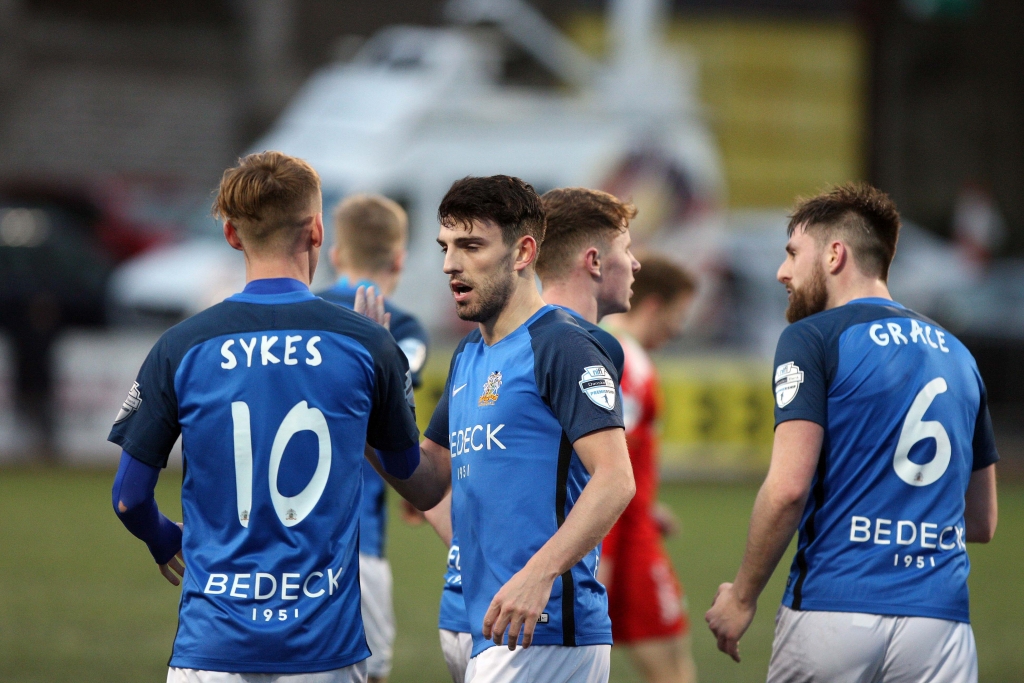 Glenavon started the second half much the brighter of the two sides and they deservedly went in front in the 48th minute. Rhys Marshall and McCloskey played a one-two before the latter fed the ball out to Andrew Hall on the right flank. The winger whipped in a superb low cross which Mitchell got on the end of, the striker doing really well to control his right-footed finish, steering the ball beyond Neeson to make it 2 – 1 to the away side. 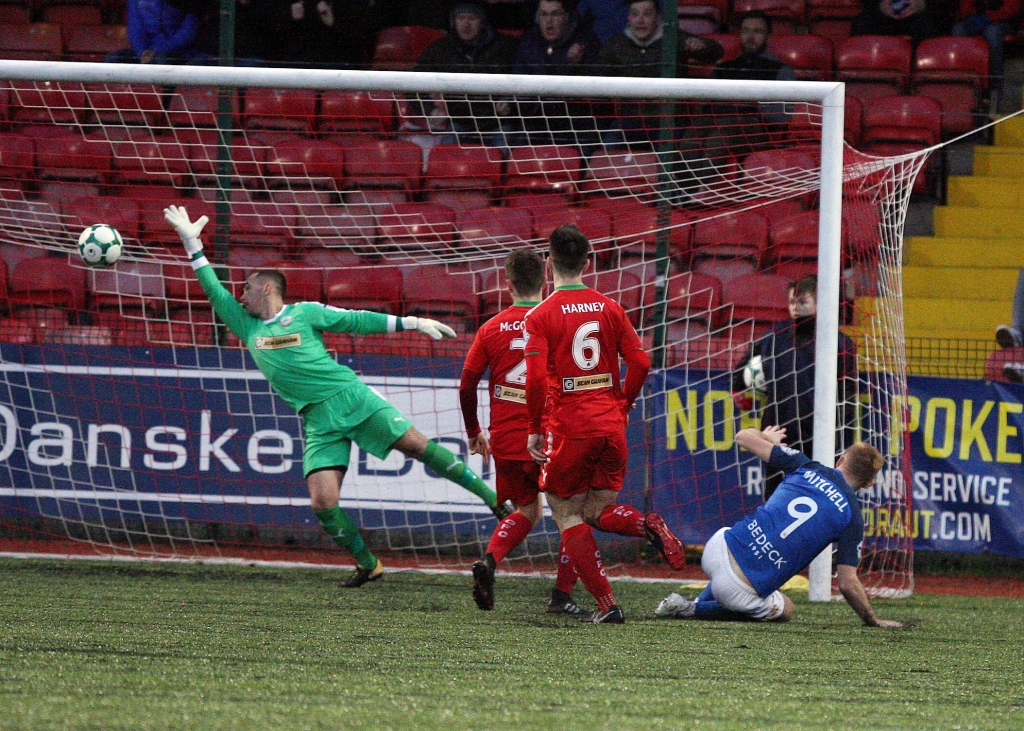 The home side came back into it as the second half wore on and they drew level on 59 minutes. Captain Ryan Catney curled a cross into the box with his right foot and Garrett powered his header into the far corner to equalise.

Glenavon thought they had regained the lead six minutes later when the ball appeared to have crossed the line following a Hall corner. Glenavon players and supporters desperately appealed for a goal but the officials were unmoved. 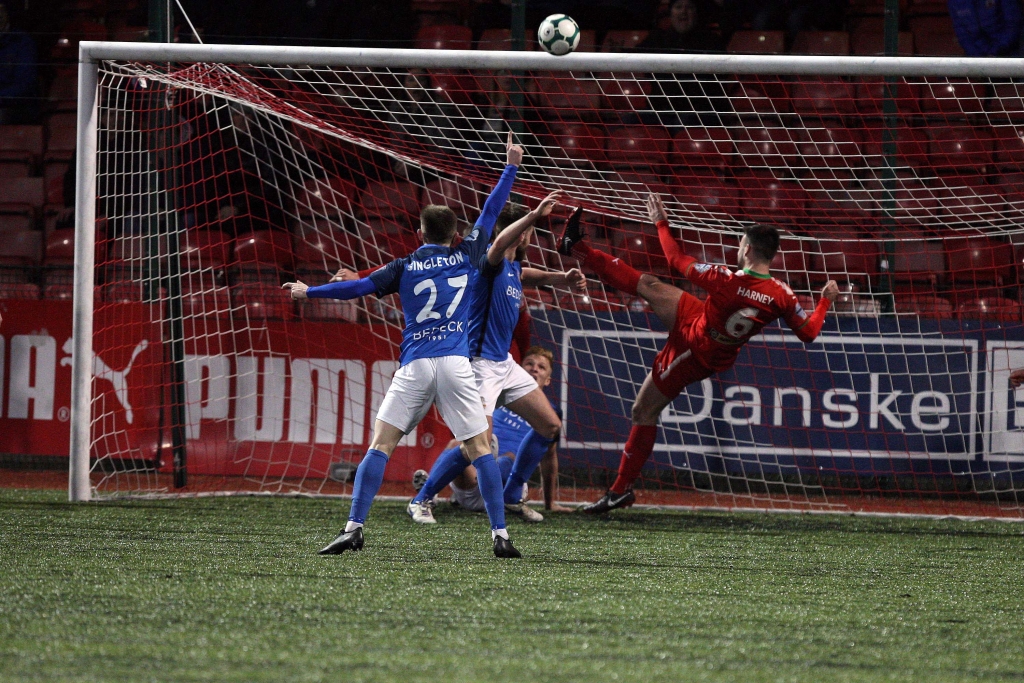 It was the hosts who went in front again on 79 minutes. Substitute Ryan Curran played the ball into Gormley, who in turn fed it inside to McDonald. The midfielder’s low shot was well struck, forcing Tuffey to dive down to his left to make the save. Donnelly latched on to the loose ball and turned it in to grab his second of the afternoon and Cliftonville’s third.

Glenavon went in search of the equaliser, but they were dealt a hammer blow when Cliftonville counter-attacked following James Singleton’s header being blocked at a corner. Curran played an excellent through-ball with the outside of his right boot to send McDonald clear and the midfielder made no mistake, slotting the ball past Tuffey with his left foot to seal the three points for the Reds and move them above bitter rivals Crusaders into fourth place in the league table. 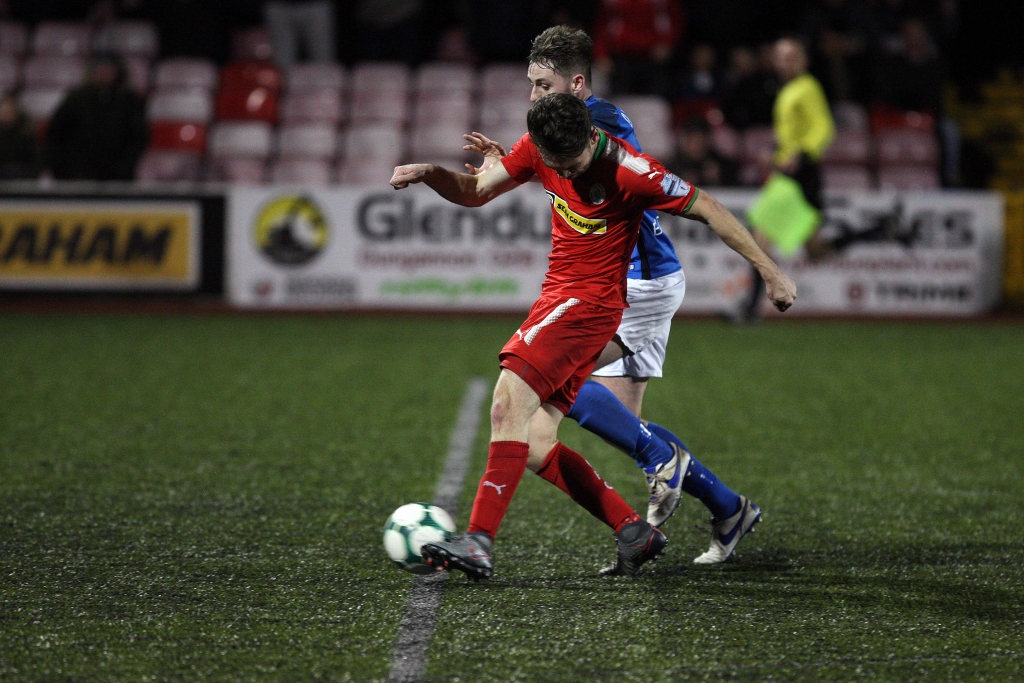 Glenavon’s defeat saw them lose ground to the top two, Ballymena United and Linfield, and the Lurgan Blues now sit four points behind David Healy’s side and six points behind David Jeffrey’s. They do, however, still have a game in hand over both teams.