Gary Hamilton has moved to bolster his defence by signing Sligo Rovers central defender Seamus Sharkey. With the departure of Simon Kelly shortly before the beginning of the season and the long-term injury to Andrew Doyle, Hamilton has found himself with only two fit centre backs. 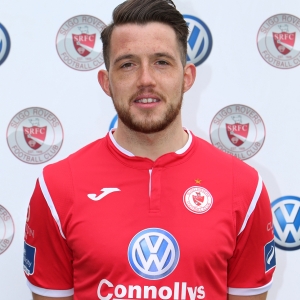 “I’m delighted to get Seamus at the Club and with his experience in the League of Ireland, he’s a good player who should bring a bit of experience and add to us in January when he’s available to play,” Gary told the website after Saturday’s game.

The 28-year old, who was born on the Isle of Man, previously played for Derry City and Limerick and joined Rovers in June 2017. He has signed a two and a half year deal with Glenavon.