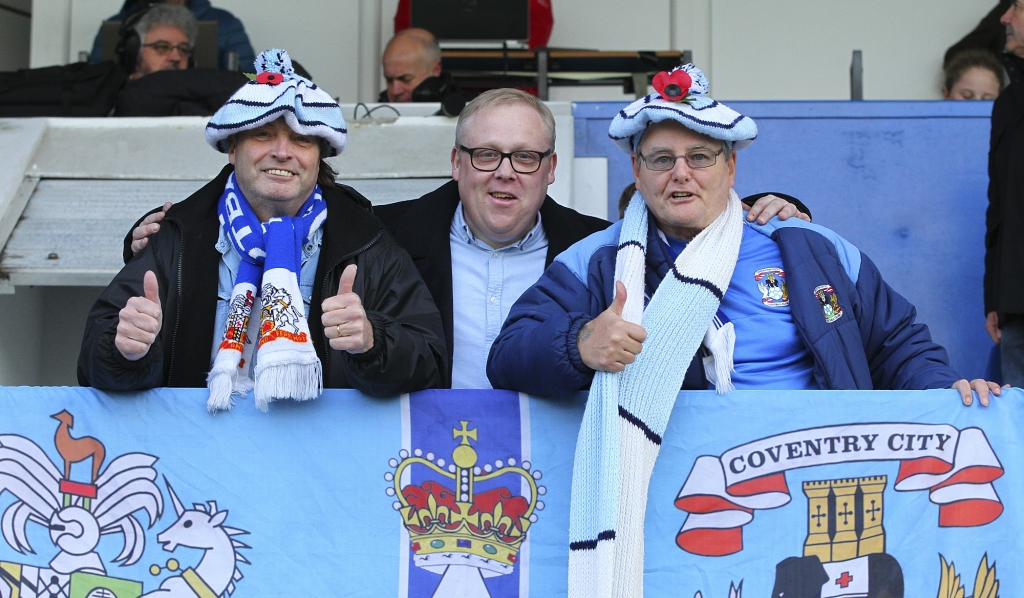 Manager Gary Hamilton was left frustrated as his Glenavon side was held to a draw by a resolute defensive performance by Warrenpoint Town but the Lurgan Blues moved a point clear of Linfield at the top of the table as the Blues lost 2-1 at Windsor Park to Coleraine.

Glenavon began with the same starting line-up from last week’s defeat to Ballymena and started with the look of a team that was determined to get back to winning ways. In the early exchanges Mark Sykes dragged a shot wide and Stephen Murray couldn’t quite stretch enough to get a more decisive touch to Andrew Mitchell’s flick on in the 6th minute.

Two minutes later and Glenavon felt they should have had a penalty when it appeared that Point keeper Alex McCarey impeded Stephen Murray as he tried to get to Mitchell’s headed effort that ended up dropping invitingly at the far post. 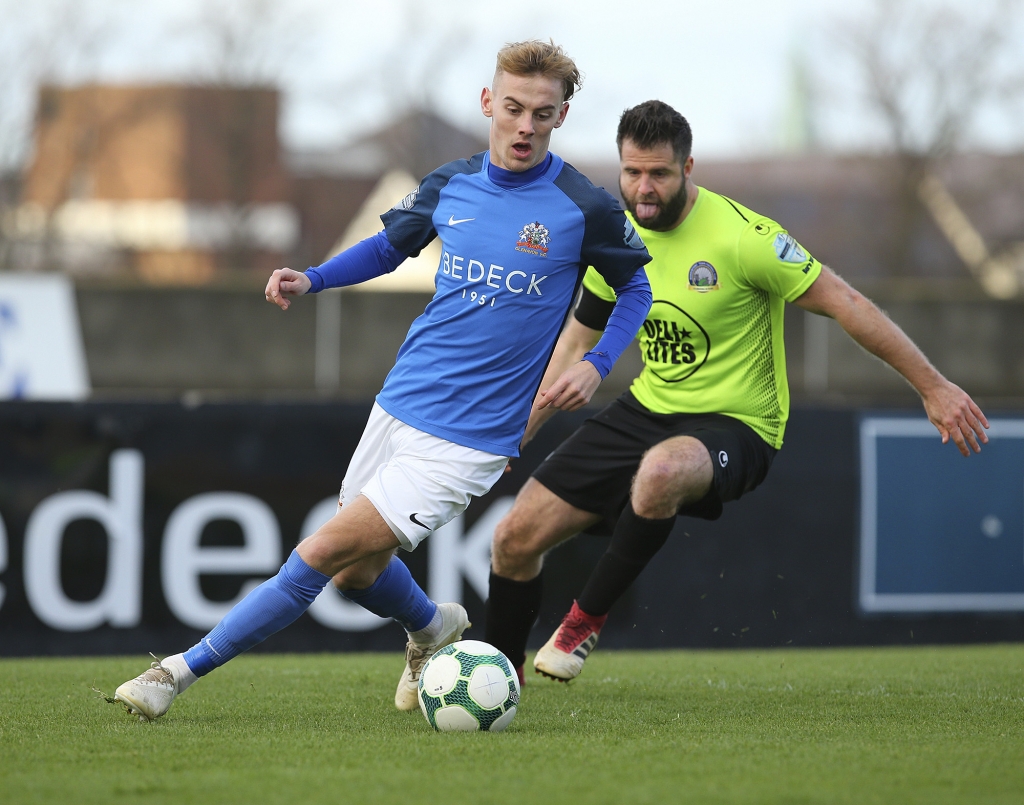 Simon Kelly then cleared James Singleton’s header off the line at the expense of a corner which Rhys Marshall headed over the bar from 8 yards. A cross from Sykes was only cleared as far as Ben Doherty just outside the box but his effort failed to trouble Aaron McCarey.

The Point keeper then collided with Mitchell as he came outside his area, the referee stopping play as McCarey appeared to need treatment, the play restarting with a bounce ball.

As Glenavon continued to attack, the referee decided that a challenge on Mitchell was not a foul and the visitors broke down the left with Eamon Scannell. His cross to the far post beat Caolan Marron and Philip Donnelly powered home a diving header to give the visitors a lead in the 18th minute, against the run of play.

Three minutes later Andy Hall sent a dangerous low cross fizzing into the goal mouth where Mitchell looked likely to score with a stooping header from close range but for the bravery of Anton Reilly who got his head to the ball and diverted it over the bar for a corner. The Point defender came off worst as both players heads came together and was carried off on a stretcher after several minutes of treatment on the pitch. We hope that Anton makes a full recovery. 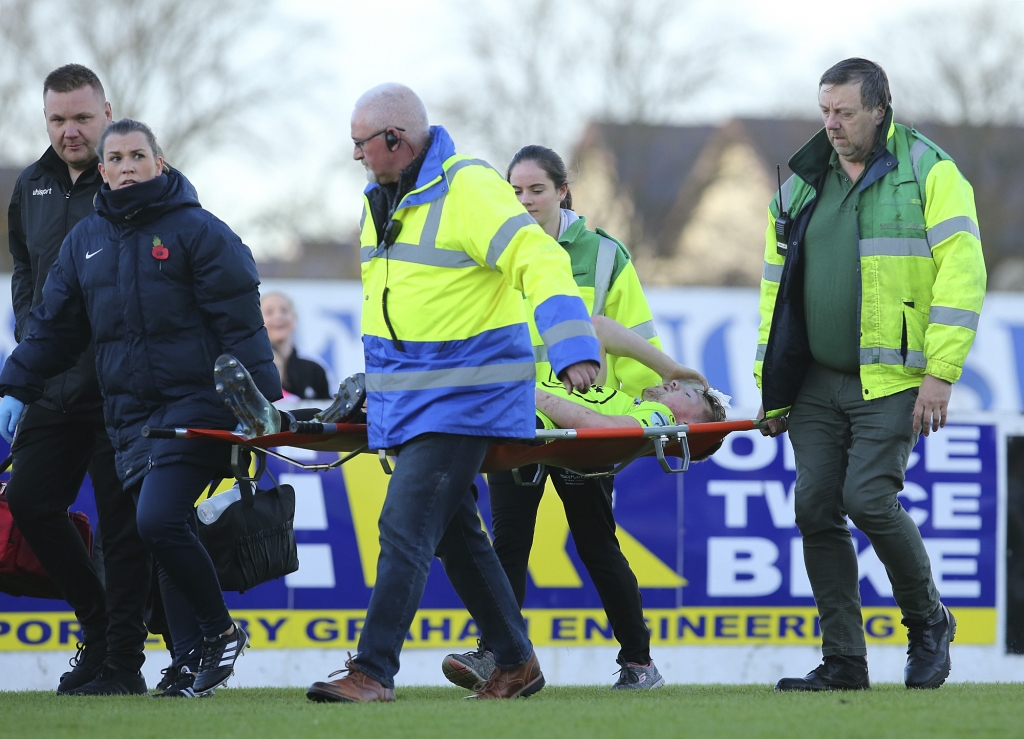 Conall McGrandles replaced the unfortunate Reilly and it was the substitute who was adjudged to have brought down Marron in the Point box after 36 minutes when a free kick by Hall put their defence under pressure and referee Lee Tavinder pointed to the spot. Murray stepped up but McCarey went the right way and saved the striker’s spot kick. 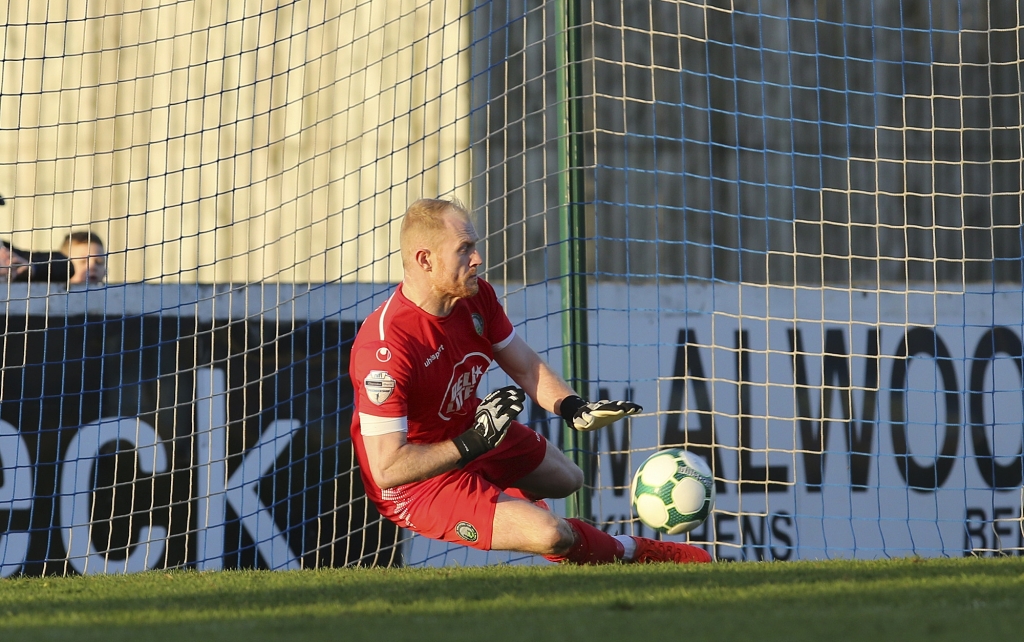 As half time approached the visitor’s defence again showed the spirit and determination they had displayed against Linfield with Danny Wallace getting back to clear a Sykes cross out from under his own bar but two minutes from the break Glenavon finally got the breakthrough. Marron stole the ball in midfield and fed it to Hall who in turn found Marshall. He slipped a pass through to Sykes and his shot spun up off a defender, wrong-footing McCarey with Murray ghosting in at the far post to tap in for his 10th goal of the season. 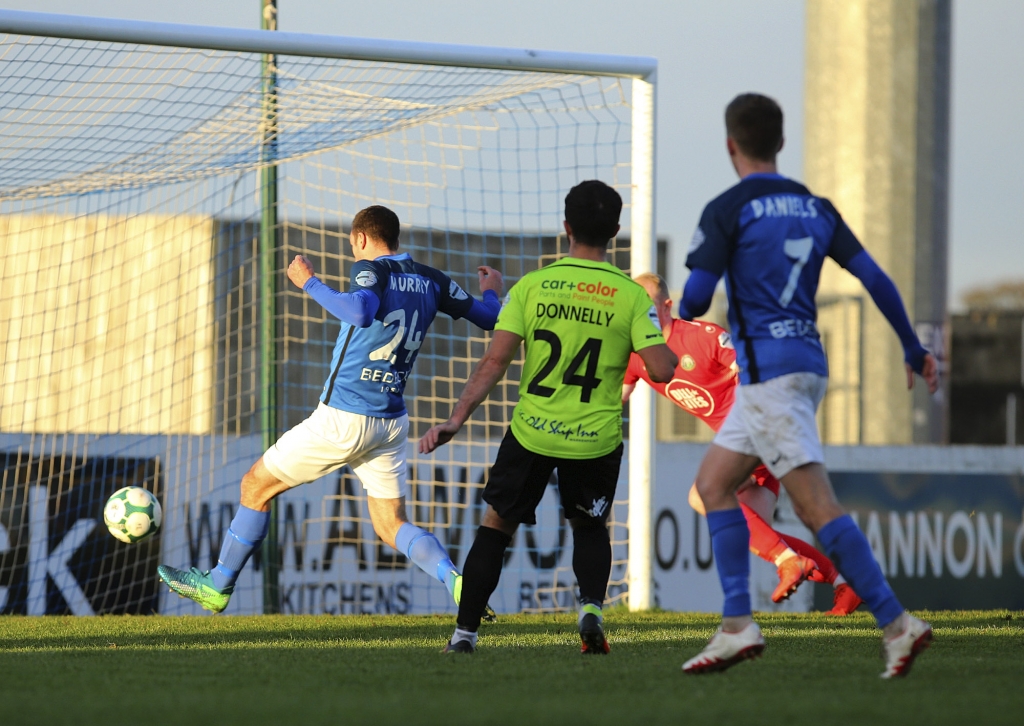 Francis McCaffrey replaced Dean Watters at half time and he was involved in the build up that led to the goal-scorer Donnelly smashing a shot off the base of Jonny Tuffey’s right hand post just two minutes into the second half. McCaffrey was then denied by a superb save by Tuffey who also reacted quickly to keep out Scannell’s follow up effort before McCaffrey was flagged for offside.

Sykes then ran for half the length of the pitch with the ball appearing to be glued to his toes but alas he lost his balance just inside the opposition box and fell over as he tried to poke it through to a teammate.

McCarey parried Doherty’s drive out before Hall released Murray down the right with a flick on and the former Warrenpoint striker delivered a delicious low ball across the six yard area that just needed a touch from Mitchell but he couldn’t quite apply the finish under pressure from a defender.

Marshall then surged into the box and slipped the ball to Sykes who twisted and turned before seeing a shot deflected out for a corner which was eventually scrambled clear with Warrenpoint defenders desperately flinging their bodies in the way of the ball.

Looking for the win, Hamilton brought on Sammy Clingan for his first league appearance of the season, Daryl King going off and Glenavon going to a back three. Clingan immediately showed his class and experience with the calmness we’ve come to expect from the former International but the first chance since he took the field fell to Marron who headed over from the centre of the goal as Mitchell sent in an in-swinging corner.

Clingan then sent a tremendous 30 yard drive arrowing towards the top corner only for McCarey to get just enough of a touch to turn it onto the post and away for a corner. 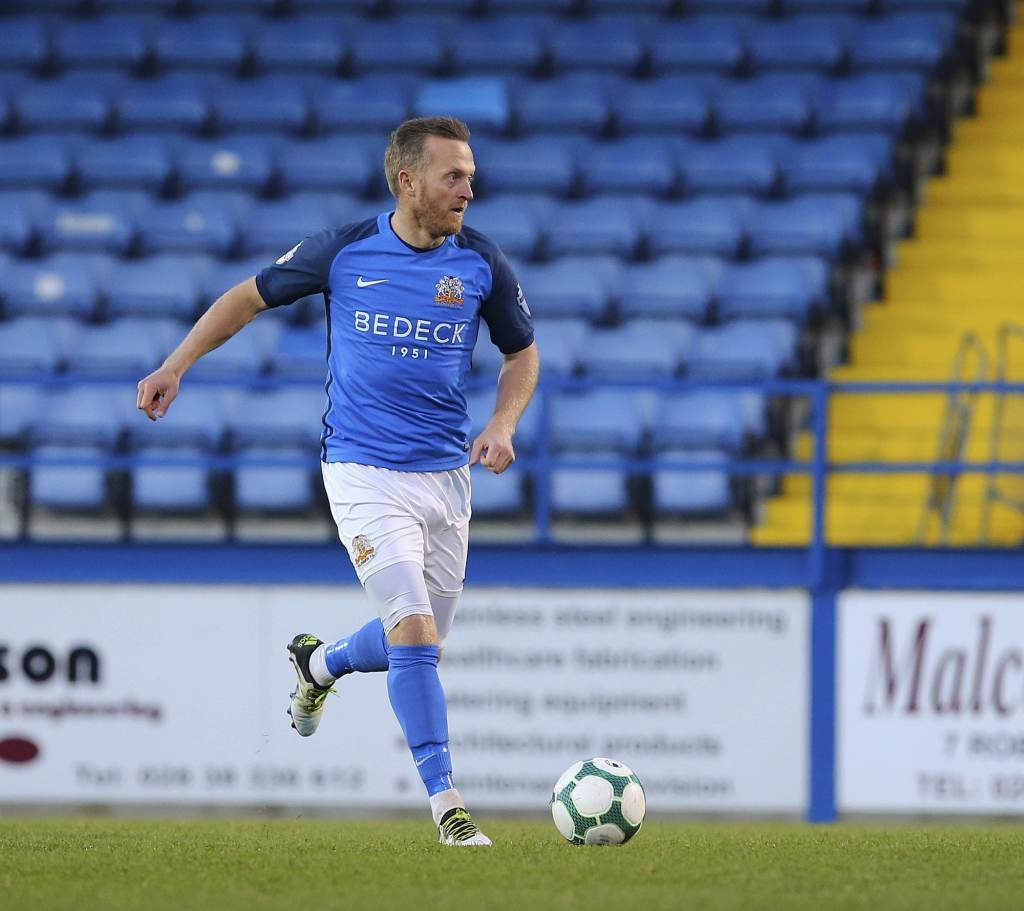 In the 78th minute Murray went down in the box but the referee waved away any possible appeals for a second penalty. The big striker was in the action again moments later after Hall headed on Clingan’ s measured diagonal ball into the Point box and he may have felt he had a case for another penalty as he and the keeper collided as they went in for the aerial challenge, the referee presumably adjudging that McCarey had got his gloves to the ball rather than Murray’s head. 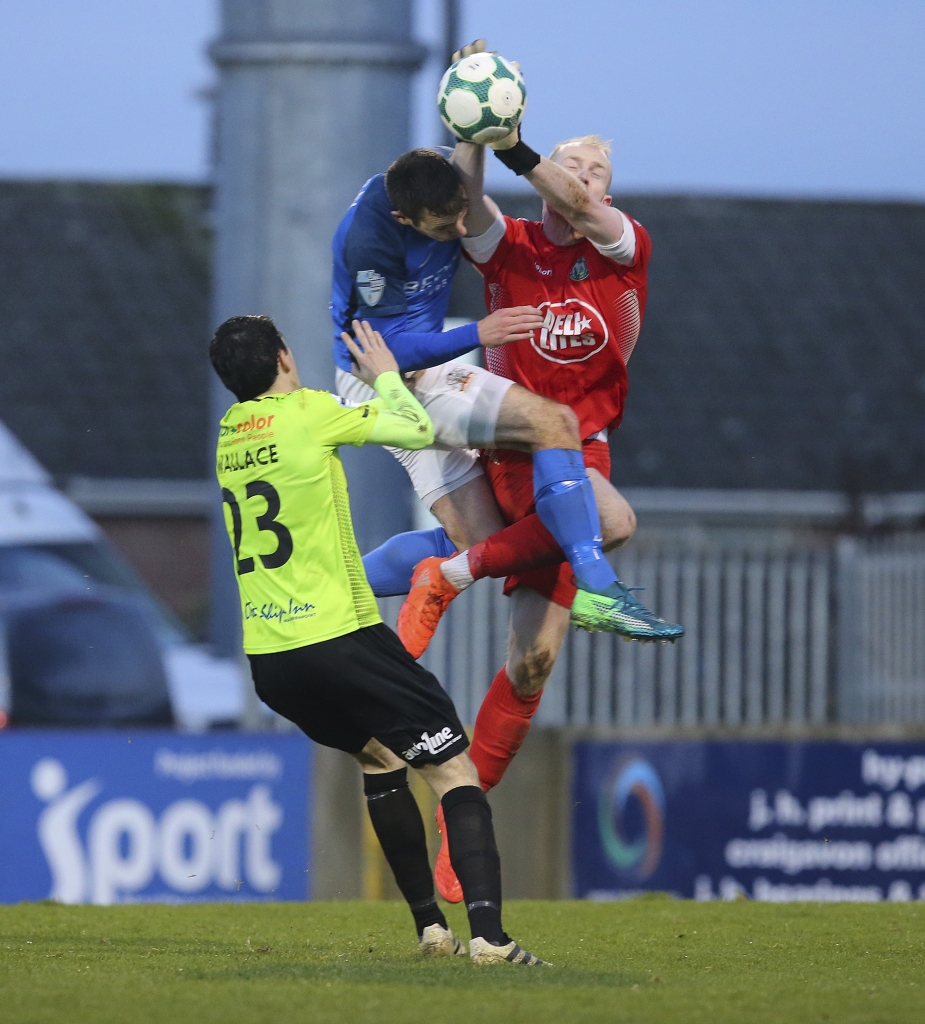 As Glenavon continued to press for the winner McCarey pulled off an even better save than the one from Clingan when he got the slightest fingertip to a wonderful dipping shot from Josh Daniels who must have thought he’d grabbed the winner only to see the ball crash off the bar thanks to the keeper’s touch.

Although disappointed not to take all three points today, who knows how important, one way or another, today’s result could prove in the long run? Meantime, Glenavon’s next challenge is a trip to Seaview to take on Crusaders next Saturday 17th November.